Review: Being and Becoming

The Complex Identities of Africa

Just in time for Africa Day, the exhibition Being and Becoming opened at the Unisa Art Gallery in Johannesburg as part of the !Kauru African Contemporary Art Project. It dealt with the multilayered perspectives in perceiving the continent.

Any inquiry on Africa’s being and becoming tends to find itself entangled with the fact of the continent’s timeless disavowal. A habitual negation, ever present, even when attempting to evade its imposition by appealing to such phrases as “in spite of.” As part of the fifth edition of the !Kauru Contemporary African Art project, curators Paula Nascimento and Raphael Chikukwa’s group show, Being and Becoming at Unisa Gallery brings a labyrinth of new media works querying ideas of African identity.

It is a predominately video and photography show, with artists whose works are already circulating in the global art situation. In its publicity release the curators ask: “If the only constant is change and becoming, how do we construct our ever-evolving understanding of what it means to be an African?” There’s a tentative tone here that appears unmindful, but it nevertheless raises important questions.

It invites us to ponder on the probability and urgency of forging new and unorthodox ways of seeing and being African. It queries the recycled significations that cast Africa either as a ghostly extension of its colonial masters or the exotic interspace between presence and absence. 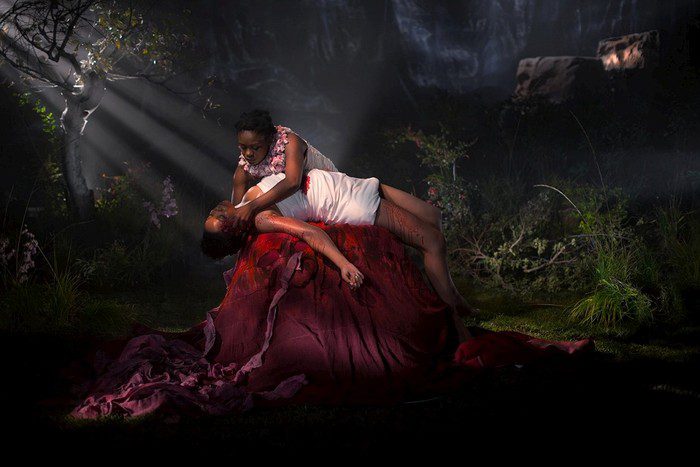 This can be a daunting task especially when the fate of such an object of inquiry is already scripted within the multiculturalist functioning of “the system.” It makes us enter the gallery with a constant sense of unease about the performative reach of contemporary African art and its capacity to circumvent coercion.

Upon entry, a chilling sound echoes through the space. It is a voice from the video piece by the Angolan artist, Nástio Mosquito, shouting: “Fuck Africa!” Certainly a startling welcome! On occasion, this overbearing voice is redolent of the exhibition’s trajectory, especially the decision to display so-called non-traditional media. On its own, it complicates ideas about African identity and art, and demands a more nuanced reception.

Inside this maze of video art in dark cubicles, concavely bordered by a wall of further photographic works, the pieces offer more interesting representations of identity and identification. They refuse to answer or yield easily to the brief.

Titled Fuck Africa, Mosquito’s video portrays a bespectacled, Black, conceited character, casually dressed and telling an imaginary audience about how he owns Europe, America, and wants to sodomize Africa. A swathe of intriguing collages of images repetitively interrupts his frame. We see an intricate visual display of politicians and sites of punishment, and the stock market invades the crimson screen, intersecting with this tyrannical snobbish voice. Here, rather humorously and quite crudely, Mosquito renders once again the obscenity of the shared global sensibility towards Africa.

This non-equivalent singularity of Africa’s experience, inextricably bound to violence, possesses the show in various degrees. Works such as Louis Kibafika Kakudji’s video Drive by Shooting, Thando Mama’s The Forgotten and Mudi Yahaya’s Conrad Circus Trilogy draw a straight line of historical violence and caricature into the present. Such pieces, as sampled patchworks from the visual archive, negotiate the prospects of identity within this disemboweled space of vulnerability, invisibility and terror.

On the whole, questions of African identity and identification are not anachronistically situated in a different time and space, protected from the wrath of history. We are talking about a persistent legacy of the disfiguration of place and the body, and the body from its place. There is a centrality of the body in it place and as an extension of place, or place as a presupposition of the presence of the body. 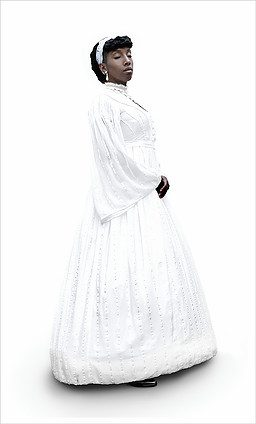 This undeviating thread can be contiguously traced even in the everyday examples shown in Lerato Shadi’s Matsogo or Helen Zeru’s three videos. Here, everyday life, even in its banality, is not seen as an unaffected paradise camp. More interestingly, in images such as Edson Chagas’ Tipo Passe series and Ayana V. Jackson’s Dear Sarah series, the geography of the body, sometimes unbecomingly bound, becomes an abode that  lays bare and re-orientates masks and marks.

But it is in Moyo, a video by Kundzanai Chiarui relating to Christianity that shows a  pieta with Black figures, that we see vitiated Black suffering in the way in which it displaces the anguish into a metaphor. The irony in this iconological depiction relies on the problematic assumption that the melancholic affection the world gives to the familiar figure of Christ can be easily mobilized in a Black context.

Altogether, Being and Becoming raises crucial points for helping us to rethink the still opaque category of identity in a different way. Not as a non-situated experience, or as part of the empty promises of representation, but by deepening the critique of the persistent logic of terror and demonization of the Other, an inexorable by-product of the modern world. Africa and its identity can only be or become at the moment when it begins tackling this problem.

Athi Mongezeleli Joja is an art critic, writer, and researcher. He is also a member of the arts collective Gugulective. His writings have appeared in numerous publications and exhibition catalogues including Savvy, Chimurenga, and The Feminist Wire. He is an assistant editor of the publication New Frank Talk: Critical Essays on the Black Condition.