The Blackbody Against the Green Screen

In his blackbody series, the Botswana artist Thebe Phetogo pulls references from his immediate Lagos surroundings while drawing inspiration from pan-African modernist masters.

For his inaugural solo exhibition in Nigeria, Thebe Phetogo has created ten new paintings in his blackbody series, made during a residency at Arthouse Foundation, in Lagos, in the first quarter of 2020. This exhibition follows numerous group exhibitions in South Africa and in his native Botswana.

Phetogo’s operating framework gathers together techniques, theory, and history absorbed from a variety of disciplines. The lime-green hue throughout this series references the chroma of greenscreen technologies, which are commonly used to combine videos and images in cinematography. Another starting point is the scientific philosophy of a “blackbody” in physics, which is defined as an idealized surface capable of absorbing light of every wavelength. The paintings incorporate multiple bodies that float within an imaginary greenscreen space, in varying degrees of translucency and opacity. The characters and actions in Phetogo’s paintings often allude to specific popular culture and art historical references, and here they create a consistent thread throughout the series. 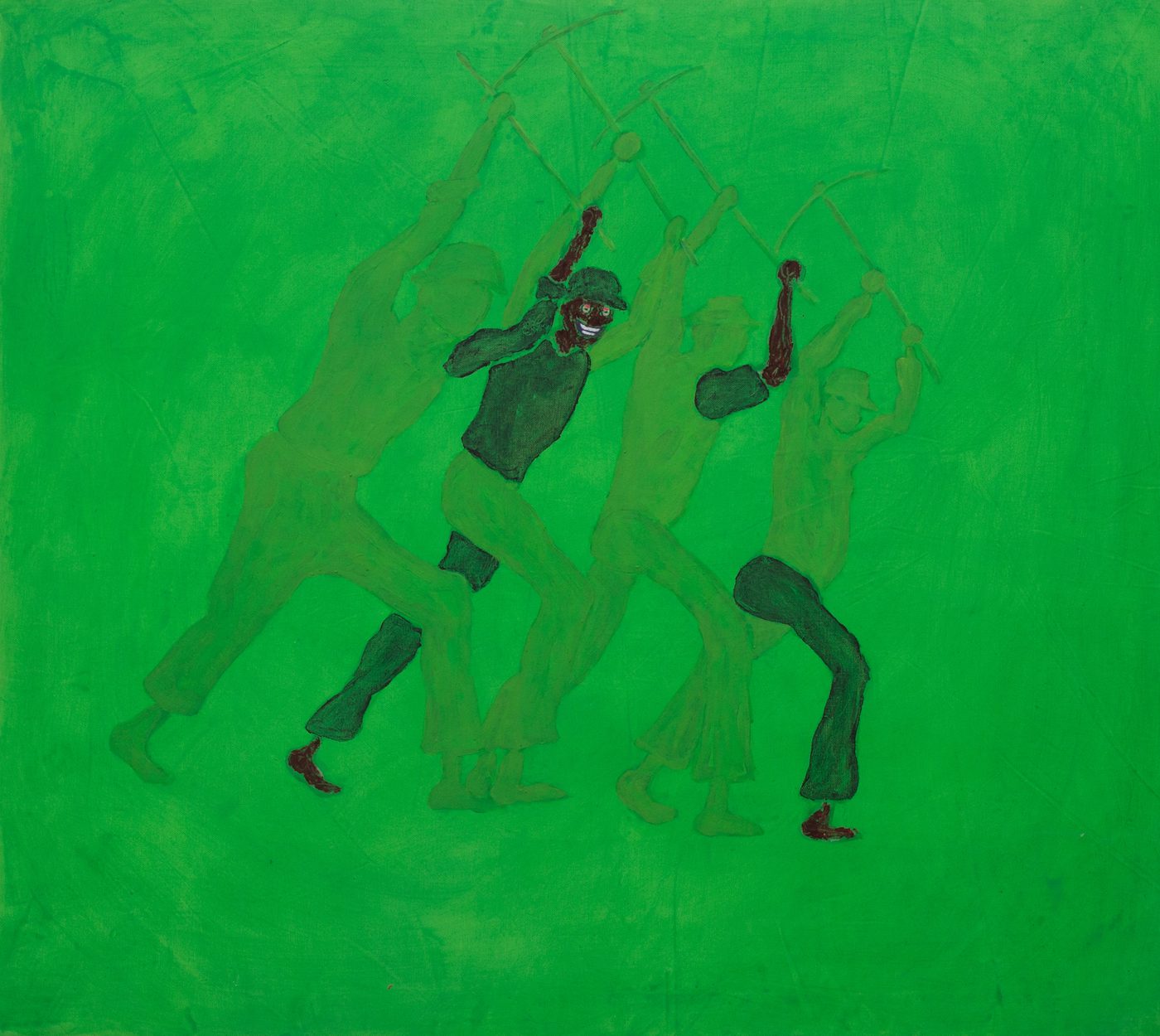 Action painting may be rooted in abstract expressionism, but Phetogo’s use of the term to describe his new series is to account for the physicality of his chosen figures. In blackbody Composites (Song of the Pick), Phetogo depicts four men digging into the ground in concert. The agility required for menial labor is celebrated but the work’s simultaneous critique of the “true value” of organized labor cannot be avoided. In this work, Phetogo was inspired by a 1946 painting by Gerard Sekoto, the South African master modernist. Sekoto’s work, itself based on a photograph by Andrew Goldie, evinces an oppositional tension between a white colonialist and indentured Black workers with their backs and shoulders to the viewer. “Compositionally, I like how the figures sit and recede in terms of perspective and thought it would be a useful jumping-off point for my purposes,” Phetogo explains. But in his version, the power-holder is left off the canvas while the workers are in profile, drawing urgent attention to their graft and its contributing conditions. Its truth was augmented by a cluster of working men on a construction site that the artist could see from his window during his residency in Lagos.

In blackbody Composites (Back to back), Phetogo references a 1974 print by Nigerian modernist artist Ben Enwonwu. Enwonwu’s depiction of two women with their backs to each other and their hips pressed to form a “V” shape is a common form in his Africa Dances series. But it is Enwonwu’s paintings of Igbo masquerades which draw the stronger allusion and which, in Phetogo’s rendering, has the two women transmogrified into celestial forms. Phetogo learned more about Enwonwu’s practice during his residency in Lagos, through art catalogues and exhibition materials, and he incorporated these patterns into his visual vocabulary. 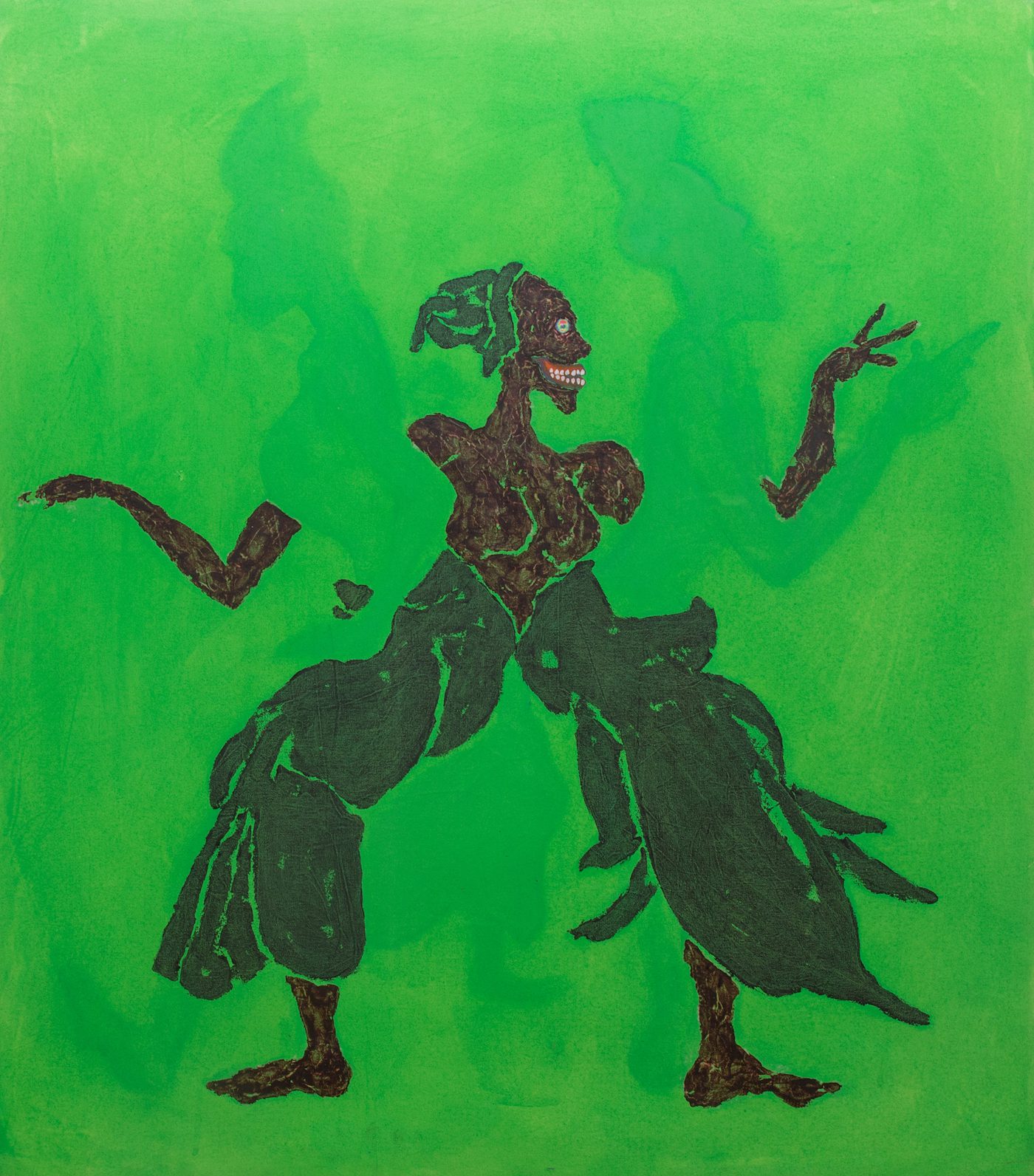 In blackbody Composites (In Protest), Phetogo’s exploration of the composite image finds new relevance for a photograph by Santu Mofokeng, the great South African photographer who recently passed away. The image is that of a disparate group of men and women, children, and adults – a determined set, with fisted hands and, in one case, a heel up in the air. Phetogo was in the first month of his residency at Arthouse Foundation when Mofokeng’s death was announced. Poring over his works as a ritual of remembrance, Phetogo found that one photograph of a protest march stood out. He reconstituted Mofokeng’s unflinching blacks and whites into his own assertions of blacks and lime-greens.

Phetogo’s rendition of this documentary photograph is specific to the history of apartheid South Africa, but its echoes are amplified by recent protests championed by the Black Lives Matter and End SARS movements against state-sanctioned violence in the United States and Nigeria respectively. For one, Phetogo’s depiction of hyper-blackened faces suggest a direct critique of the tradition of minstrelsy that gained popularity in the US in the nineteenth century. These protest movements have drawn worldwide attention and continue a struggle shouldered by multiple Black polities against the law and its attendant factors of socioeconomic disenfranchisement. Phetogo comments on the work’s connection with the present: “It is a painful reminder that these things are so cyclical that the painting now has a relevance you can point to.” 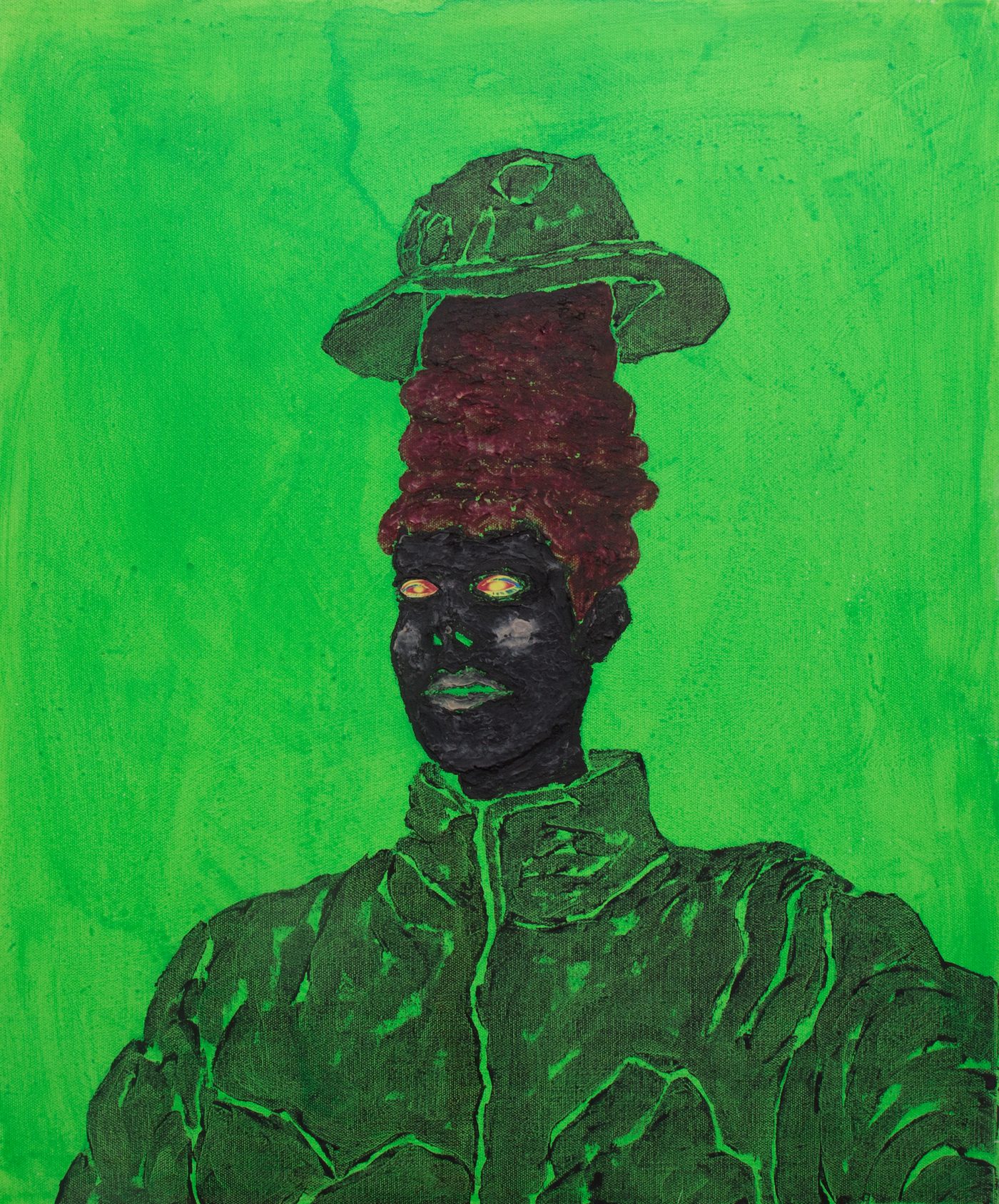 The two “untitled” works in the blackbody series are paintings of Nollywood film posters. In each, costumed characters affect composure and elegance in self-conscious poses. They are an instinctual selection of images, chosen not specifically to fit the theme but to be engineered through the mechanics of making that Phetogo has configured. In his chosen metaphor: “I’m a forager, not a farmer. So with my painting I work with a framework or rubric that I can apply to different projects as I conceptualize them. This allows me to paint what I want or what piques my interest (figuration, abstracted landscape, portraiture) but within a self-defined set of parameters.”

If a fascination with intensive colors is strongly evoked, its functionality is paramount, employed to realize the artist’s mix of ideas. The resulting paintings are imposing and cohesive but not final. Phetogo’s frameworks allow for continuous experimentation with ideas, colors, and philosophies, as he filters and reinterprets the history and culture around him.

Thebe Phetogo, Blackbody Composites is on view until 12 November 2020 at Kó, Lagos.

Sabo Kpade is writer, journalist and a Fellow of Global Arts and Cultures at Rhode Island School of Design (USA). Previously, he wrote for Okay Africa, Guardian Newspaper Nigeria and Media Diversified.