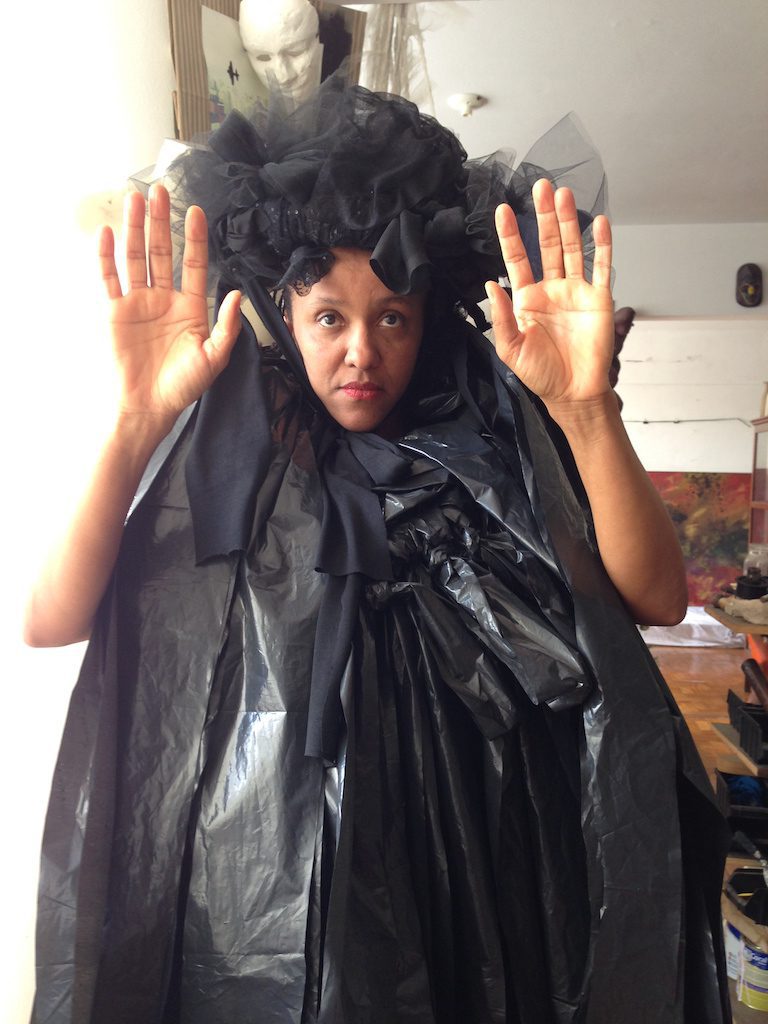 Artist Lidia Lisboa in her studio, wearing one of her creations. Courtesy of the artist
1/1
1/1

The Art of the Black Atlantic II

Founded in 2007, O Menelick 2° Ato is a publishing project focusing on Afro-Brazilian popular and urban culture. C& talks to one of the editorial members Alexandre Araujo Bispo...

C&: Please give us an introduction to the publications O Menelick 2ºAto and A Presença Negra.

Alexandre Araujo Bispo: Whereas O Menelick 2ºAto is a publication, A Presença Negra (The Black Presence) is a political collective action aimed at inviting Black artists and the general Black public to be present in spaces that historically and symbolically have been perceived as off limits for them. A Presença Negra responds to that perception of absence. Its manifesto was published in the same issue of O Menelick an article of mine about Moisés Patricio, one of the artists of the collective, who appeared in. His work has been discussing the scenario of democratic expansion in the country that started in 2003, the same year Luis Inácio Lula da Silva was elected president. 2003 also marks the year of the introduction of law no. 10.639/03, which made it mandatory to teach African and Afro-Brazilian history in elementary and high school, as well as elaborating on the contribution of people of color towards building Brazil. In 2008, this law was modified to also include the indigenous population in all its diversity and became law no. 11.645./08.

Observing the changes in society, I believe that the emergence of forms of expression such as our publication or a collective action such as A Presença Negra, but also the Manifesto Crespo, Grupo Os Crespos, and other groups and manifestations, need to be analyzed in the light of the transformations taking place within the country’s fragile democracy. The fact that O Menelick recently started receiving public grants shows that the present climate is more open to these changes.

AAB: I agree with Renata (Felinto) in that this is a very generic and broad question. I believe that the so-called Brazilian artistic landscape is mediocre when we consider that even in a megalopolis such as the city of São Paulo, there is a lack of alternative spaces where the city’s many artists could have their work exhibited, where they could discuss it and discover their strengths. Artists whose bodies of work deal with blackness itself face even greater problems. It is difficult to talk about Brazil’s artistic landscape, even though the digitalization of media has resulted in a greater visibility of works that before were not exposed to any circulation at all.

C&: What are the challenges for Afro-Brazilian artists in the contemporary art scene? To which extent is the lack of representation linked to Brazil’s history, especially in terms of slavery?

AAB: The links with the past are inevitable, therefore artists like Rosana Paulino, Sidney Amaral, Thiago Gualberto, and Jaime Lauriano make explicit reference to it in their work. Lauriano is among the most aggressive in his approach, revisiting the past continuously, which lends his work a certain intensity. Among the white artists, we should not forget to mention Adriana Varejão, one of the most highly payd artists in Brazil today, whose work looks at this past.

C&: How do you see your role as a Black cultural activist in Brazil and its Diaspora?

AAB: I write about artworks that touch me, works that move me. And I try to interpret them by establishing a dialogue with the artist’s social environment and the democratic opening we are experiencing in Brazil. My activism consists of trying to provide an interpretation since, as we know, much of what we see as art history today, started out as a critical reading of works.

Artist Lidia Lisboa in her studio, wearing one of her creations. Photo by Fabiana Lopes

C&: Please tell us about some Afro-Brazilian artists and projects that you find inspiring. Where are they mainly based? Which alternative means and spaces are essential for their work and how do they empower themselves and thrive?

AAB: For me, Ayrson Heraclito and his Ebó Art or the art based in his experience as a practitioner of Candomblé is among the most powerful expressions we have. More than a few  Afro-Brazilians disregard the  religious values and philosophical and moral approach of Candomblé. Like other artists before him, Heraclito adopts the Candomblé religion as an interpretative system, opening up a wide range of possibilities, since Candomblé is fundamentally different from other religions, starting with the fact that women, trans and queer people are able to assume the role of the leader. Ebó Art can also be extended to Moisés Patricio’s work, since the artist finds inspiration in the religion of the Orishas and brings to life actual ritualistic settlements in his series Aceita, which he has been working on since 2013.

Another artist that I find powerful is Paulo Nazareth. My interest in his work lies in that he questions the colonial issue through the body, placing it in the world and thereby questioning geo-political boundaries. Nazareth is from the state of Minas Gerais, just like Priscila Rezende, who through her body brings to the forefront issues of labor and domestication of Black women. In Brazil, Black women have been historically assigned to an unmovable, fixed, position in the power structure, an issue also addressed expressively by the artist Rosana Paulino.  Finally, I believe that works such as Renata Felinto’s portraits afroretratos and her performances are very powerful. The performance White Face and Blond Hair is worth taking notice of.

C&: What do you think the role of artists and cultural producers should be?

AAB: I believe that we need to study, to acquire knowledge, so as not to go around saying things like I heard at a panel discussion at the Emma Thomas gallery with artists Jaime Lauriano, Peter de Brito and Rodrigo Bueno, hosted by Renata Felinto. Someone in the audience compared the US to Brazil, saying that over there nobody burned documents, that everyone there knew where they came from, whereas here, after Ruy Barbosa (an abolitionist) had burned documents, we had lost our history. This cannot happen anymore, this evident lack of recent historiographical knowledge, when so many historical documents are available for study. There is a serious issue here, and for me, it has to do with education. In a capitalist society, education is what allows social mobility, empowerment. Even Paulo Nazareth, who questions the precariousness of the world, of the body, with his dirt feet, he is able to do so because he attended the University of Minas Gerais, I believe. It is through a public university, through studying texts, artistic publications and art history that he is able to advance his project of a geopolitical hermit who breaks linguistic and cultural barriers.

C&: How do you collaborate with other Black artists or artists of African descent, with creative networks in the Americas and on the African continent?
AAB:  Because I have other commitments, including completing a doctorate, and with a full-time job, working over 40 hours a week, I tend to use O Menelick as a platform to post my considerations about these artists. I enjoy Facebook and, at my job, I try to open up doors for Black interns, especially women, whose reality in Brazil is as tough and even tougher than Priscila Rezende’s perfomance shows us. My most recent work involves the exhibition Medo, fascinio e repressão na missão de pesquisas folclóricas 1938-2015 (Fear, Fascination and Repression at the Folkloric Research Mission 1938-2015), where I try to show how the police in the Estado Novo/New State (1937-1945) acted against religions of African descent in Brazil.

C&: What is your vision in terms of making Afro-Brazilian art and voices visible/heard?

AAB: I would like to join Jaime Lauriano in saying that right now we need to establish ourselves first and foremost as Black or Afro-Brazilian artists. Maybe later on in the process we will be able to talk about a “post-Black” or “post-Afro” artistic production. For now we need to critically develop the category of Afro-Brazilian art. In my opinion, Afro-Brazilian art can be defined by themes, the artist does not have to be Black, such is the case of Carybe and Pierre Verger for instance who live in Black environments; another way to define it is by the social experience, or by the corporeal experience of being Black, as it is the case of many of the artists I have mentioned above.

Alexandre Araújo Bispo is an anthropologist, independent curator and art critic, and member of the editorial advisory board of O Menelick 2° Ato.

This interview is part of our online C& series ‘The Art of the Black Atlantic’ taking a closer look at Afro-Brazilian presence and cultural production.