As we launch our latest artists’ edition with Lebohang Kganye, we revisit our first interview with the artist about her beginnings at Market Photo Workshop

C&: How would you describe your artistic practice and what was your artistic journey like, how and why did you become an artist? And how has your experience studying at the Market Photo Workshop influenced your practice as a visual artist?

Lebohang Kganye: I actually started out writing poetry and stories, and then doing theatre when I was in high school. It was never my intention to do art; I wanted to do African literature or journalism. However, when I finished high school, I went on to study photography at the Market Photo Workshop. I had a strong desire to incorporate my interest in literature and performance into my photography practice, so one of the trainers at the Market Photo Workshop, Sharlene Khan, introduced me the works of Cindy Sherman, Kara Walker, Mary Sibande, Nandipha Mntambo etc. As a photographer, turning the camera on myself happened very organically. I felt an urgency to become the author and the subject, exposing myself to the public, showing my vulnerabilities, my desires, my contradictions, and my feelings of always having to play ‘catch-up’.

C&: Let’s talk about your photographic-series Ke Lefa Laka. Could you tell us where the idea came from? It is of course highly historical but very personal, too.

LK: Ke Lefa Laka (2013) is a project that came about three years after losing my mother, who was the main link to my extended family and historical roots. I initially began navigating my history through geographic mapping, attempting to trace where my family originated from and how we ended up in these different spaces that we all now call home. I visited the different locations where my family lived in South Africa and found many old family photo albums. I realized that family albums are a significant part of family histories, the photographs are more than a documentation of personal narratives; they become prized possessions, hearkening back to a certain event, a certain person, and a particular time. Family photographs are more than just a memory of moments or people who have passed on, or the re-assurance of an existence. They are also vehicles to a fantasy that allows for a momentary space to ‘perform’ ideals of ‘family-ness’ and become visual constructions of who we think we are and hope to be, while at the same time they represent an erasure of reality. I realized how the family album is composed of a selection of what shall be remembered and what forgotten, turning our histories into orchestrated fictions, imagined histories. 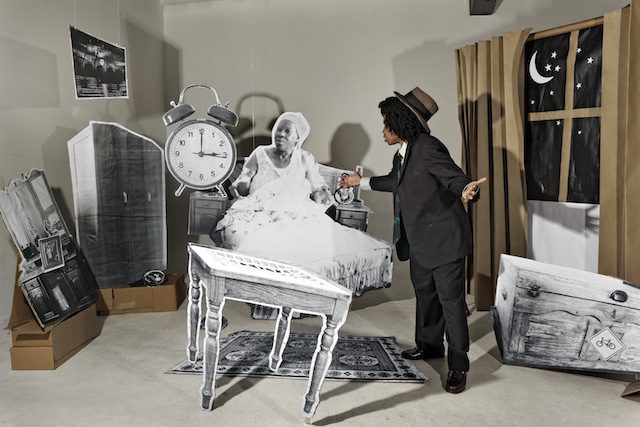 C&: In a way you are the main character in those scenes, embodying your granddad. Why were you interested in playing him yourself?

LK: My grandfather passed away before I was born and we carry his surname (despite the variations in spelling). He was the first person in the Khanye family to move from ‘di’plaasing’, which means ‘homelands’, in the Orange Free State to the city in Transvaal to find work because he didn’t want to be a farm labourer like the rest of the family. As apartheid was ending and the majority of the family moved from the homelands to seek work in Transvaal, they temporarily lived in his house in Johannesburg. As a result, everyone in the family has stories about my grandfather, and even though I was born in ‘his’ house I never got to know him except through stories passed down from family members. So Ke Lefa Laka is also about being in the same place at different times and not meeting. I enact stories about my grandfather to construct a visual narrative in which we meet by using life-size flat mannequins of the characters related to me in various family stories. In these fictive narratives I am the only ‘real’ person, taking on the persona of my grandfather, dressed in a suit, a typical garment that he often wore in the family photographs. The photomontages are composed of sourced images such as scanned original family photographs from relatives, which are then enlarged and printed, pasted onto cardboard, hand-cut, arranged in the studio as temporal spaces, and finally photographed. I feature as the main character in the guise of my grandfather, linking the present with the past.

C&: These scenes would be an amazing performance. Have you ever done this or have you thought about doing it?

LK: I was commissioned by the British Council to produce a short animation for the Mandela Day concert in Scotland from a selection of some of the works from Ke Lefa Laka. I collaborated with musicians Esa Williams and Auntie Flo and produced a stop frame animation entitled Pied Piper’s Voyage (2014). I was actually very hesitant at first, but it has definitely opened up another world for me.

C&: You are from a very young generation of artists, born after 1989, after many political “milestones” all over the world had been passed. How much do past and current politics play a role in your work? Apartheid is obviously one aspect. Would you say that not only you but many South African artists of your generation illustrate apartheid instead of maybe trying to get rid of it?

LK: My work speaks about my desire to understand history and politics in an attempt to mediate my position. I explore the trajectories of family memory and history within the collective, through my visualisation of how I imagine the memories and the stories that are shared with me, carrying them with me and transmitting them so that I become an active participant in keeping these memories alive, as well as identifying with and contributing to them. Ke Lefa Laka becomes a substitute for the paucity of memory, a forged identification and imagined conversation. It allows me to create a space where the past and the present converge to create alternative versions of history and memory – exposing the complexities of memory, the personal and collective. Admittedly, our history is complex and manifests in the everyday. However, growing up in Johannesburg, as an urban, cosmopolitan person of a young generation, I am quite interested in the female body, culture and spirituality, which are all issues I intend to explore in my work. As artists we sometimes depend on critics to help us find a language for what our artwork is about. In their attempt to interpret certain artworks, some authors often simply reference apartheid.

C&: How important is the internet as part of your artistic practice? Does it play a role?

LK: The internet plays an important part in my artistic practice, keeping me up to date with what is happening in the art world. But I love collecting artist books and catalogues; I find them far more interesting, because I can write on them and connect with the materiality.

C&: What are you working on right now, can you say anything about it yet?

LK: I am currently studying Fine Art at the University of Johannesburg and haven’t really been working on anything new, just reading, sketching and planning.

This Interview was initially published in October 2016.