Sparking a Much Needed Debate

Our author Will Furtado takes a closer look at this year's Whitney Biennal currently stirring up controversy over the representation of Black people’s suffering.

The Whitney Biennial often slips under the radar in an industry saturated with art events. However, this year it opened to many positive reviews and not just because of its swish new downtown home. That is, until controversy hit because of a participating artist’s depiction of the gruesome murder of a Black boy.

A great deal of expectation was pinned upon the curatorial team, which consists of Christopher Y. Lew and Mia Locks, both of Asian descent, to tackle Trumpism in America. The formation of the self and one’s place in this turbulent society count as some of this biennial’s themes. And if there was one thing the museum’s director stressed at the press conference, it was that irony was out of the equation. Upon my first visit, I noticed that the curators had gone to great lengths to offer an extremely varied collection of voices, points of view and mediums, which is certainly a strength but can also be a double-edged sword.

The first of two floors features art grappling with topics related to financial speculation, politics, and environment. Jon Kessler contributed two performative sculptures made of kinetic figurative objects, some of which sourced via eBay. The works bear a post-internet kitsch aesthetic, yet they deal with genuine issues. “Exodus” (2016) consists of figurines revolving around a screen, presenting mass migration as a global phenomenon; while “Evolution” (2016) consists of two pale and tattooed mannequins in swimwear and with VR headsets. The figures appear to be snorkeling and taking pictures while below them screens displaying the sea and property developments hint at the rising sea levels and the indifference of the powerful. 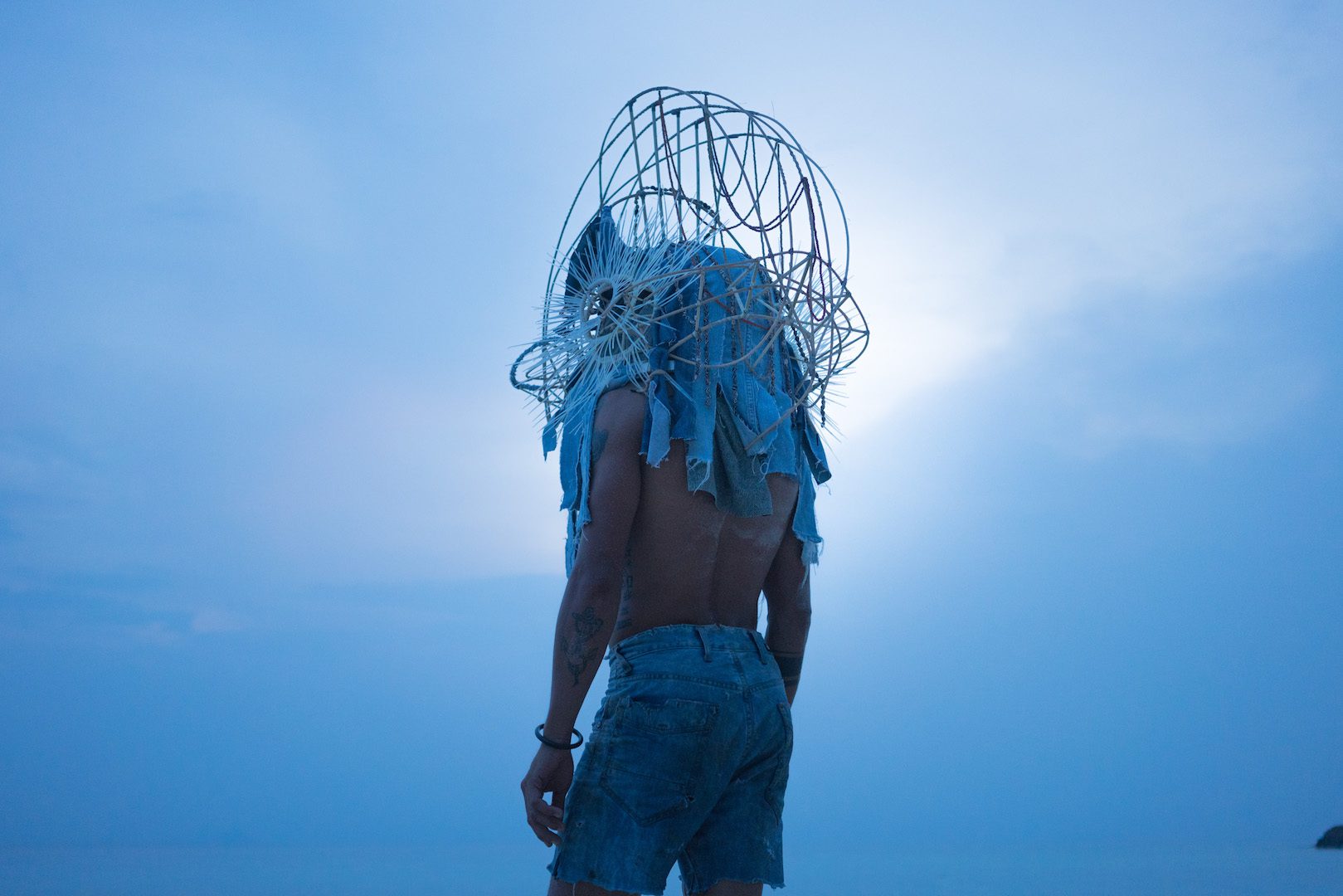 Direct criticism, engagement with the state of the world and creative answers can be seen throughout. Collective Postcommodity’s “A Very Long Line” (2016) comprises a video installation that traces the US-Mexico border in a fast and disorienting film that alludes to the amnesia surrounding Indigenous life in the area before fences had been erected. Tuan Andrew Nguyen broadens the narrative spectrum with “The Island” (2017), a film set on a small Malaysian island where once a quarter million Vietnamese refugees lived. The artist weaves footage from the island’s past with a storyline for its future, hence pondering the effects trauma and displacement have on identity and nationhood.

Cameron Roland is one of the few artists who offer a conceptual yet tangible idea of how the future could be different and more transparent. With “Public Money” (2017), the Queens-based artist asked the Whitney to buy $25k worth of Social Impact Bonds. These bonds are usually used as austerity measures to induce privatization, whose details are normally limited to investors. So with this ingenious intervention, the public can have access to information on secretive social projects that are relevant to them. 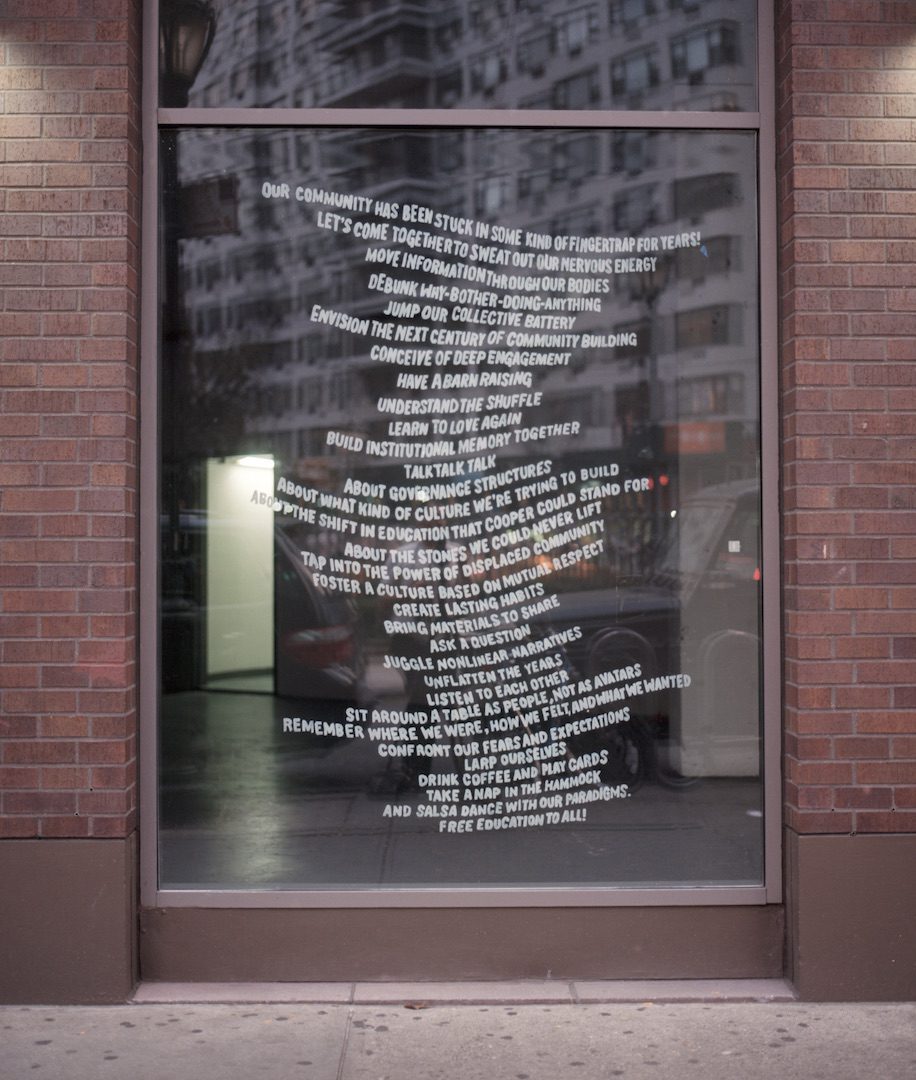 Casey Gollan and Victoria Sobel, documentation of Nonstop Cooper, 2015. Collection of the artist. Photograph by Calla Henkel and Max Pitegoff

Elsewhere, Anicka Yi delves into continuing forms of colonialism in “The Flavour Genome” (2016), a sensuous video about an Amazonian plant that’s treated as a trophy by the pharmaceutical industry. And Raul de Nieves offers a joyful message of hope with his intricate and monumental installation of sculptures and stained glass.

Trying to offer a comprehensive curatorial approach to a theme comes with its pitfalls. In the case of this biennial, there are a couple of works that try to reflect our brutal times with yet more gratuitous and senseless violence. Jordan Wolfson’s virtual-reality work is so literal in its graphic and bloody violence that it kills off any opportunity for catharsis. And Dana Schutz’s painting of Emmett Till’s open coffin extends that one-dimensional approach. The violence here is more conceptual, given the painting is semi-figurative but it’s still too literal, even in its title – “Open Casket” (2016). This, in combination with the fact that Schutz is yet another white artist profiting from Black suffering, has lead to calls and protests for it to be removed and destroyed. Whether that will happen or whether that would make up for the artist’s shortsightedness is still unsure. Nonetheless, the contentious episode has certainly spawned a hot and much needed debate on the representation of Black people’s suffering and why it’s such a sensitive matter rather than raw material. 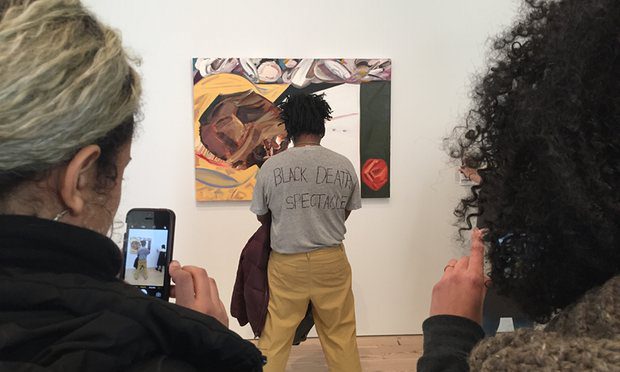 “Many in the black art community are upset by the work” … Parker Bright protesting Emmett Till painting at the Whitney in New York. Photograph: Twitter (provider has asked not to be identified). Source: The Guardian

Despite the controversy, the biennial does translate the feeling of defiance that’s pervasive in New York. The Whitney and its artists have shown that the art world is not indifferent to the rise of nationalism and sadism, and that they’re up for a fight with all the risks that come with it.

Based in Berlin, Will Furtado is  Sleek Magazine  Online Editor, a writer, and curator.