Sounds That Resist Oblivion: The Golden Dreams of Keleketla! Library

Merging sound and memory, Keleketla! is the South African project that put together a series of events for the 10th Berlin Biennale that included a club night and an artist’s talk. Artist Jota Mombaça writes about their artistic position of using sound to resist oblivion and exploring contradiction as composition.

“I am more interested in memory than in official archives,” said Maselo Motana, frontwoman of the Thath’i Cover Okestra, during an artist’s talk with the members of Keleketla! at HAU2 in Berlin. This statement expresses one of the most exciting aspects of the Keleketla! project, namely immaterial forms of archiving and knowledge production, such as conversations, jam sessions, and other gatherings. Founded by Rangoato Hlasane and Malose Malahlela in Johannesburg in 2008, the project provides us with its own definition of “library” as a site of production rather than an infrastructure for accumulation. In this sense, Keleketla! Library is a visionary media arts space that makes room for generative processes of learning and un-learning. 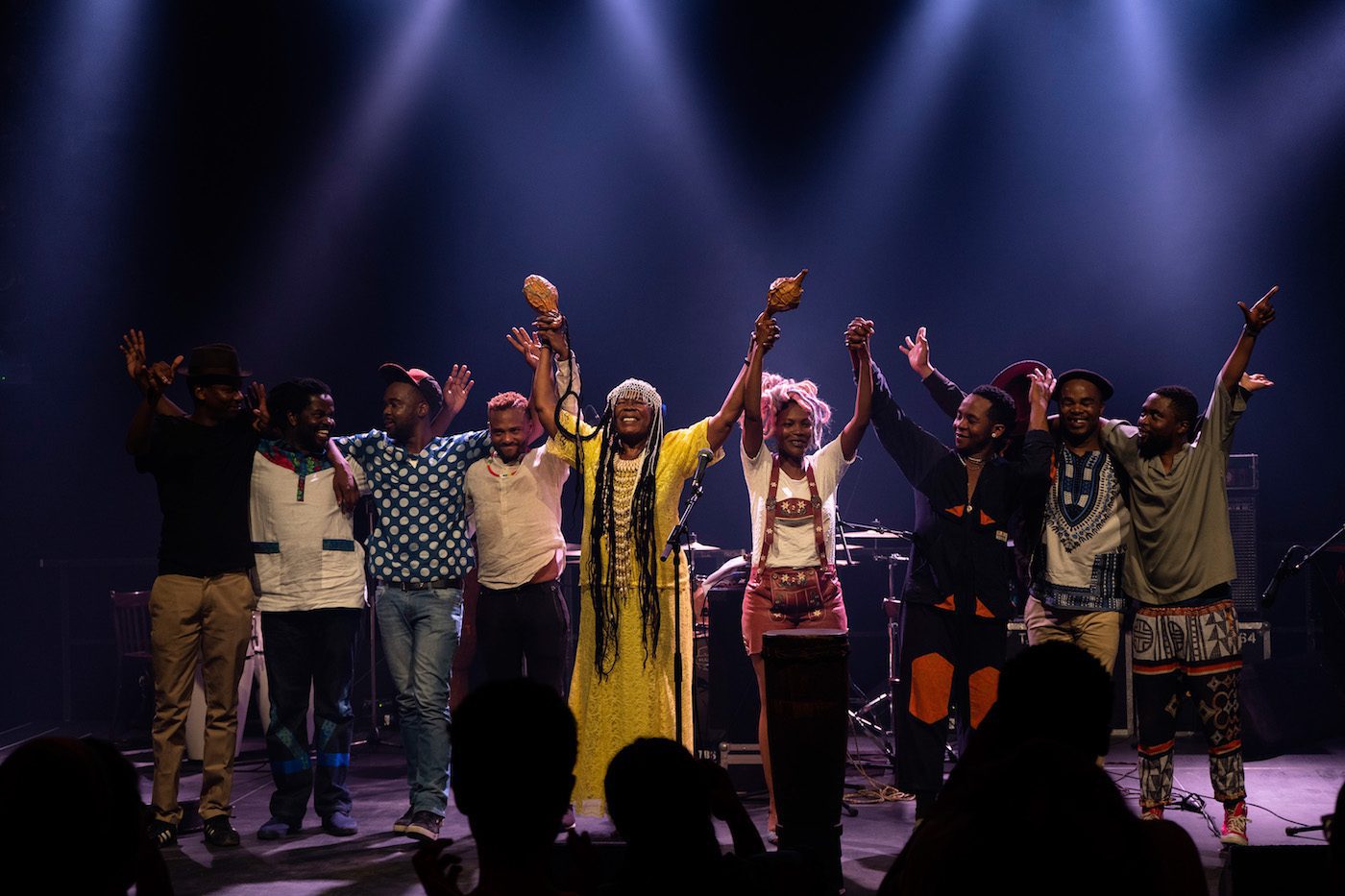 For the 10th Berlin Biennale, Keleketla! Library brought a constellation of events and collectivities, mostly of them hosted and co-produced by HAU – Hebbel am Ufer. These included a short exhibition called The Allure of Gold and Other Solidarity Stories; a club night at YAAM in Berlin, where local and South Africa-based DJs, sound artists, and researchers gathered; two concert nights by Thath’i Cover Okestra; a party; an artist’s talk; and a “Memory Jam” coordinated by South African artist Marlon Denzel van Rooyen along with the students of the 8th class from the Hector-Petersen-Schule in Berlin.

Instead of focusing on a homogenous narrative, the program they proposed drew a complex map with names, locations, quotes, and historical events connected by visual and sonic matter. In the exhibition, for instance, gold becomes a symbol of both solidarity and omission through the overlapping of sentences such as “Mine workers fight for a living wage” and “The ghetto is our first love. Our dreams are made of gold.” The dreams of gold and the mineworkers’ struggle are aligned not just in a positive manner (the golden dream of just wages, healthy jobs, social security, and racial equality that has driven miners’ movements across history), but also because of the centrality of gold-mining in the social predicament of impoverished communities in the South African context.

The controversial statement given by Tina Turner in 1982, after accepting an invitation to perform in apartheid South Africa during the cultural boycott, “I’m only here for your beautiful gold,” also produces an interesting clash with the very title of this biennial, taken from Turner’s hit We Don’t Need Another Hero. As BB10 curator Gabi Ngcobo pointed out in the artist’s talk with the Keleketla! Library crew, this contradiction helps highlight the complexities of a historical character such as Turner, as well as our own complex positions within the art world today. Besides that, the contextual deployment of the same sentence here, in Germany, in the frame of the Keleketla! program, acquires meanings that the original statement – a continuity with racial capitalism and its imperialistic forms of extractivism – cannot encompass. In 2018, deployed by an African collective in the European territory, the same sentence may eventually be read as a claim for reparation. 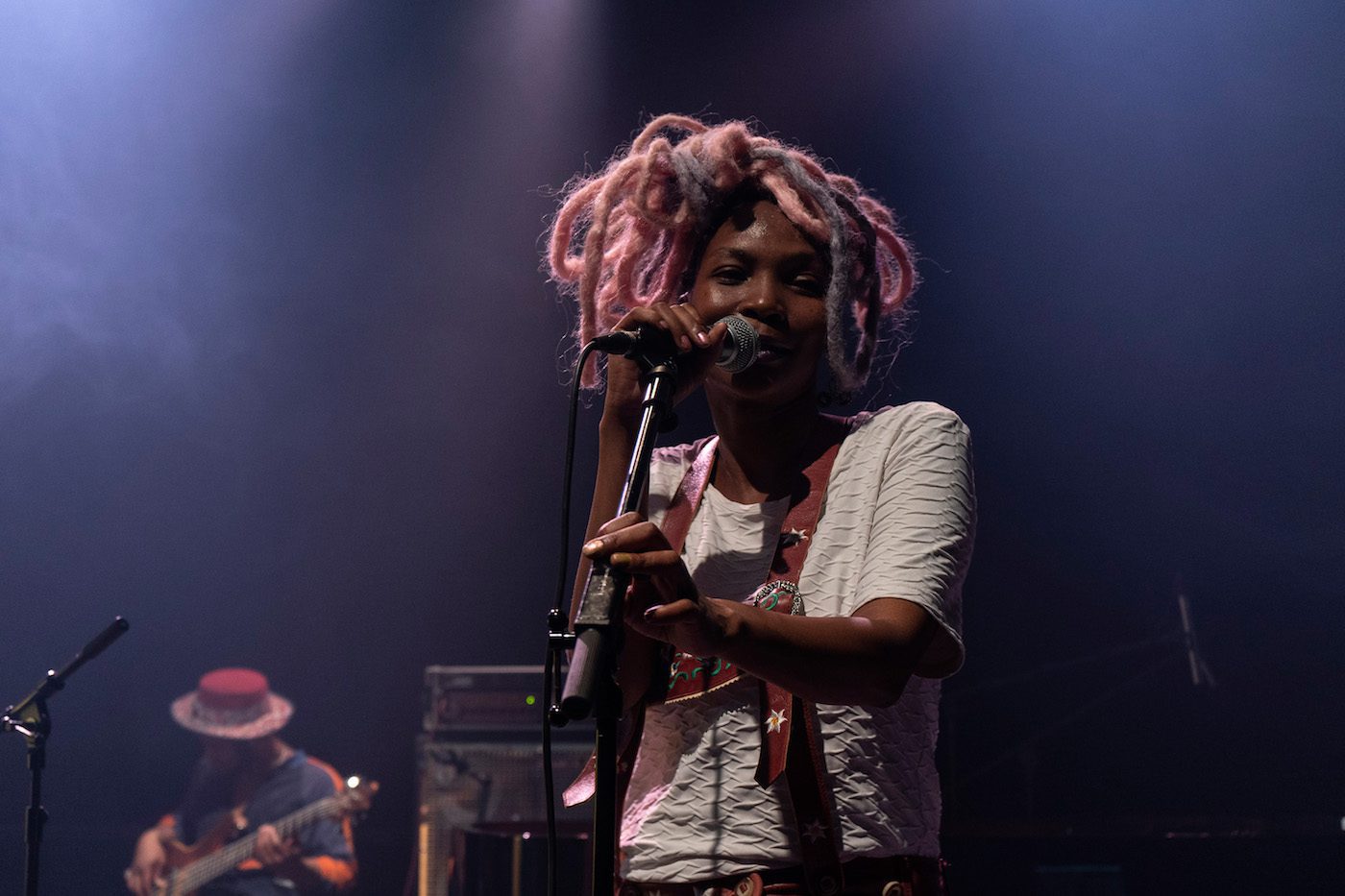 The ethical option of exploring contradiction as composition rather than as opposition also manifested itself in Thath’i Cover Okestra’s concert, entitled Volume 5: 17 July to 12 September 1977. Lebo Mathosa is born. Steve Biko is assassinated. The birth of a Kwaito icon and the assassination of an anti-apartheid activist may not be immediately read as connected events unless we are familiar with the sonic history of South African struggles for liberation and, of course, with the fact that the very condition of the emergence of a Black pop star such as Mathosa in South Africa was the struggle against apartheid to which Biko has dedicated his life.

Thathi’s Okestra has been, since its beginning in 2012, a platform that looks at the legacy of Kwaito music, seeking its sociopolitical effects, along with the Black Consciousness movement, in the formation of a new generation. With Yonela Mnana on the piano, Yusuf Makongela on the guitar, Tiko Ngobeni on percussion and didgeridoo, Mma Tseleng on electronics, Simphiwe Tshabalala on drums, Ayanda Zalekile on electronic bass, and Masello Motana singing, alongside internationally known Mbira instrumentalist Ambuya Stella Chiweshe, who currently lives in Berlin, the Okestra took over HAU’s auditorium with two breathtaking performances in which music and memory merged.

Even if the project has already finished its participation in the biennial, something remains as a sound that resists oblivion: the memory produced by those events. And that is the very matter of which Keleketla! Library is made.

Jota Mombaça is a non-binary bicha, born and raised in the northeast of Brazil, who writes, performs and academically studies on the relations between monstruosity and humanity, kuir studies, de-colonial turns, political intersectionality, anti-colonial justice, redistribution of violence, visionary fictions, the end of the world and tensions among ethics, aesthetics, art and politics in the knowledge productions of the global south-of-the-south.

The 10th Berlin Biennale continues in Berlin until 9 September 2018.