The Villa Romana in Florence is opening its space and this year’s winners and residents are happy to share their artistic processes and their responses to the Open Studio topic “Would Have Been.” Christophe Ndabananiye talks with C& about the idea of sharing his work with creatives from other disciplines in a “Bed & Breakfast” concept, about personal experiences in Florence, and about a new approach to a life trajectory that runs from Rwanda to Germany.

Contemporary And (C&): Could you share the concept of the Bed & Breakfast residency and the ideas behind the current edition of the Open Studio with us?

Christophe Ndabananiye: The process of opening up and of dialogue is a key concern in light of current social and political developments, as is the wish to convey the special quality of an artist residency. On a symbolic level we have dedicated the Open Studios to the Sinti and Roma in the neighborhood. We wanted to open the Villa’s doors to everyone, to local residents and to those who are interested in the concept of the artist residency.

For my own personal work, I interpreted the title “Would Have Been” primarily in terms of an attempt to map out my memories using very personal clues and traces. I found it very interesting that, within the context of “Would Have Been,” we all chose a perspective that radiates from the present into the past as a means to imagine the future. The project “Bed & Breakfast with the Artist” was also about sharing everyday working and artistic routines with creatives from other disciplines and exchanging views and perceptions. It was about asking, “How do I see the city? How do the old crafts speak to me here—and to others? 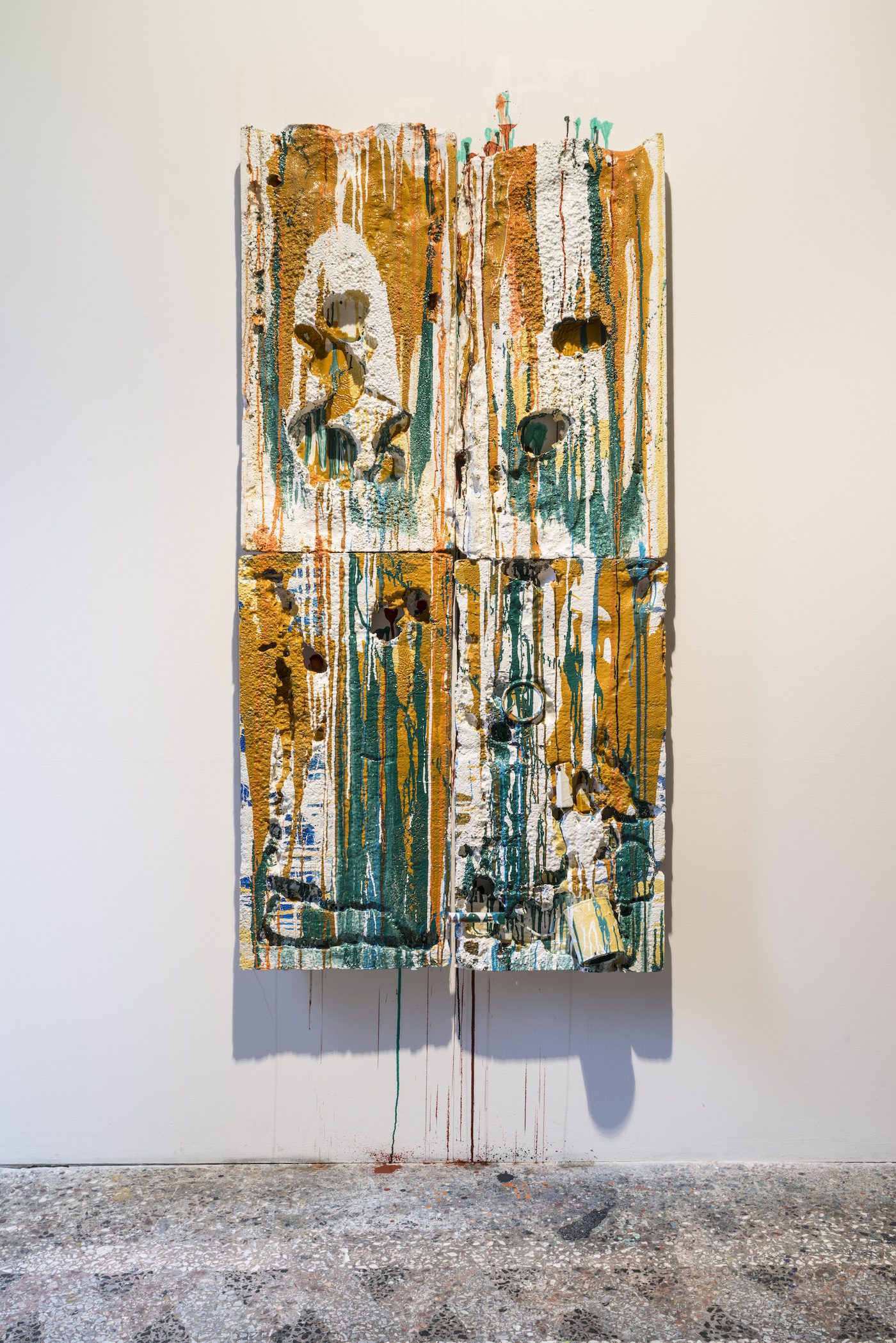 C&: The Open Studios are about community and imagined spaces. How did you interact with the local conditions in Florence? And what counter-narratives did you engage with?

CN: Before coming here, I was not familiar with either Florence or Tuscany, or Italy for that matter. At most, I had an idea of the Renaissance and the old masters from that time. Since February I have seen many works in the original and as a painter that is very inspiring. However, what is more important for my work is the place itself, the old city, the landscape, and the connection with my mother tongue Swahili. I actually only speak it with my family and friends. But at the moment I am sharing something of myself in this language through the objects that I discover on the streets and give Swahili titles to. For example, a door from Fiesole that had been bricked up from behind. It reminded me of a very similar doorway I know from Rwanda. There are also parallels in the landscape: the mountains around Florence evoke images of Rwanda for me. It is a personal work of memory that also releases language. It is about the places that have been important to me, from my hometown of Lubumbashi in the Democratic Republic of Congo, where I spent my childhood, to the other key cities in my life: Kigali, Gisakura, Detmold, Bayreuth, Berlin—and now Florence. I’m looking for a system of coordinates to connect these places, a kind of mental topography. 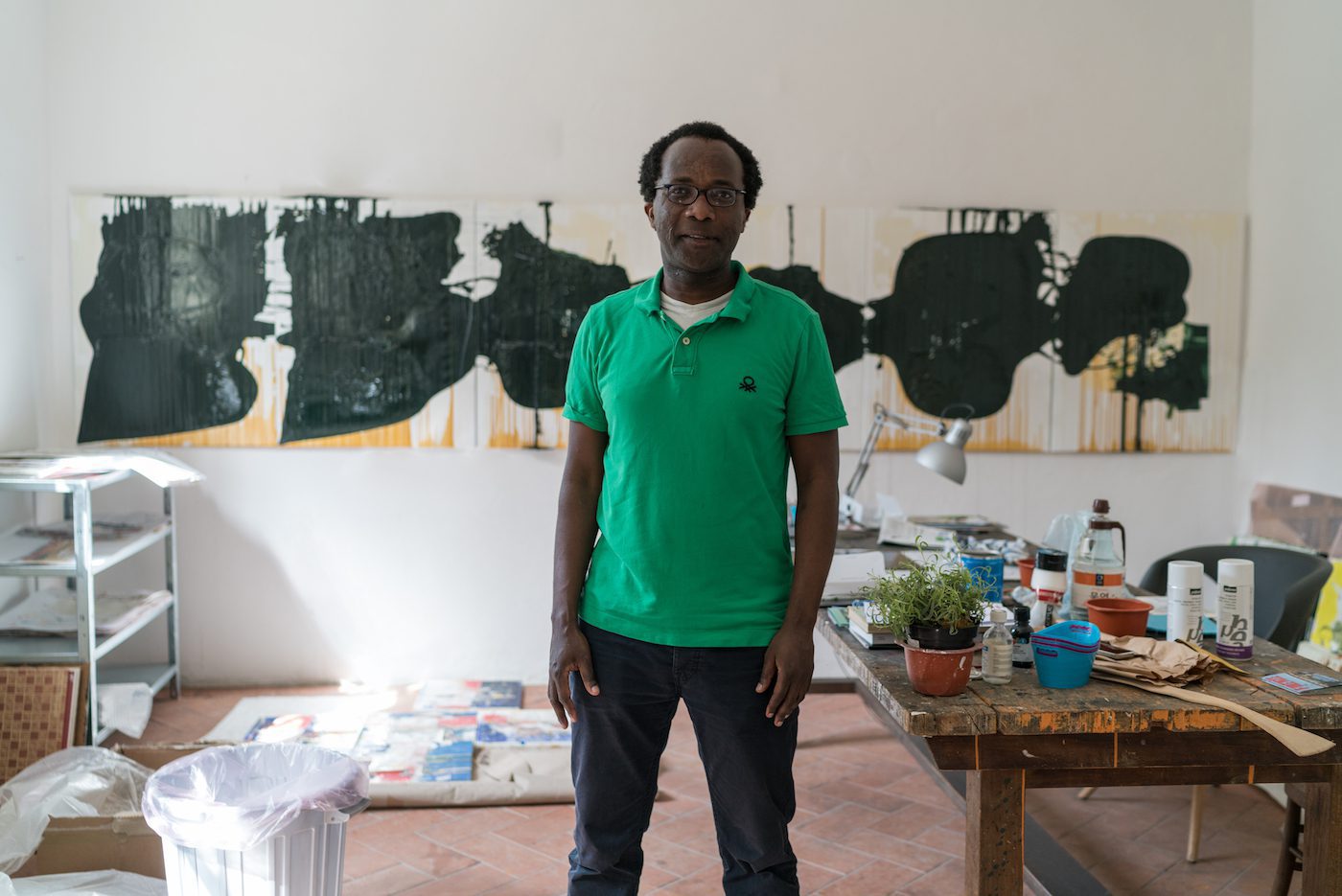 Christophe Ndabananiye in his Studio at Villa Romana, Florence. In the back:
Self portrait III, 2012-2018. Mixed technique on canvas (6 parts) , 100 x 480 cm.
Photo: Ela Bialkowska,OKNOstudio

C&: You’re opening up your artistic space within this residency. Why do you think such residencies are important for artists and visitors? And what can we learn from this specific one?

CN: Artist residencies are a process of self-examination and reflection. Here I can focus on my work and its core aspects. This brings a lot of things to the surface, almost like in therapy. Since I’ve been here, I’ve been preoccupied with the Swahili word kuwaza, which means “contemplating” or “setting memory in motion.” I’ve been thinking about very different situations, including people who are already dead. And the presence of the term creates a series of parallels in my imagination and in my painting. If I were to say the word in German, it would be in the static language that I needed to learn when I came to Germany.

Complex remembering is like a survival strategy. Kuwaza is part of the language of my childhood. My grandparents came from Rwanda, and in the 1950s and 1960s they worked in the mines in Katanga for Gécamines, the Belgian mining company operating there at the time. My father and mother also lived in a place where they were always “other,” rather like the Turkish Gastarbeiter in Germany. The copper crisis in the 1970s and 1980s forced them to return to Rwanda, where we were then perceived as Congolese. These are the phases I am now processing: Congo, Rwanda, Germany, Italy—because the questions of exclusion and identity have been with me my whole life. In the Open Studios I am trying to work with the word kuwaza as an installation, creating a space of memory in which I feel at home. What’s nice about this is that I am not alone but share the space with four completely different artists. This constantly gives rise to new perspectives.

Christophe Ndabananiye, born 1977 in Lubumbashi, Democratic Republic of Congo, since 2009 lives and works in Berlin. He studied at the Hochschule der Bildende Künste of Saarbrücken. As a painter, he’s the author of a series of self-portraits informed by themes of traumatic experiences related to escape, family, homeland and mother tongue. Then he began using shoes as an embodiment of the movement of the individual and of the force of gravity. In his own country, Congo, the artist photographs the shoes of unknown people and then depicts them in paintings or installations. In his latest paintings he is developing his work on memory on paper and polystyrene sheets.