The “disappearance of the black” in Argentinian identity is one of the most intriguing mysteries in the country’s history. Artist Adriana Bustos talks about her project “The Return of the Repressed”, which examines the profound distortions related to African legacy in Argentina.

Adriana Bustos, The Sea and its multiple tributaries, detail, part of the Return of the Repressed, 2017. Courtesy the artist.

Between 2006 and 2011 I created the project Anthropology of the Mule. With this, I wanted to document the presence of pack horses in the city of Córdoba in the light of the financial crisis in 2002. My research led me through the city’s history as a mule breeding center during the colonial period. From the sixteenth century on and far into the eighteenth, the regional economy depended on breeding mules, which were later transported up the Rico de Potosí mountain, nowadays in the Bolivian Andes, to be used in the excavation of precious metals destined for Europe.

In 2006, local media revealed a scandal related to the Argentinian airline Southern Winds, which for years had been trafficking cocaine from Bolivia to Spain via Córdoba. In that moment, I understood that the old colonial routes overlapped with the contemporary drug trafficking routes. This led me to look further into what happened in the prisons in the region and, to my astonishment, I discovered that 70 percent of the incarcerated female population was serving sentences for drug related crimes. In other words, more than half the incarcerated women were informal drug smugglers, or, as they are commonly called throughout Latin America: “mules”…

But let’s return to the colonial era. The mule breeding industry and the transfer of the animals to Potosi was an activity carried out, to a large extent, by black slave labor. One traditional narrative sustains that the forced laborers were indigenous people. This distortion surprised me even more than the discovery that, during the seventeenth century, when the black population in Cordoba was at an estimated 60 percent, in contrast to the present, practically non-existent representation. From that moment on, I was unable to let go of the topic. The initial project had pulled me in a remarkable direction.

One of the works in the series Anthropology of the Mule, 2006-2011, detail. Courtesy of Adriana Bustos.

As a consequence, in early 2017, I began envisioning a new project, which I have named The Return of the Repressed, hinting at those denied cultural contents, which, notwithstanding, always come back in some form or other. Inquiring into colonial archives allowed me to peep into the genealogy of racism and capitalism. Racism and colonialism are inseparable, and, on some level, they are the founding pillars of modern capitalism. It is impossible to think of race without the qualifying eye of the colonizing power, which couples inequality with the intention of justifying the domination, slavery, servitude and the annihilation of the – supposedly naturally – inferior other.

Towards the end of the nineteenth century, after the independence wars, a process of constructing a national identity took place in Argentina as well as in the other Latin American countries. This identity was forged from myths of origin, symbols and national heroes. Thus emerged a new mirror – marked by European longings – where it was possible to recognize oneself as “Argentinian”.

In a kind of whitening of the population, migratory politics were promoted, stimulating European immigration and adding to the manipulation of population statistics, which, from the nineteenth century onward, eliminated the variable “race” in the surveys. The census of the city of Buenos Aires in the year 1778 indicated that 30 percent of the population was black. In 1887, no municipal census registered information about race.

The alleged disappearance of the black population is one of the most intriguing mysteries in Argentinian history, even if the official narrative proposes different explanations. One of these, quite obviously, is the decline of slave trafficking following the abolition of slavery in 1813. A second explanation refers to the disappearance of the black population as a consequence of the independence wars, where Spanish, indigenous, Brazilian and Paraguayan people fought each other, and where millions of Afro-Argentinian soldiers died in battle. A third hypothesis talks about miscegenation or interracial marriage: given the scarcity of men after the wars, black and mulatto women, with the aim to improve their social mobility, turned towards white men in the hopes of bearing children with fair skin. A fourth argument refers to the low birthrates and high mortality rates resulting from the economic conditions which placed the black population at a precarious social level. The black population had a lower life expectancy than white people. The disappearance culminated, as a coupe de grace, with the yellow fever epidemic in 1871.

Bio-Economy, part of The Return of the Repressed, 2017. Graphite on heliography of slave ship. Courtesy of the artist.

Despite the fact that the traditional explanations are partly accurate, very little has been done to prove them. Above all, they are distortions which tend to obscure the role of the Afro-Argentinian population in Argentinian history. In its cradle, the country declared itself a project of a white, European and civilized nation. To achieve this, it was considered urgent to exterminate the indigenous population and to conceal the black population. The obliteration of black intellectuals, artists, poets, writers and journalists derives in a partial reading of history of an important part of the population, which only appears to have died out without leaving any trace of accomplishment or creation behind.

The fact is that our racial classification system is very unusual, setting us apart from other Latin American countries. In Argentina, categories exist such as “black of skin” and “black of soul”. Black of skin refers to the black phenotype, which, it is considered, lives only in other Latin American countries such as Brazil, Uruguay, Cuba etc. Its features ceased to be visible in order to transform into non-visible genotypes, and the blackness was converted at some point into a condition of the soul. In Argentina, it is said that a person is “black of soul” when her or his conduct is considered inappropriate, of bad taste, sexualized, supposedly primitive or, uncivilized. Once the external indicators of the skin color disappeared, the signals of any suspicious or threatening behavior was considered “black”. Suffice it to say that the relationship most Argentinians have with race is a form of schizo-paranoid fantasy. 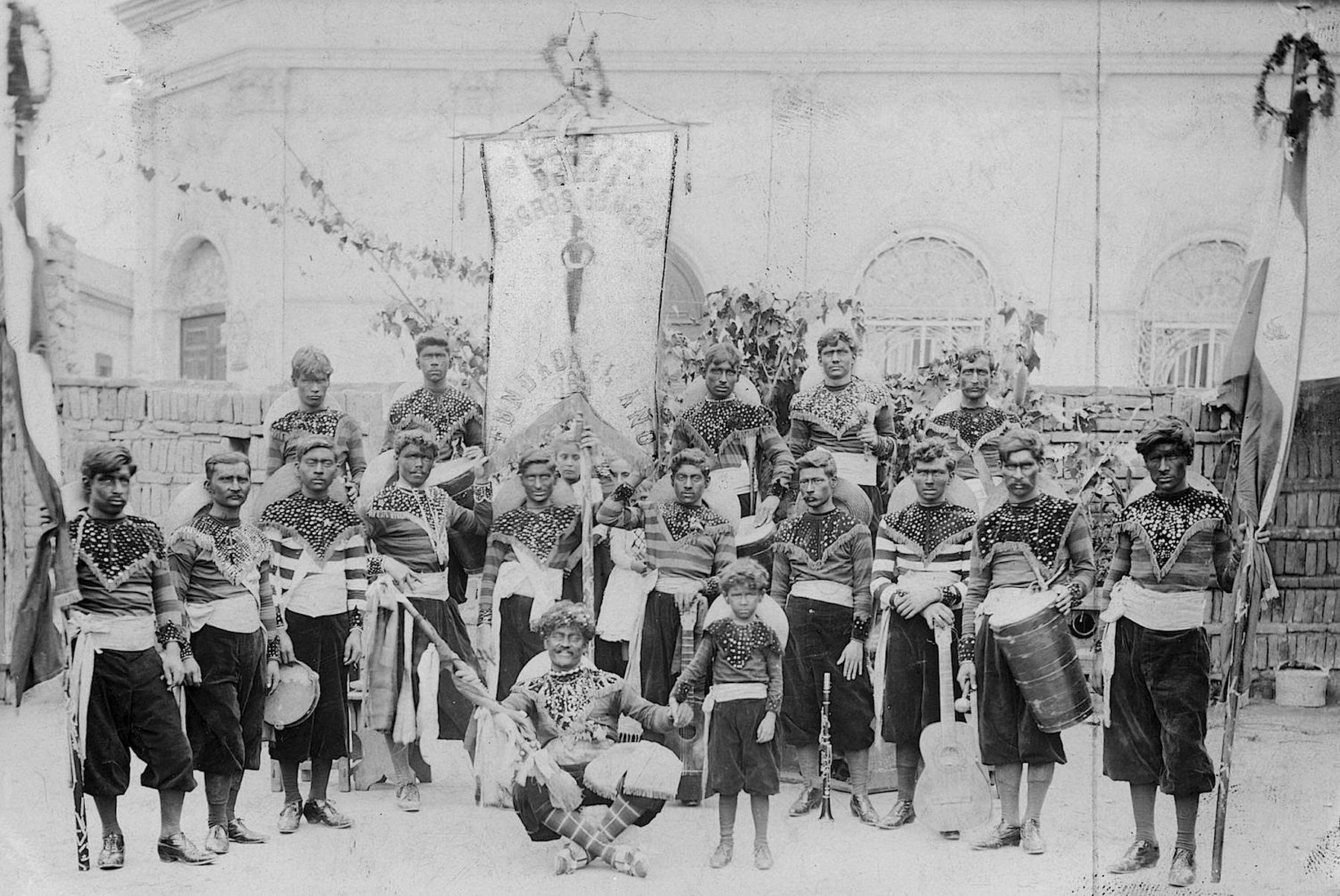 An eloquent documentation of this is a picture which I found in the National General Archives at the Department for Photographic Documents in the section “Afro-Argentines” and which, symptomatically, contains almost no material.

It is an institutional image from 1891 which supposedly portrays the “Black Congo Society”. But in the picture there are no black people. Instead, the group of people in the photograph have been made-up and arranged in the scene. Aside from being, paradoxically, the image of an invisibilization, there are a number of different ways in which to read this picture. One could be: the black body was not considered worthy of being immortalized in a photograph.

Adriana Bustos was born in Bahía Blanca, Argentina, and lives in Buenos Aires. She uses installation, video, photography and drawing to develop a narrative discourse in which reflections on social, political or religious oppression predominate in a non-linear interpretation of history. She holds a degree in Fine Arts and Psychology, and in 2016 she was awarded the Federico Jorge Klemm Award for Visual Arts. Her work has been shown in exhibitions in New York, Quito, Buenos Aires, Madrid and Moscow, among others, as well as in art fairs such as arteBA, Zona Maco, ARTBO, ARCO or Projects Frieze as well as several international biennials.

Translated from the Spanish by Zarifa Mohamad Petersen