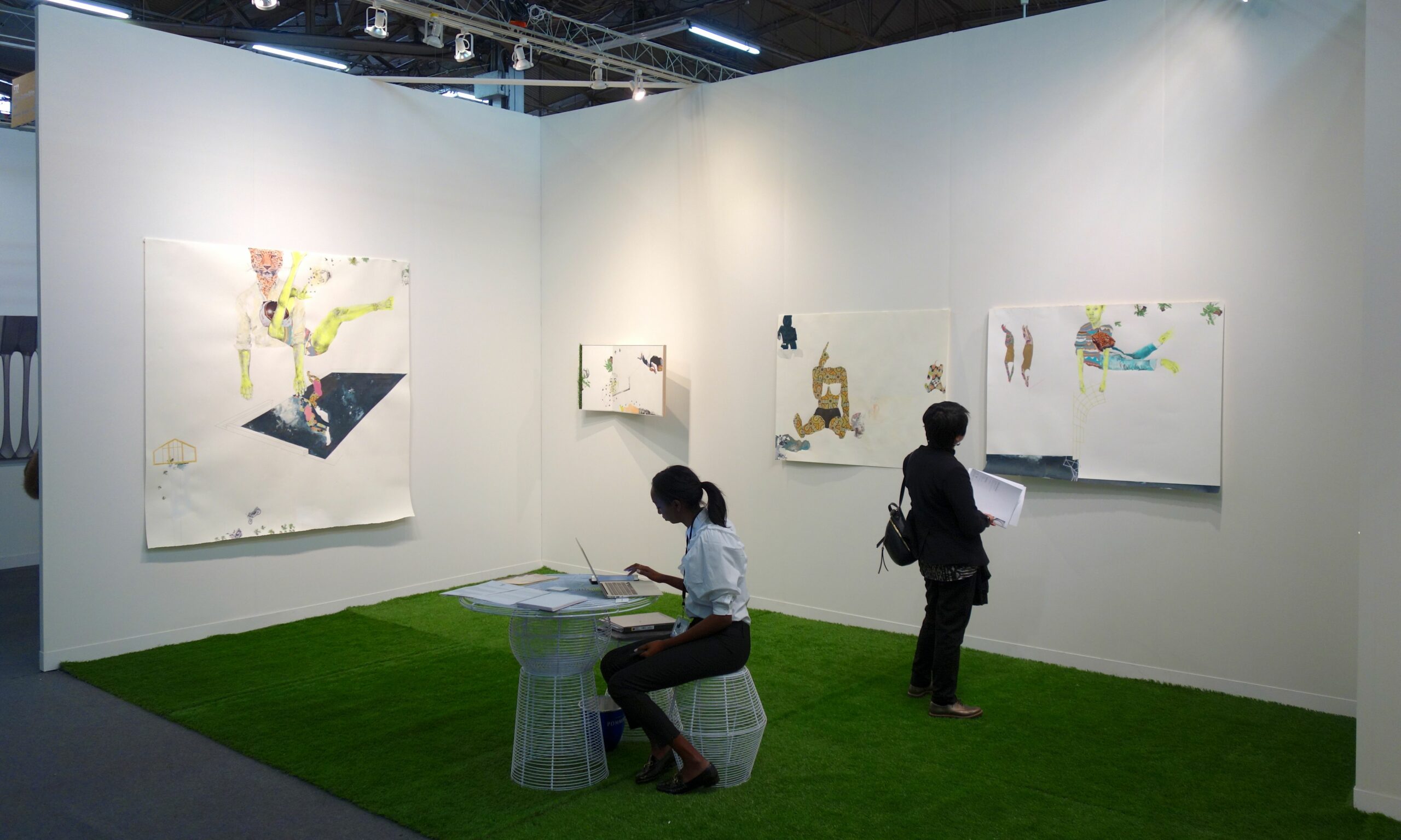 Confronted with the notion of identities, Lagos-born, Brooklyn-based ruby onyinyechi amanze expresses a detachment with the social assumption that a single geography is necessary to ground an individual. She firmly excludes the concept of belonging to a place as a detrimental factor of identity and instead suggests a hybrid and lyrical invention of a place that is fluid and ever-shifting in one’s reality. 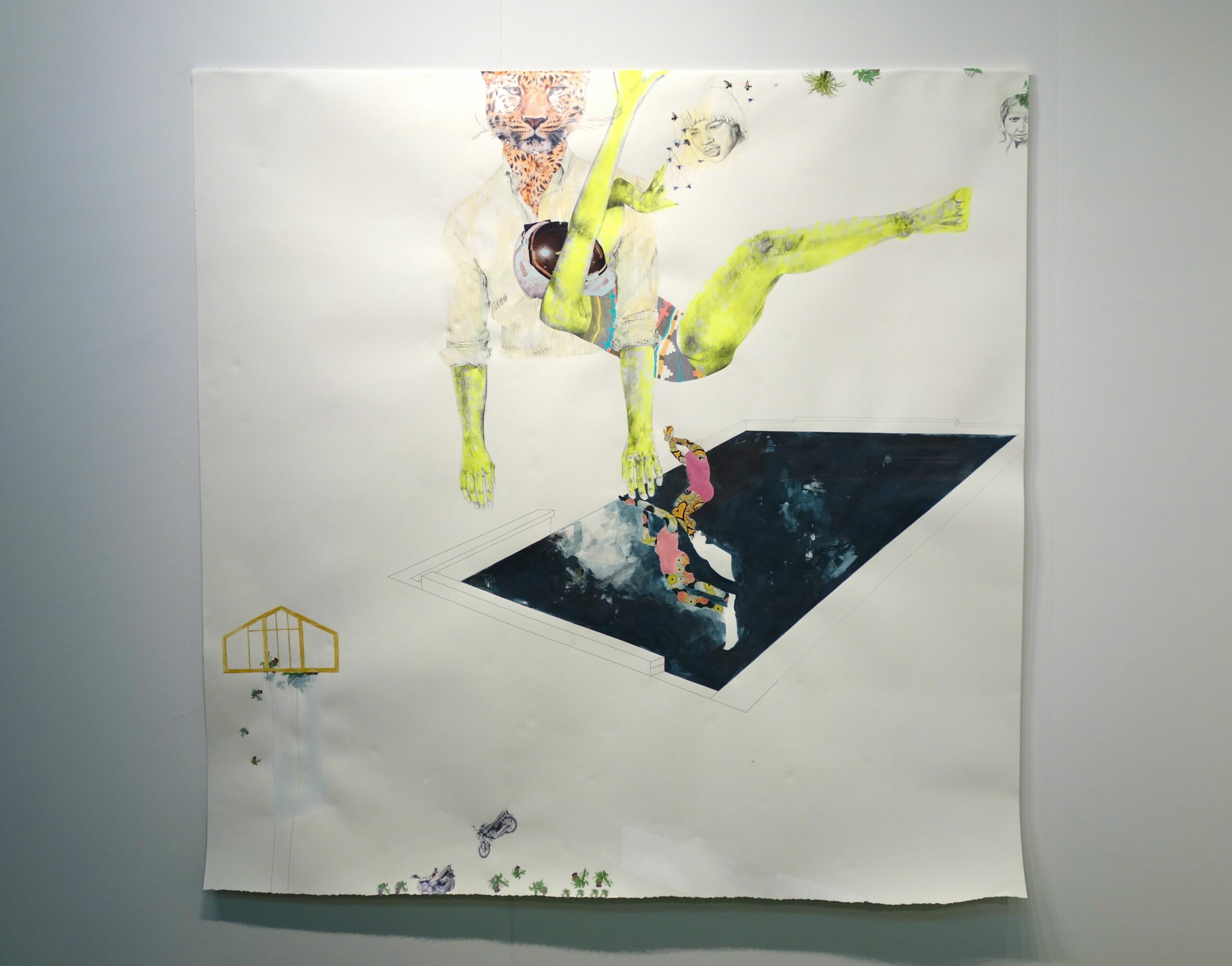 Her drawings trace a floating and quasi-evanescent universe, inhabited by a family of aliens, hybrids and ghosts. amanze consciously evokes emptiness as a transitory space, silence as a conduit to introspection and layers of seemingly dislocated imagery where her dreamlike creatures form and disintegrate like traditional families. Her works on paper are a unique blend of delicately executed representational drawings, alongside whimsical patterned forms and experimental surfaces. amanze’s intuitive studio practice and nomadic world-view are also reflected in new drawings premiering at Armory Focus 2016.

amanze earned her B.F.A. from Tyler School of Art, Temple University, in 2004 and her M.F.A. from Cranbrook Academy of Art, Bloomfield Hills, Michigan in 2006.

In 2012-2013, she was the recipient of a Fulbright Scholars Award for Drawing. amanze has exhibited her work internationally including, New York, Miami, London, Lagos, and Cape Town. She recently concluded the 2014-2015 Workspace Program with the Lower Manhattan Cultural Council and is a 2015 summer recipient of the Fountainhead Residency in Miami. 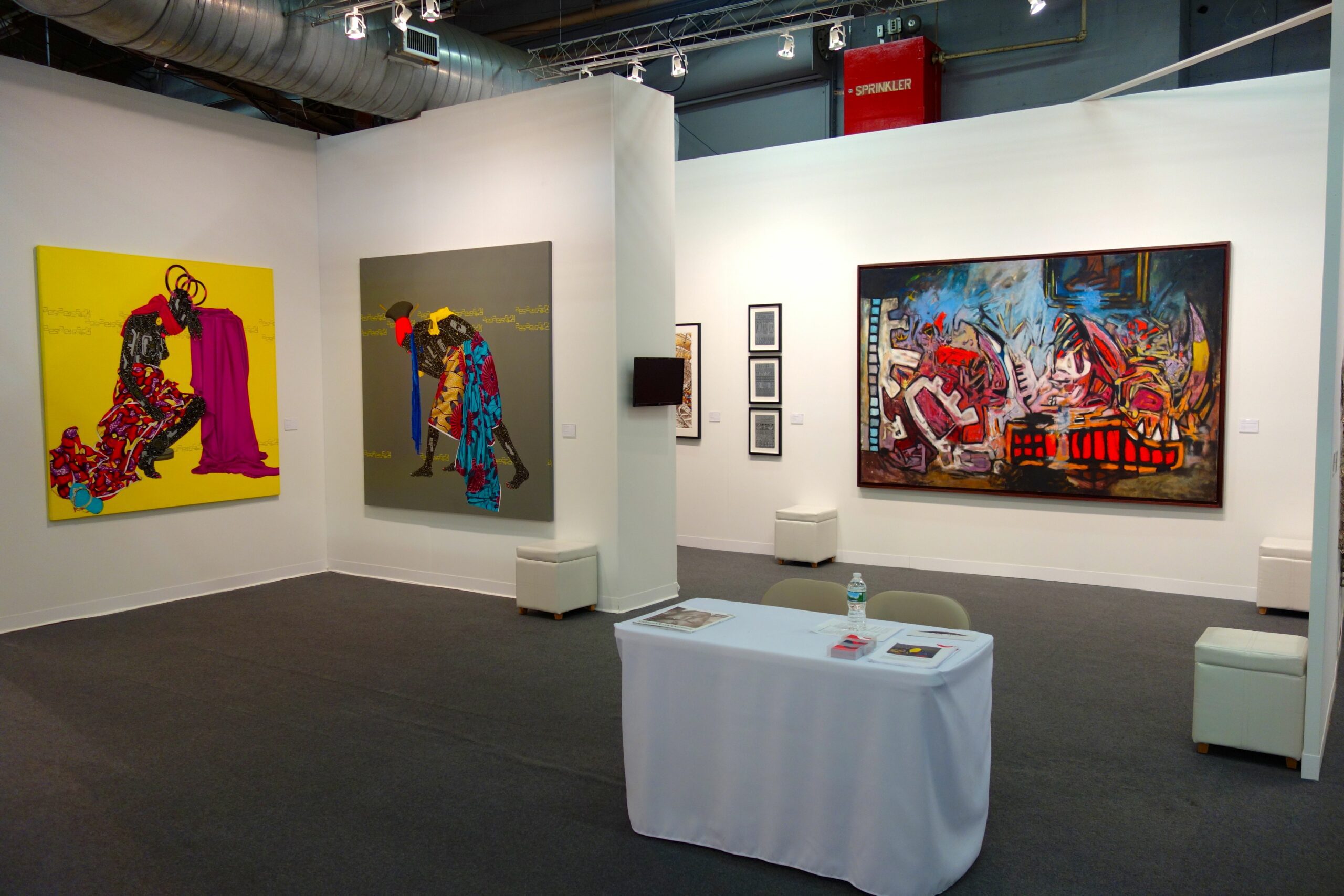 The booth at Armory Focus 2016 focuses on the work of Aubrey Williams but includes two works by the young artist Eddy Kamuanga Ilunga to juxtapose the artistic positions of painters from different generations.

Aubrey Williams is one of the great enigmas of 20th century painting. In 1952, Williams moved to London where he became a prominent figure of the post-war British avant-garde scene. In 1966, he founded, together with a group of Caribbean writers, artists and intellectuals the Caribbean Artist Movement. From 1970 onward, Williams worked in studios in Jamaica, Florida and the UK. His work expresses the urgency of his concerns about the destruction of the global ecological balance far predating our current global understanding of the complexity of the problems we face. 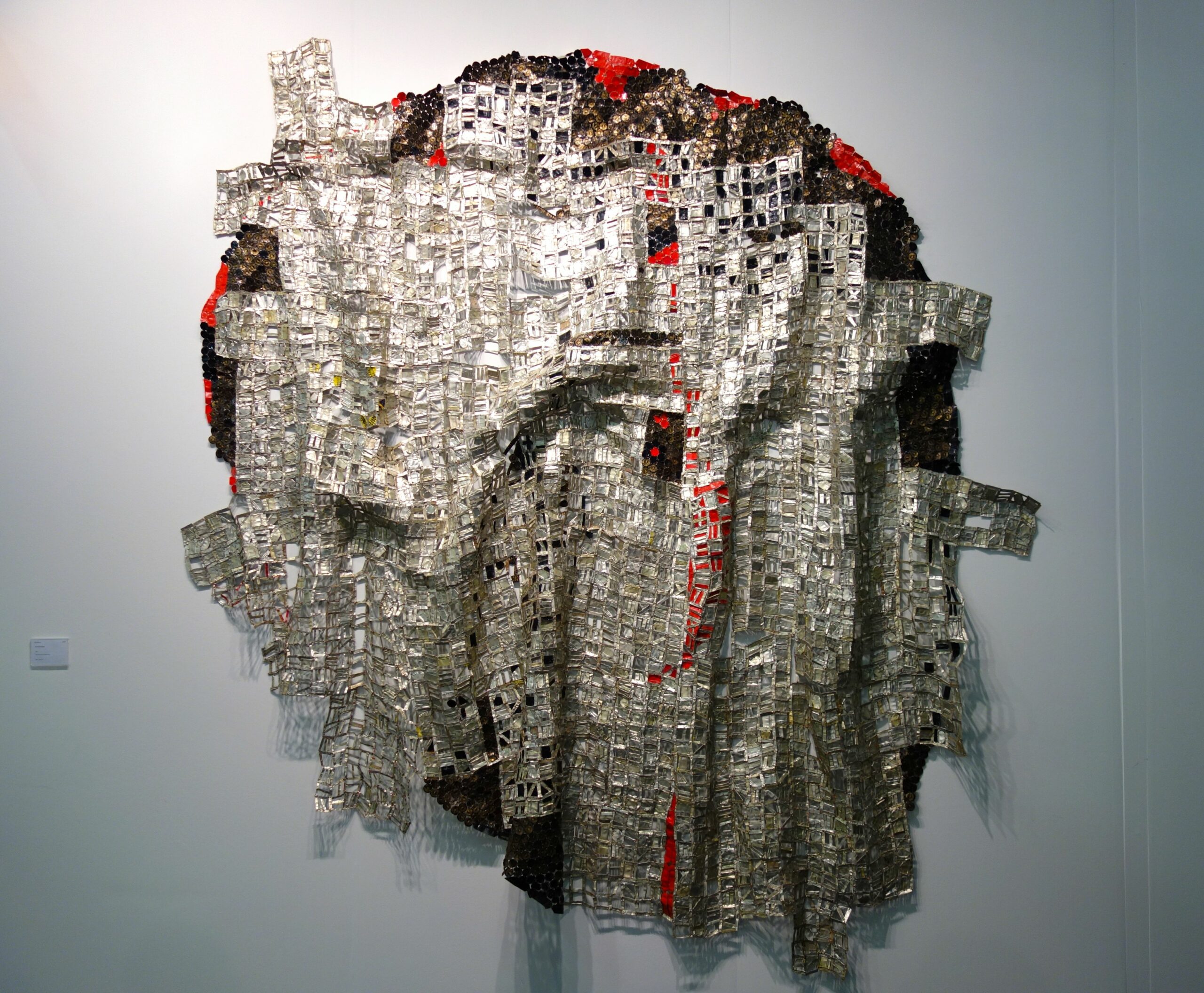 The paintings of Eddy Kamuanga Ilunga reference the endangered warrior culture of the Mangbetu in the Democratic Republic of Congo. The warrior symbols in his paintings mix with clean, contemporary signs of digital technology, the aesthetic vocabulary of fashion and Congolese urban culture. Ilunga graduated from the Institute of Fine Art, Kinshasa, DRC, in 2009. He then joined the Academy of Fine Arts, Kinshasa and soon after founded the studio M’Pongo, a collective of young artists searching for an individual style. Most recently his work was on view at Saatchi Gallery, London as part of Pangaea II (2015). He is based in Kinshasa. 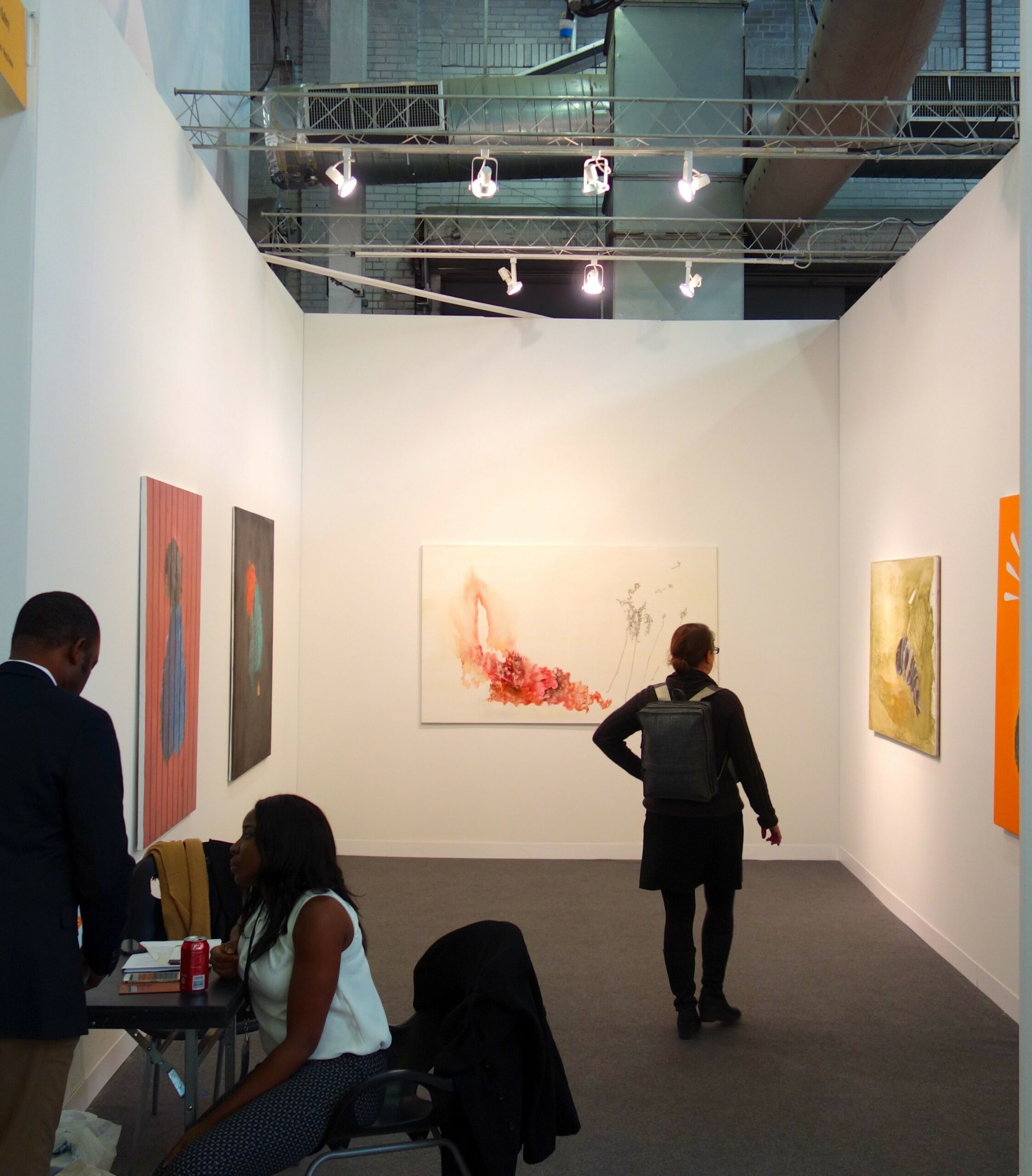 Nengi Omuku’s artistic practice is comprised of a collection of imagery; iridescent landscapes bathed with light from half-hidden globes and populated by clouds and waterfalls; fantastical formations peopled with hybrid beings and floating organic bodies; imaginary vistas of intergalactic fields; and emerging cloud formations. Omuku’s transiting clouds and waterfalls are representative of different physical states in the process of energy conversion. 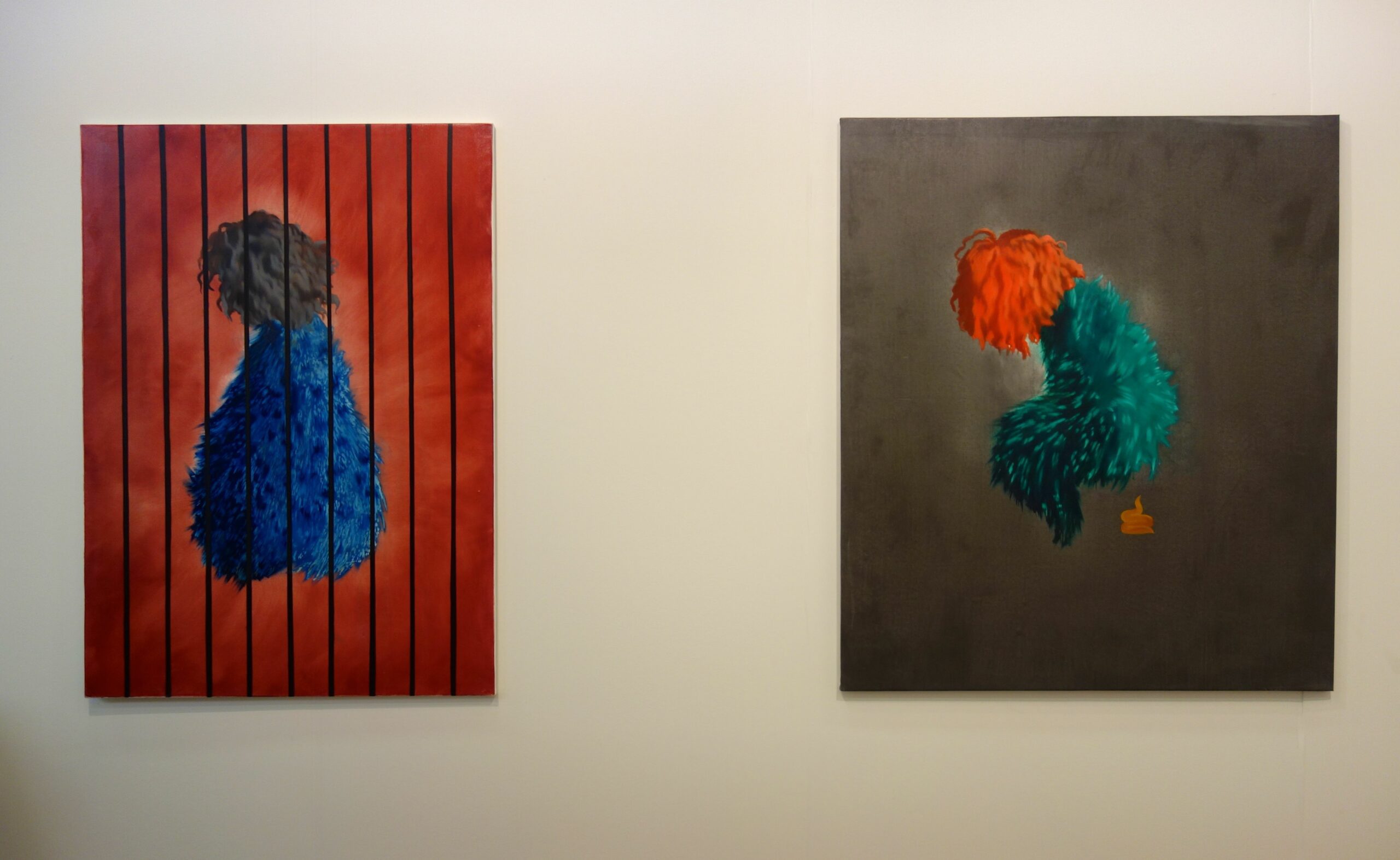 Her works underscore the transient and fragile nature of life and forge a new, hybrid identity that draws on the physical environment and cultural climate of each location and relocation. At Armory Focus 2016, Omuku will showcase a selection of her most recent paintings.

Nengi Omuku completed her B.A. and M.A. at the Slade School of Fine Art, University College London. She has had exhibitions in the UK at the Slade Research Center, London (2011) and the Camden Art Gallery, London (2009). She now lives and works in Nigeria. 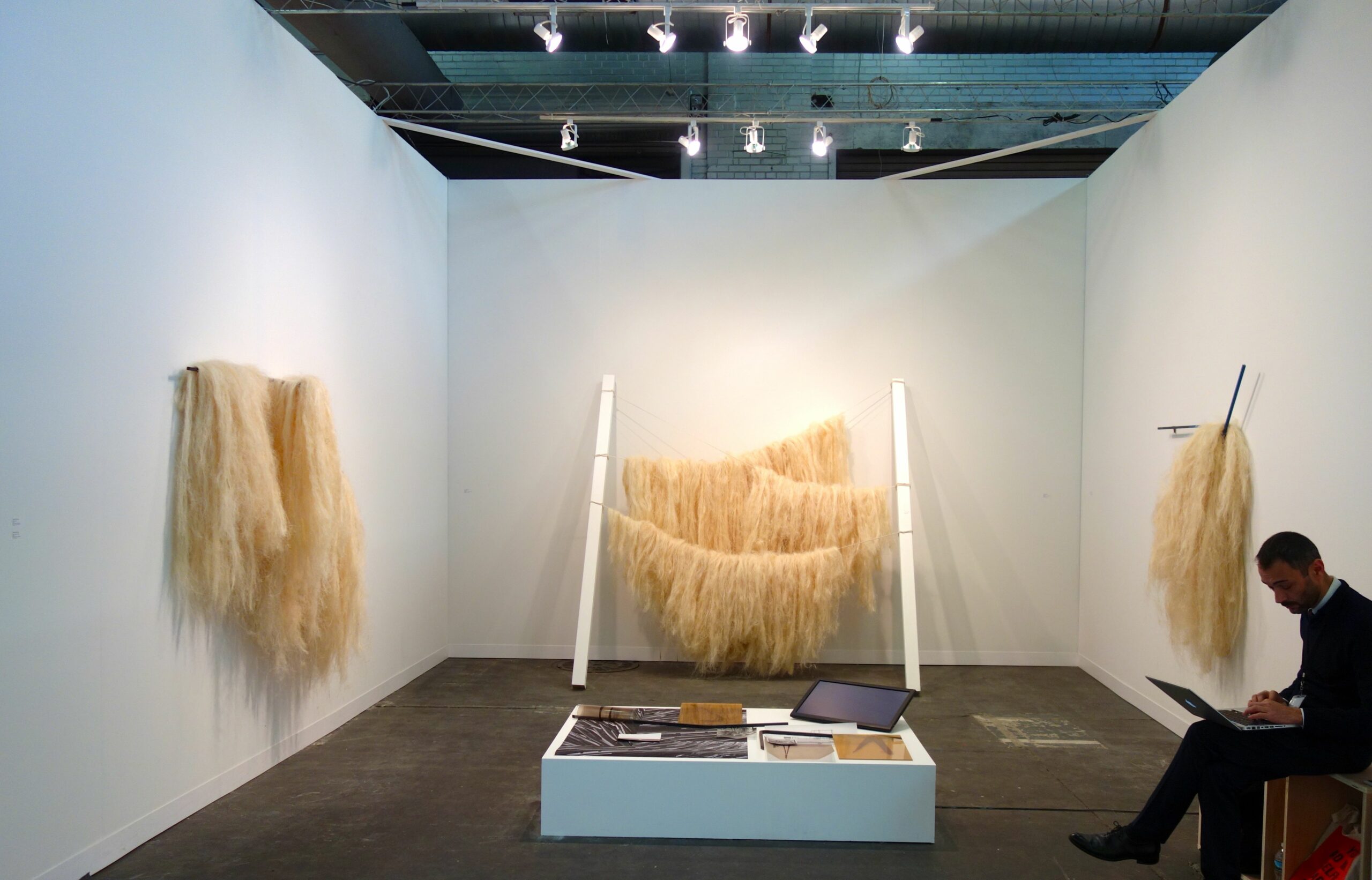 For Armory Focus 2016 Kapwani Kiwanga will debut a large, sculptural assemblage using a variety of material: wood, sisal and archival images—both moving and still. Sisal is the main component of this assemblage and is present in the sculpture in various forms, such as the plant Agave sisalana; sisal fiber, which is obtained by compressing the sisal leaves and sisal rope of different diameters made from the spinning of the fibers. 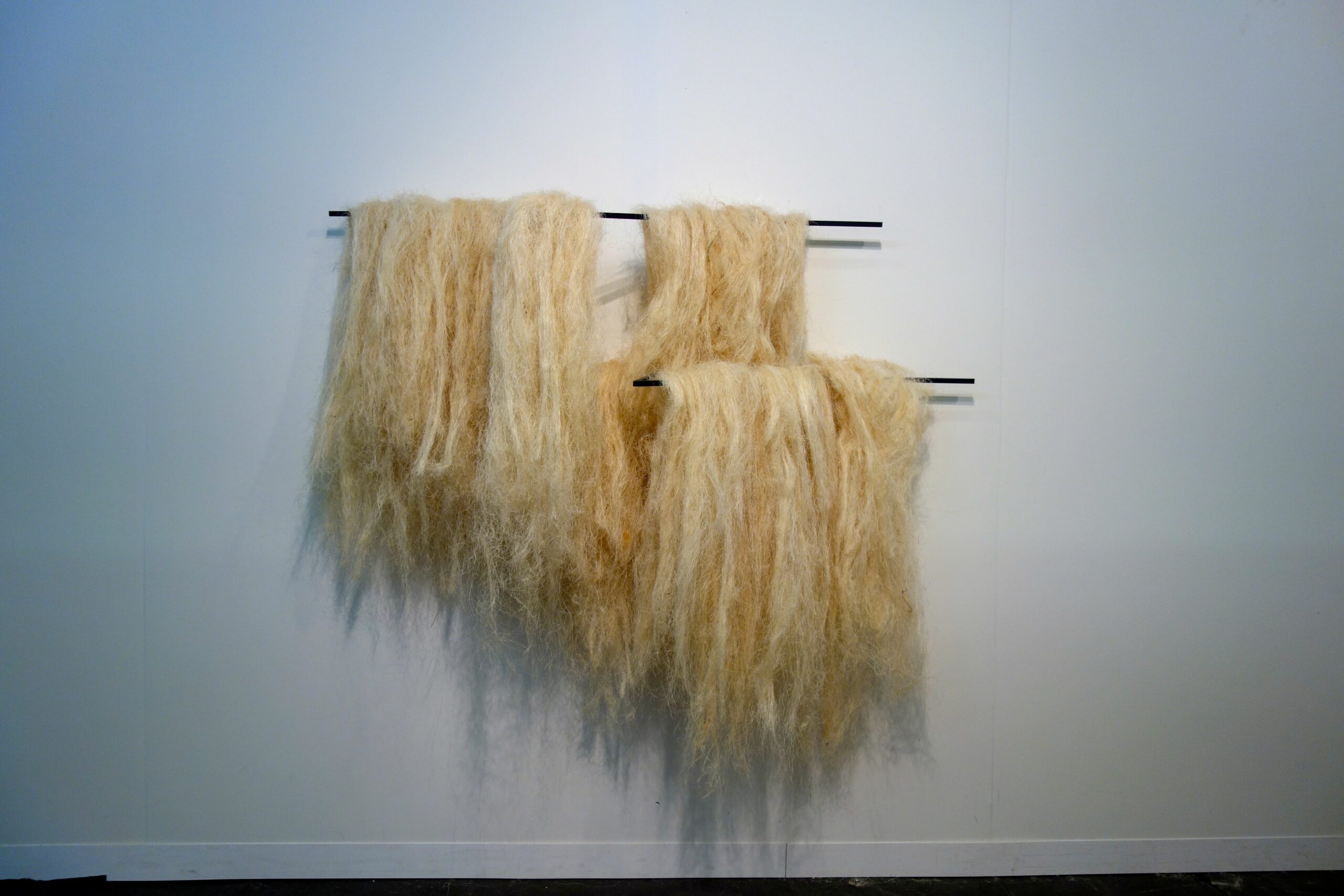 The sculpture will consist of a wooden structure bound together using rope. It is at once a display structure while also referencing the industry of sisal processing, particularly the drying process when fibers are laid on drying beds or drying lines.

The raw material, its processed form, as well as related images, propose different entry points into the investigation of sisal as a material whose history is marked by relations which are multinational, political, social and economic in their character. 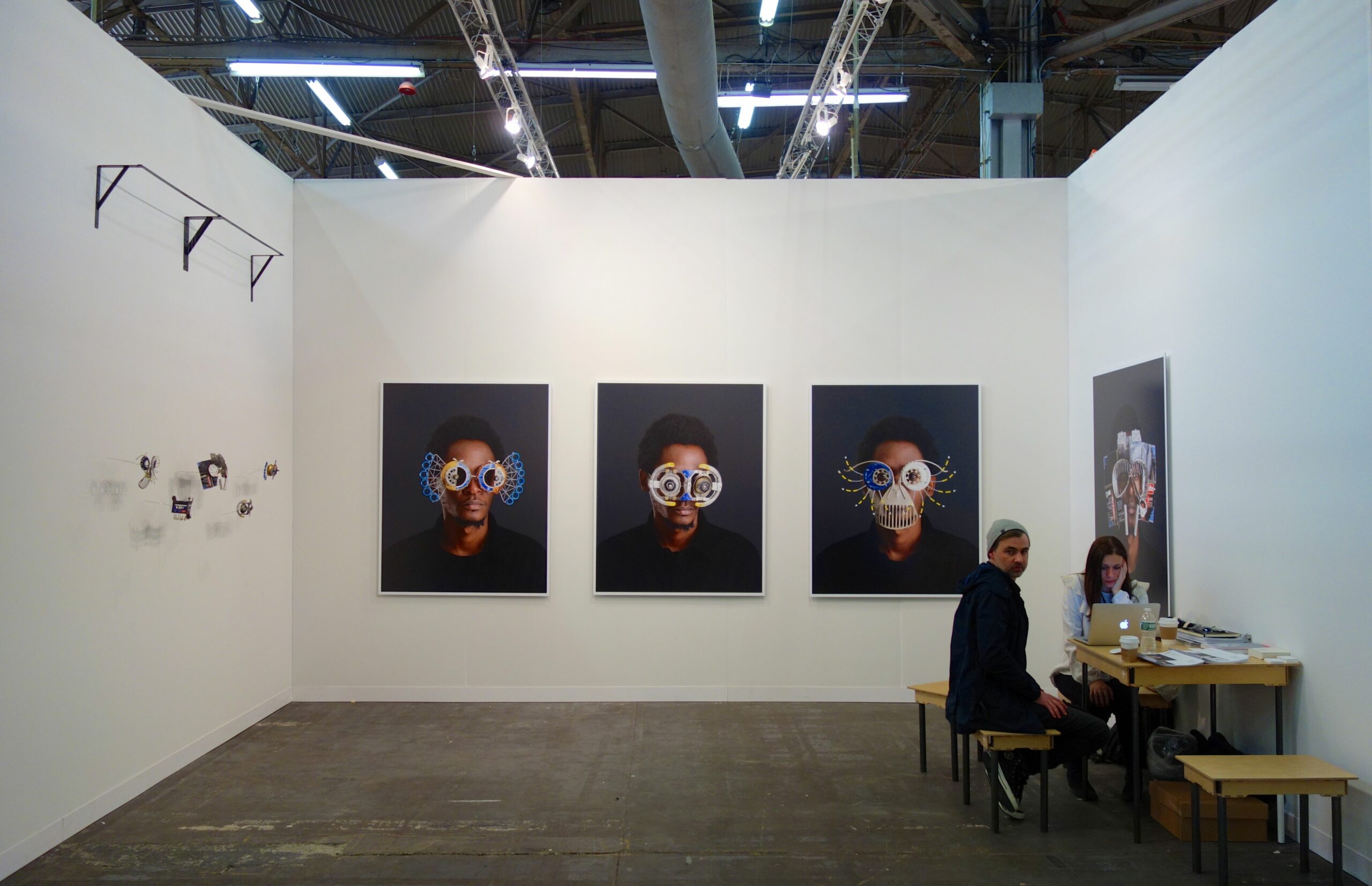 Nairobi-born Cyrus Kabiru has actively pushed the boundaries of conventional craftsmanship, sculpture, fashion, design, art, and photography since his C-Stunner series of ey ewear attracted attention from numerous creative industries in 2011. Kabiru creates intricate sculptural works from the found materials he collects in Nairobi. Producing photographs of himself, the main protagonist wearing his ‘Afrodazzled’ bifocals, Kabiru embraces the transformative aspect of the C-Stunners to form unique identities. 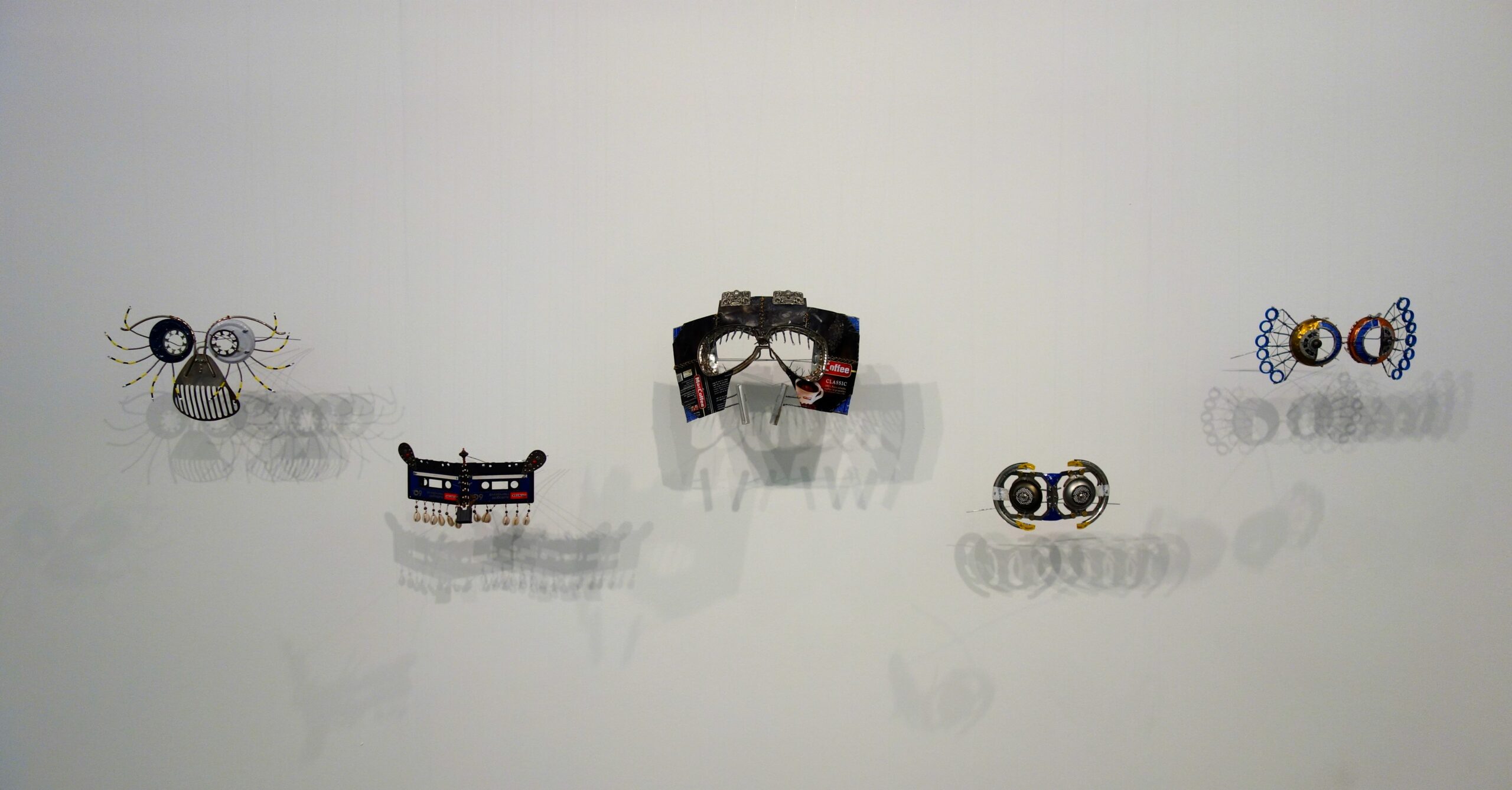 At Armory Focus 2016, Kabiru presents a newly produced series of C-Stunners, which consists of eyewear, masks and editioned photographs, as well as a catalog launch. The presentation reflects on how art, design and craftsmanship intersect in Kabiru’s work, emphasizing how this integration refuses to distinguish between ‘professional’ and ‘artisan.’

Cyrus Kabiru has exhibited in England, the USA, Sweden, Holland, Italy, Turkey, South Africa, and in his home country. Recent notable solo exhibitions include Cyrus Kabiru, Kunstpodium T Gallery, Tilburg (2011) and C-Stunners & Black Mamba, SMAC Gallery, Cape Town ( 2015). Kabiru was awarded the Best Artist Innovation Award at the Maker Fair and was celebrated by Guinness Africa and MTV Base in 2012. In 2013, Kabiru was a fellow at TED’s “The Young, The Gifted, The Undiscovered.” That same year, Kabiru also exhibited at the Lagos Photo Festival in Nigeria and his work formed part of Afrofuture: Adventure with Makers, Thinkers and Dreamers at Milan Design Week, Milan. Recent group exhibitions include Unorthodox, Jewish Museum, New York, USA (until March 27, 2016) and Concealed: Selections from the Permanent Collection at The Studio Museum in Harlem, New York (2015).