Revisiting the heritage of Marrakech

The Poetry of the Crossroads

Carrefour/Meeting Point is wish by curator Alya Sebti to shift centers, and address the intimacy of migrations, finds Sophie Eliot...

There are different ways of looking at a crossroads. You would hardly expect idle strollers there, and yet the space could be a remarkable observation post. The receptive body can take in the comings and goings of people passing by and stopping, making half-turns, conducting the traffic, suffocating, getting lost, selling, and unavoidably having encounters there. The exhibition Carrefour/Meeting Point. The Marrakech Biennale and Beyond at the ifa-Galerie in Berlin, is an attempt by curator Alya Sebti to revisit the heritage of the city of Marrakech, a crossroads between North Africa, Sub-Saharan Africa, the Middle East, and Europe. Far from offering a biography of the Red City, the artistic director of the most recent edition of the Marrakech Biennale wishes to shift centers, reduce distances and address the intimacy of migrations as well.

On entering the exhibition the whispered songs of Clara Meister’s collective project catch our ear. Meister, who was in charge of the biennale’s performance program, conceived Singing Maps and Underlying Melodies, a musical cartography of Marrakech. Hoping to move beyond the chaos of first impressions that bombarded her Western perspective, she invited 35 musicians in collaboration with S.T.I.F.F. and KamarStudios Morocco. Moroccan melodies are enclosed in a white seven-sided plinth, creating a surprise effect that invades the gallery, once the top of a raised column. We almost feel we will find a turntable there, but what we actually see is a low-relief map and a mosaic of the Medina Quarter where the musicians marched during the biennale. Documentation is obtainable in the form of a CD. 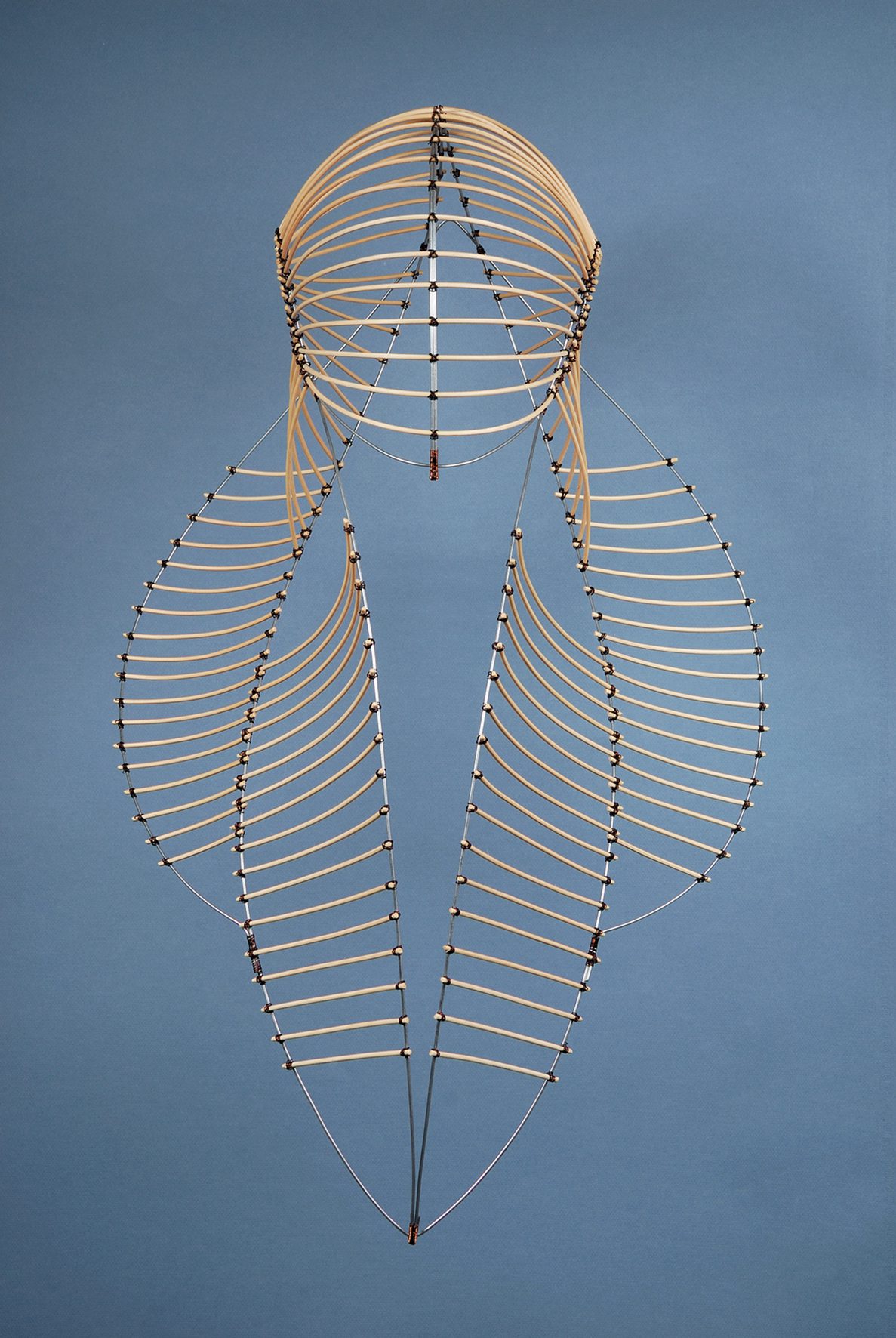 The installation Souvenir: La leçon de géométrie (Memento: The Geometry Lesson) by Saâdane Afif also plays on the idea of sharing a common cultural heritage that is perceptible in everyday life. Afif invited a teacher to offer him and other passers-by on Jema el-Fnaa Square geometry lessons in Arabic on a white board. It creates a translation of symmetrical ornamentation in an iconoclastic society in which geometry is a spiritual link with God according to the rules of the space. One of the panels of the tableau is a model of a carpet where theorems substitute for mosaics in a transfer of forms. Exhibited in the gallery with the little table of mementos – triangles, squares, spheres – the simple juxtaposition only rudimentarily managed to communicate the participatory nature of the performance.

The referential shock is also made vibrant through odors. Every city has its particular olfactory surprises, whether it is the combination of Vespa exhaust pipes and freshly hung washing in the streets of Naples, the aromas wafting out of Russian pancake kiosks in Moscow, or those of flowers and incense when arriving off the plane in Bamako. At an aromatherapist’s atelier in Marrakech, the artist Megumi Matsubara ordered eight scents to match eight phrases from poems she wrote. Diffused secretly, the scents compose the fragrance La Japonaise. They are accompanied by excerpts from his poems like “Wear the wholeness of your skin,” or “These clothes are mine.” Visitors are given one of her garden clichés, the source of inspiration for her texts, a bright red poppy. In her installation Matsubara manipulates the slippages and variations of interpretation that occur in all translations. Given the absence of obvious connections between the written words, the scent, and the illusory fragility of ribbons that stretch from floor to ceiling, lifting the gallery space, it offers opportunities for games of reminiscence, of juggling memories. Matsubara invites us to transcend every quest for instant responses.

The effort to let go can become violent. When the urban explorer engages with the heavy game of drift, losing balance is an inevitable risk. Yassine Balbzioui explores this loss of control in his performance Grosse Tête (Big Head). On the verge of suffocation he covered his head with a cardboard mask dowsed in black paint and confetti and held together with a piece of sticky tape. Beyond playing with materials, Balbzioui is exploring a formal action of his body to the point of exhaustion of the creature it will eventually become, to finally let the layers of disguise fall away.

Alya Sebti’s inspiration for this exhibition was the question she posed for the Marrakech Biennale, Where are we? She is interested in individual life paths, including those of “remigrés” such as herself who were born in Morocco and return to their origins. The result is a largely psycho-geographical approach to the city. With the music of the Médina in our ears and the scents of La Japonaise in our nostrils, going beyond the Marrakech Biennale also means taking account of the socio-political context of displacement, exploring the different terrains of power games such as those of contemporary art.

Max Boufathal’s warrior masks attract us with the perfect symmetry of their curves and their fluid anatomy. The quest for a perfect aesthetic is represented by his alien hybrids or Samurai, Le Serment d’Hippocrate (The Hippocratic Oath) and Le Serment d’Aristote (The Aristotelian Oath) made of malleable linoleum materials with iron and plastic threads that facilitate quick gestures. Boufathal plays with mythologies, hovering between Greek classicism and Hollywood consumerism. Starting from the theory of humors he moves on to theories of contemporary art and its masquerades where he sees the quality of works subjected to the cynicism of its equity ticket and capital symbolized by luxury goods. Part of the Le Projet Mort (Death Project), his masks are part of the arsenal for preparing a putsch on the contemporary art scene. And it’s not a joke. Each stage is carefully planned, from casual infiltration via auto da fé to final assault. This work is chilling, with its perfectionism reflecting the cold, murderous meticulousness of weapons. 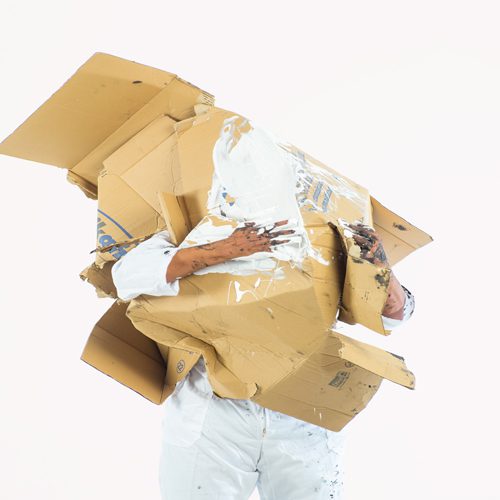 Moving on from the imagined symbolic war, at the back of the room we reach the market of sufferings, the video Crossings by Leila Alaoui. She spent three months listening to migrants who fled from Sub-Saharan Africa to get to Europe. Due to the law on “illegals” the crossroad of Marrakech became their enforced place of residence. In reaction to the racist front page of the weekly MarocHebdo with the headline “Le péril noir” (“The Black Peril”) in 2012, she decided on an aesthetic message addressed both to their dignity and to our own vulnerability in listening to them. Far removed from exoticizing visual effects, Alaoui presents what she calls an “immersive audiovisual experience.” In this triptych, with shirtless men or black-clad women, the contours of refugee bodies are blurred in the black depths of the video, the faces are withdrawn. Survivors’ voices whisper accounts of their traumatic experiences during the journey, about growing racism toward them. After the undulations of desert sands and the branches of forests, the waves of the Mediterranean surge, drown, and send their souls drifting.  At the end of the video, like the searchlights of a boat, spots of light softly caress the bodies. The aesthetic Alaoui chose is stretched tight like a safety net without getting lost in voyeurism or victimization. As an artist and activist, Alaoui realized that raw, unmediated images of suffering make viewers turn away quickly. When cruelty loses its anonymity, the poetry of the body takes over to sustain our attention.

Carrefour/Meeting Point is a well-conceived exhibition in a space that is difficult to structure, that plays on different levels of absence and presence. It is also an example of successful cooperation with a public institution of a foreign ministry without falling into the mythology of stereotypes and of semiological repertoires of difference. In terms of similar curatorial approaches, this exhibition could well be located in the same vein as the exhibition Maputo – A Tale of one City (Oslo 2009, Harare 2011) co-curated by Bisi Silva, Marianne Hultmann and Daniella van Dijk-Wennberg, and organized during the festival Africa in Oslo. Responsible for the Portuguese-speaking countries Angola, Mozambique and Zambia, the curators discarded the usual politics of continental or regional representation of the local, and defined a country, Mozambique and then a city, Maputo, as their reference point. In that exhibition they prioritized an understanding of the local expressed in terms of the individual narratives of seven artists (1) living in Maputo.

Destabilizing fixed points means taking up the challenge of working with the subjective mappings and their realities that Carrefour/Meeting Point has adopted. For, in the words of the writer Chimamanda Ngozi Adichie, there is no unique individual history of any person or place. But the stories can, indeed, humanize and restore dignity. Stories matter. Carrefour/Meeting Point reminds us as well that contemporary art also consists of the stories of disparate aesthetic and poetic impulses that every city harbors.