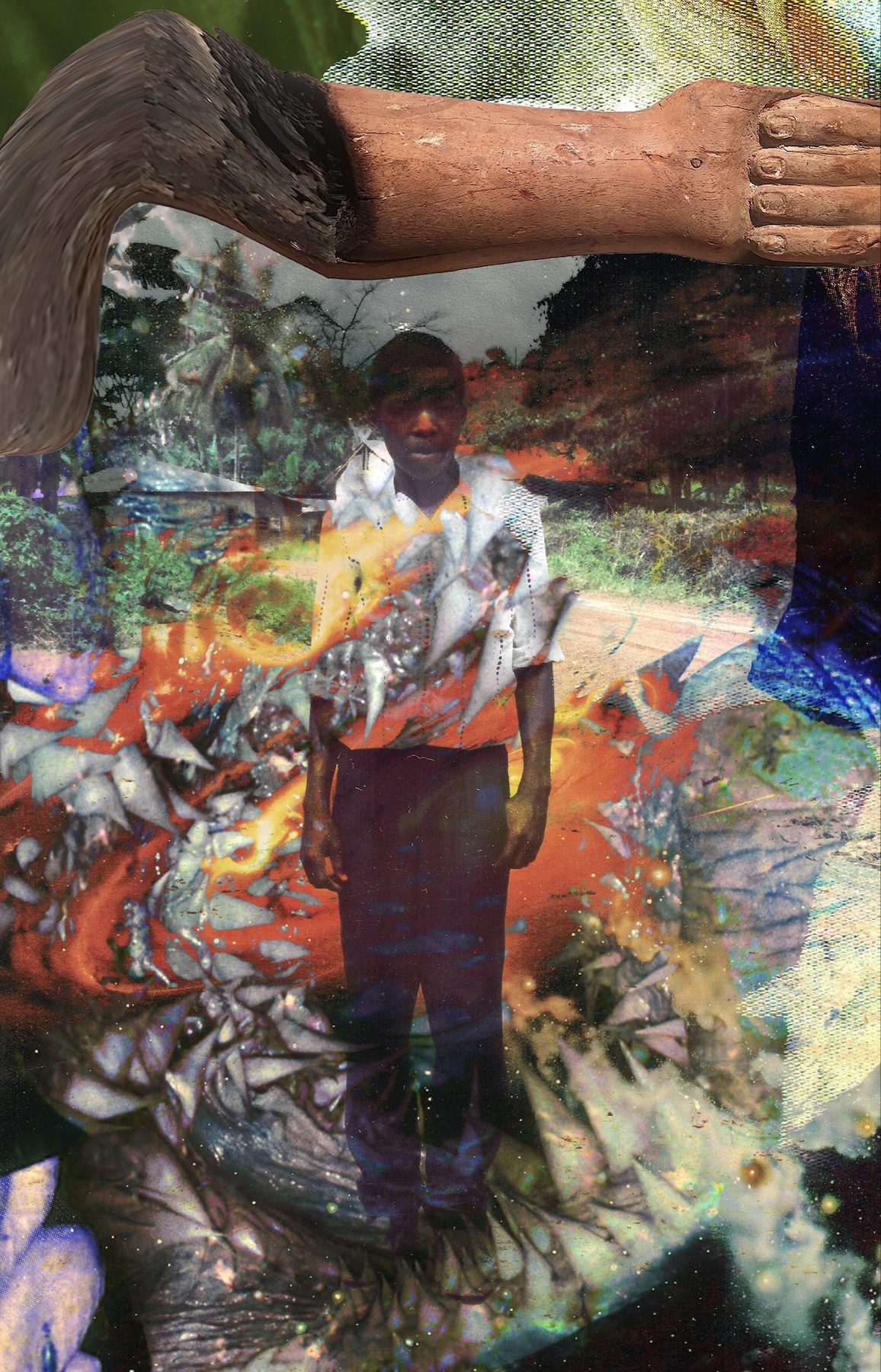 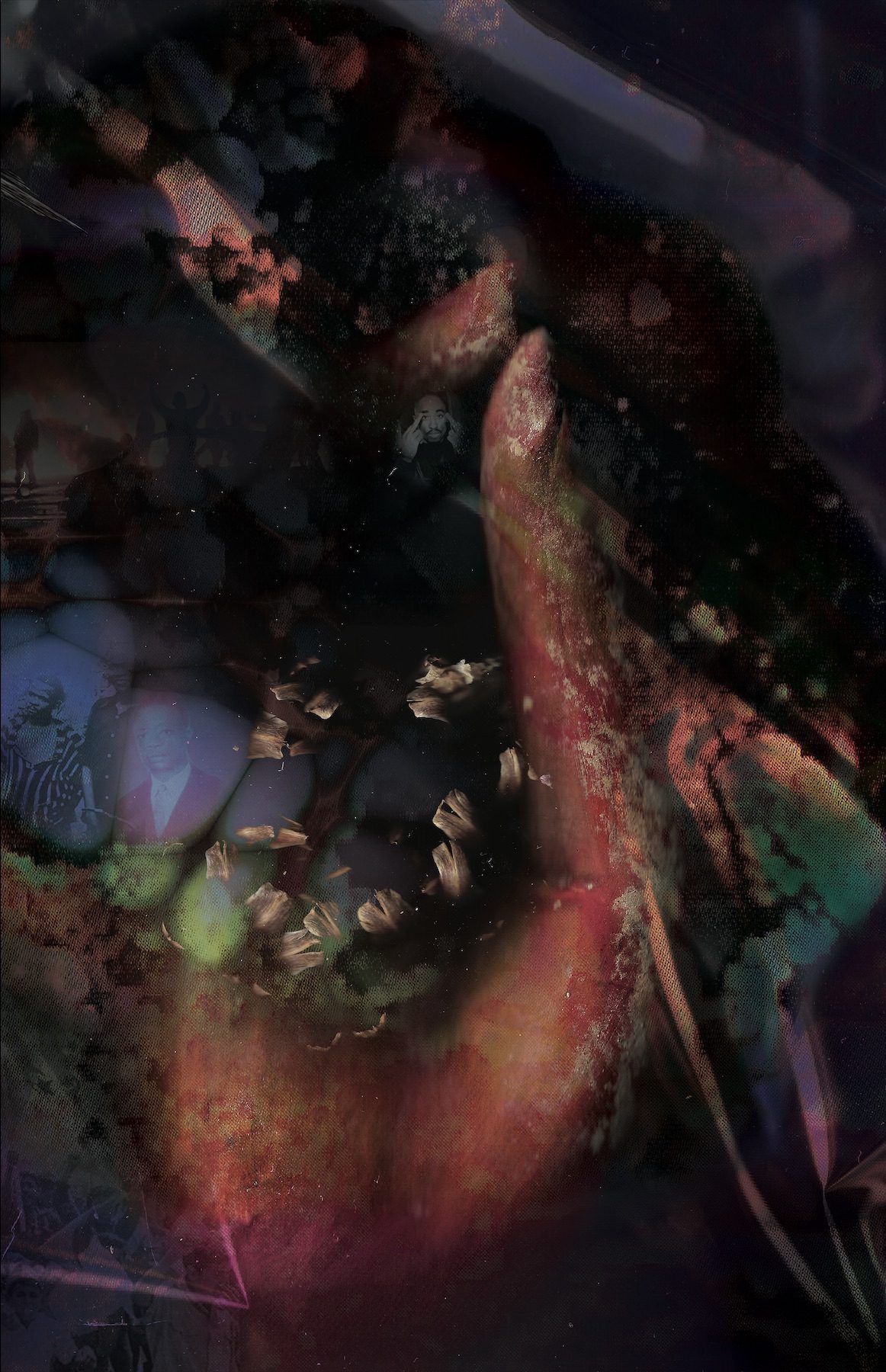 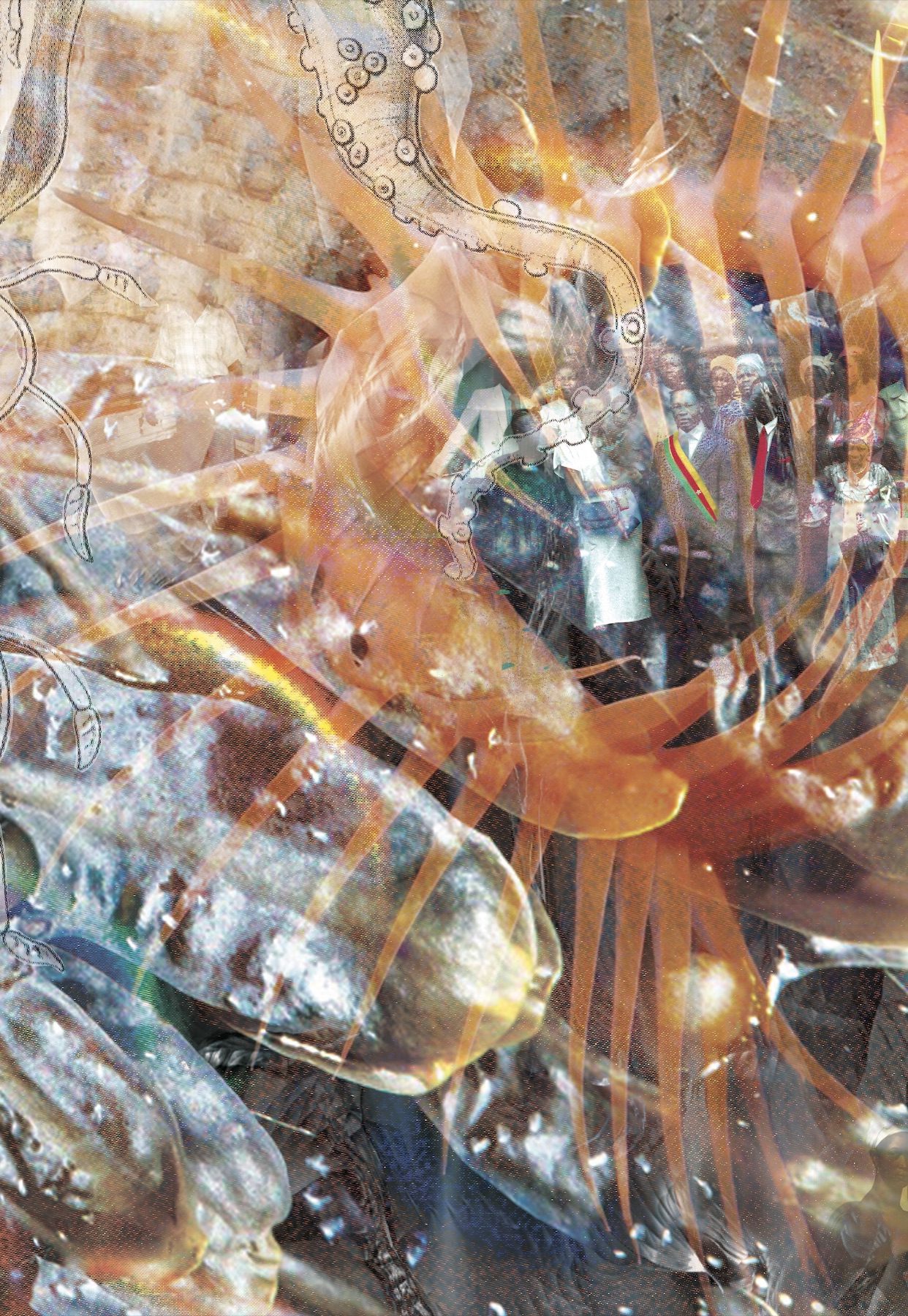 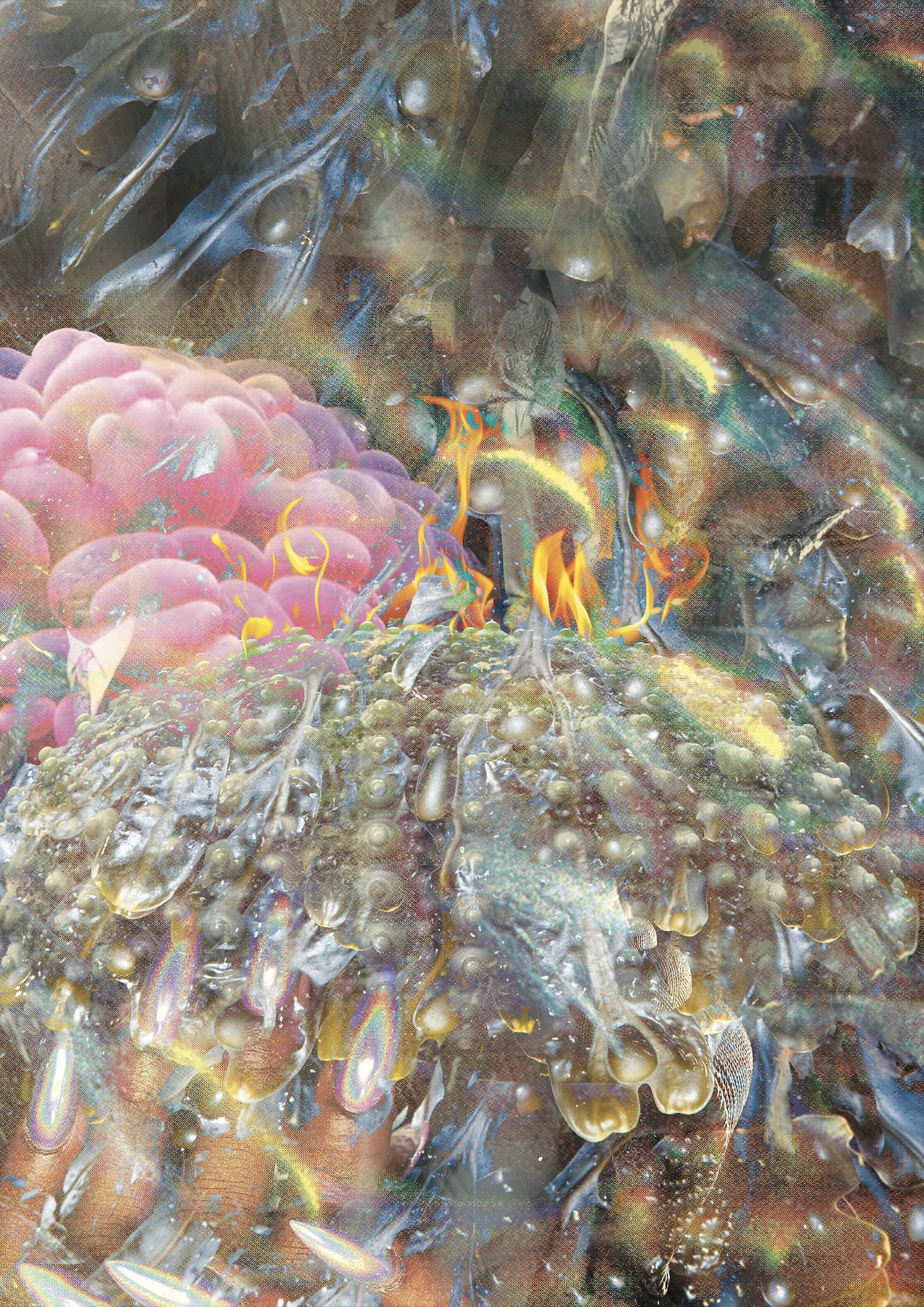 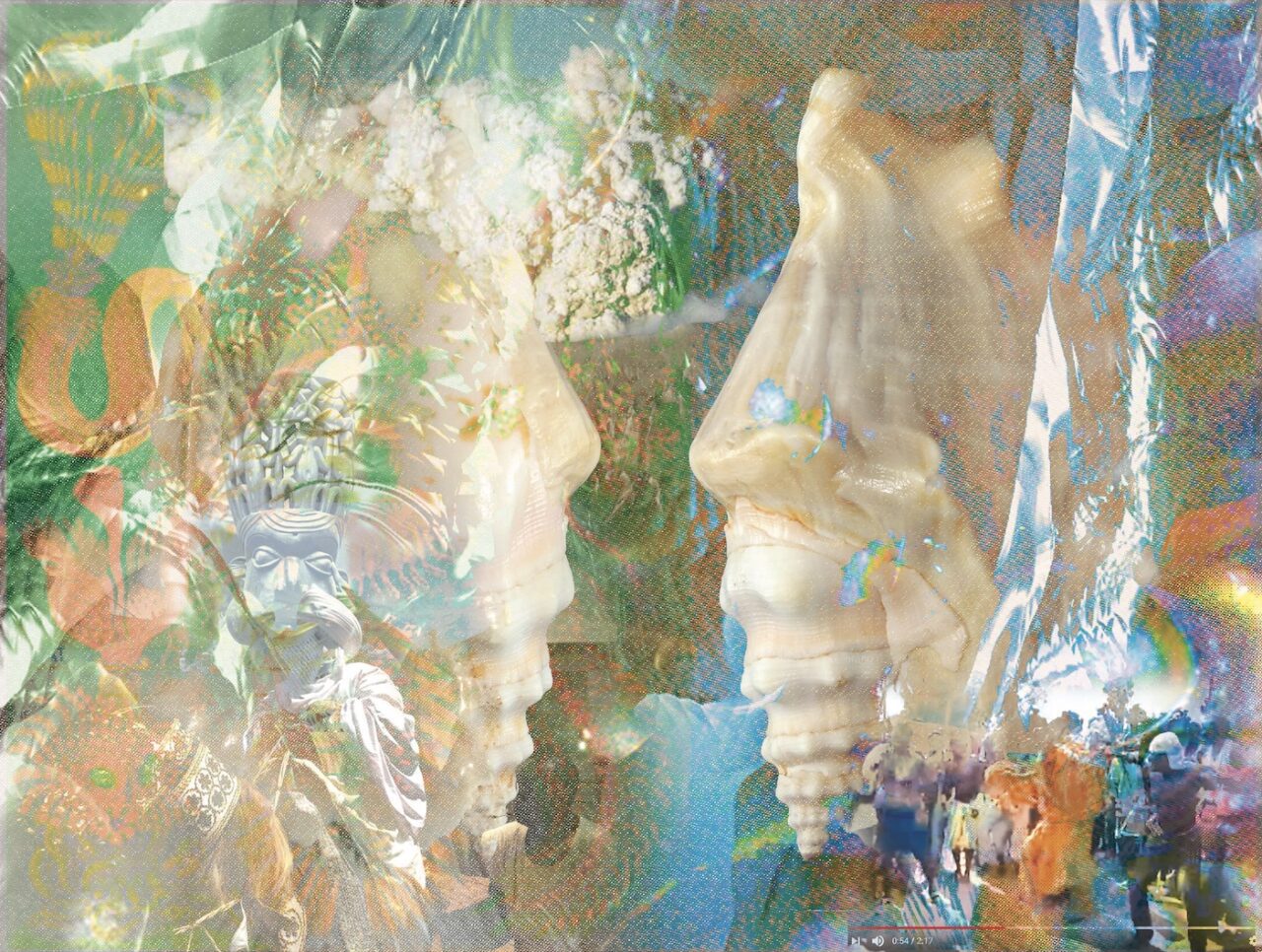 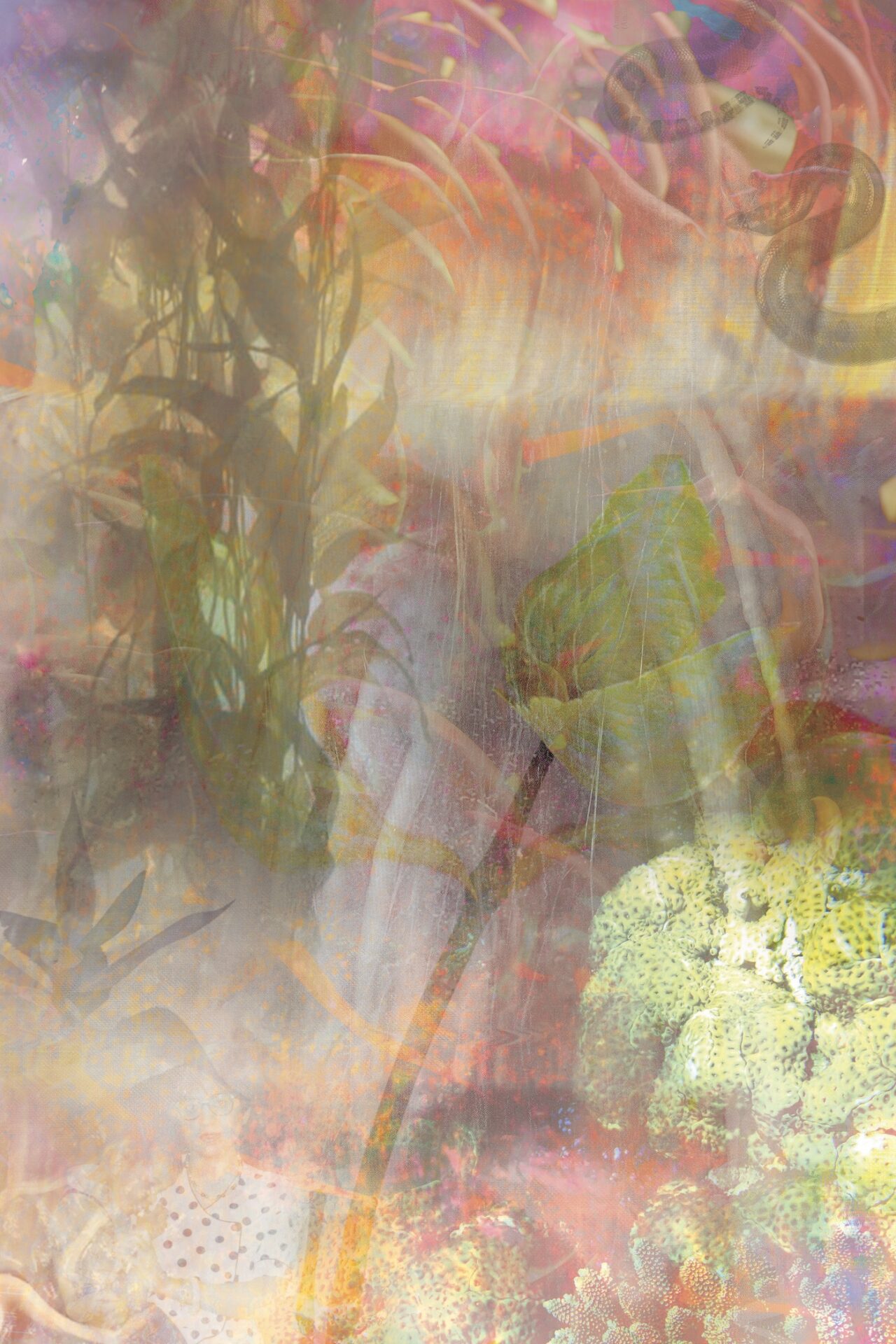 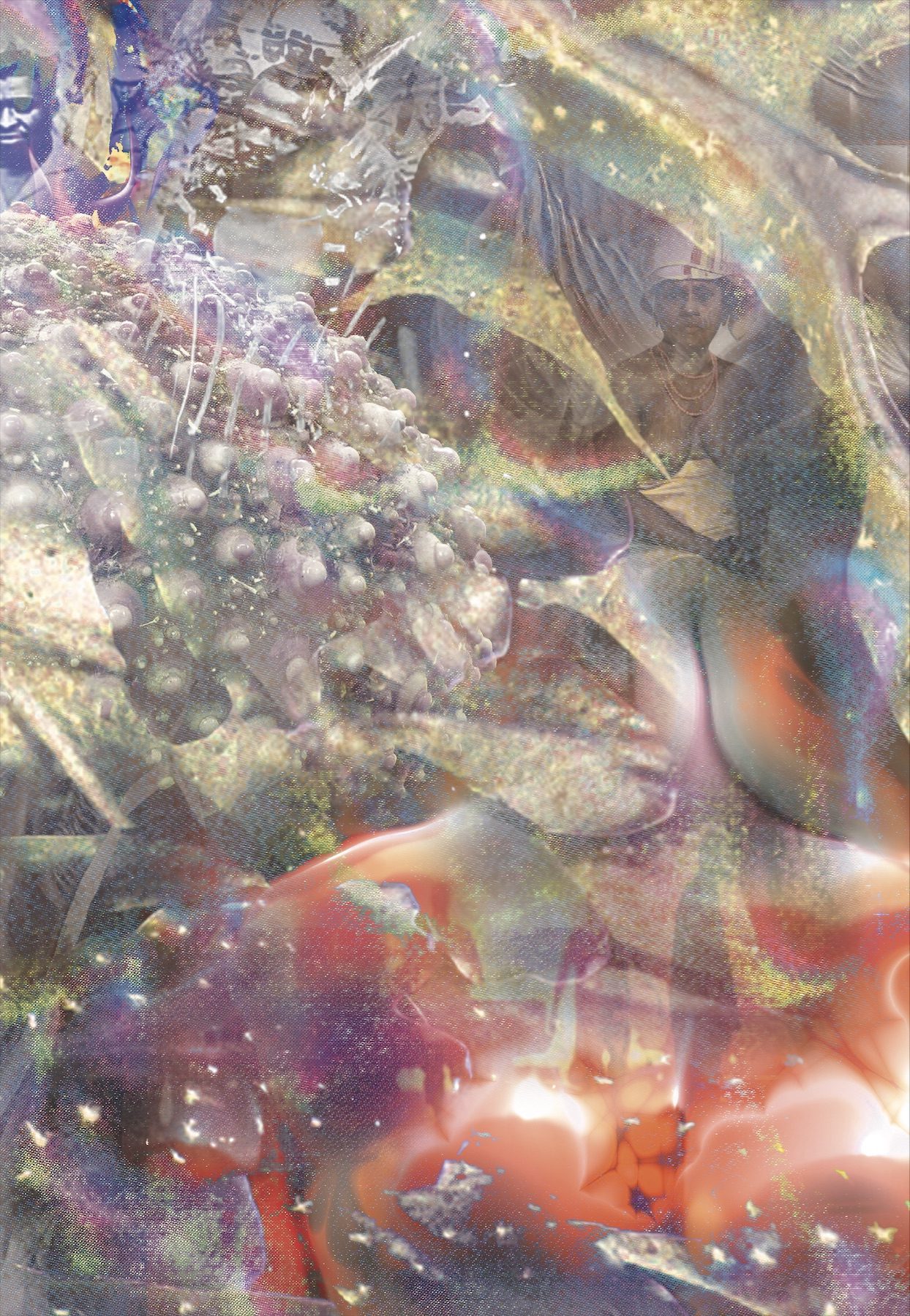 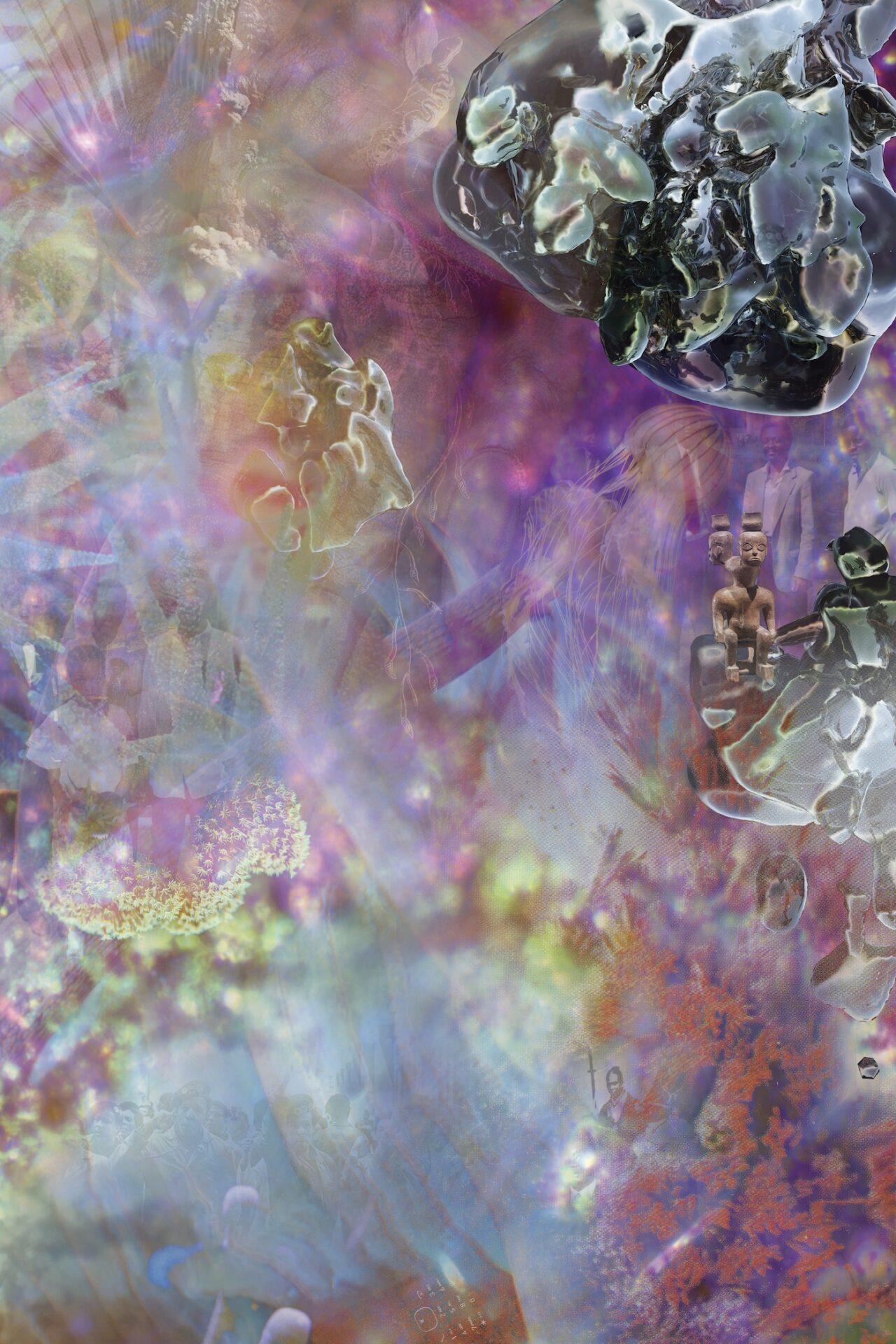 Josèfa Ntjam is an artist, performer, and writer exploring concepts of fluidity through biology, African mythologies, and sci-fi. Will Furtado spoke to her about deconstructing classifications, ancestral rituals, and what we can learn from the ocean and underwater life.

Contemporary And: From water to climate change, you engage with the non-anthropocentric in your practice. How did that interest develop and what can it tell us about humans?

Josèfa Ntjam: My interest in water developed from my research into fluidity and hidden memories. I’m particularly interested in the political and utopian dimensions of seas and oceans, the receptacle of many stories of domination – slavery, colonization, capitalism, environmental crisis – but also the origin of an important number of myths and emancipatory stories in many cultures. My work often refers to water as an element that evokes permanent transformation and movement, an ungraspable substance that has the ability to symbolically teach us humans how to become ungraspable ourselves, how to upset the processes of identification and assignation that dominant discourses attempt to implement to maintain power. Beyond water, I often refer to plants, animals, and organic materials and substances found at a microscopic level – molecules, particles, etc. – as I’m interested in how their evolution and techniques of survival and multiplication reflect certain modes of resistance and action that have been used by minoritarian and oppressed groups of people across history. If you study them closely enough, plants and animals can teach you a great deal about resilience and resistance. So the non-anthropocentric dimension of my practice consists of dissolving the separation between human and non-human, between nature and history, which are two processes that are always already intertwined. I think our perception of nature – encompassing every non-human within a single term – is really revealing of the way in which dominant groups of people assign specific positions to the other, and this is one of the power mechanisms I attempt to deconstruct in my practice.

C&: You work across various mediums and materials. How do you make these decisions?

JN: The stories I’m telling are the main structure of my work. My creative process usually begins with writing – for performances and videos, but also fictions that I use to build up my own personal mythologies. After that I connect the dots in a sort of organic constellation, and then I choose the medium that seems most suitable to treat the subject. It’s a bit hard for me to explain these decisions as I’m working in a very empirical way – all the productions are connected to one another and I don’t give more importance to one medium over another. If I try to explain my creative process, I could say that, at the beginning, most of the forms and shapes I create come from a numerical/digital environment – such as images edited on Photoshop, 3D modeling – that I assemble to compose my photomontage. I create a sort of universe with characters (family archives, plants, deities, landscapes), and then I extract objects from that universe and give them IRL shapes, such as ceramic sculpture, a narrative for the films made of pictures that I put in movement, a print for the photomontages, and sound for the orality of my mythologies.

C&: What are some of the African mythologies, ancestral rituals, and science-fiction you have explored in your work?

JN: The African myth that appears most frequently is that of Mami Wata, who is well-known across the continent (Cameroon, Congo, Mali, Ghana, Benin…). Her story is multiple, and so is her character and her name; she is alternatively and/or simultaneously monster, mermaid, dangerous woman, savior. Also, I like the fact that, in certain aspects of her mythology, her/his gender is fluid. Mami Wata has as many stories as there are people telling it. When I was a child, my relatives recounted her story as a threat for children, and later I realized that adults were scared of her too. The way I decided to use this character in my work is also political, in relation to decolonial movement and thought. For me, Mami Wata is a figure of anti-colonial revolt who struggled against colonial invasion by crashing slave ships, helping slaves in the abyss, giving them second lives. This character is the memory of an abyssal depth.

I explore a lot of different science-fiction stories, from Octavia E. Butler to Battlestar Galactica to Isaac Azimov’s novels. I often use the concept of the “spaceship in perpetual movement” that comes from Battlestar Galactica. This spaceship is forced to move constantly to escape the enemy, and the question that arises is How to construct something in common on a piece of land that is in perpetual movement? This question links back to the way I try to deconstruct the concepts of origin and authenticity. When you are forced to move in many different ways, things are less fixed, spongier, and what emerge as a result are hybrid forms, the need for dialogue, using syncretism and “plugging” (branchements or connections) as forms of construction.

C&: There are many underwater references in your work. Why do they interest you and what can they tell us about the world we live in today?

JN: As I said, seas and oceans have received many stories of domination. The Atlantic Ocean was crossed by slave ships, witnessing death and a radical turn in global history. If we consider the ocean as part of history, it can also be seen as a site of rupture in terms of identity construction and historical narrative. From this rupture, new communities were born, forced to construct new narratives and identities in a land to which they did not originally belong. But it is as if their memories remained somewhere underwater. We can see this in a lot of different ways, including in music. I’m extremely interested in Drexciya as the symbol of this ancestral reconnection, established through sound, frequencies and vibrations inspired by the sea and the abyss, through which they allow the oppressed to speak. They’re connected with the historical rupture that emerged from the crossing of the Atlantic. In a way, what they say is that the dead are not dead, and we decided to re-establish a dialogue with them. Drexciyan people, although fictional, represent the memories that colonizers believed they killed: but we escaped, even crawling.

Also, I consider abyssal depths to be the bearer of potentials for dissension. This is the place where revolts are born, before emerging in broad daylight and overflowing in the world. Finally, the underwater world is still very unknown and escapes a lot of standards in terms of plants and animals (my most recent piece, shown at the Palais de Tokyo, is called Unknown Aquazone, which is also the title of Drexciya’s fourth album). At the same time, many living beings in this in-between upset the rules of classification that we can link back to the theories of races. So the world underwater is both a source of artistic inspiration and proof that many of our preconceptions about life and existence are still very limited.

C&: Could you speak about the works and concepts in your upcoming exhibitions?

JN: This year I have the impression that I passed a stage in terms of the conception of my work. It began with a residency in Canada for the project Drift: Art & Dark Matter, with the Agnes Etherington Art Center, SNOLAB, and the Arthur B. McDonald Canadian Astroparticle Physics Research Institute. It gave me the occasion to work with physicists and to do research on quantum physics – which I think has such a great philosophical and social significance. From this I initiated a new body of research on infinitely small, microscopic views of plants and rocks, through which I found interesting ways to make my visual universe tend towards something more organic.

I’m currently working on a series of new visuals for my upcoming solo exhibition at Nicoletti in London, which will open on 16 June. There I’ll show photomontages in which I use new digital materials and techniques such as 3D HandySCAN, scans of plants and microscopic views of vegetal elements. I’m working on these visuals as I would with an object, trying to find new textures through the printing technique and the materials that I superimpose on the surface. The logic of my work will continue to explore similar territories – personal mythologies and family stories mixed with histories of independence and revolt, all combined within organic landscapes. For this exhibition, I’m also working on a new series of ceramic sculptures representing aquatic plants and creatures inspired by German biologist Ernst Haeckel’s book Art Forms of Nature (1899). With these sculptures I’m creating hybrid beings through which I question the traditional modes of classifying species that mirror hegemonic discourses on identity and race in Western cultures.