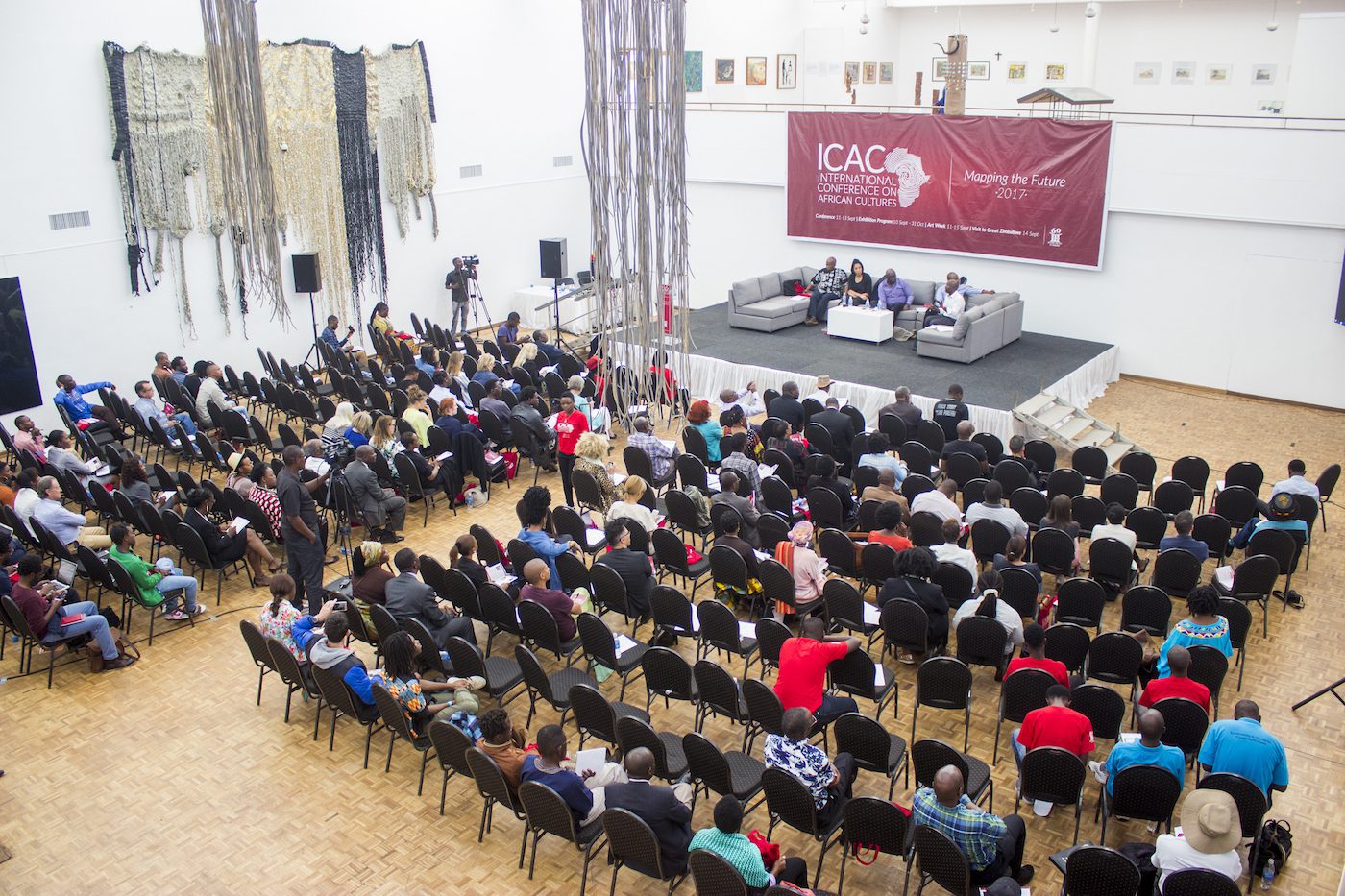 How a Historical Art Conference in Africa Was Restaged

The International Congress for African Culture (ICAC) brought scores of international art practitioners and scholars to Southern Rhodesia (now Zimbabwe) in 1962 to discuss the global influence of art from Africa. Despite taking place in a still colonized territory, the event went on to change the course of the arts on the African continent. However, this happening almost fell into oblivion if it hadn’t been for Raphael Chikukwa and his team who restaged it in 2017. Here writer Percy Zvomuya talks to the curator about the importance of reviving African history and the similar challenges many art sectors in Africa still face.

Percy Zvomuya: What was the inspiration behind restaging ICAC? When did your interest in the original conference begin?

Raphael Chikukwa: I joined the gallery in 2010, and one afternoon as I was going through the drawers in my office I came across dusty books, specifically the unpublished manuscript of the deliberations of the International Congress of African Culture of 1962. I dusted off one book while wondering what this book was about and why it did not have a cover. Overnight, I went through it and the next day showed it to my boss, Mrs. Doreen Sibanda, to ask her opinion. We were all fascinated with what transpired and got to dig deeper into the National Gallery of Zimbabwe’s archives where we found photographs, newspaper cuttings etc. Later on we mooted the idea of having a pavilion at the Venice Biennale, an idea which eventually took shape in 2011 as Zimbabwe’s first ever participation in this grand event. While in Venice, we kept on interrogating the 1962 intervention by McEwen.

The original idea was to host a revival in 2012 but it was not the right time. In all these years we have been talking about the need to host a similar event. We thought if they managed to do it in 1962, inviting people like Alfred Barr, then director at MoMA, South African artist Selby Mvusi, and many others, there is nothing that can stop us from restaging this event. Especially after having taken Zimbabwe to Venice, we needed to bring the world to Zimbabwe to understand the context we are working in. Holding the event in 2017 was the right moment and right time.

PZ: The preferred formats for art events on the continent and elsewhere seem to be the biennale and the art fair, so why did you decide to hold the event as an indaba – a conference?

RC: There was a need and motivation to create a platform for discussion in this country. We travel to many events in Europe and the United States where we discuss Africa but not on African soil. In our own view this does not make sense. We know there are the Dakar Biennale, Bamako Encounters, Joburg Art Fair, Cape Town Art Fair and other platforms. We deliberated on the format, taking into account that we don’t have a platform dedicated to dialogue. The chance to bring African scholars, artists, curators, heritage professionals, policy makers, and other museum professionals who are involved in projects in Africa to Zimbabwe for ICAC 2017 was such an attractive prospect. We wanted to replicate ICAC 1962 as well as create a new platform for Africans to deliberate on the issues that affect our practice here on African soil.

As the ICAC 2017 team, we wanted to restage McEwen’s good idea with a new crop of artists, curators and art scholars. It took 55 years for the right time to come and I would like to thank Mrs. Sibanda, the executive director, the gallery board, and the National Gallery of Zimbabwe team for making this historic event happen. The gallery is celebrating its 60th anniversary in 2017 and we thought it was an opportune moment to do something different.

When ICAC 1962 was held it was during the nationalist uprising in then Southern Rhodesia, the time of liberation movements, when other African countries were gaining independence. And yet Frank McEwen, a white man, was able to bring all these scholars, curators and museum professionals to the continent. When we were planning the conference we hoped it would open up new opportunities for this country and for the continent at large.

PZ: The tagline for the conference was “Mapping the Future”. Why that?

RC: As we are all looking towards the future we thought it was the right theme for this second edition. However, you cannot look into the future without looking into the past because it’s the past that informs the future.

PZ: The past was the theme of the 1962 conference, which was also called the “Festival of African and Neo-African Art and Music and Influences on the Western World”.

RC: We need to recognize that our ancestors were artists long before the Western traders and explorers arrived here. The colonial education that we Africans went through made us look to the West more than we look at ourselves. We don’t look inward at all and it’s high time we begin looking at our past. We don’t usually talk of ourselves as us, about where we are, where we are going, and where we are coming from. [In hosting ICAC 2017] we wanted to bring scholars and curators to Harare to discuss about these issues.

PZ: What struck you about some of the discussions?

RC: It was important to understand how diverse the continent is but also to realize that the challenges we face in Zimbabwe are similar to those faced in Kenya, South Africa, Zambia and other places.

The challenges we face as African galleries and museums are critical and the future of cultural institutions remains a critical issue across the continent. The issue of funding national institutions was raised in some of the discussions and as cultural workers and governments there is a need to rethink our strategies. Most of these institutions are underfunded and this is something that our authorities should look into if we are to remain relevant in the global art scene. In the conversations it became obvious that many countries in Africa don’t have national institutions that can represent their cultures, and this is sad. In Zimbabwe we are lucky to have these galleries that the colonial state built but the challenge now is to make them relevant to the community and to increase our audiences.

PZ: Are there plans to hold another conference?

RC: We should not wait for another 55 years for the next conference. Several participants thought the idea of a conference is unique and we should continue with it and not think of a biennale. For a long time we have been passengers on our own ship. But instead of waiting for something to be organized in Berlin, London or New York, we need to build our own platforms. This platform is for African scholars, museum managers and heritage professionals to interrogate our issues on African soil.

Percy Zvomuya, a writer and editor, has been researching the 1962 International Congress of African Culture since 2014. In September 2017 he was a mentor for the C& Critical Writing Workshop which was held in Harare and made possible by the support of the Ford Foundation. The piece will be also published in a forthcoming issue of Chimurenga magazine dedicated to Black conferences.