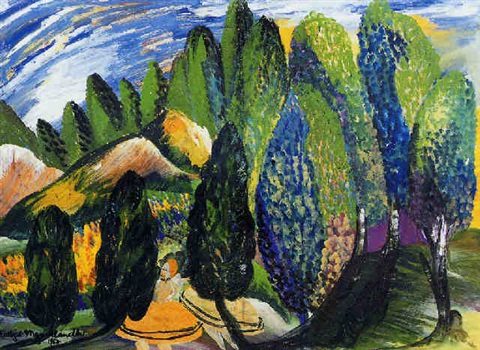 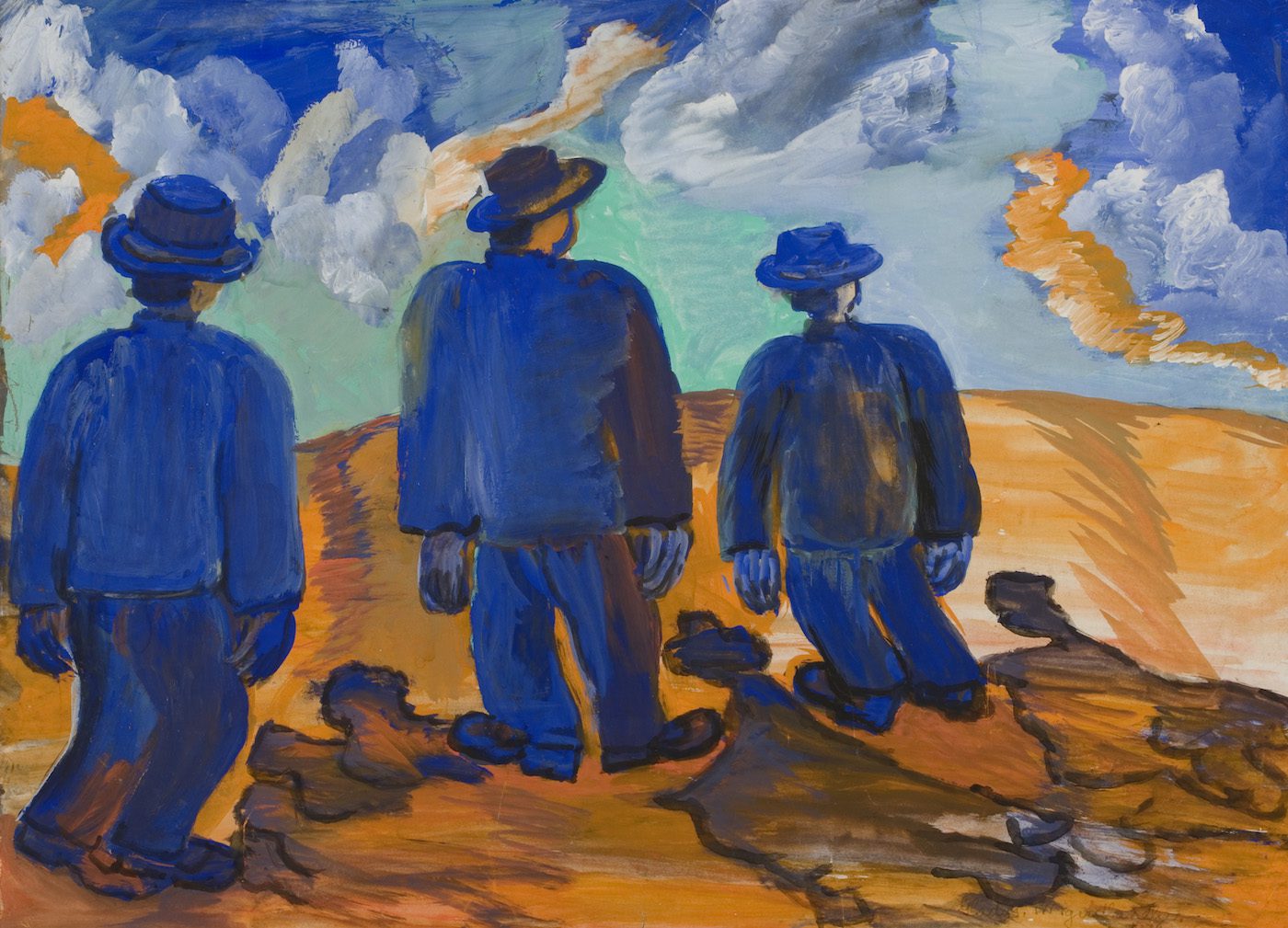 In our latest series – Female Pioneers – we look at female artists from Africa who have made great contributions to art on the continent. Here our author Khanya Mashabela reflects on the oeuvre of Gladys Mgudlandlu, who is recognized as a pioneer painter in South Africa: She was one of the first Black women in the country to enter the predominently white art world in the 1960s.

Gladys Mgudlandlu began her artistic practice in her childhood years, as a muralist and clay sculptor in the Xhosa tradition. She was born 1917 in Peddie near Grahamstown, South Africa, and in the early 1940s moved to the Cape Province, where she had a long career as a teacher. Her professional painting career started in 1957, after the death of the grandmother who had raised her.

It is part of the Mgudlandlu legend that she would paint by paraffin lamp in her home at night after teaching, even after she had gained access to electricity. This choice is visible in her paintings, through her shadowy use of light in contrast to vibrant color. Another part of Mgudlandlu’s artistic legend was her relationship with birds, often depicted in her paintings. She came to be referred to as uNontaka – the Bird Lady.

Mgudlandlu’s relationship with the art world was complex. She sold her work to a wealthy, white clientele who praised her as a naïve, folk, or outsider artist painting rural scenes that they perceived as idyllic and pastoral. In contrast, Bessie Head, a prominent writer and a part of the Black Consciousness movement in Southern Africa, was one of a few Black writers at the time who criticized her work for its lack of engagement with the oppression of Black people living under the Apartheid government. Further, by choosing to portray townships and rural areas without representing the pain inflicted by the state upon those who lived in them, Head felt Mgudlandu was working in support of the oppressive government in exchange for the approval of her white collectors. Both interpretations of Mgudlandlu’s practice reduce the complexities which existed internally, within her formal compositions, and externally, as part of the art world and market which contextualized her practice.

While Mgudlandlu’s paintings could be perceived as idealizations of the landscapes and people she depicts, a closer look shows that there is an intentional strangeness in these representations. When essentialized as the work of a naïve artist, created through intuition rather than deliberation, these formal choices are easily glossed over. For example, her landscape paintings of townships convey a sense of chaos and disorder, the lines of the walls and roofs of their homes overlapping each other and angled impossibly. They play upon the rules of perspective. If one believes that she simply does not know those rules, one misses the claustrophobia Mgudlandlu expresses, as well as the mournfulness of the gaping flat black windows and doors. Her aerial perspective, which she compared to the perspective of a bird flying overhead, can be interpreted as her own expression of dissatisfaction with these living conditions, and a desire for liberation.

This interpretation is strengthened by a comparison of her township landscapes to her rural landscapes. In her rural paintings, the lines of huts and hills become more softly curved – except when she impresses upon us the rugged power of the mountains. We are shown people, all Black, with sinuously shaped bodies but also mostly faceless. Where there are faces, they often appear mask-like and unaffected. It is interesting that the birds which appear in her work often have more expressive eyes than those of the people. Perhaps the charge that Mgudlandlu ignored the struggles of Black people in her work can be attributed to her own struggle to relate to others in the way that she was able to relate to nature. Even so, all art is political and a comparison of her township works with her depictions of rural areas make it clear what she thought about the Apartheid government’s forced removal of Black people from their expansive, rural homesteads to crowded, urban settlements. Of course, this messaging is not as direct as it is in the Resistance Art that we associate with the Black Consciousness movement. Bessie Head is correct that Mgudlandlu’s career was primarily geared towards her individual, commercial, and artistic success rather than political aims.

Her audience was a milieu of white art professionals and collectors, and she received significant acclaim within these circles, producing successful commercial exhibitions and garnering media attention. David Koloane analyzed the effect of the demands of a predominantly white art market on the work of Black artists in “The Identity Question: Focus of Black South African Expression” (1993). This essay describes how that market, out of a desire to see its constructions of Blackness reflected back at it, created a mythologized, “authentic” artistic identity which was imposed as a standard for good “Black Art.” This meant that artists like Koloane, Gerard Sekoto, and George Pemba, who created works that explicitly played upon the Modernist tradition or used the urban as subject matter, were deemed inauthentic. It becomes clear then why an artist like Mgudlandlu, who painted landscapes and had a reputation as the “Bird Lady,” was perceived as a self-taught outsider artist despite the sophistication of her compositions and an apparent understanding of the Western traditions of Impressionism and Expressionism.

These complexities did not fit into the narrative of the “authentic” African, relatively untouched by the New World, creating through intuition and spirituality rather than intellect. While Mgudlandlu may have been complicit in maintaining this false narrative, it can be almost entirely attributed to the socioeconomic and political conditions in which she lived and worked. Her success indicates that she related to her audience in the way that was needed in order for her to create the kind of art she wanted to make. This individualistic motivation was politically loaded in the context of a Black artist in Apartheid South Africa, even as it is largely taken for granted as one of the privileges of being a white artist working in the Western tradition.