Among black women artists from Brazil, she is one of the few who discusses a closeness with the sacred in her practice. Her latest exhibition in São Paulo unveiled some of her works to the public.

For nearly a century, Afro-Brazilian religions have been providing inspiration and expressive direction for many Black artists. With strong aesthetic appeal, Candomblé inspired the artistic production of Mestre Didi, the priest-artist for whom tradition and memory marked the points of departure of his creative invention. Entities of Umbanda appear represented in paintings by Heitor dos Prazeres. If Rubem Valentim, Emanoel Araújo, Edival Ramosa, Ayrson Heráclito, Antonio Obá, Moisés Patrício and Jaime Lauriano are among those who maintain a closer or further proximity with the universe of the sacred, there are few known black women artists who include these elements of Afro-Brazilian religion in their work.

One of them is Maria Auxiliadora (1938-1974), from the state of Minas Gerais, and another is the Bahian Eneida Sanches (Salvador, 1962), nominated for the Pipa Prize in 2015. Auxiliadora chose the figurative and colorful description of religious scenes; Sanches, for the most part, opts for abstraction, even if recognizable objects like clothes, shoes, people and animals often appear in some of her works. This was notable in the recent exhibit Transe-Deslocamento de Dimensões, with curatorship by Marília Panitz, at the Andrea Rehder Gallery, in São Paulo. 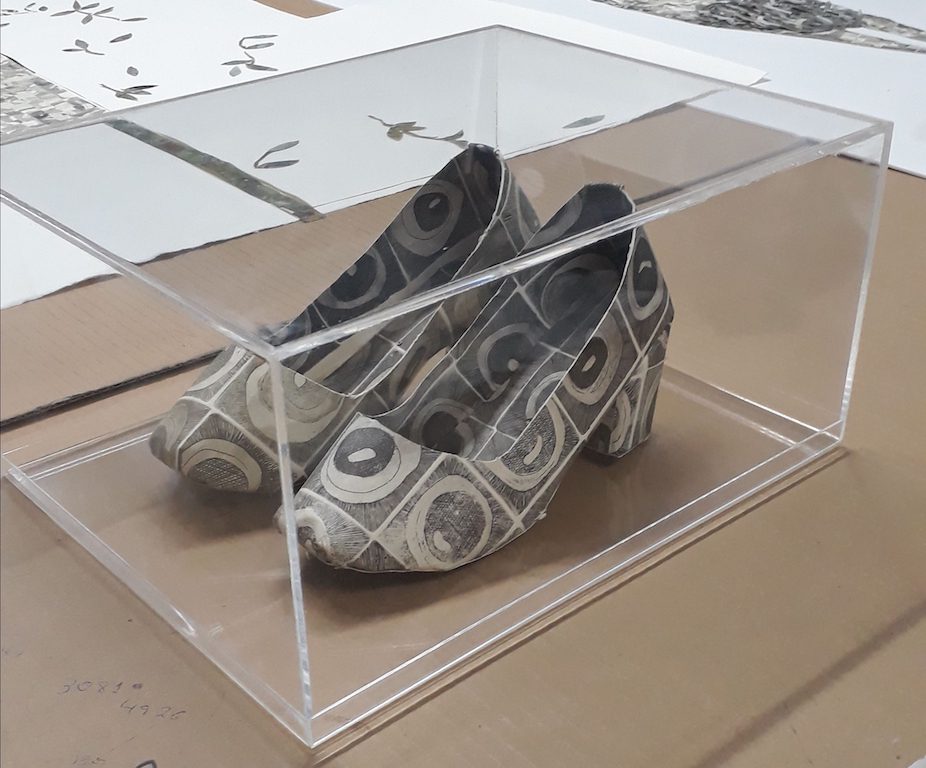 Composed of nine works, the exhibition left clear Sanches’s obsession with one theme: bull’s eyes. This theme is inspired by the ebó – a ritual performance based on a religious recipe that can include various ingredients. Concerning the bull’s eyes, the objective is to stave off any envy which, in Brazil, is known as the “evil eye.” The choice of metal etchings allows the artist to multiply the eyes that impressed her so much the first time she saw them: first buying them, then for their use in the ebó.

In this sense, the etching is not a mere copy of the image of the bull’s eye; rather, it functions as a slicing of time so that the relationship between the whole and its parts emerges. On the gallery’s ground floor, the visitor begins their journey with the work Transe Iluminado (2012), in which a set of metallic structures rectangular in shape was installed in the stairwell that led to the continued exhibition on the upper level.

This piece composed of geometrical volumes of stainless steel is partially covered by dozens of small etchings containing images of the bull’s eyes printed in blue, gray, black and green tones. On the upper level, among other works, the fine art print Cogito/contemplo/medito (2017) is exhibited, in which the bull’s eyes are at once inside and outside of the three heads. This functioning at once of being inside and outside suggests a state of non-differentiation between thinking, seeing and meditating.

The same occurs with the multiplication of the form of the bull’s eye in the work Transe Wearable (2007), in which a pair of paper shoes is exhibited in an acrylic box. Produced from fragile material and protected by the transparent box, it not only can be seen, but it’s as if it were looking at the spectator since it is printed with the theme of the bull’s eyes. 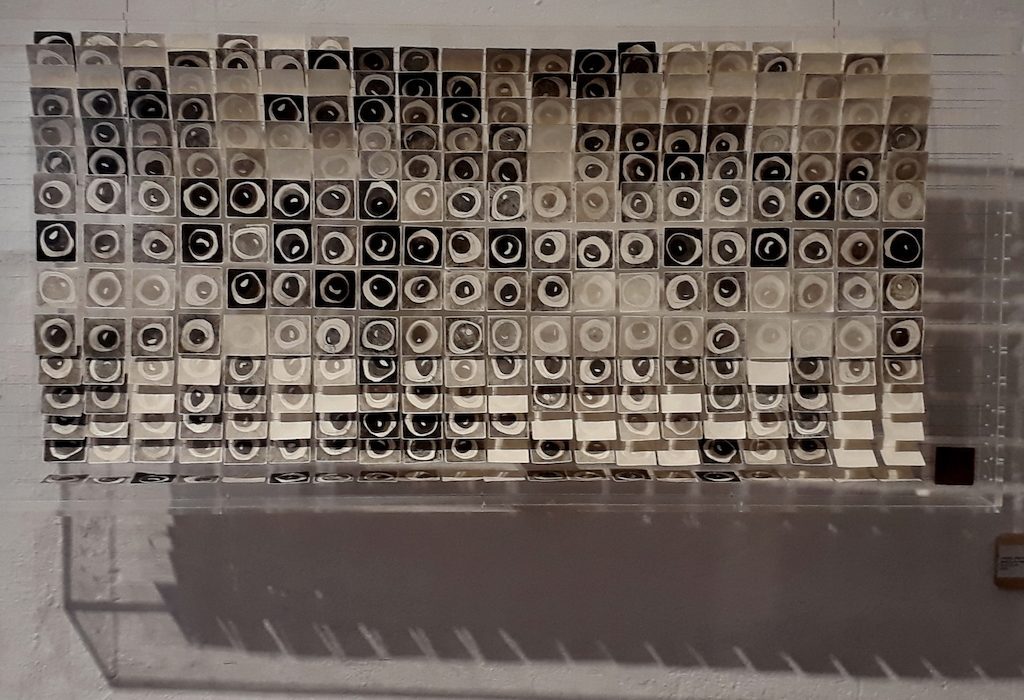 With a degree in Architecture from the Federal University of Bahia (UFBA), Sanches was initially trained between the ages of 6 and 14 at the Escolinha de Arte da Bahia. Her return to the visual arts was inspired by her interest in the tools for working with brass and copper for religious purposes when she was apprentice to the Bahian master toolmaker Gilmar Conceição. Starting in 1992, she began exhibiting these objects in the artistic circuit in and outside of Brazil.

In 1997, as an auditor in the Master’s program at UFBA and, subsequently, through workshops at MAM Bahia, Sanches would bring these different forms of constructive thought together. The combination of architecture, the tools of the orisha and the metal etchings is what has allowed her to make works like those exhibited in Transe, deslocamento de dimensões. In this regard, something she says is suggestive of the way she manipulates references and concepts without separating them in her artistic expression: “We are, at times, one thing in each place, but this does not indicate any type of schizophrenia.”