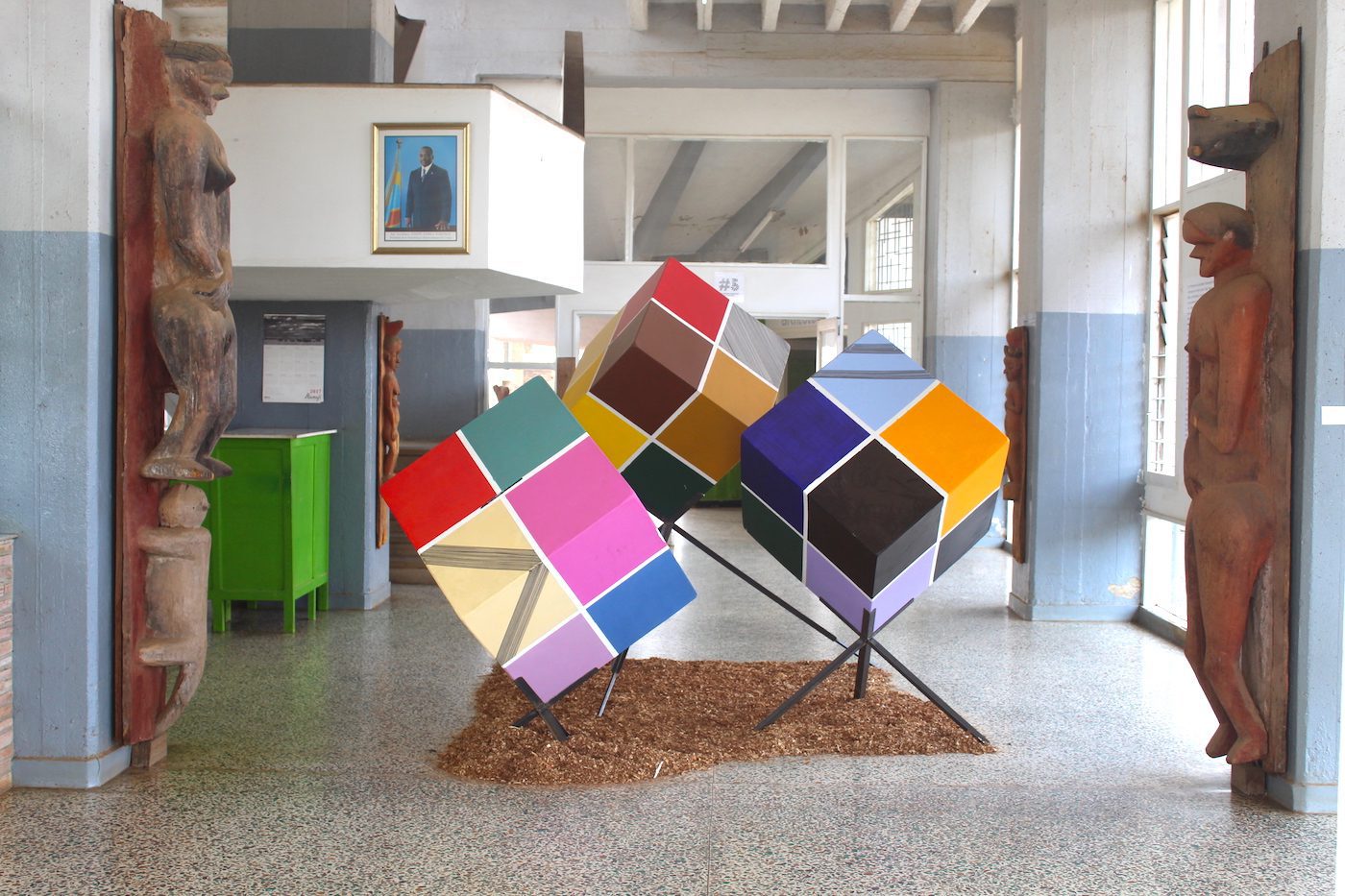 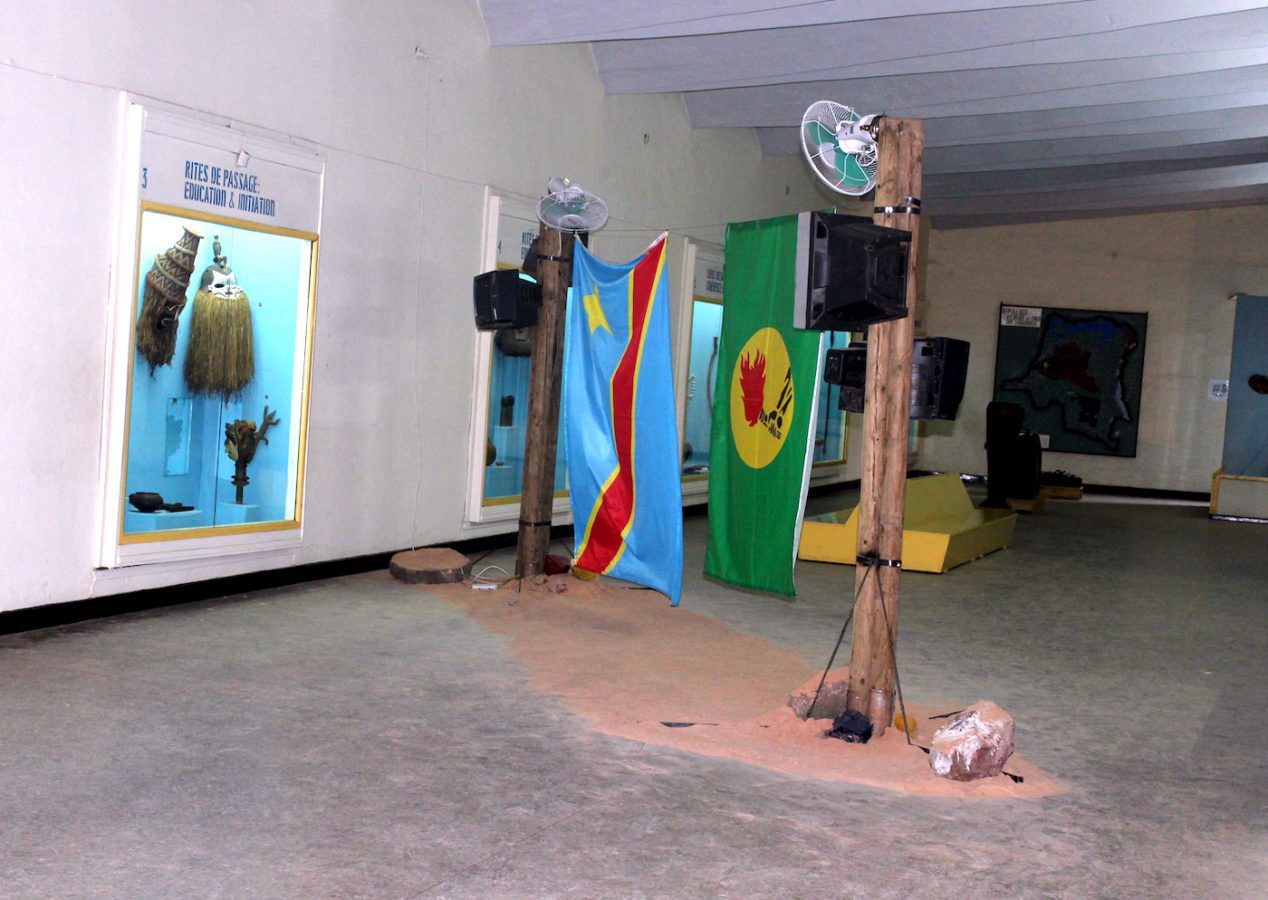 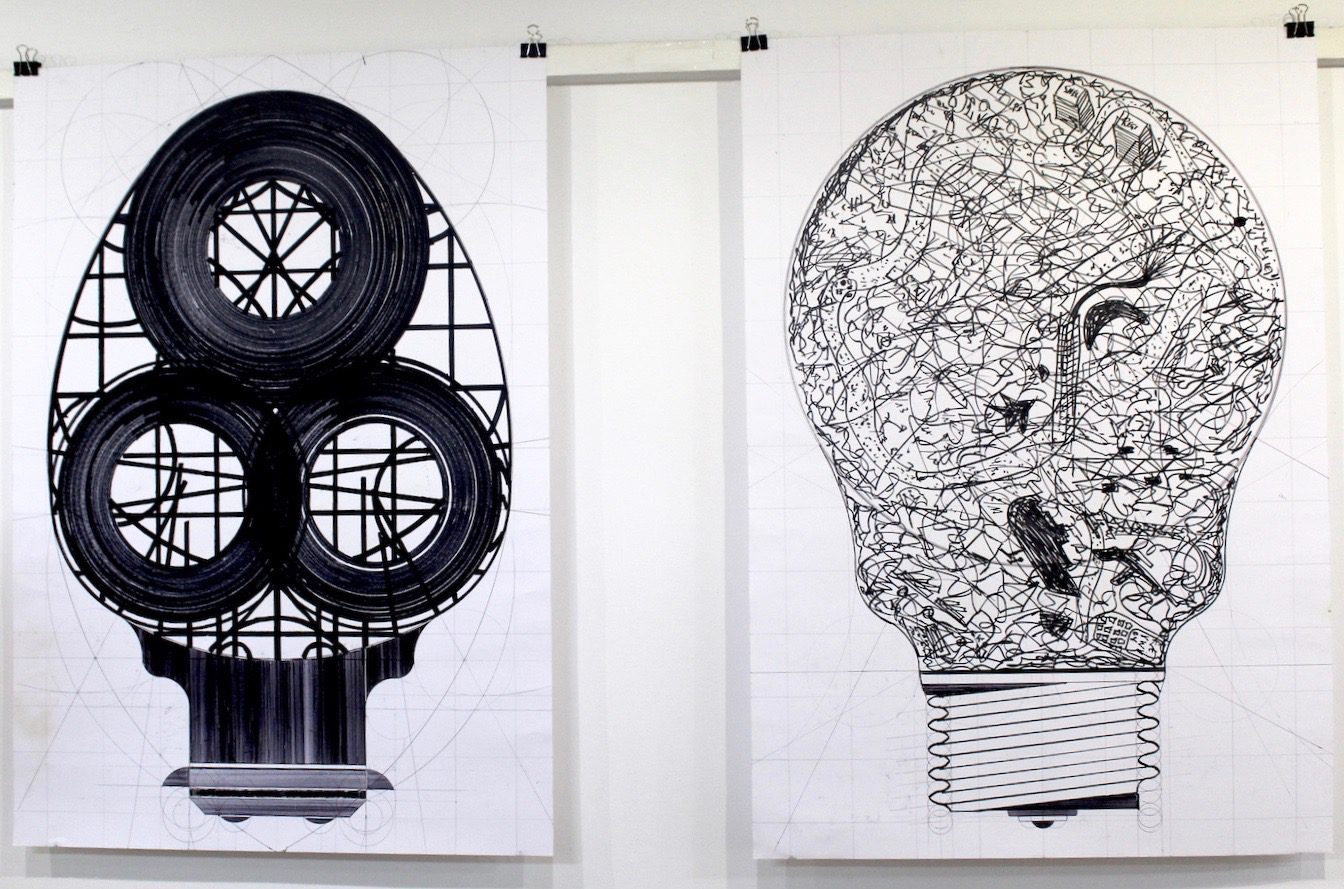 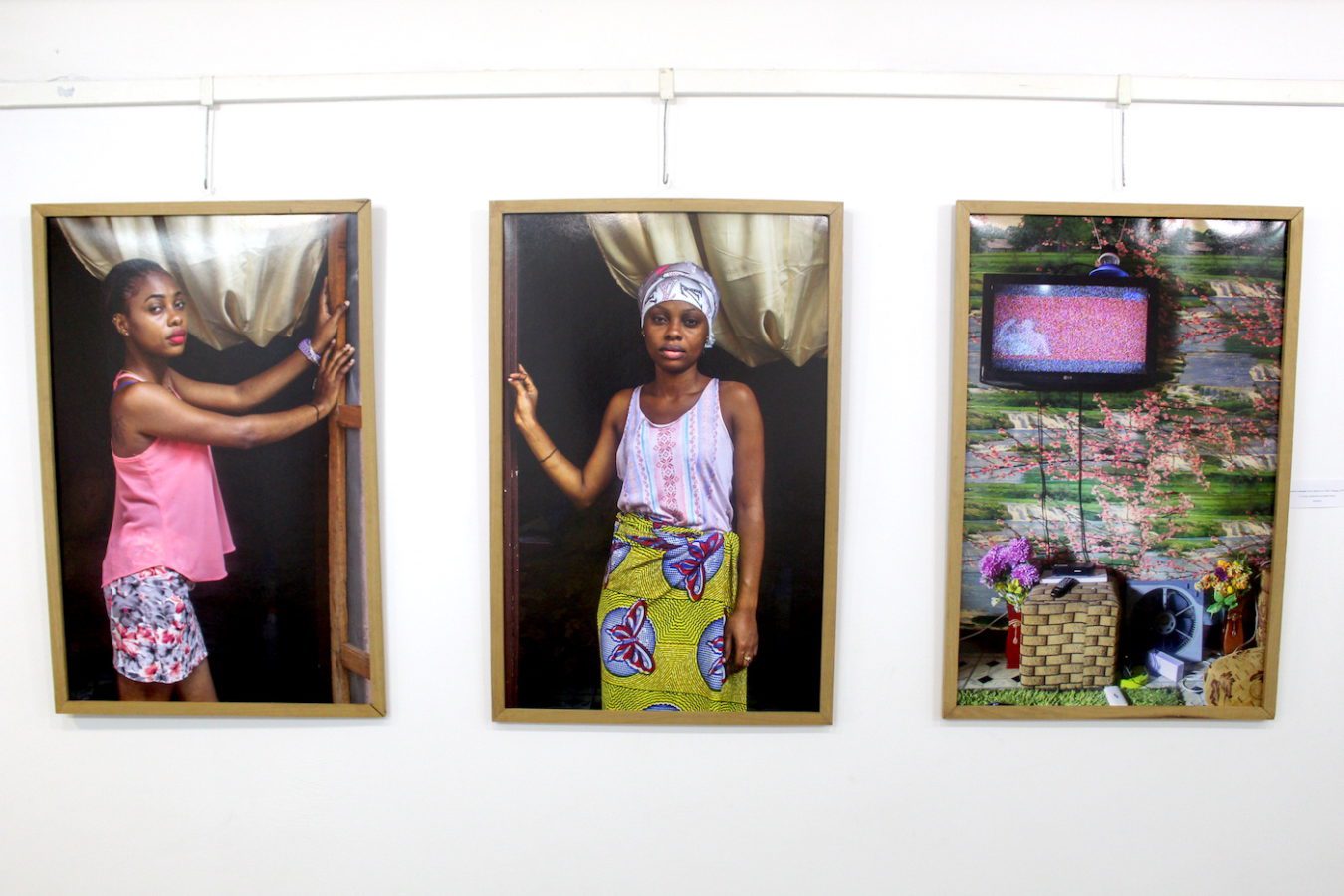 The fifth edition of the Lubumbashi Biennale runs from October 7 to November 12, 2017, in the southeastern part of the Democratic Republic of the Congo. According to commissioner Toma Luntumbue, who has been brought in for the second time running as artistic director, the biennale does not wish to be seen as an “imported event, intended primarily or implicitly as a showcase for foreign artists.” This decision has not gone uncriticized.

The National Museum of Lubumbashi, which is hosting the “International” exhibition, has been the main venue for this biennale. In this exhibition, some of the “stars” of contemporary art such as Carsten Höller, Jean-Pierre Bekolo, Pascale Marthine Tayou, and Tracey Rose are positioned alongside Congolese artists—such as Sammy Baloji, Jean Katambayi Mukendi, and Maurice Mbikayi—whose reputation is already established or is in the process of becoming established.

Along with the Halle de l’Étoile, the French Institute of Lubumbashi, and the Hangar Picha at the extremely upmarket Complexe La Plage, the National Museum has hosted the works on which the most care seems to have been lavished in organizational terms. Meanwhile, the Institute of Fine Arts and the new Atelier Picha have presented emerging artists, who were not part of the advertised list and did not receive broad media coverage, but whose number includes some wonderful surprises. This hierarchization between known artists with an international reputation and the young generation might cast doubt on the commissioner’s intention to “democratize the visibility” of local artists, given that the dichotomy between Congolese artists and artists from abroad is shifting and being re-categorized as a distinction between established and emerging artists.

It should nonetheless be stressed that this biennale is undeniably Congolese and includes a selection of artists with a particular connection to the country and works that address issues relating to the Congo. This is an approach that seems to have been taken on board by the Congolese-born Belgian commissioner, for whom this represents a form of “homecoming.” Carsten Höller—who exhibited a video installation at the 2015 Venice Biennale entitled Fara Fara about the live duels between performing musicians in Kinshasa—presented Upside-Down Goggled, 1994, a sort of virtual reality mask where you see the world upside down: exhibition goers were deeply impressed by it on opening day. The series Déjà vu by Zemba Luzamba, a Congolese painter living in South Africa, occupies the entire exhibition hall at the Halle de l’Etoile, while a “homage to the cinema of Kiripi Katembo Siku,” a Congolese video maker and photographer who died suddenly in 2015, shows audiences projections of his films in various locations around the city. The film Lobi Kuna (avant-hier/après-demain) by Matthias De Groof, which had its world premiere at Cercle Makutano on October 10, demonstrates the director’s concern with raising international awareness, among both intellectuals and artists, about the works of art from African Perspectives housed at the Royal Museum for Central Africa in Tervuren. Indeed, one person in the film calls the museum a “second cemetery for Congolese artists.” The Cameroonian director Jean-Pierre Bekolo presents the documentary film Les choses et les mots de Mudimbe, which is shown as a loop at the National Museum. It is a portrait of V. Y. Mudimbe, a Congolese philosopher and naturalized American who is nevertheless still considered the foremost African thinker, even if his book The Invention of Africa is relatively unknown in Lubumbashi, where he lived and taught for many years, because it has never been translated from English into French. In the film, Mudimbe develops a critique that is of crucial importance for Africa relating to the question “What does it mean to read African literature?”

In place of an exhibition, the refurbished museum library is showing an installation made of fragments of computers, found telephones, clothing, knitting yarn, and fiberglass that Maurice Mbikayi calls Information Control (2017), alongside felt-pen drawings on 70 x 100 cm paper by Jean Katambayi Mukendi entitled Afrolampe (2017). Copying Stereotypes (2017), consisting of photographs and drawings by German photographer Simon Menner, is on show in the contemporary art gallery, while his series Hugs (2017) is displayed on the wall of the space between the entomology and games sections. Vincent Mauger’s drawing Nulle part, c’est déja ailleurs, which is printed on 3 x 4 m tarpaulin, can be seen on a wall next to the stairs leading to the ethnography section, where there are two photographs hanging, 100 x 100 cm laser prints from the series Still a Stranger (2017) by the Kenyan Sarah Waiswa, which shows poetic portraits of albinos. The rising star of Kinshasan photography Gosette Lubondo offers us a triptych from her series Tala Ngai (Look at me), in which she photographs all the different sides of a young girl in Kinshasa, where the girls’ creed is komisala—“knowing how to make yourself beautiful.”

The work Congo Beach TV (2017), a mixed media installation by Pascale Marthine Tayou is on show in the ethnography section, where it enters into dialogue with the objects on permanent display there; the photos in the series Molili mabe (Darkness is evil, 2017) by Cédrick Nzolo, showing “Kinshasa in its dark hours,” are hung on the wall of one of the corridors of the museum. The chairs made from the trunks of dead trees and animal skins—the work of Rabulzi Nkier Nyombo, a young sculptor from Lubumbashi—enthralled the public, who all wanted to take selfies with the objects. Equally successful was the installation Fleurs d’ordures, based on plastic bottles collected by Eddy Masumbuku, who lives by an intersection at the Complexe La Plage.

It should be noted that certain films and sound installations are not open to the public every day, either because of electricity shortages or for technical reasons. However, several of them are worth going out of your way to see, such as O Seculo (The century, 2011) by Cinthia Marcelle and Tiago Mata Machado, and Die Wit Man (2015) by Tracey Rose, installed in the archaeology section; the work by Sammy Baloji in the ethnography section; the video Ba Sekwi, le retour des pionniers (2017) by Junior Kannah installed in the games section; and Fire Works (2014) by Apitchatpong Weerasethakul, which can be seen in the projection room. This raises the question of the logistical constraints facing video and sound installations within the context of a biennale staged in a city where the supply of electricity continues to be problematic—compounding the difficulty of finding information about the artists and their works on the different exhibition sites.

It should also be remembered that although it has been possible by and large to stage all the exhibitions as planned, the work of the video maker and photographer Gulda El Magambo was not shown in the end. In my interview with Sorana Munsya, the assistant commissioner, I also mentioned that the Swiss artist Aurélien Gamboni will exhibit his work at a later date for “personal reasons.”

The exhibitions room at the Institute of Fine Arts in Lubumbashi only hosted the pictures by Mastaki, photos by Jean Kiat, and the installation by Seraphine Mbey, all teachers at this institution. The Atelier Picha/Centre d’art et de recherche, which housed works by young artists like Franck Moka, Pamela Tulizo, and Nelson Makengo, seems to have made a strong impact, even if it did not benefit from the same visibility as the international exhibition at the National Museum in Lubumbashi. As proof of the quality of this generation, the list of artists selected for the next Dak’Art Biennale includes Géraldine Tobe, a Kinshasa painter who took part in the workshops.

In the wake of previous editions of the Lubumbashi biennale, which have taken as their theme “Beyond the Walls”—under the aegis of Simon Njami, who made the event part of a “Pan-African” logic, while bringing together Congolese artists like Kiripi Katembo Siku and Georges Senga—and “Enthusiasm” by Elvira Dyangani Ose, who confirmed the international stature of this biennale, the geographical “re-centering” that Luntumbue wanted to achieve in this edition makes sense because it allows for both appropriation and anchorage. But it could also be a trap in the face of the expectations cherished by artists from Congo and the Congolese diaspora, which are difficult to satisfy in a format of this kind. On the artistic level, it is tempting to debate the question of whether the thematic coherence of the selected works might not have gained the upper hand over the aesthetic choices in this biennale.

Costa Tshinzam is a writer, blogger, and author who is a member of the Habari RDC community. He took part in the C& critical writing workshop in Lubumbashi, where he lives and works.