Looking to vintage photographs and alternative processes, the Angolan Portuguese artist engages the infinite possibilities of an image.

“It’s as though I really knew these people and photographed them all myself,” the artist Délio Jasse said earlier this year, referring to the images from his series The Lost Chapter, Nampula, 1963 (2016). Featured in Aperture’s summer 2017 issue, “Platform Africa,” Jasse’s screenprints combine 1960s-era documents, letters, and photographs that he found in a flea market in Lisbon. They depict the blithe lifestyle of a Portuguese family living in Nampula, a province in Mozambique, which at the time was still a Portuguese colony. Jasse, who was born in Luanda, Angola—another former Portuguese colony—has often used analog and historic photographic processes, such as the cyanotype, to reflect the mingling of past and present in postcolonial African culture and politics.

In the images from The Lost Chapter, the anonymous figures in family snapshots become symbolic stewards of Portuguese privilege: colonists enjoy the tropical lifestyle, but black servants are relegated to the margins. Jasse intervened further by overlaying the images with stamps and visas. “More than abstract stories, however, Jasse seems to have found that there is violence in documents,” Silas Martí wrote in his introduction to Jasse’s Aperture portfolio. “Jasse makes this clear by subverting these photographs rescued from oblivion—images of nonchalant innocence are overshadowed by the fluorescent weight of authority.” Here, Jasse speaks with Paula Nascimento about archives, citizenship, and the afterimage of Portuguese colonialism in Africa. 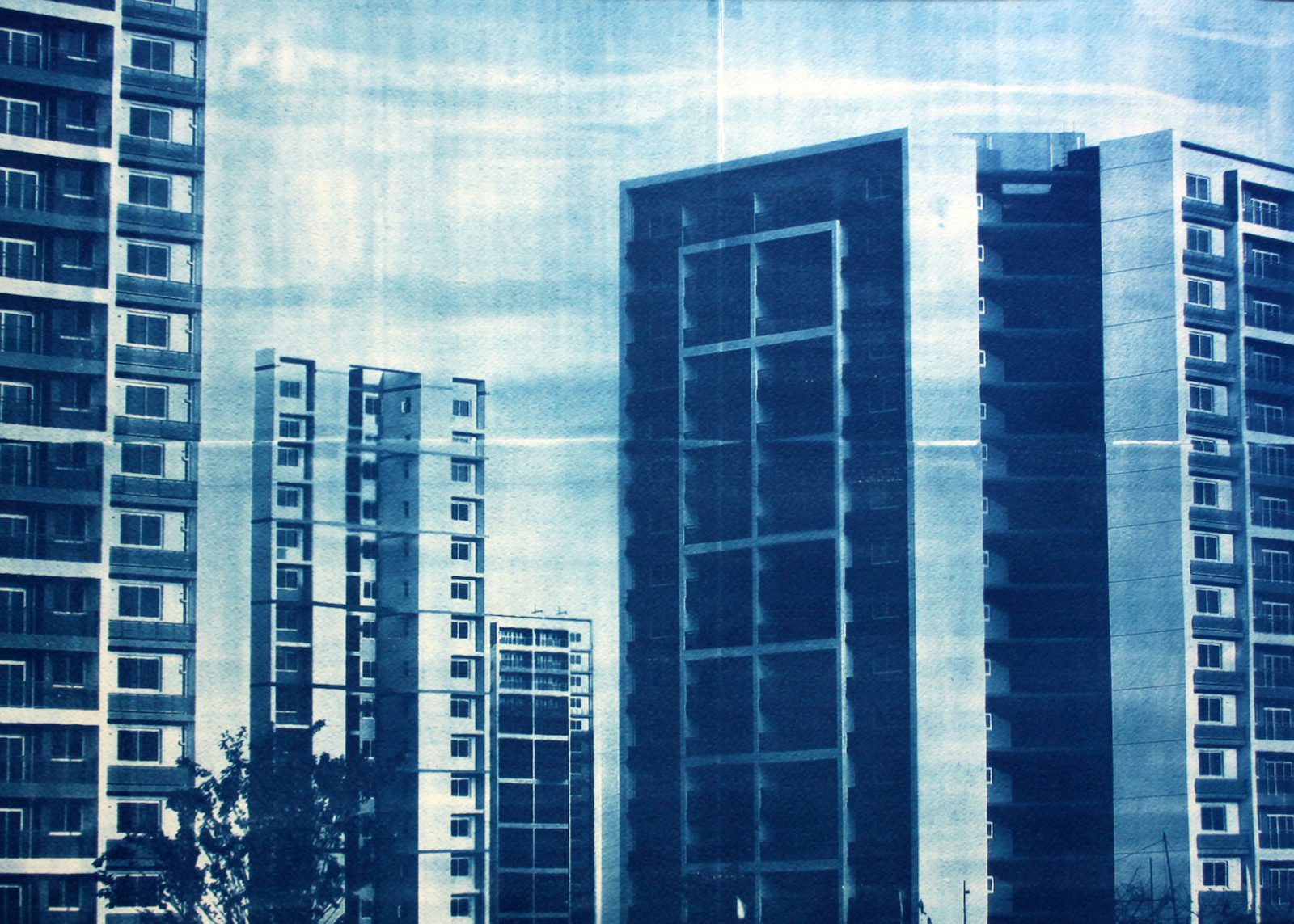 Paula Nascimento: Your work is an exploration of themes of memory and identity within a context that is postcolonial by default. By interweaving disparate sources, you draw links between photography, memory, and place.

Délio Jasse: Yes, these have been key themes in my work. I like to explore the connection between photography and memory by working with archives. The issue of memory is also linked to that of photography as an expressive medium.

PN: What kind of archives do you work with?

DJ: I work both with found archives (usually I am drawn to family archives) and my own archives, the images that I shoot in Luanda and around the world.  In my studio, I have many images—new, old, found, shot, etc.—which are waiting to be processed. I would say that the archive as a concept, and how I work with archives by changing them and showing their contradictions, is quite central in my work.

PN: What comes first to you, the image of a project or the concept of a series?

DJ: The image comes first, then the concept. It is the image that finds me, but, at the same time, I often work with the same themes, so it is easy to develop the conceptual framework of a project. 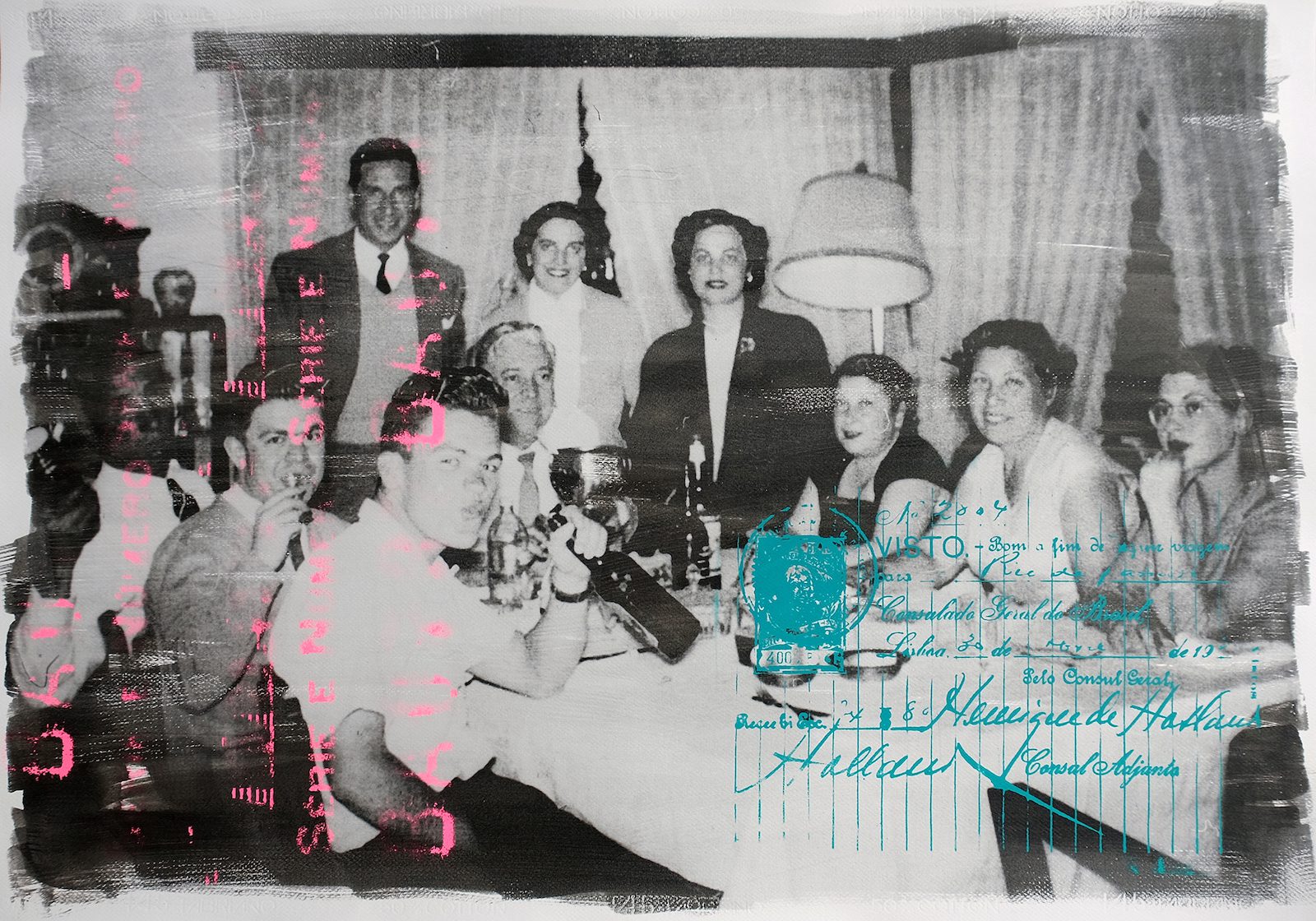 PN: Some time ago, when we were talking about the role of memory in your practice, you highlighted that the most important aspect is how one decides to speak about the past. It’s about the position and the gaze. How do you start your research and approach the archives you work with?

DJ: Well, photography isn’t objective, and the photographer’s gaze is more important than the photographed object. In my case, memory arises in the encounter between the past and the future, which isn’t always harmonious. Given that the gaze is always fragmented, rather than objective, the object—whether the past or a specific event—becomes fragile and ephemeral.

It takes me some time to create an archive of images, or as I say, a body of work of images that relate to one another. When I find some images or when I take new pictures, I let them rest for a while until I am naturally drawn to a specific image or detail. This then becomes the starting point for a new series, and from there, I start to experiment, and to decide which techniques to use.

The Nampula archive, for example, I found at Feira da Ladra, a flea market in Lisbon. At first, I was struck by the picture where you see some ladies in a car. That car reminded me of a certain type of wealth and a specific period in time. Only when I turned the paper over did I realize that the image was taken in Mozambique in 1963  . The contrast between the image itself and the place in which it was taken was what interested me in this case. 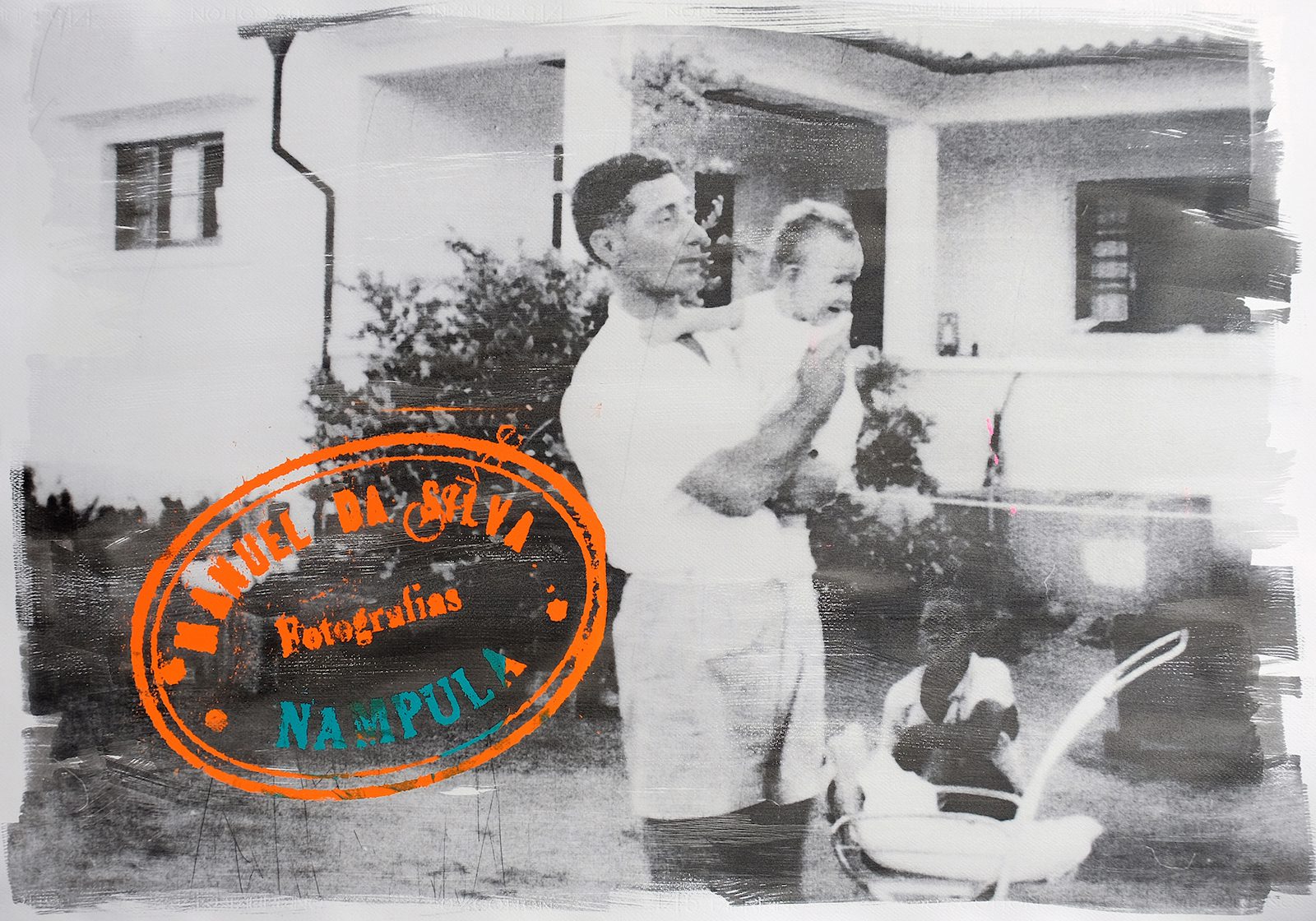 PN: What do you mean by contrast? The alienation of the white settlers against the political context of the struggles for independence in Mozambique as suggested by the absence of black Mozambicans from the images?

DJ: These images could have been taken anywhere in the Western world. They are in Africa, but there is nothing that indicates the location. Not only are there no geographical or physical signs, but there are also very few black people. And the few black people (clearly servants) are all almost hidden; it is not easy to see them. That is the contrast I was talking about: how their lives looked (totally European) versus where they were (in Mozambique). Thinking about it, I understand that the term “contrast” may be a bit ambiguous here, and maybe I should have referred to it as a “deletion” of Africa and black Africans. 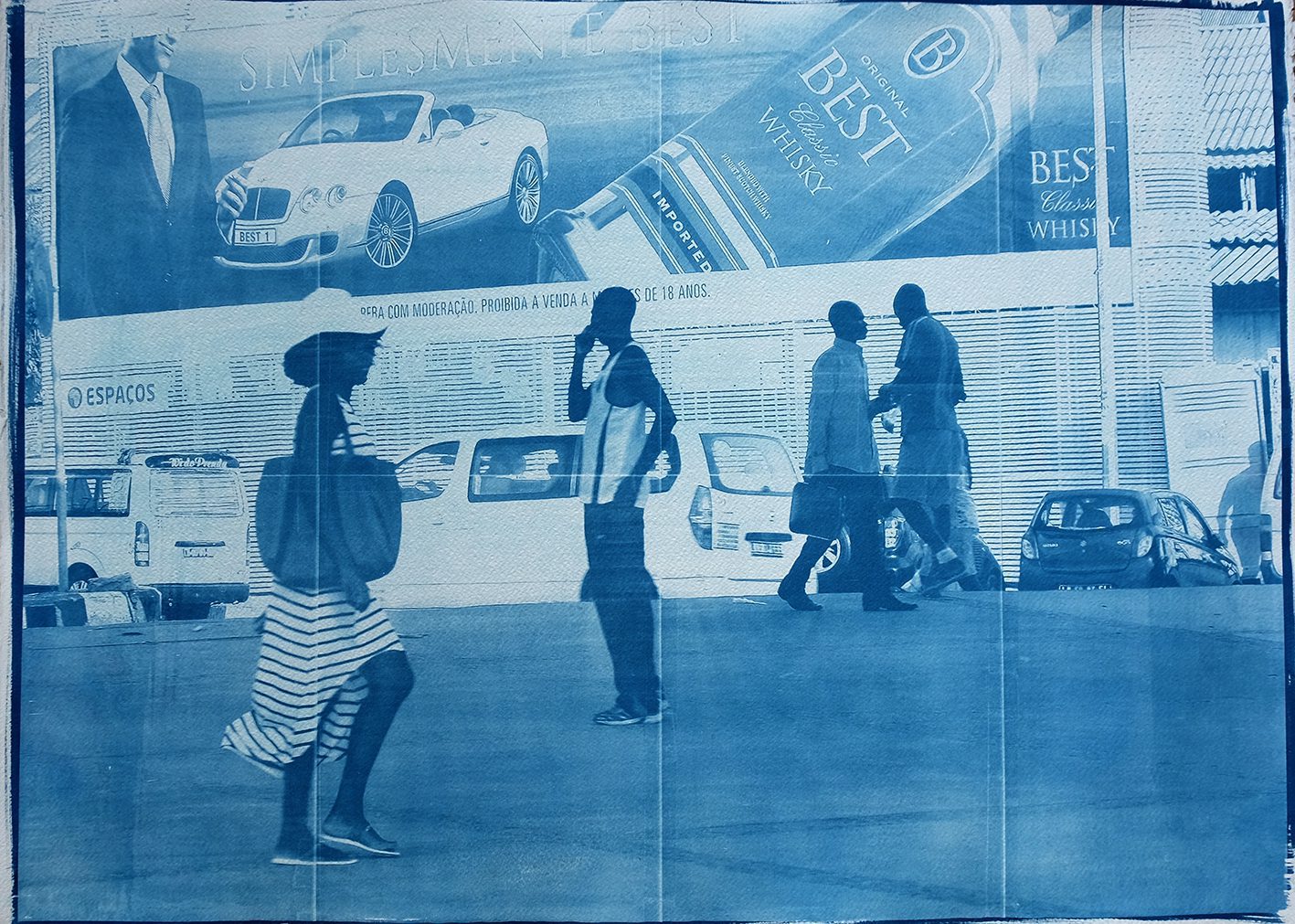 PN: Let’s go back a little bit. You are part of a generation that left Angola young and moved to Portugal at a specific moment in time, around the early ’90s. How was your experience as an immigrant, and did this influence your thematic interests?

DJ: I moved to Lisbon when I was eighteen years old. In the first years, I had all my papers, but, at a certain point, I had no work contract and I lost my legal residency. As my father has Portuguese citizenship (my great grandfather was from Northern Portugal), I then applied to become a Portuguese citizen. The process was a bit crazy. My birth certificate got lost in Luanda, Angola, and the government had to make a new one. There were always bureaucratic problems that seemed impossible to resolve. It was a grotesque situation. My brothers got their Portuguese documents very quickly but, for me, it seemed like a problem with no solution. And then, suddenly, in 2010, I got a letter saying, “Hey! You are finally Portuguese!” I still don’t know which documents or information worked. 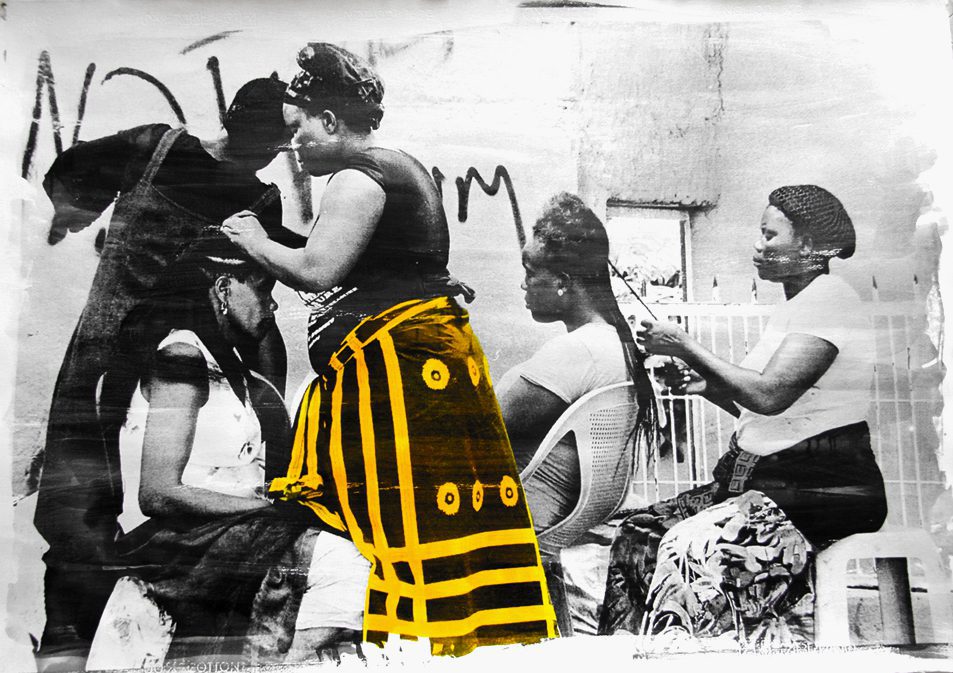 PN: Clearly this narrative explains how you expose the obscurity and ambiguity of these immigration processes. Are you interested in the characters’ own stories in the images you find and collect, or only in fictionalizing and creating other signifiers?

DJ: Both—it depends if I work with found materials or with my own images. With the found archives, I am more interested in creating new narratives; with my own images, I try to question the official version of the sources. For example, in the series Pontus (2012), you can’t say where the images were taken. I like to make a decoy for the viewer.

In most of my work, I assume the non-reality of the final images and highlight the process that created them: the manipulation or superimposition of images, whether my own or found material. The constructed images belong to space that is neither completely real nor completely fictitious, neither reality nor memory. 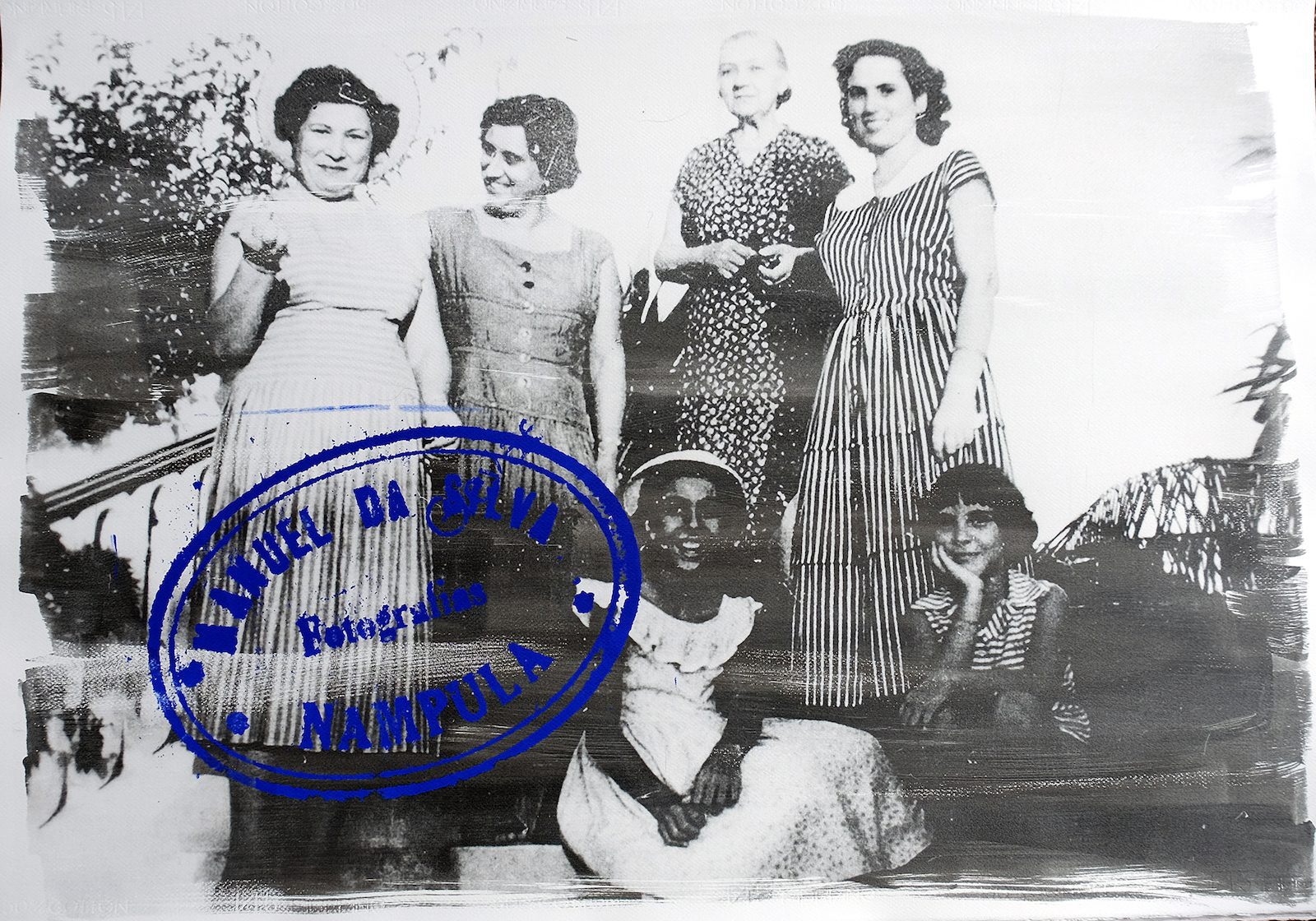 PN: These processes that you go through to construct the images are fascinating. How did you interest in photography start?

DJ: I fell in love with photography after working in a screen-printing atelier. I worked at the atelier run by my uncle, in Lisbon, from 2003 until 2007. There was a photography studio within the atelier, which we used to separate the colors to create photolithographs. I developed my interest in photography from that experience.

PN: Would that explain your preference for the techniques and methods you use to construct your images?

DJ: The only element I retained from silk screen printing in my work is the use of different layers to construct the final image. Most of the time, I work with analog photography—sometimes I use digital images as a tool—and I also create my own emulsions.

Once, I had to create my own camera. The first time I returned to Luanda after a long period away, I wasn’t comfortable taking my camera around town. It was a simple box, made of cardboard, with a hole in it.

PN: And what did you shoot with this camera? Have you used those images?

DJ: The camera worked but the images are quite peculiar: excessive exposure, with many nuances, and juxtapositions.  I really liked the resulting images. I would say they are more like experiences or tests than real images, but I really like them. They have a dreamy look.  But I haven’t worked with them yet. Who knows, maybe may next project. 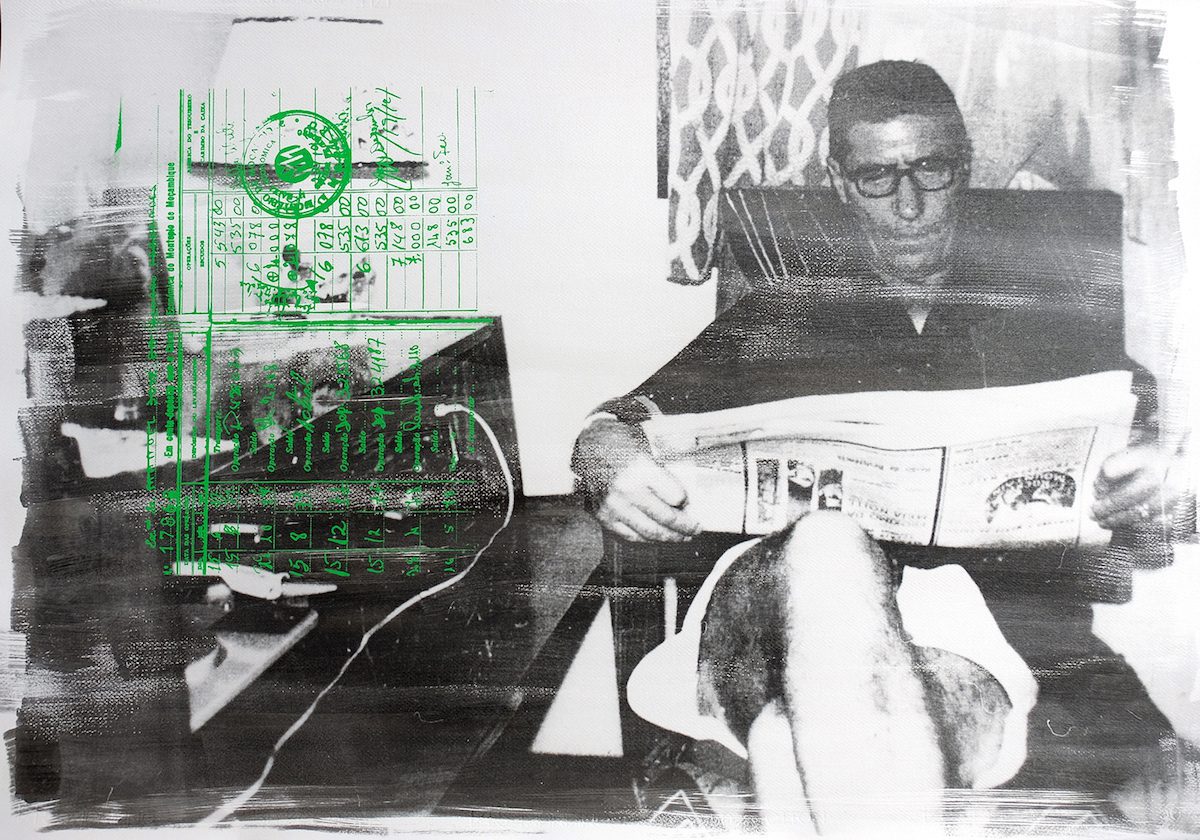 PN: Your lab must be a magical place. It is your creative space, where these processes come to live.

DJ: The photographic lab is essential for my work. It’s where I create most of my works—to be more precise, I would use the word construct, as you’ve suggested. When I recover an old image, I have to create a new negative. I don’t only photograph the image, but I also choose to make a collage, montage, et cetera. The technique I decide to use in the beginning of a new series is very important and it will define the overall project.

Most of the techniques I use in the lab are considered “alternative.” At the moment, I am working with cyanotype, a printing technique which was initially used by botanists to register plants. The images are created with sunlight, and there is no need to have a darkroom. But I have also used other, old techniques. The type of intervention I choose depends on the found images and their state of conservation.

The stamps and documents in Nampula, for example, are also a key point in my work, and are inserted using serigraphy or photography. But there is no connection between the documents and the individuals in the images. The idea is to show the nonsense of official documents. You are not who you are just because a document states it. 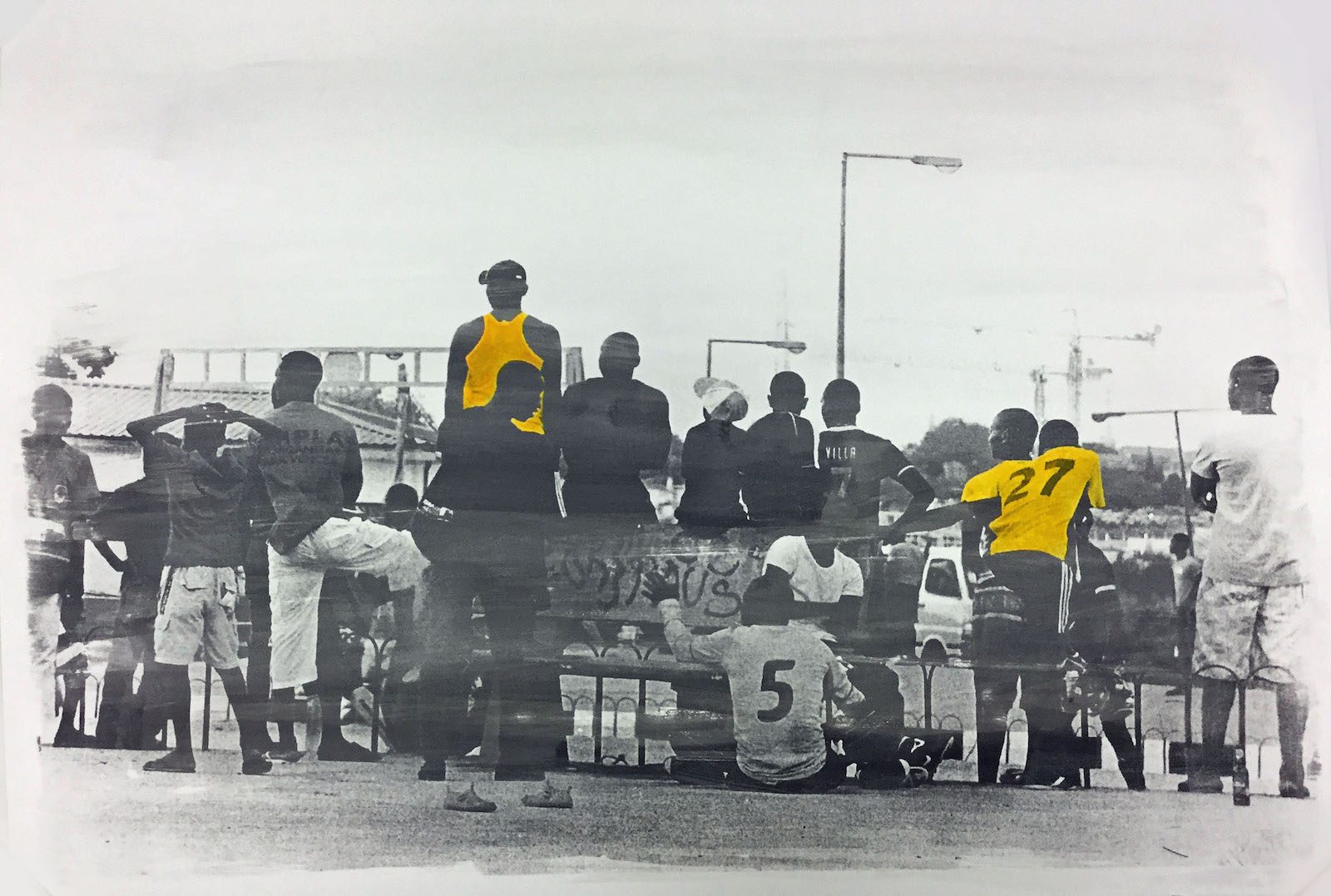 PN: It is a very complex process, both technically and perhaps also symbolically.

DJ: The methods I use have different levels of complexity depending on the expression and concept of the project.

As I merge the process and the end product, I am deconstructing the image making itself. So, yes, without these alternative processes, my work wouldn’t exist. Part of my interest is in exposing these alternative processes and in making the various stages “physical,” and therefore visible. The image ends up being neither univocal nor homogeneous; each layer can be viewed individually or jointly. I like to engage with the infinite possibilities that an image, or a life, has—or could have—and for me the best way to do this is to assume the process as a fundamental part of the work.

Paula Nascimento is an architect and curator from Luanda, Angola.