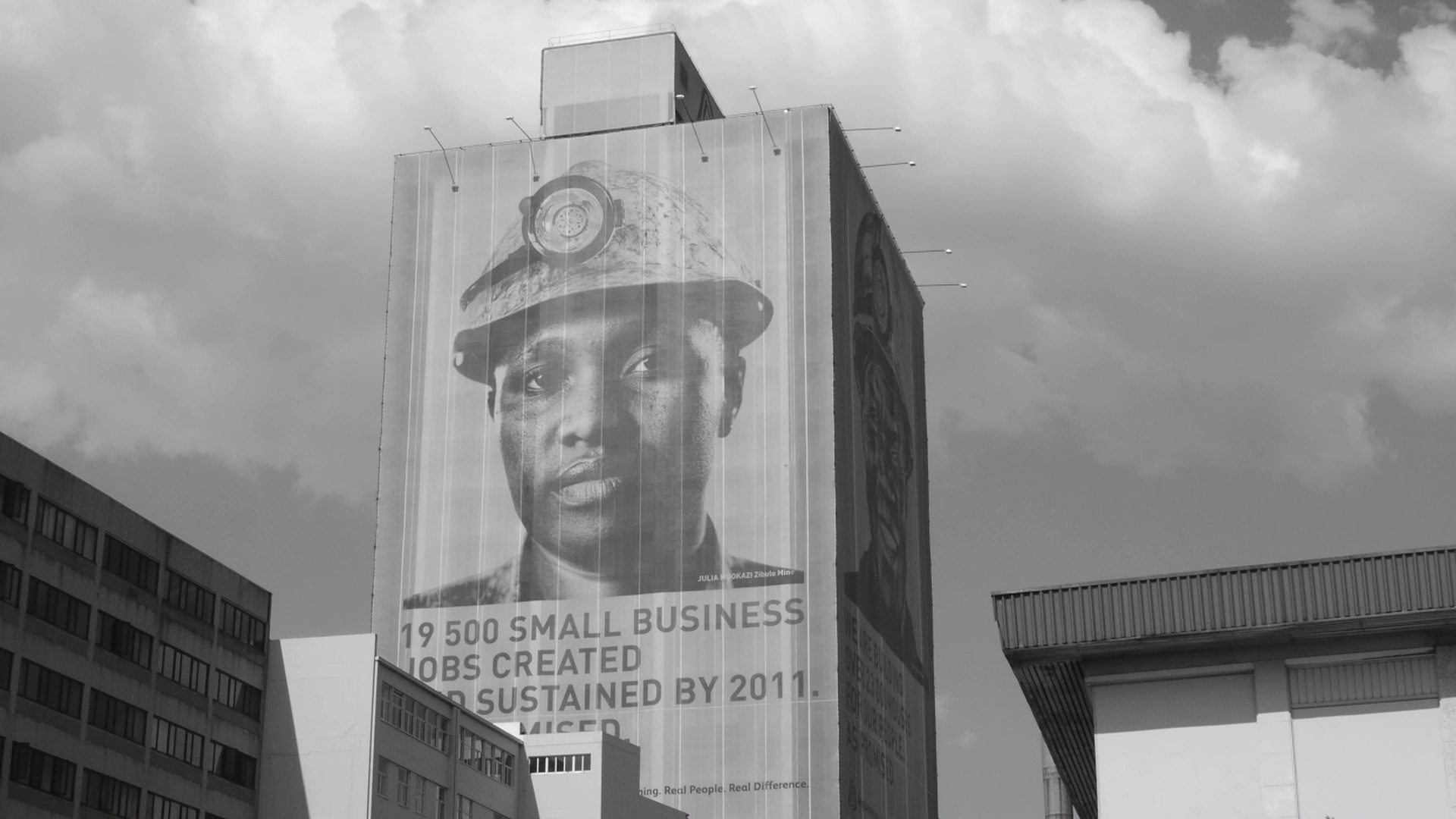 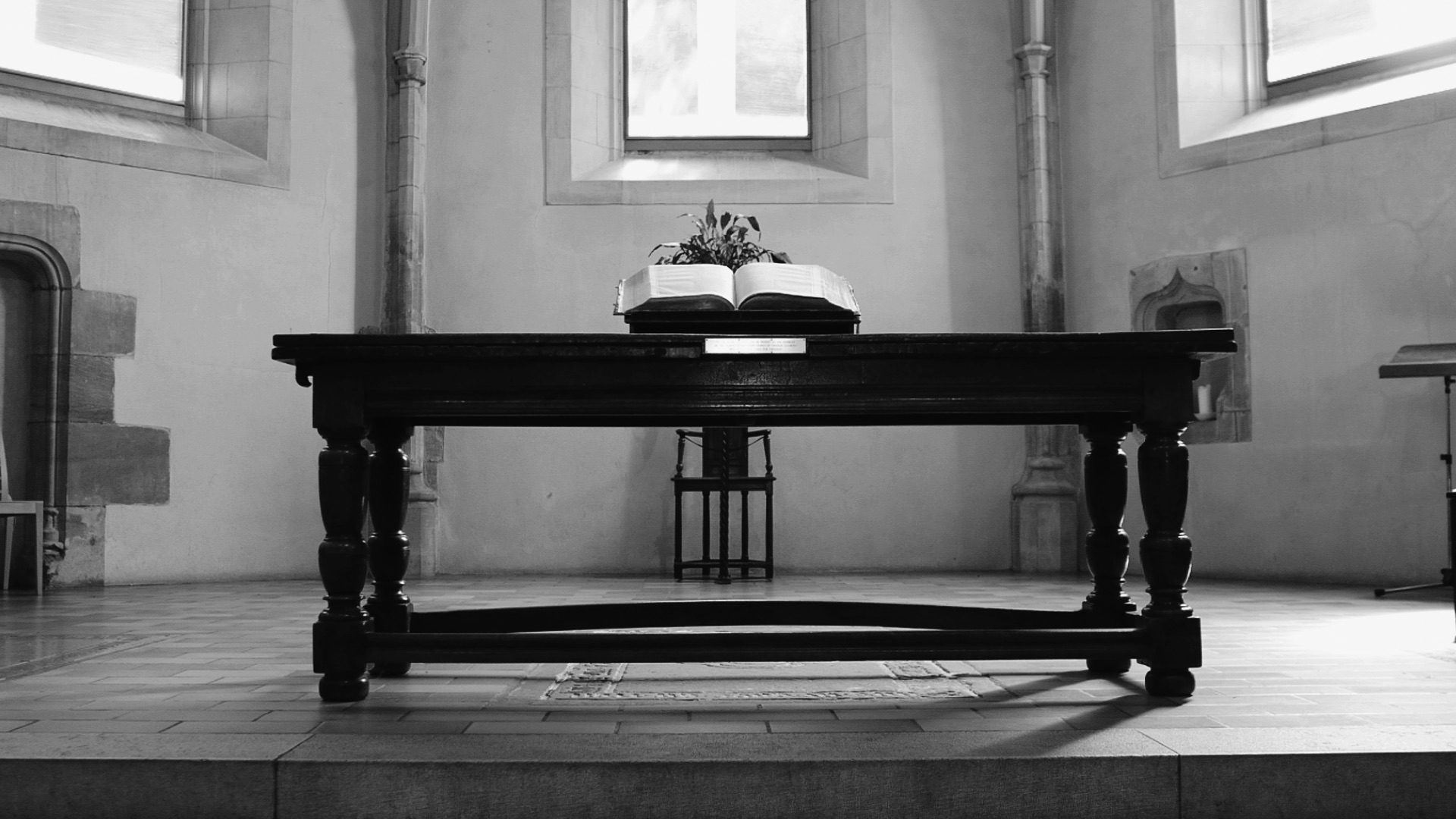 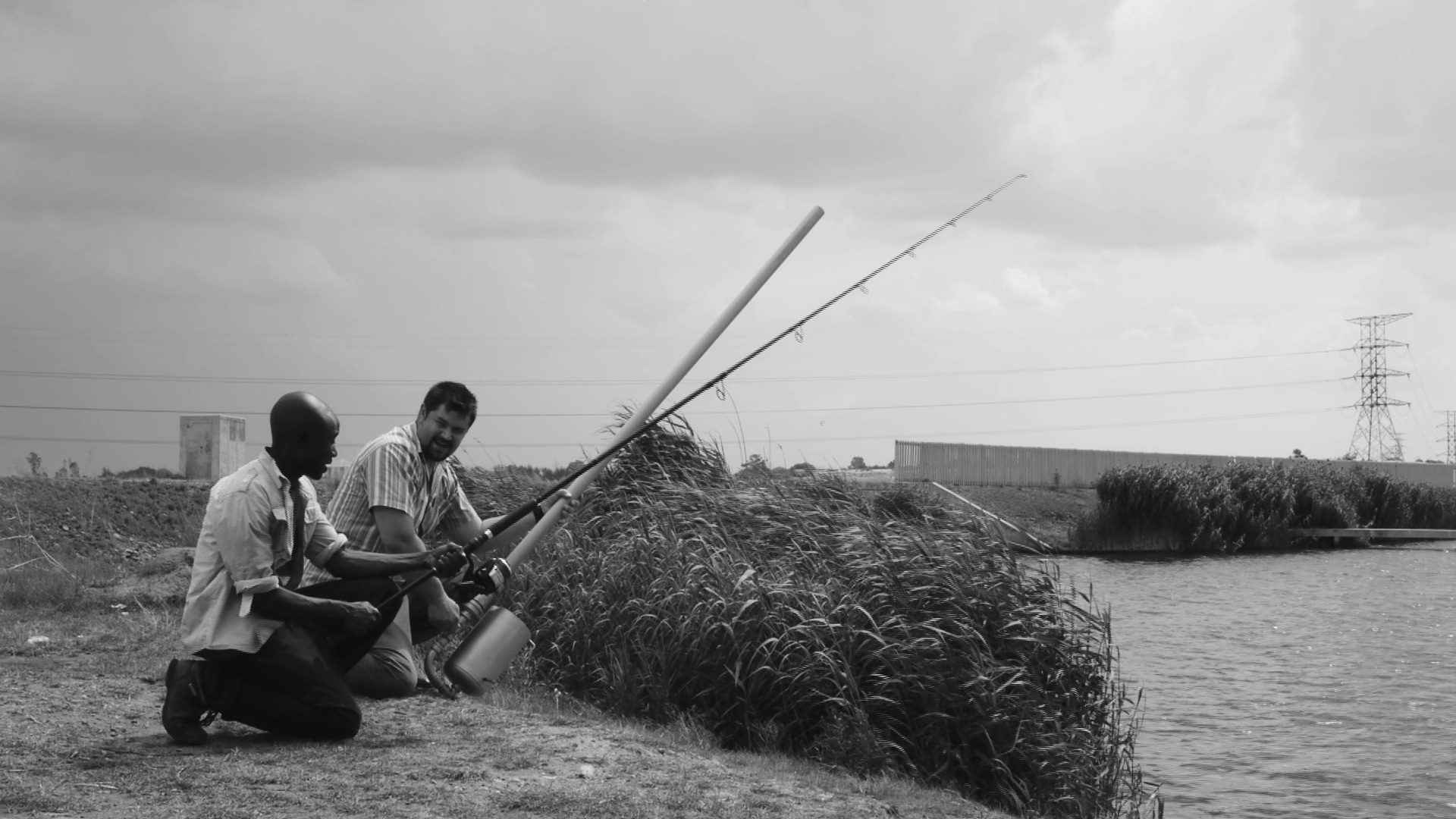 Simon Gush’s essay film, “Sunday Light” is an exploration of how images of labor have shaped the city of Johannesburg. Johannesburg is often styled by clichés typical in descriptions of African metropolises, which are spoken about as “vibrant and chaotic”. In reality, Johannesburg is indelibly stamped by the mandates of Calvinist doctrine, as well as its apartheid history. Post 1994, white business owners fled the city centre, fearing a Black uprising. Only banks remained, lured by a tax incentive. Now, although it is a center into which a million stream daily, in the evenings and on weekends it is eerily abandoned. On Sundays that stillness is even more accentuated.

Gush’s camera records a lone person crossing the street, and an empty minibus speeding away – its conductor uselessly whistling out his high-pitched call for customers. A fountain plays out its song to no one in particular. Interspersed with these city scenes are intertitles (a term used to refer to text-frames in silent films); these are Gush’s ruminations about the nature of work. “What do you do?” he notes, is almost always an inquiry about one’s labor, and how one fits into a nation’s economy. Then his camera focuses on a series of cats sunning themselves in the courtyard of a miner’s building, looking well-fed and rested. They are kept not out of affection, but to control the rat population. The cats are there to work, but they also take their mandatory hours of rest.

Gush became interested in labor and the ideologies surrounding work watching his father working as a labor lawyer in South Africa. The proximity to workers and ongoing conversations about strikes informed his own views, helping him understand South Africa, historically and in the present. The fear of being lazy is drilled into us through Calvinist doctrine but also through a colonial fear of indolence: Lest we be regarded as regressive or “native” by our “mother country.” In order to understand his own position on Protestant work ethics, he began to do research. Gush read Max Weber and even went on holiday to Geneva – the birthplace of Calvinism. “I thought it was funny to go on a holiday to do research on work,” he says. That research helped him see how decisions in Johannesburg’s fortress-like cathedrals of commerce had repercussions that meant life and death for those whose hard labor created the city’s wealth. As could be seen in the events of August 2012, when authorities were pressured to force the hand of striking miners at the Marikana platinum mines – which led to police opening fire, shooting down 112 men and killing 34.

Another film in this series, “Iseeyou”, records the ubiquitous monuments to miners in Johannesburg. It deals with the mining industry in general, and the more abstract idea of the discovery of minerals essential to industrialization. One can spot the monuments in roundabouts or outside buildings of the Mineworkers’ Association. Gush notes that for the seven years he was a resident of Johannesburg, he drove past them on his way to art classes without really seeing them. It was only when he returned after a two-year stint at the Hoger Instituut voor Schone Kunsten in Belgium, that he noticed their presence. The representations of male miners around the city are intended to provide visibility to the men on whose labor the whole of South Africa’s past and its future depends. In public representations they are always depicted in heroic stances, Gush notes. We are asked to “salute these heroes who risked their lives” to make Johannesburg an economic powerhouse, a position Gush critiques. In other monuments, the worker is absent; in his place are monumental equipment representing labor. Machinery is more powerful than the frail bodies of miners, who are susceptible to injury, illness, loneliness, alcoholism, and HIV; machinery never protests for higher wages, and never goes on strike, shaming those few who profit in the billions.

In “Lazy Nigel”, the essay film that will be shown at Dak’Art 2016, Gush problematizes the ways in which we valorize labor. He points out that even sleep has become an enormously profitable industry: “Beds, mattresses and pillows are constantly being pushed on us”, he says. Yet sleep is the opposite of the labor that we are goaded into doing; the desire to rest is, in fact, the enemy in this system, since it removes us from the “cycles of consumption and labor”. Gush notes that the slogan, “8 hours for work, 8 hours for sleep, 8 hours for what we will,” emerged around the late 1800s, as northern Europe was beginning its romance with industrialization. His work circles around this possibility: that there is something more than a simple binary between work and laziness. What one “wills” is an act, just as contemplation—in its stillness—is an act. “Lazy Nigel” ends with an example of this possibility: he meets Ruaan from Heidelberg who “works in pest control”; he has come to the dam nearby to test a “cannon” that can fire a fishing line with bait far out into the water. His contraption is made of a compressor and a plastic drainpipe; the bait is frozen in tubes of ice in order to provide some weight when he fires it off. With great enthusiasm Ruaan shows Gush and photographer Simon Fidelis (working on the sound for the film), how the device works. When a successful launch of fishing line is achieved, he rears up in delight, punching the air in a performance of joyousness and victory. There is undeniable pleasure in his activity, though it does not produce anything for the marketplace.

M. Neelika Jayawardane is Associate Professor of English at the State University of New York at Oswego, and an Honorary Research Associate at the Centre for Indian Studies in Africa (CISA), University of the Witwatersrand (South Africa). She is Culture and Arts Editor at Africa is a Country.