Solange Farkas was one of the guest curators of Dak’Art 2016. C& talked to her about Videobrasil Festival, Southern Panoramas, the visibility of Afro-Brazilian artists and the importance of Dak’Art in the international art scene.

Contemporary And (C&): As a curator, you launched the Videobrasil Festival in 1983, just after the military dictatorship in Brazil ended. Tell us a bit more about how it all began and how it has evolved over the last three decades.

Solange Farkas: In Brazil, there are a few historical peculiarities in the relationship between moving images and the fine arts scene, and Videobrasil has played a key role in this trajectory in its 30 years of existence. Video first emerged as a medium in the 1960s, but only in the 1970s it was assimilated by Brazilian art production, in experimental works. During that same period, in the realm of film, the Brazilian movement known as Cinema Novo ushered in powerful new production parameters. Sporting the motto “An idea in mind, a camera in hand,” the movement, whose icon was the filmmaker Glauber Rocha, influenced a whole generation of new creators, highlighting the country’s reality and imagery, as well as political and social issues at the height of the military dictatorship. Within that context, the convergence between moving images – particularly video – and the fine arts was still rather tentative. The Videobrasil Festival emerged in 1983, at a time when Brazil was in the iron grip of a military regime that restricted and controlled access and cultural manifestation, especially when it came to alternative forms of expression.

In its early stage, the festival had strong ties with the technological developments in video, which were beginning to come to fruition, even though they were initially restricted to TV channels and production companies. In that sense, we were the first and for a long time the only space in the country for the showcasing of video productions; a platform for encouraging production and diffusion of the work of young artists. Throughout the 1980s the festival presented videos influenced by documentary language and cinema, but it also made room for experimentation by including productions striving to innovate television aesthetics. These works touted anti-establishment discourses, setting out to interfere with production processes and to invade TV – which was the “face of the dictatorship,” as people used to say at the time.

In the 1990s, our second phase, electronic art became established in the national and international festival and exhibition scenes – even though video remained somewhat distant from the more traditional art systems, their galleries and museums. Formal and aesthetic experimentation intensified, as did the incorporation of new media into art works. In this second phase, the festival went international. The curatorial emphasis of the competitive show shifted towards the geopolitical South, comprising countries in Latin America, the Caribbean, Africa, the Middle East, Eastern Europe, South and Southeast Asia, and Oceania. During that same period, the festival’s competitive show was accompanied by other shows that were being held regularly, as well as exhibitions by internationally known artists such as Nam June Paik, Bill Viola and Giani Toti.

Starting in 2001, in what we consider the beginning of the festival’s third phase, we began investing in more open programming and curatorial modalities, mirroring a substantial shift in art scene dynamics. To that end, we established a closer dialogue with cinema and performance. The competitive show began attracting artists with established careers, a reflection of the presence of video on the scene; and we began incorporating regions such as Africa and the Middle East to a greater degree. The culmination of this trend was our definite inclusion of all contemporary art languages and disciplines in 2011.

With the 19th edition last year, we entered into a new phase by opening our own venue, Galpão VB. This space enables us to work on a more consistent level. Designed to house exhibitions, actions, reflection, meetings, and research, Galpão VB activates the video collection amassed throughout Videobrasil’s three decades of operation. That’s the whole idea of this space: to welcome and engage with the artists, curators and audiences all year round. During the 19th Videobrasil Festival, Galpão VB hosted the Southern Panoramas | Commissioned Projects exhibition, the other key development of the festival. For the first time we launched an open call for projects to be produced by the festival. Four young artists from Brazil, Colombia, Kenya, and Taiwan had their works commissioned.

Our main challenge was, and still is, our determination to change direction whenever necessary. Questioning ourselves and taking chances, pushing boundaries towards new themes, languages and mediums. 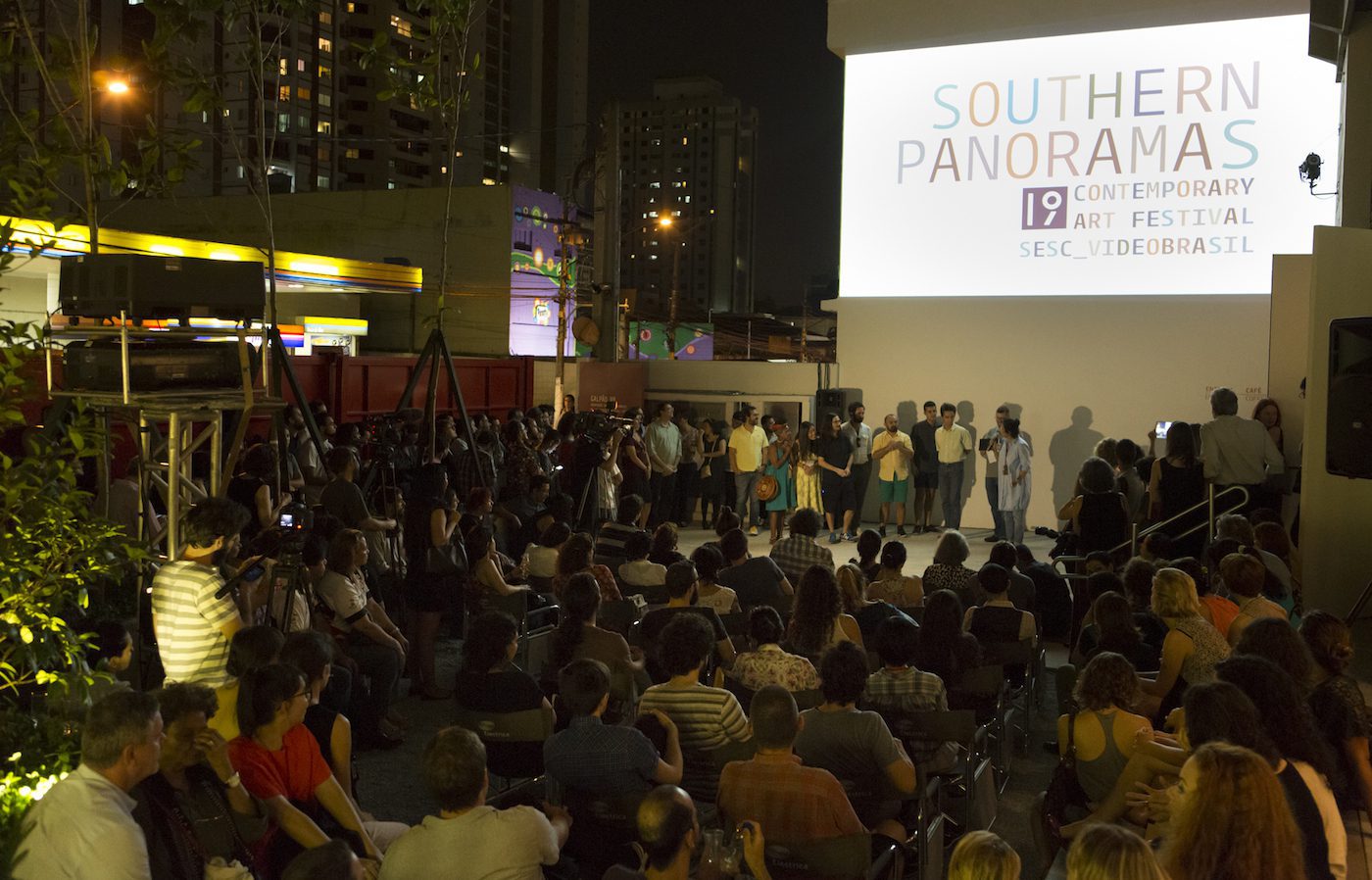 C&: Another innovating idea has been to focus on the Global South. What is your motivation and vision to collaborate within South-South contexts?

SF: The festival began working with this region as its main focus in 1992, the year of its internationalization. Starting out as a geographical condition for the selected artists, it later took on the diversity and complexity of the geopolitical concept. Since the 15th edition in 2005, Southern Panoramas has been the title of the competitive show. For the 19th edition the festival made a radical movement towards the South. Southern Panoramas is no longer the title of the competitive show, but the core of Videobrasil’s entire programming and curatorial choices, as well as the guest artists’ exhibition.

There are great discrepancies between the South and the North to this day, including the art system. Therefore, I believe that we need a completely democratic way to access the artists and for the artists to access us. That was our intention when we made an open call via the Internet that was free. What’s encouraging is the fact that each year Videobrasil seems to reach new artists. In the festival’s last edition a great number of artists participated for the first time. Many of them were also stimulated by our partnerships with institutions around the world. A large number of artists experience difficulties accessing the art circuit without a gallery or a curator to legitimize their work. We believe that the open call allows us to become acquainted with artists who are very young, far away or who have no institutional representation or access to the art system. Our partnership with Sesc São Paulo allows us to fund the artists to travel and attend the festival – this has always been a fundamental characteristic of Videobrasil’s work as we aim to include artists from all over the world.

C&: Can you tell us a little bit about the presence and visibility of Afro-Brazilian artists and cultural producers within the Brazilian art world?

SF: I think that for a long period there was a great invisibility of Afro-Brazilian artists, which is one of the consequences of a history of slavery and prejudice. Racism and inequality are still a big problem, and even though public policies and affirmative action are gradually changing this scenario, it is true that there is indeed a big gap in our society, where skin color is the deciding factor when it comes to having access to the means of artistic production. However, it is important to see that there was always resistance, creativity, quality, and most of all, diversity in the production of Afro-Brazilian artists. That is why your question is not a simple one, and could also be answered with another question. What is an Afro-Brazilian artist? Does that classification depend on the skin color or the subject of the work?

Some artists and institutions such as Videobrasil will always fight against stereotypes and certain art market-oriented classifications that cater to the “happiness, samba, and soccer” image. There are artists connected to African traditions who deal with race, ancestrality, religion, other artists with more contemporary interests, exploring themes such as gender, technology, and some who connect all of these aspects. It is important to think out of the box when discussing Afro-Brazilian art production. This said, I think that this production does not have the visibility and presence in the art circuit that matches its historical importance to our society.

C&: You are part of the curatorial team of this year’s Dak’Art. What can we expect, what is your focus?

SF: First of all, it is with great pleasure that I am working at this biennale as one of its guest curators. I was tasked to choose the artists to represent Brazil in the show I gave the title Travessias [Journeys]. It will present works by Daniel Lima, Moisés Patrício, Paulo Nazareth, Sônia Gomes, and Thiago Martins. These artists share a close connection with African identity, even though they display different profiles and approaches to said connection. The show features more tradition-oriented artists and others whose research tends to the contemporary. Some are more experienced and renowned; others are younger and not represented by any gallery. Aside from their shared African descent, which is a trait of a significant portion of Brazil’s population, and from their somehow political perspectives, what catches the eye is the diversity of strategies and the widely varied realms that these artists choose to work with – from places of intimacy to the city, from the dark oceans that harbor legacies of the past to the dusty African back roads.

Aïcha Diallo is joint Director of the art education program KontextSchule, affiliated with the UdK/University of the Arts, Berlin, and is Associate Editor of Contemporary And(C&).