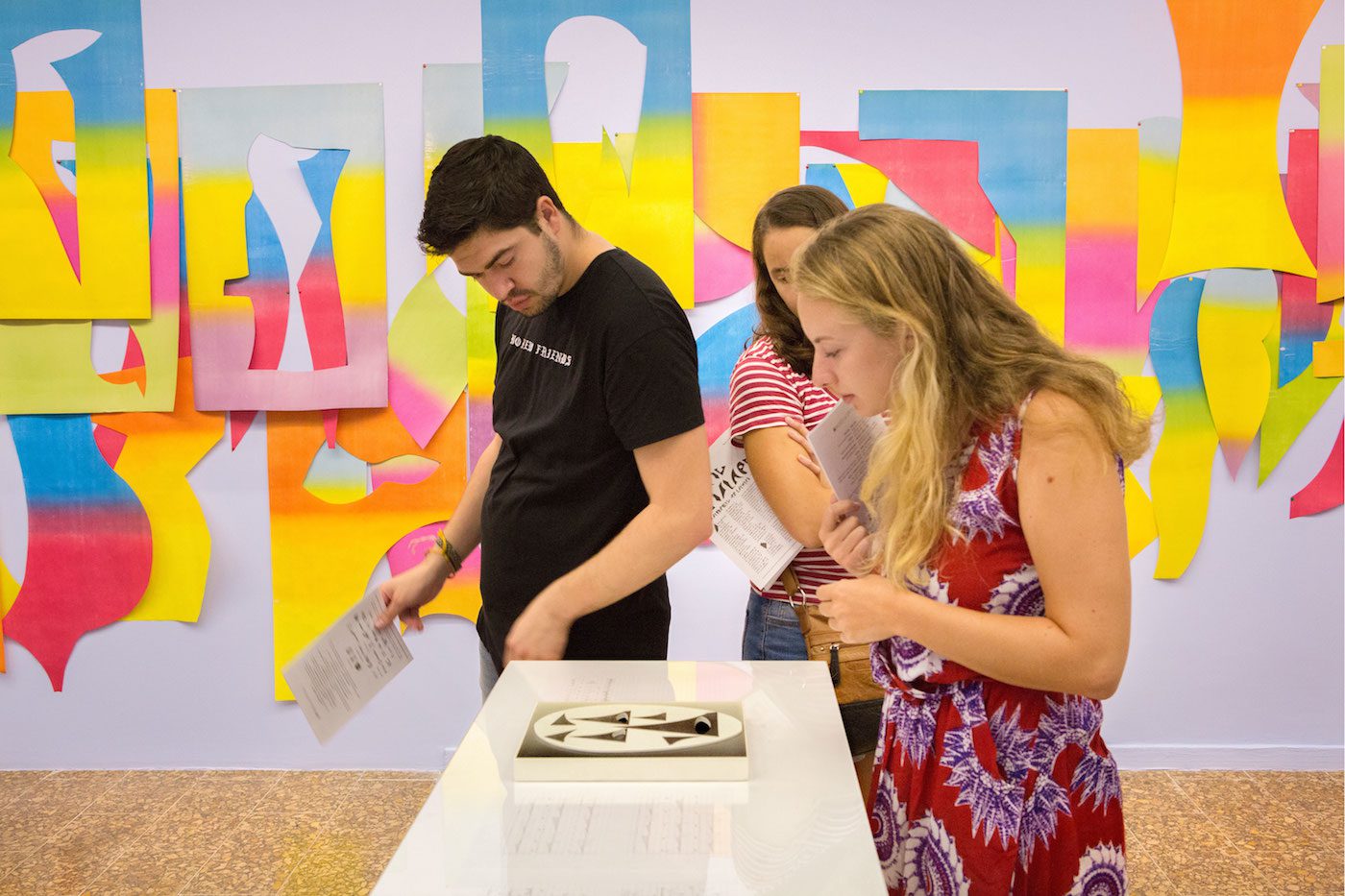 Visitors of the La Tertulia. Courtesy of the museum.
1/3
1/3

Acción Errorista, march of the Argentine collective Etcétera during the project Road to the Sea, August 2018. Photo © Ricardo Delgado/Goethe-Institut.
3/3
3/3

In Conversation with Alejandro Martín

Cali, Between Trauma And Hope

Over the past years, Museo La Tertulia in Cali has become one of the most original and important art museums in Colombia. Contemporary And América Latina (C&AL) author Ole Schulz spoke to curator Alejandro Martín about the relationship between the museum and the local communities, the history of the city of Cali and the oral memory of Afro-Colombians.

C&AL: Museo La Tertulia regularly cooperates with the most vulnerable communities in Cali. Is this work a priority or central focus of the museum’s work?

Alejandro Martín: To provide a bit of context: Museo La Tertulia was founded sixty years ago, and exhibits modern and contemporary Colombian and Latin American art. The museum has always worked closely with local institutions and artists of the region. One part of the work we do as a museum, that has become very important, is the construction of a city and the concept of ​​citizenship, in relation to communities. A recent project (August 2018) brought a collection of objects collected by the Museo Popular de Siloé, presenting its process of memory construction of Siloé, one of the most stigmatized neighborhoods of Cali.

In the Museo + Escuela (Museum + School) program, a program central to the educational work of the Museum, we work hand in hand with local artists and with the city’s public schools. For another project, Radiating Memories – Dialogues with the Carare (2017), we examine the history of the famous “Association of Rural Workers of Carare” (ATCC). During the violent 1980s, this organization established a dialogue between the involved parties of the armed conflict in the Carare region, department of Santander, seeking to create peace.

C&AL: Also, the voices of the victims of the Colombian armed conflict are frequently heard in the Museum, like it happened in 2018 with the project The Future of Memory – Road To The Sea (El futuro de la memoria – Carretera al mar), initiated and organized by the Goethe-Institut. Among other things, this project sought to examine the memory of violence in the Colombian Pacific area.

AM: The Goethe-Institut project Future of Memory arose in the context of the peace agreement between the government and the FARC guerrillas, and proposed meeting spaces between artists, movements and social leaders, in various larger Latin American cities. In Colombia, we are experiencing a very complex moment, in which the logic of territorial control is changing. Places from which the guerrillas have retreated are now going through a new struggle for control of the territory, and in many of these areas, leaders working on issues of land restitution are increasingly threatened by different armed groups that want to impose themselves. A frighteningly high number of these leaders have been killed.

In the Pacific, armed conflict, drug trafficking, and multiple violence all contribute to a long history of inequality and neglect on the part of the State.

Acción Errorista, march of the Argentine collective Etcétera during the project Road to the Sea, August 2018. Photo © Ricardo Delgado/Goethe-Institut.

C&AL: In the aforementioned project, forms of resistance were also observed through art. For example, in the port city of Buenaventura there was a three week general strike in 2017, examined in videos during Road to the Sea.

AM: The Cali event, Road to the Sea, was thought as the closing of The Future of Memory. And it sought to explore some central issues of the local problems, also picking up a on experiences and learnings from other Latin American cities. In Cali, as in the neighboring Buenaventura (Pacific), a large part of the poorest population is Afro. And many of the inequalities inherited from slavery remain the same, resulting in a situation of structural racism which dramatically affects the region.

Last year’s strike in Buenaventura, on the one hand, evidenced the inequality and the contrast between the development of the sea port and the dire situation of the population. And, on the other hand, it revealed the power of social movements in that Pacific city, and the way in which they resort to artistic practices, particularly music, to make their denunciations and affirm their ties and solidarities.

As a title for the project we chose this “road to the sea” between Cali and Buenaventura. This route has been dirt road, railway, highway and highway, and, seen from Cali, the road represented a promise of prosperity and progress. However, while the road has helped the large majority, it has also contributed to the oppression of many others. The container port of Buenaventura is thriving, but the majority of the population still lives in poverty.

Above all, the history of this transfer between the valley and the coast has marked the history of the region on both sides of the Port, and of the city of Cali, where the influence of Pacific cultures is very strong, and increasingly notorious.

C&AL: I must say, as a foreign visitor (from Germany), I am positively surprised by Cali: the city is green, the people are friendly…

AM: That is the double face of Cali: on the one hand, tranquil and jovial, and on the other hand violent and inequitable. For me, despite its charming side, Cali is a city with a dark energy and a great trauma.

The rise of Cali as a city began in the 1960s. People came from all over the world and a cosmopolitan environment and an entrepreneurial middle class grew. Still, the racist structure from colonial hacienda was never really disarmed. With the rise of drug trafficking, the city experienced a period of enormous growth in business, as drugs fed all transactions during the eighties and nineties, legal and illegal. But then,suddenly and very quickly, after the persecution of drug dealer Rodriguez Orejuela in the mid-nineties, the money left the city. That circumstance not only broke those who directly fed the drug business, but affected all enterprises and companies which had grown disproportionately with the amount of money in circulation.

The turn of the millennium saw a city largely in ruins, with hundreds of bankrupt companies and a deep general sense of depression. In recent years, especially after the administration under Mayor Ospina, a new optimism has taken hold, and the city has developed and created many new possibilities. New winds are blowing that are felt on many levels. But there are still many challenges and difficulties.

Visitors of the La Tertulia. Courtesy of the museum.

C&AL: Exhibitions in Museo La Tertulia, like Cali 71 (2016), have examined the recent history of the city. Can you tell us more about this?

AM: That was a both fascinating and very contradictory moment. On the one hand, the city invested in large urban projects, built a modern city, with large concrete infrastructures: the current headquarters of the Museo La Tertulia, the new university campus, the airport, the intercontinental hotel. Also, the sports stadium “Coliseo El Pueblo”, built for the 1971 Pan American Games, which is an iconic building with a concrete, curved, futuristic roof.

On the other hand, the students rebelled against the university project, mainly because of the North American influence, and declared themselves in a strike which was then violently suppressed. Most of that year was lived in a state of siege, and the Cold War was felt very strongly the city where the US made a powerful entry with large investments and contracts.

C&AL: How has the Museum approached the peace agreements, a very important and complicated issue in present Colombia?

AM: Surprisingly, the peace agreement was rejected by a majority of Colombians in the 2016 referendum. That simply shows that there were and still are great flaws in the communication of the agreement’s meaningful content. We live in a world that lacks empathy and commitment. Here, artists and thinkers can help with their various approaches. In the case of Road to the Sea, the exchange between artists and activists from other Latin American countries was very important. Although we are faced with very similar problems, we know very little about each other. Together, we have much work to do.

Alejandro Martín was born in 1975 in Bogotá and grew up in Cali. After studies of philosophy and mathematics in Bogotá and Spain, he returned to Cali in 2014 as curator of the Museo La Tertulia. Martín was part of the curatorial team of “Waterweavers: The River in Contemporary Colombian Visual and Material Culture”, in the Bard Graduate Center (New York, 2014), “Journey to the bottom of Cuervo”, in the National Library (Bogotá, 2012) and “Indigenous Malice”, in the Museum of Modern Art of Medellin (2011). He has also worked as an editor of several art books. In 2019 he will assume a position as artistic director of the National Artist Salon in Colombia.

Ole Schulz is a Berlin based journalist.