How to be visible both here and from elsewhere? How to bring out the elsewhere right here? These are some of the questions South African artist Bronwyn Katz grapples with in her debut solo show in Paris. Entitled A Silent Line Lives Here, the exhibition explores the possibility of overcoming boundaries even when it happens silently, writes Contemporary And deputy editor Will Furtado.

Paris is a city of sophisticated codes where the way you wear your handkerchief can signify your family clan. This can denote access and belonging but also exclusion. For her debut solo show in Paris, South African artist Bronwyn Katz picks up on the silent and subtle barriers that she encountered in the city. Entitled A Silent Line Lives Here, and curated by Marie-Ann Yemsi, the exhibition at Palais de Tokyo examines the potential of making space and moving beyond boundaries.

“The concept started with my personal experience in Paris,” Katz tells me on the stairs that lead to her underground exhibition space. “There are the cultural barriers, language, and this history that has nothing to do with me, but I’m in it.” She is referring to the relationship that France has with Africa, which despite not being directly related to South Africa still dictates how Blackness is seen or ignored in the city. The artist has long worked with concepts surrounding contemporary forms of discrimination and exclusion. And upon not seeing her Blackness reflected in central Paris, she decided to look for the places where her existence is affirmed.

Situated just north of Gare du Nord, and populated mostly by immigrants, the area of Barbès was long considered a no-go zone. However, it is exactly here that Bronwyn Katz found her first sense of belonging, where she could find people like herself – of African descent. And contrary to much of the information she found on the internet, the neighborhood was not dangerous at all. These same notions of inclusion, exclusion, and marginalization permeate her exhibition. 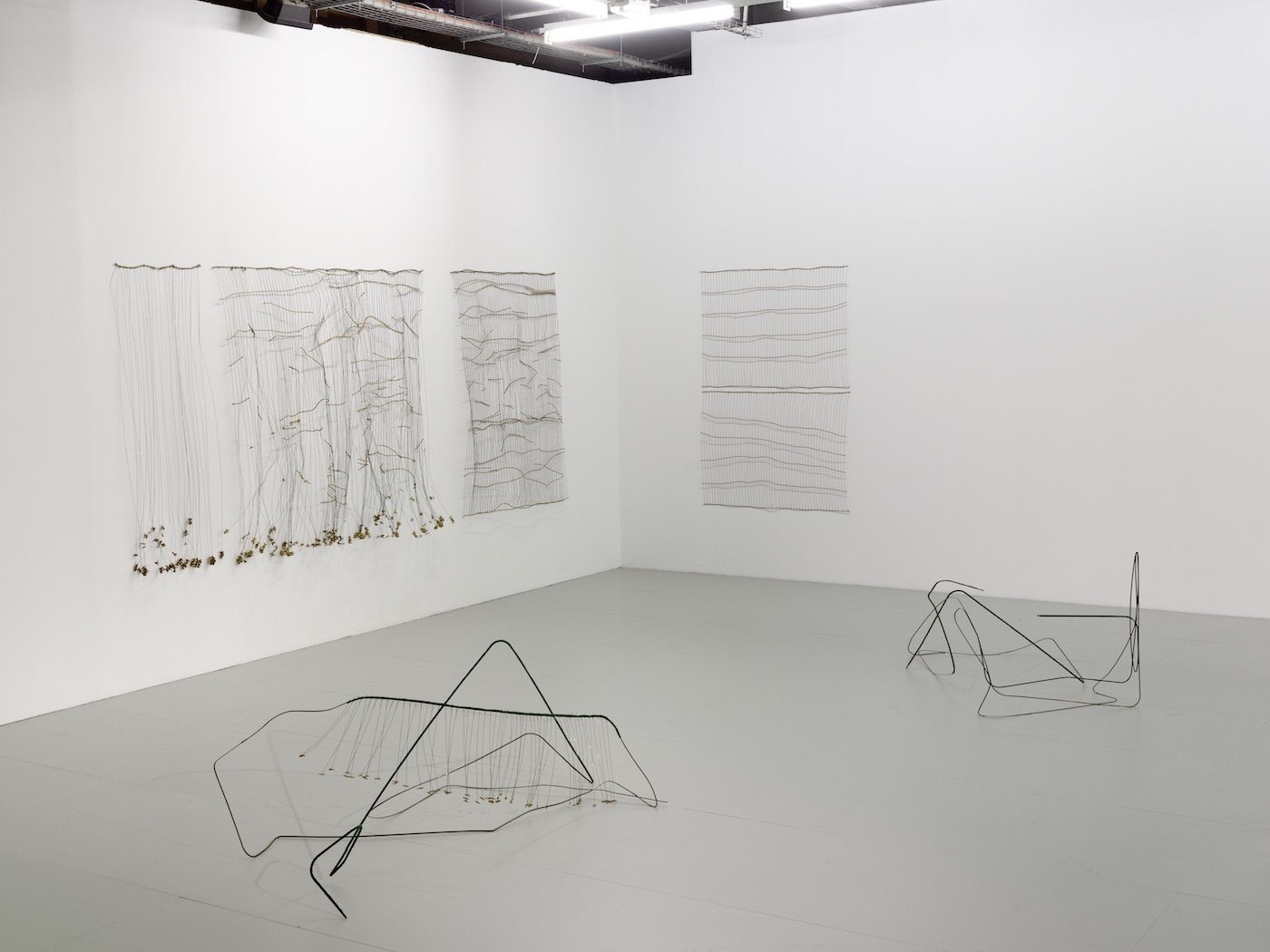 For example in Under the Barbès bridge the artist used stones to fill three vertical wire nets hanging from the ceiling. They look both delicate and rough, light and heavy. “This is me contemplating stones as a tool for building and constructing space,” she says. “But they also can be used as a weapon for a collective movement or protest.” Indeed the piece embodies a complexity and ambivalence that make references to multiple situations in the quest for taking up space. While contemplating them I sometimes perceive them to be three police batons; at other times three baseball bats – elements of two of the many sides of the same story and struggle. Simultaneously the stones appear confined, restricted, like a time bomb, much like when the riots ravaged the Parisian banlieues in 2015.

A duplexity is also present when the artist thinks of spaces – institutional or otherwise – that make you feel unwelcome yet also call for collective work to subvert it. Representing that arduous labor is the large sculpture Château Vert. Made from Katz’s trademark mattress springs, the work resembles a holed wall or a chain-link fence, making allusion to a see-through barrier and the networks of people on both sides of the fence. The hard labor that goes into putting up borders and tearing them down is also present in the fabrication of the work in which the chain-links had to be painstakingly wrapped with green wool, pointing at collective nurturing. 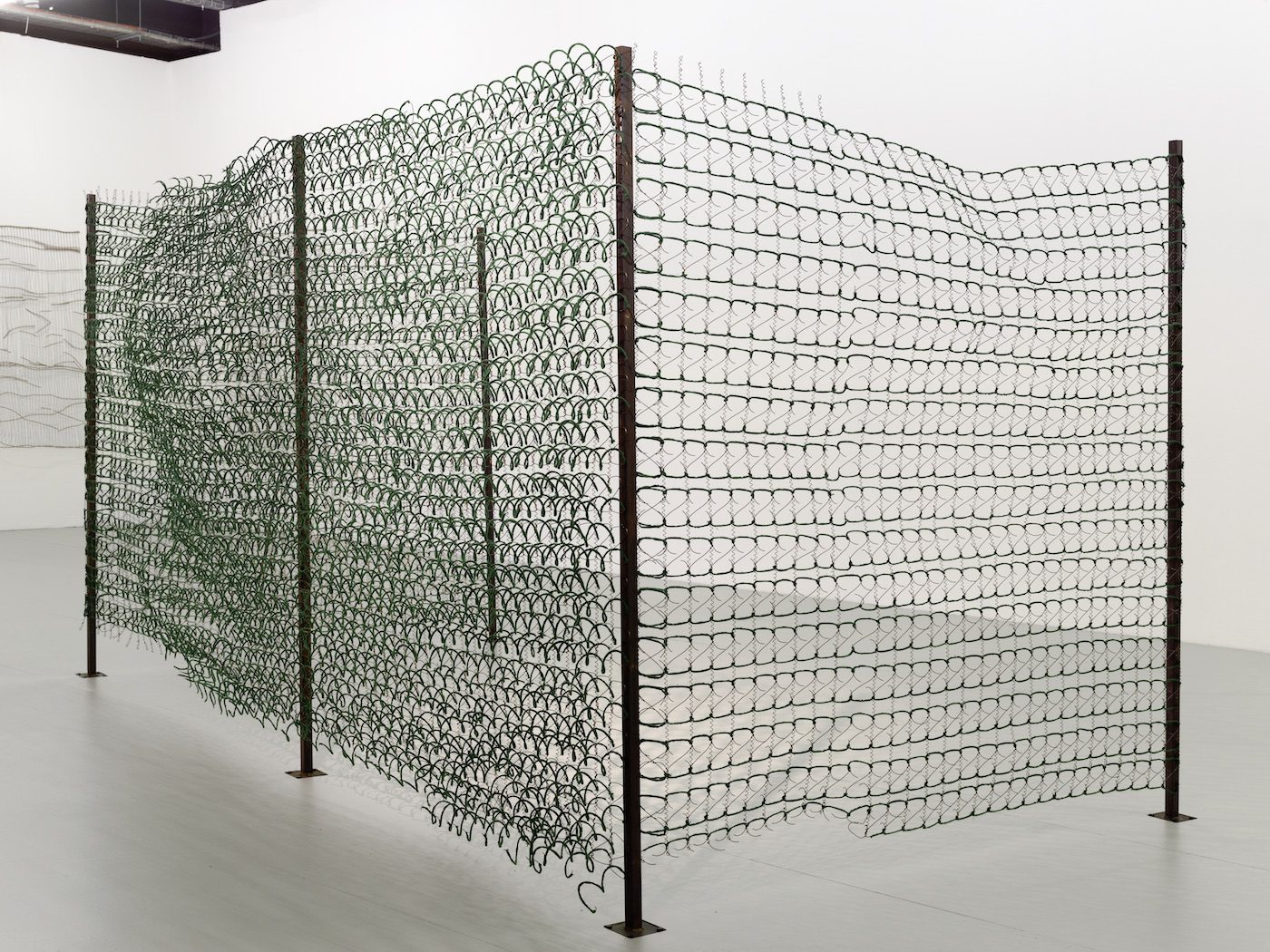 The work also makes an indirect reference to a real place in Paris – the Château Rouge neighborhood in Barbès. The subtleness of the reference is important. On the one hand there is a shared experience between Parisians of African descent and other Africans; on the other, the context must not be overlooked. As outsiders in Paris, both I and the artist were met with subtle suspicion whenever we asked locals about Barbès. Suspicion may be a byproduct of marginalization, which is exactly why Bronwyn Katz probed further to find out how she could navigate her relationship to Barbès.

“Château Rouge is a poor area by Parisian standards but for South Africans it’s really good,” she says. “There’s still this shared experience of being pushed to the margins. This is not my space but there’s a sharedness of experience. There should be an okayness to speak about it to each other.” Yet, Katz did not want to drop her own baggage in the space, so she made sure to meet people of her age group from Barbès with whom she bonded over mutual feelings of exclusion as young Black women.