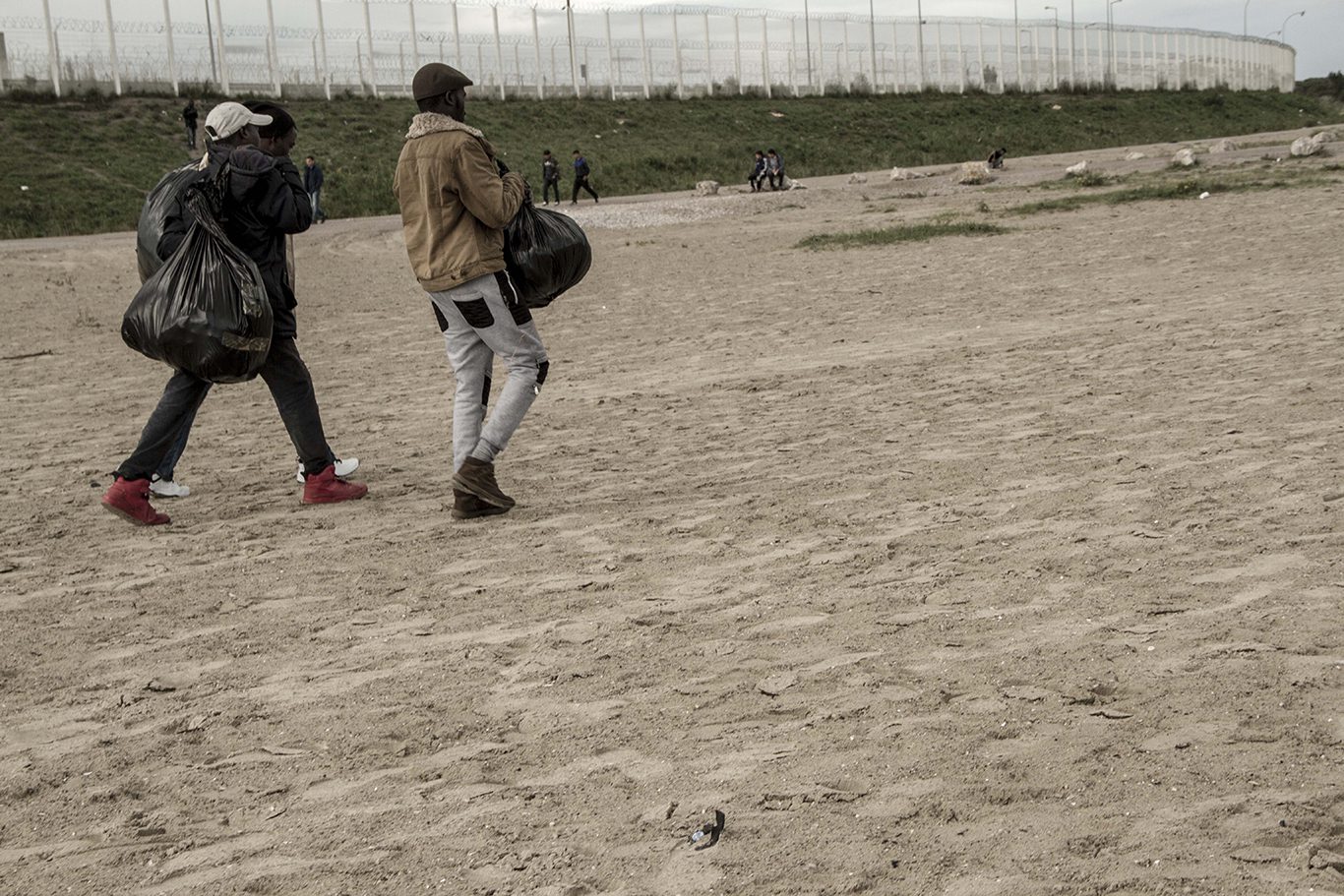 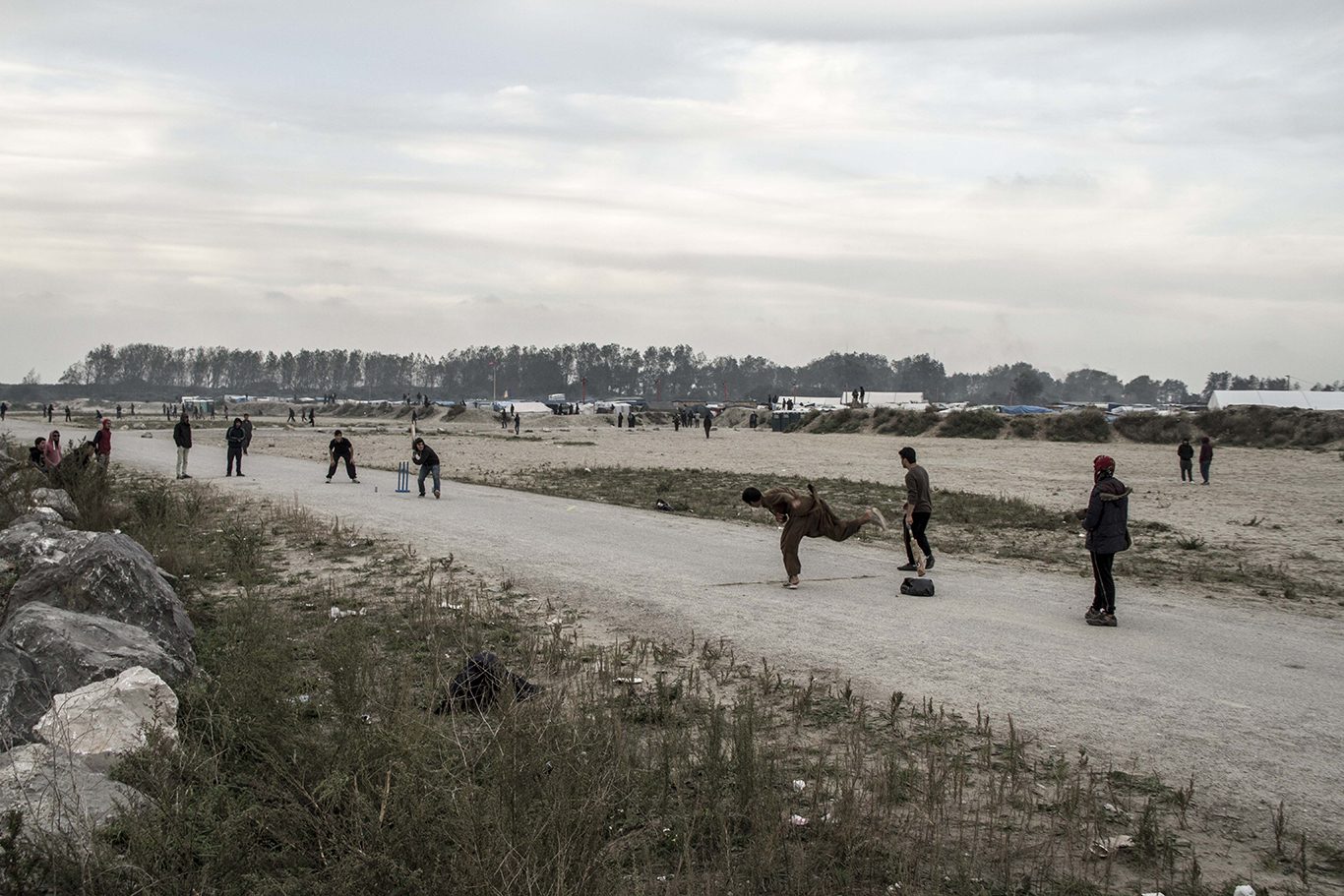 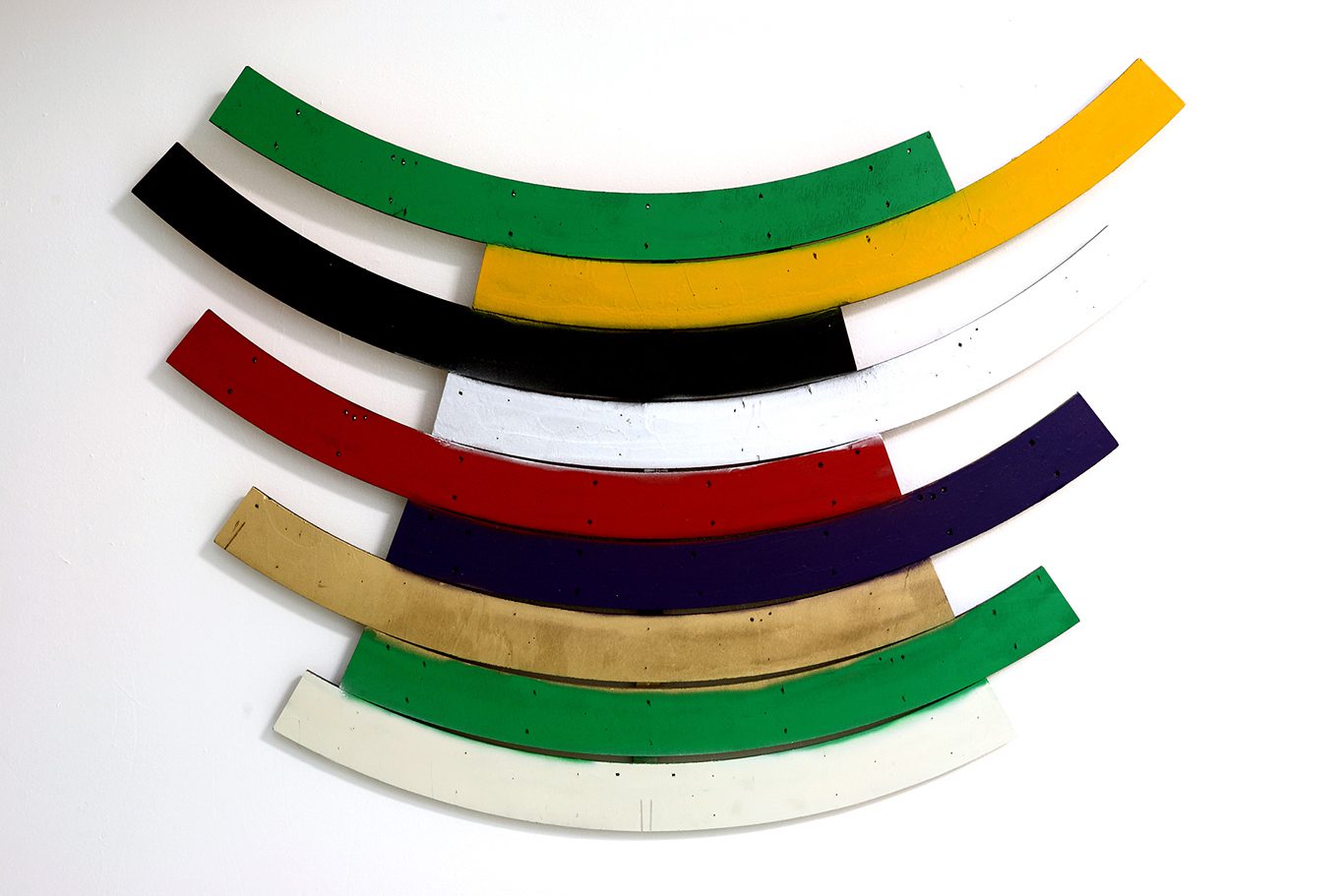 Cameroonian artist Guy Woueté takes inspiration from everyday life to create his paintings, photographs, sculptures, and mixed media works. Socially critical, his work addresses questions of migration in a globalized twenty-first century. In this interview originally published in art21 magazine, author Gauthier Lesturgie speaks with the artist ahead of his Berlin show about the importance of empathy, being trapped within the never-ending class conflict, and his experiences in Calais’ “jungle”.

Gauthier Lesturgie: Of your work, it has been written, “Woueté creates his images following a conceptual artistic approach similar to that of a reporter.” Could you elaborate on this idea, of an artist-reporter?

Guy Woueté: I have an artistic practice that combines signs and symbols (images, texts, sounds, colors, objects, etc.) from very different origins. Being directly in the field is essential to me, both for the way I am looking at and reading the topics I am dealing with. To transcribe, to record, and to communicate are definitely elements of my work that get me closer to being like a reporter. But my particularity is that my displacements and my relation to the field exist through a performative process: I experience in real time my condition—one of a migrant, an exiled Black man, a ceaselessly alleged offender—and I am always obliged to prove my humanity and face absurd situations imposed by life.

For me, as an artist, being present on site is not a wish but a necessity. Going directly in the field is to be on watch, in the hope of understanding, of seeing, and of experiencing otherness through different facets.

GL: In your published texts, the phrase “the wretched of the Earth” appears several times. It is obviously a direct reference to Frantz Fanon (Les Damnés de la Terre, 1961). With this expression, Fanon introduced a sense of community; it is not only a terrible assessment but also a call for empowerment from the deprived exploited individuals. This notion is particularly present in your project called Dominer l’anonymat (“dominate anonymity”), which originated from Patrice Lumumba’s last letter to his wife, at the end of the 1960s. In this letter, Lumumba spoke to Congolese and other populations that “share the same conditions of impoverishment and oppressions.” One can also read throughout this text a sense of community and empathy. Could you tell us more about your use of Fanon’s expression?

GW: We live at a time when many things force us to believe that human beings are doing better, thanks to the growth of knowledge in diverse disciplines. Paradoxically, one can notice more centers of dissidence (such as Indignez-vous, Occupy Wall Street, Black Lives Matter, Rhodes Must Fall, and Nuit Debout) emerging at the heart of so-called democratic and developed societies. For me, “the wretched of the Earth” are those who are trapped within the never-ending class conflict, who struggle to escape determinism and who are building or searching for spaces of freedom and sharing, within the racket caused by forces of capitalism and monopolies.

The title Dominer l’anonymat sums up, more or less, what I intend to do with this project. Who are the clandestine migrants? Who are the asylum-seekers who must spend between six and twelve months in prisons called ‘closed centers’? What is a frontier, a territory, a culture, an identity that one can’t escape or call into question? “Dominer l’anonymat” is about the “wretched of the Earth,” precisely those who, after having lost everything they owned, are still screaming, “We want to live!”

GL: For this project, you chose to produce an artists’ book, which brings together pictures and letters. Books are somehow the medium par excellence to write and archive history—and thus are strong tools for legitimizing and advancing power. Could you talk more about this choice?

GW: The letters are inspired by the final letter of Lumumba, and I wrote them from the “jungle” in Calais, addressed to “My dear partner.” These letters are just like my experience in Calais: they suggest fragmented landscapes that whisper, scream, and sing tomorrow’s horizons for the individuals who are being confused with beasts.

The book for me is a tangible space for a form of living memory. It is not really what I would call an archive, even though it is about history. The book is like a brain; we find in it an amount of matters and ideas, forms of narratives that sometimes lead us to rediscover things we believed we understood. The choice of an artists’ book for this project is a political approach that aspires to introduce plurality in the way we write history. This book is also a fragment of my journey as a migrant, an exile.

GL: The feeling of empathy runs through many of your works and ideas. I see it as a double-edged affect. On the one hand, it is human and necessary, in order to approach others and to resist oppressive prejudices and xenophobic mechanisms. But on the other hand, the belief in the capacity of “placing oneself in another’s position” can also be a perverse tool to justify and legitimize repressive and discriminatory acts and beliefs. In the text entitled Next Week, after a man told you about his living conditions as an immigrant in Malta, you write: “I imagine the situation he is describing. I see myself.” In my opinion, here you are describing a strong empathic feeling.

GW: Empathy is, from what we have inside of us, the one thing that enables humanity to live on. We must learn again that sharing and commiserating with others’ difficulties is a form of investment that will certainly not inflate our bank account but can create added value that can bring more wellbeing around us. I grew up in an environment where I was taught to appreciate symbolic gestures, to be available for others and the community. And this is also present in my art practice. Artists, through their work, through the aesthetic they propose, can be mirrors to society and witnesses of their time. We are beings of reason, able to feel and to imagine ourselves in the shoes of others of our kind in order to tell, for them and for us, the complexity of our world, of being human.

There are plenty of beautiful things in this world, and I find it a shame that most human beings do not have access to them. We can either put things into perspective, telling ourselves “c’est la vie” and that a perfect balance does not exist. Or we can say no to this kind of relativism that furthers the system of commoditization, that considers us all as pure statistics.

Gauthier Lesturgie is a translator and a writer living in Berlin.