Art X: Expanding the Notion of Art Fair in Lagos

Art X is a young art fair that is strengthening the art scene in Lagos and beyond. Now in its second edition, we spoke to Art X’s curator Missla Libsekal about the fair’s new Special Projects which include Olatunde Alara’s project on mental illness and a focus on artist Ndjideka Akunyili Crosby.

C&: What can we expect from the second edition of Art X Lagos?

Missla Libsekal: A continuation of the work that Bisi Silva as art director of the inaugural edition laid down, with the intention to provide a platform for contemporary art, so that it may have a robust home in Lagos to grow from. This year, two of the fair’s main sponsors have made it possible to make Special Projects, which is a new aspect for the fair. We will showcase a series of sculptures produced by the late modern artist Ben Enwonwu, artworks from the private collection of Access Bank that have never been exhibited to the general public. As a sponsor, Absolut is committed to advocating for freedom of expression and has provided the opportunity to commission a young artist, Olatunde Alara, to produce an installation and time-based performance that reflects on the stigmas around mental illness. These two presentations tie into the concept and programming for this year’s talks and curated projects.

C&: What is the concept behind your section Talks and Special Projects? Can you already give us a first insight into the list of speakers?

ML: This year’s curated projects include solo presentations, along with two new sections: Special Projects and Performance. One of the arcs weaving throughout is the consideration of key historical Nigerian figures and events from the twentieth century. By activating and thinking about these histories, we ask how that will inform our reading and understanding of the present. Furthermore, the solo artist presentations explore the choices informing primary material selection by artists, and the unique alphabets they devise in order to articulate the inventive and shape-shifting nature of art, and how it offers a reading and perspective on the present. In thinking about a lineage of sculpture and pioneers from the likes of Ben Enwonwu to Demas Nwoko, Olu Amoda will be in conversation with art historian Frank Ugiomoh. Chimurenga magazine will participate in a lecture performance, grounded in their interdisciplinary approach to speak about their work through the Chimurenga Library on Festac ’77, as we think about the 40th anniversary of this festival which, although largely forgotten, scale-wise remains the largest pan-African arts gathering. N’Goné Fall, who just last year curated the show When things fall apart: Critical voices on the radar in Copenhagen to consider the relationship between arts, the contemporary political landscape along with activism, will lead a conversation on the aesthetic ideas and ethical projects influencing the practices of Lagos-based artists Wura-Natasha Ogunji and Peju Alatise. This edition there will be fewer talks, only six, with an emphasis on artist conversations. So we look forward to introducing the recent MacArthur ‘Genius’ Grant winner, Ndjideka Akunyili Crosby to local audiences, as well as to having Lemi Ghariowku share about his practice and work with Fela Anikulapo Kuti.

C&: What were the challenges of collaborating with an art fair and what is your personal ambition behind it?

ML: I am interested in the ways that we can advocate and create spaces for artistic practice to flourish, and infrastructure is critical to this conversation. Art X provides a commercial platform that is keenly interested in building nodes regionally, continentally, and across the North-South divide. I am interested in the idea of a de-centered art market, or at least how this would materialize continentally. The tensions caused by distant markets on local production, can only be counterbalanced by the strengthening of local markets. 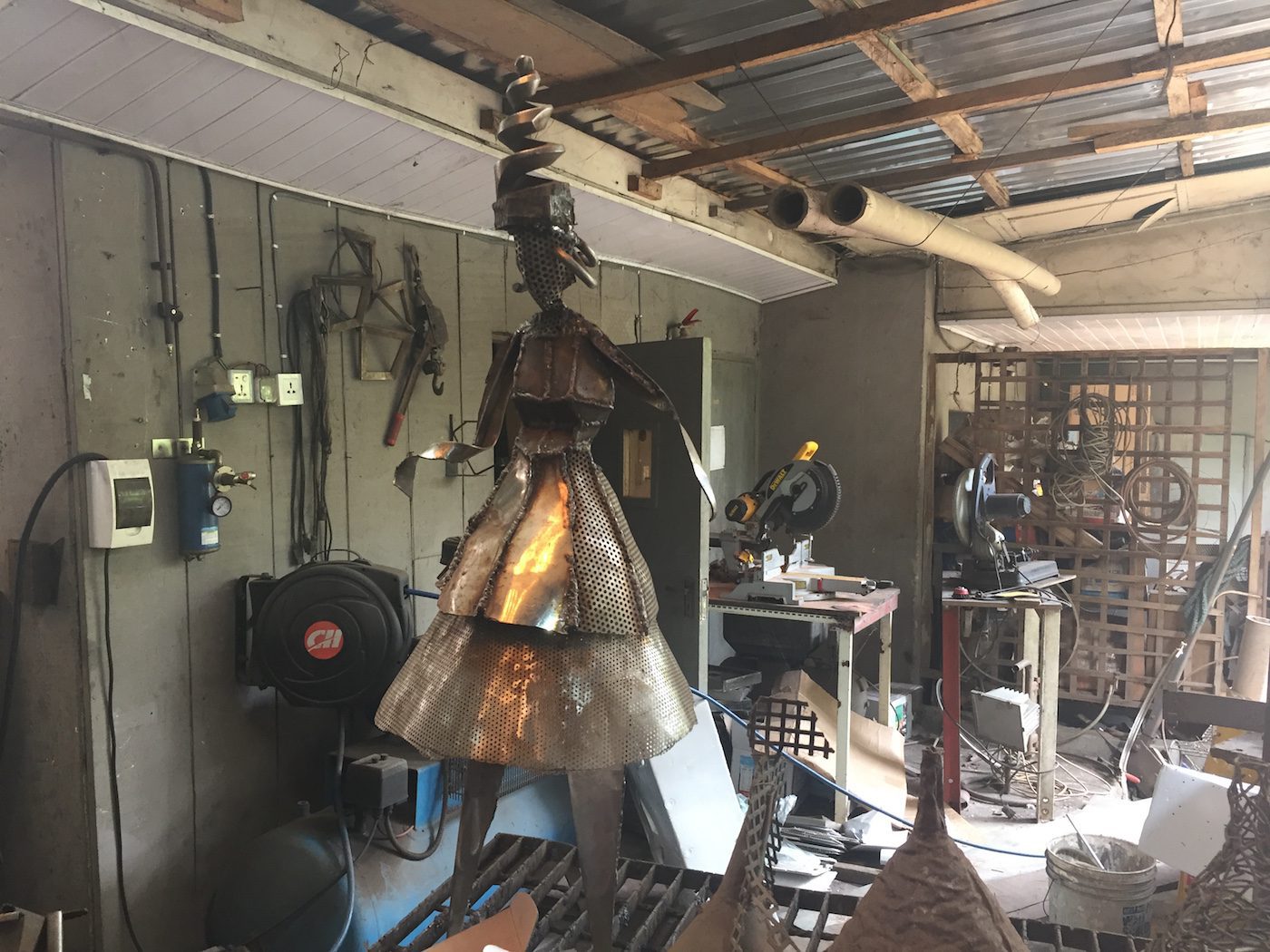 C&: As you are based in Vancouver, what were the most striking aspects of the Lagos art scene for you when you came there to develop the Art X projects?

ML: Studio visits have marked my time and encounters within Lagos-based artists; I am instinctively curious about what it means to live with art and the unique ways in which this articulates. In the intimacy of the each artist’s studio, you are invited to enter into a universe. Olu Amoda, one of the artists participating in the curated projects and talks, is an apt example of this. When you cross the threshold into his Maryland property, you enter into this garden oasis that flows into a workshop, studio, and home, which all together are a mise-en-scène for his artworks. You are able to see the progression of his career, the range of mediums engaged, from two-dimensional drawings to three-dimensional sculptures of varying scales and forms, his experiments, the techniques evolved and so forth. His metal sculptures that take many forms, from architectural reliefs, to interior furnishings to abstract objects. Marvelously they don’t fight the humid gown that cloaks Lagos, but rather they become both the objects and visual symbols that personalize and make the view into contemporary life here specific and unique.

C&: What’s next for you after the fair?

ML: A cultural advocacy and writing project in Japan that bridges the language divide with non-Japanese speakers. It is a continuation of a project that began last year and connects me back to this land and culture, where I lived for ten years and continue to be deeply influenced by.

Art X Lagos presents the second edition of its annual contemporary art fair and will return from Friday 3rd November until Sunday 5th November 2017 to The Civic Centre in Victoria Island, Lagos.