Our author Taylor Renee Aldridge takes a closer look at Jelili Atiku's social art practice in the light of the show Material Effects.

Currently on view at the Eli and Edythe Broad Museum in East Lansing, Michigan, is Material Effects. The show, curated by Yesomi Umolu, features several installations by contemporary West African artists, who are thinking about the role that objects play in contemporary life by addressing the implications around globalized materials and the influences capitalism has on such objects.

Material Effects is rooted in the philosophies of Senegalese artist and philosopher Issa Samb. At the entrance of the first of two gallery spaces, his philosophies on objects and value are presented by way of an interview between Samb and artist Antje Majewski. On the 40-something inch television screen the interview is being shown on, he speaks candidly about the use of materials within his work. He is explicit on the spiritual value systems that revolve around (found) objects and our responsibilities as humans to value, respect, and repurpose them.

One of the three commissioned artists exhibiting in Material Effects, Jelili Atiku, speaks to objects and materiality in a range of nuanced ways that consider Samb’s philosophy. Atiku’s social art practice has made a global impact – from environmental sustainability performances to public interrogations of unjust political systems. As a self-proclaimed “human rights artist,” Atiku works at the intersection of political query and social justice through provocative performance art. For Material Effects, Atiku presents a site-specific piece, a video installation, and a live performance piece that took place during the opening reception of the exhibition.

His video installation In the Red features the agile artist adorned in an electrifying red garb resembling the stereotypical costume of a mummified person. Atiku’s entire body is completely covered in this garment. In the video, he dismantles, repositions, and examines pieces of a real life-size skeletal frame. Atiku screams in anguish throughout the visual performance as he continues to carry the skeletal parts on his back, crawling in a disparate manner amidst onlookers. The red garb represents great amounts of blood spilled on land, thus creating mummified humanity. 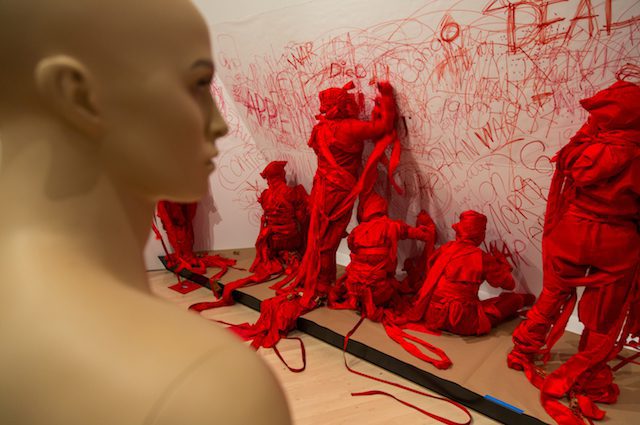 Atiku’s video work is accompanied by several life-size mannequins wearing the same electrifying red garb, fixed in a formidable, impenetrable stance. Adjacent to the mannequins is a large diagonal wall with red writing. This writing, I later discovered, is what is left over from Atiku’s installation performance, intended to leave a physical and psychological mark of his actions and the participation of the audience. Atiku’s work is uncomfortable, yet intriguing, and begs consideration of a morbid notion around the commodification of objects related to the marginalization of human bodies.

Shortly before he departed from East Lansing, I had the opportunity for a brief meeting with Atiku. Despite his provoking performance art, he was quite reserved. In retrospect, I realized this quiet demeanor was quite reflective of the artist’s work and his presence as a visual performer. In his performances he is often clothed, covered from head to toe, yet while his choice of costume permits a certain anonymity, he provokes onlookers through the disturbing sounds of screams and moans of agony.

The disturbing provocation in this piece and other related performances have proved problematic in his hometown in Nigeria. Atiku presented a public performance in Ejigbo, Lagos in early January 2016. A few days later, he and a few other performers were arrested for allegedly not consulting with the traditional ruler in the area. Atiku was recently released after experiencing extreme brutality during his confinement.

Considering his unjust arrest, the abuse he experienced, and the possible threats he faces because of speaking freely and creatively (on domestic terrorism), Atiku’s work, in- and outside of Material Effects is even more relevant now than it has been before. While he is exclusively addressing issues in his hometown, his work resonates with injustices happening across the globe. Because everywhere bodies that are considered worthless because of skin color, religious practice, or socio-economic status are compromised physically – and deemed only commodifiable with little to no humanity.

As I consider Issa Samb’s philosophies on object and material, I think about Atiku’s work in the ecosystem of co-opting material and the agency humans have over their bodies (or lack thereof) in certain value systems. How can we procure objects? How can we own and repurpose objects when at times we have no ownership or full autonomy over ourselves?

Atiku intentionally centers the body as the most significant object of them all in related material – an ambitious and revolutionary act – using and ultimately compromising his own body in the process. With this in mind, arguably the ‘world’ of an object, as Samb would say, depends heavily on the mortality (and even immortality) of humanity.
Material Effects – Contemporary Art from West Africa and the Diaspora, November 6, 2015 – April 3, 2016, Eli and Edythe Broad Museum in East Lansing, Michigan, USA
Taylor Renee Aldridge is a Detroit based writer and editor of the online journal ARTS.BLACK. She is a recent graduate of Harvard University’s Museum Studies Masters program and she received her BA in Art History from Howard University.