The Brazilian artist and essayist Beto Shwafaty visits an exhibition about artists of African descent from his country and wonders why Afro-Brazilian culture and society in general are still so marginalized today.

The image of people from African descent has figured in the Brazilian national imaginary since colonial times. But it was not until the early twentieth century that artworks started to portray them differently, seeking to cherish the now-freed slaves as a sociocultural symbol of a new era. These modern artworks embodied the popular and national, the heroic and prosaic, in the search to construct a new Brazilian identity in a country that was seeking to be free of its past. However, these images accomplished all that almost without addressing the social dramas that slavery, captivity, and the consequent abolition had caused. Paradoxically, this new imagery inaugurated an allegedly rich social imaginary within a society that did not accept itself as mixed. 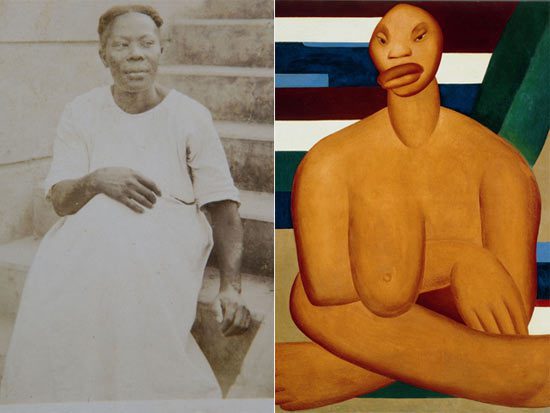 Left: a wet nurse who worked for Tarsila do Amaral’s family, supposedly inspiring the painting A negra (The Black Woman) from 1923

These visual representations functioned as contrapositions to the social bleaching policies of the young Brazilian Republic, where the government regulated (1) immigrants’ ability to enter the country. Such policies were based on intellectual trends concerned exclusively with the momentary value of the slaves and mestizos for adapting Europeans to the new climate, allowing the final conquest of the new world. On the other hand, these artworks also confronted narratives in which a still-academic artistic system described Afro-Brazilians as social and artistic problems: Was it even possible to represent a worker who had once been a slave as ideal?

Even as they harbored a progressive desire, these modern representations based on Western canons did not claim any African influences or signals that were inherent to the modern European art, and neither were they porous enough to recognize the presence of Afro-Brazilians themselves as new actors or subjects. This double failure maintained, albeit indirectly, the idea of the “barbaric black” as a positivist and partial truth based on rigid values that underestimated the value of a different cosmology and worldview. The representations of freed Afro-Brazilians created a new idealized image that, despite being progressive, did not facilitate the emancipation of those subjects and their inherent cultural values from colonial imprisonment. 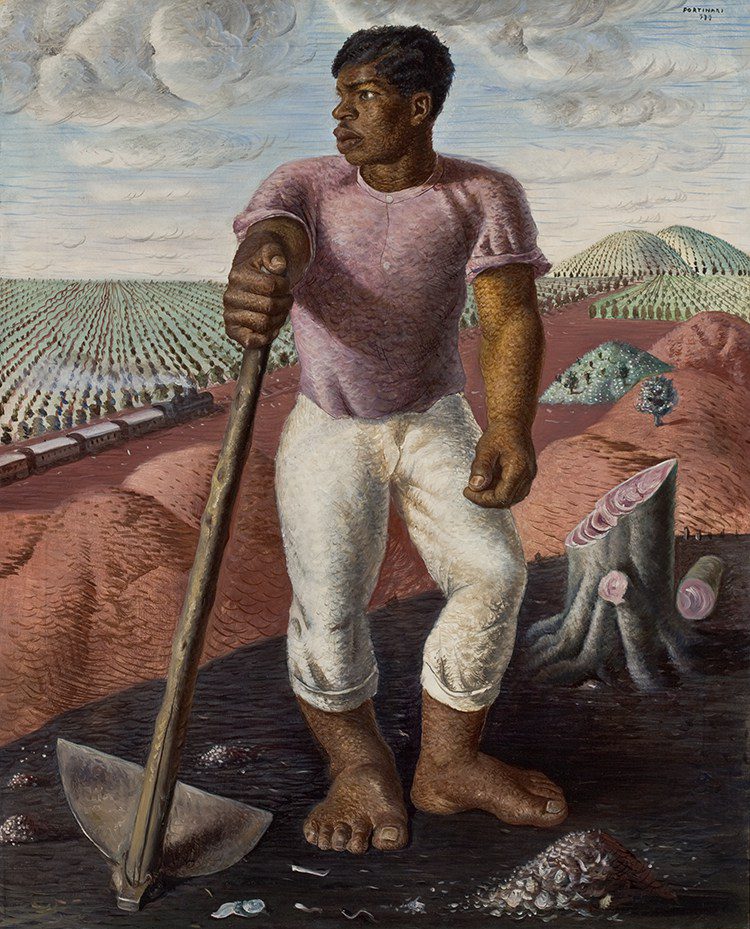 All that stems mainly from the fact that crafts, manual labor, and small-scale work were commonly associated with the Afro-Brazilian subject. “Western” knowledge was assumed to be “white capital” to be transferred to the slave population, educating them in the most varied of tasks. The image of the Afro-Brazilian always served to ground discourses of cordiality, servility, and coexistence. It is not by chance that the visibility and social inclusion of Afro-Brazilian populations was always seen as problematic, an attitude that can be directly attributed to prejudice and racism. Society at large still maintains programmatic ignorance regarding the true role of Afro-Brazilian roots as founding elements of society itself, a situation that has always prevented the cultural emancipation and social empowerment needed for these cultures to be fully enacted and acknowledged. 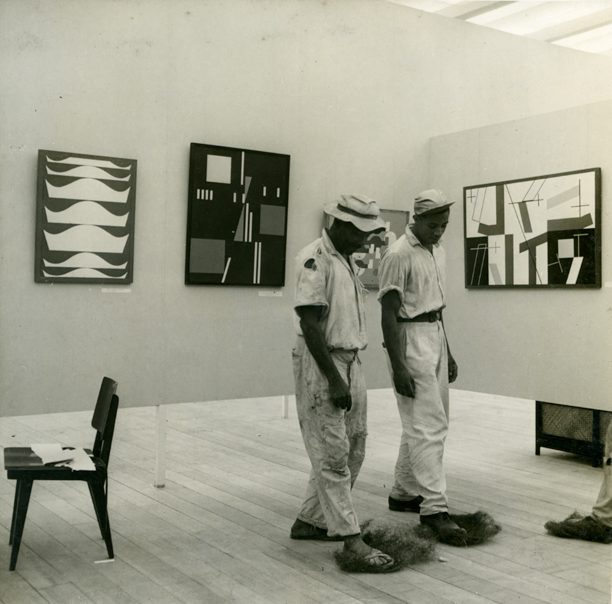 Those perceptions also still occur in the current cultural scene and are no different in the field of visual arts. Even today, we hardly see Afro-Brazilian artists or even viewers at most contemporary art events, at least not in the major cities. In public, we only see black laborers, factory workers, security guards, waiters, nannies, and secretaries. This state of affairs is an important entry point for approaching institutional productions that attempt to address this complex field. I will briefly point out examples, such as the exhibition Territories: Artists of African Descent in the Pinoteca’s Collection. 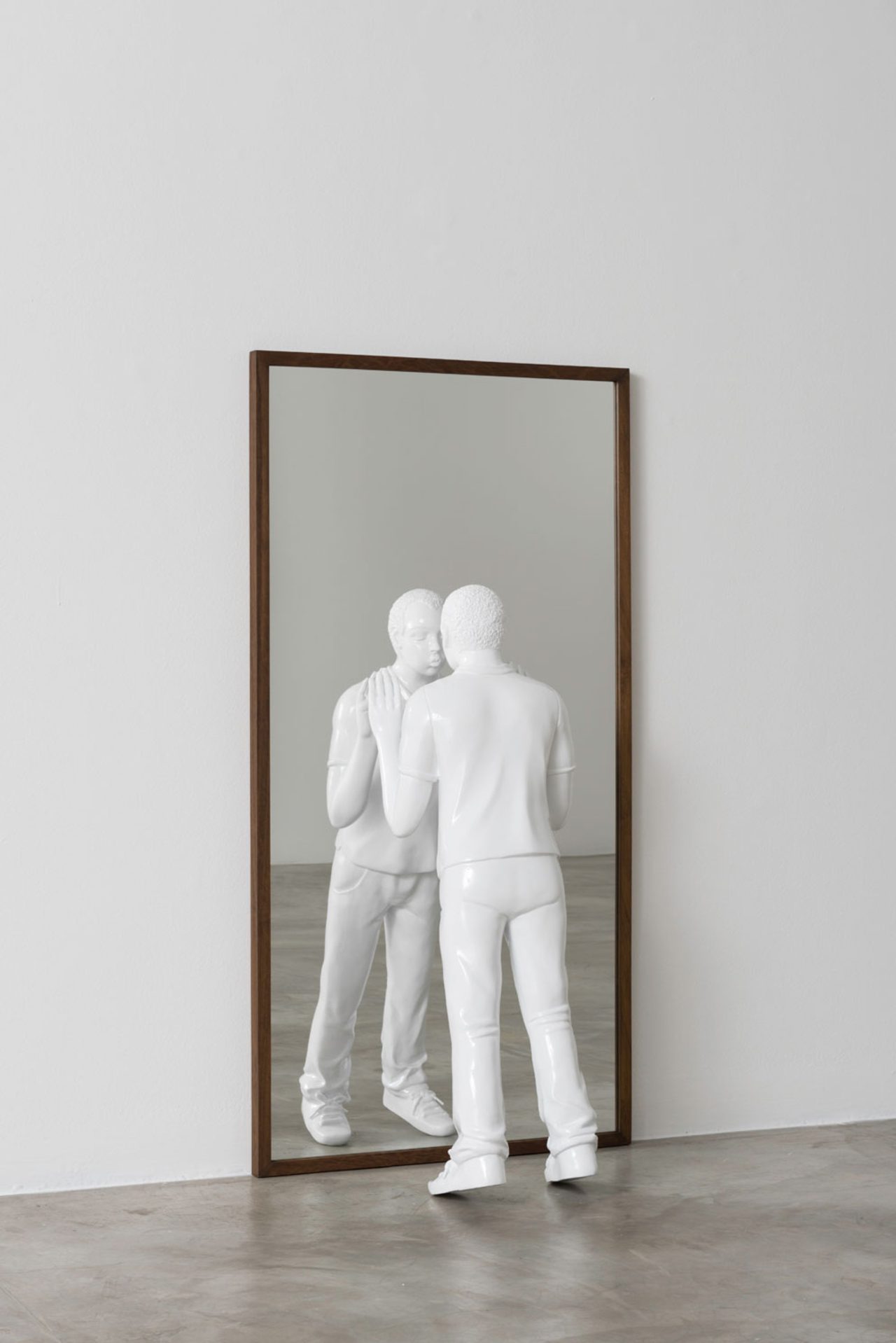 Before I Forget, 2013. Territórios: Artistas Afrodescendentes no Acervo da Pinacoteca (Territories: Artists of African Descent in the Pinoteca’s Collection), curated by Tadeu Chiarelli. Photo: Isabella Matheus for the Pinacoteca do Estado

Territories brought together solely works belonging to the Pinacoteca do Estado de São Paulo’s public collection to draw an overview of the importance of the production by artists of African descent in the history of Brazilian art. A notion of territory was defined as a curatorial axis, which divided the show, generating “matrices” (Western, Contemporary, African) that were meant to articulate the issues and discourses of each group of works. This approach was limited both by the exclusive and general assembly of works from the collection, and it left out complex sociocultural subjects. We could see in this organizational attempt a struggle to establish connections, confrontations, and dialogues between the specific works exhibited.

Obviously, great artists were included in the show. However, the public discourse and conceptual reflection did not reach the same quality as some of the pieces presented. The main problem seems to be the project’s very premise: a difficulty generated by betting that the recognition of African descent, as an ethnic background, would be sufficient to generate a strong curatorial hypothesis and discursively unite the works and surrounding subjects, all without considering that this commonality in fact derives from a sociocultural struggle, a permanent condition that is historically defined by political regimes of non-coexistence, invisibility, and deprivation of spaces. 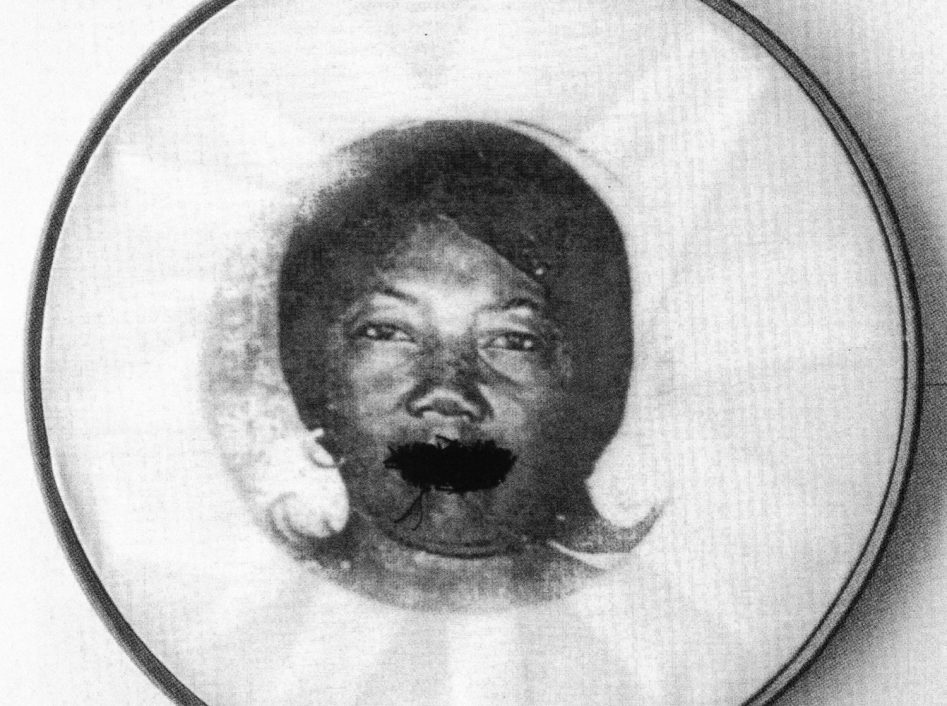 A major institution like the Pinacoteca could relatively easily organize loans, employ archival strategies, and rely on documentary articulations to enlarge the field of discussion. Including artists and discourses not coming from matrix of clear African descent while touching on other aspects of some key subjects could have added the questions and friction necessary to establish counterpoints and narratives deviating from the official ones that seemed, in the end, to inform the show. This exhibition reasserted a strong chronological, formal, and linear system in which not only works, but the subjects themselves, the artists, seemed to become representations again.

Even if the question of identity is key, it does not summarize the discussions on the complex Afro-Brazilian issues in the field of culture. Topics like spaces of coexistence as well as class and the rights issues remain almost unmentionable in the country, because they stumble over the very idea of national identity and over the regimes of visibility, inclusion, and social function. This ignorance  generally adds to the violent situations in which the Afro-Brazilian populations are still immersed.

It is therefore imperative to recognize the religious, cultural, and popular practices of the Afro-Brazilian universe as key factors in the formation and current sociocultural developments of Brazilian society. Numerous Afro-Brazilian artists have responded to these inherent connections. Yet the question remains: Where do Afro-Brazilian culture and its actors fit in? Who can speak, and how, about their importance and value in the current state of affairs? How can they articulate and move in such a field without incurring the various types of violence that, consciously or unconsciously, are repeated and perpetuated? Violence against Afro-Brazilian culture is far from being a thing of the past. There are still countless cases of assaults and attacks on Afro-Brazilian communities today.

It is paramount that we break down the social understandings and patterns that push various Afro-Brazilian manifestations to the margin of the official narratives, especially when it comes to writing history. We therefore need to ask ourselves what cultural and curatorial actions can contribute to the understandings about the fundamental position of people of African descent in Brazilian society. If they do not escape those recurring logics of prejudice, they will at most reaffirm a long history of control and separation, which now seems to work through apparent integration.

(1) Decree 528 of 28 June 1890 opened the country to European immigration and stipulated that blacks and Asians could only enter Brazil with Congressional authorization.

Beto Shwafaty is an artist and researcher based in Brazil. He has been involved with collective, curatorial, and spatial practices since the early 2000s, and as a result, he develops a research-based practice on spaces, histories and visualities, connecting formally and conceptually political, social and cultural issues that are converging to the field of art.