Their works span the show-stopping, crowd-pleasing Ghanaian pavilion to the immersive and complex South African exhibition and lead to Zimbabwe’s modest reflection of its economic realities. They offer artistic perspectives from Cote d’Ivoire, Mozambique, Madagascar, Algeria and Egypt. Yet C& author Liese van der Watt muses on why the most compelling artists from Africa at this year’s Venice Biennial engage the notion of transnational realities rather than national representation.

We have to start with the Ghanaian pavilion, curated by Nana Oforiatta Ayim, designed by architect David Adjaye, and with input from the late Okwui Enwezor. Yes, it is a showstopper: Challenging the idea of the neutral white cube, a Adjaye has designed a gorgeously sinuous series of spaces in the texture and ochre color of African soil, invoking Gurunsi earth houses, each space enveloping the work of a prominent artist who identifies as Ghanaian in some way or another. El Anatsui opens the first space with a huge gold wall-hanging, invoking the country’s historical wealth, and very much announcing Ghana’s spectacular entrance to the Venice Biennial. John Akomfrah shows a trademark three-screened projection that veers – even for me, an ardent Akomfrah fan – a little too close to formula with elephant herds against orange sunsets, but is thankfully underscored by a foreboding sonic track that reigns it in and steers it back to his familiar devastating poetics. Included also is a rarely seen archive of Nigerian photographer Felicia Abban’s studio portraits of elegant Ghanaian women around the moment of independence, setting up an anticipatory conversation with the vigorous figures populating Lynette Yiadom-Boakye’s canvases in the next room. 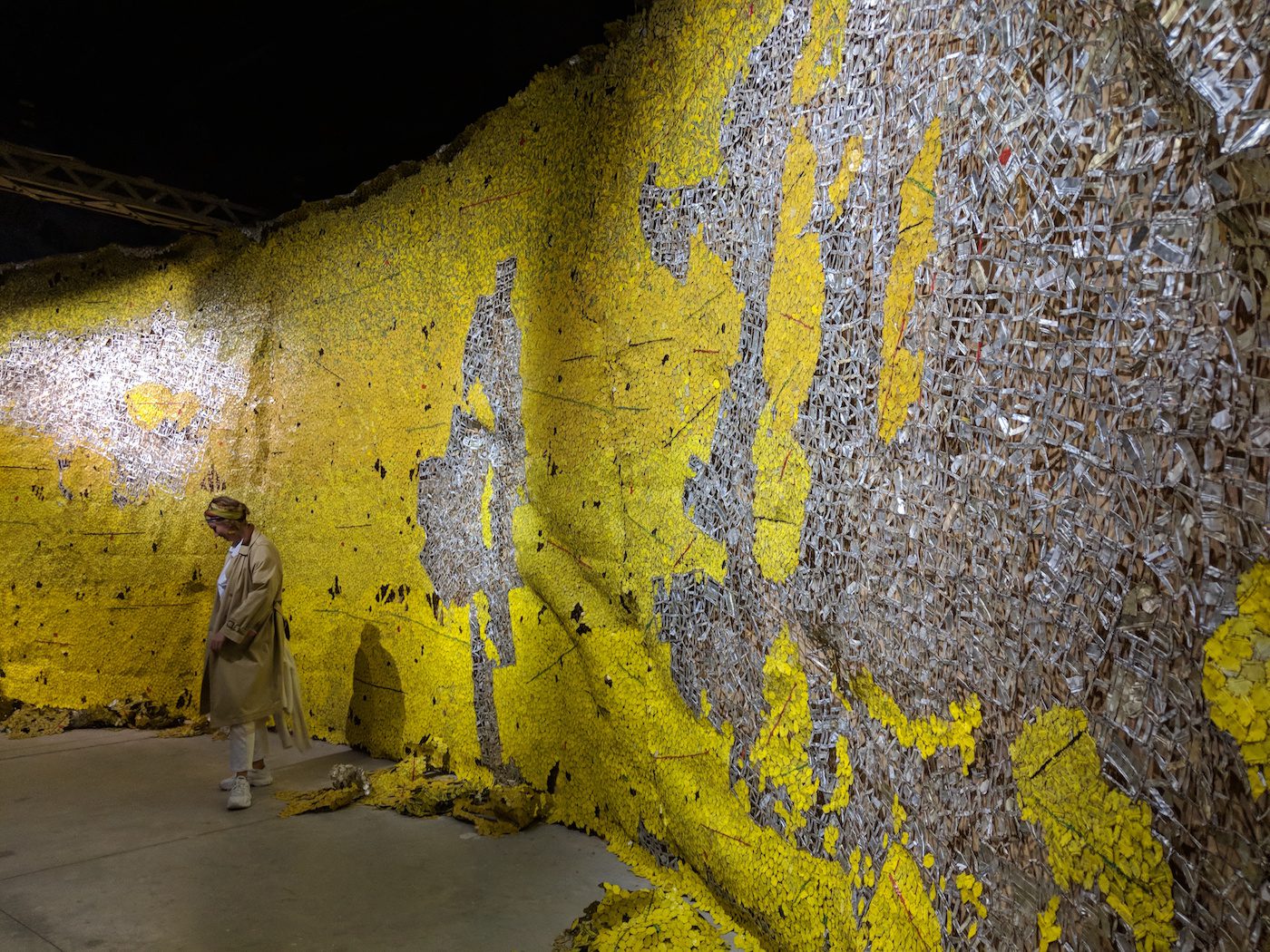 Not surprisingly, despite or maybe because of its crowd-pleasing beauty and inclusion of big names, Ghana’s exhibition doesn’t win best pavilion. That honor goes to Lithuania. The artworks in the Ghana’s pavilion are perhaps too disconnected from one another, as if curatorial intent lay elsewhere – in the assertion of an unapologetically “national” pavilion. Funded in part by the government, it represents a moment of “narrative-building,” as Ayim puts it, announcing not only Ghana’s participation in an international cultural world, but also its desire to move away from the postcolonial, probably towards what President Nana Akufo-Addo has called in his presidential manifesto “Ghana Beyond Aid.”

A not dissimilar instance of disconnect, this time between curatorial intent and artistic practise, troubles the South African pavilion. It is entitled “The Stronger We Become” by curators Nkule Mabaso and Nomusa Makhubu in reference to British singer Labi Siffre’s 1987 hit (Something Inside) So Strong, which became an anthem against Apartheid South Africa. In a strong and eloquent response to the current socio-political moment, they invoke resilience as resistance, a “will to resist [that] has not been eroded by the politics of reconciliation” in the post-1994 era. Their argument is persuasively made in the small catalogue distributed in the pavilion and supported by an essay from Gabi Ngcobo. Both essays, but especially that of Ngcobo (echoing her curatorial statement at the Berlin Biennial last year), propose a strategy or theoretical framework that works against historical narratives and toxic subjectivities. Invoking the legacy of Winnie Madikizela-Mandela, they proclaim a personal politics of intimate and ever-expanding re-articulation, of opacity even, and of a refusal to give or take answers. Clearly curatorial intentions (at both biennials) are aligned, probably pointing to a robust critical dialogue that attends creative practice in South Africa. 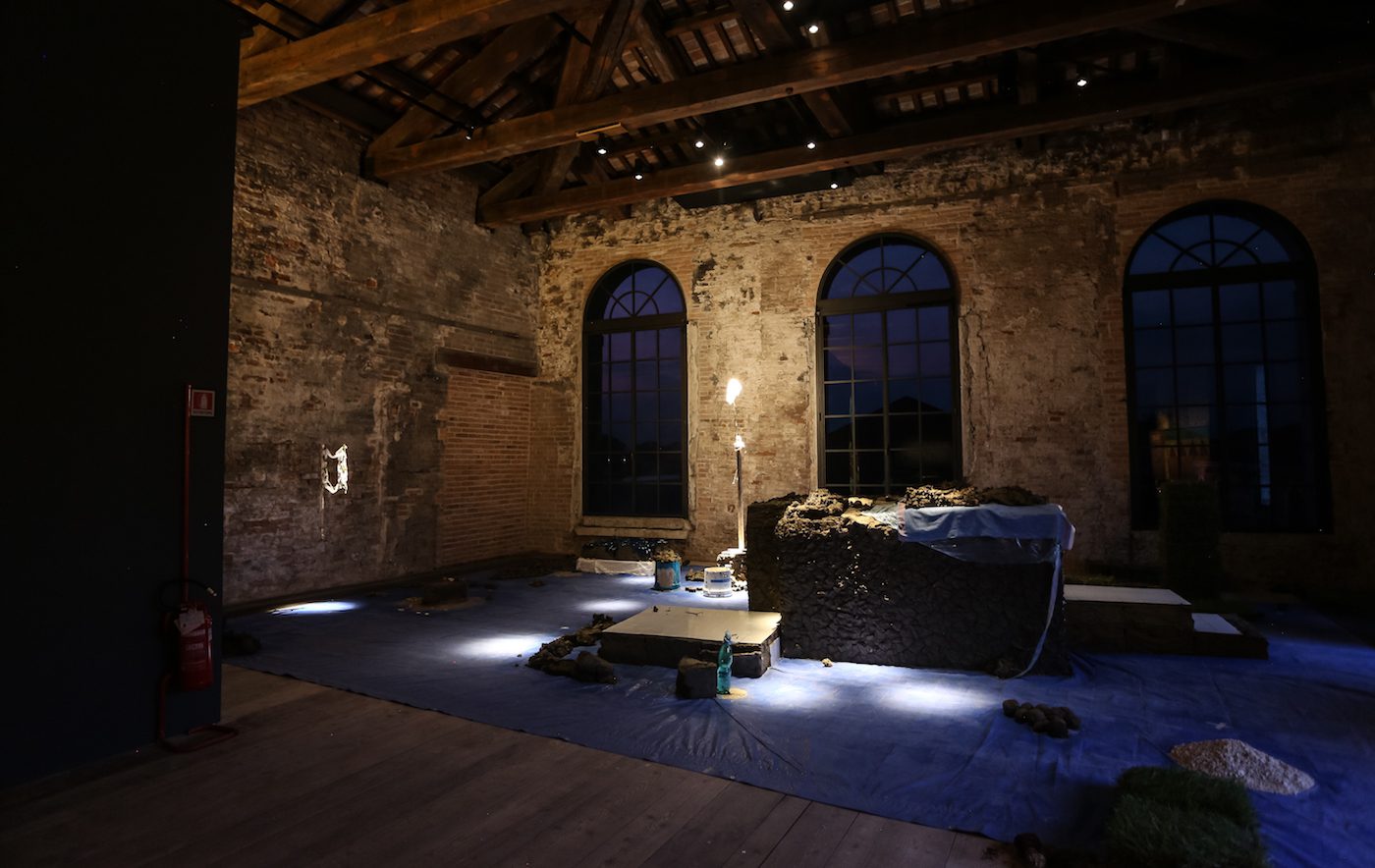 But the complexity of Mawande Ka Zenzile’s ambiguous cow dung and oil canvases, the stubborn and intentional untranslatability of Tracey Rose’s video work, and especially the poetics and locatedness of Dineo Seshee Bopape’s installations of wet clay and ritual objects, far exceed the texts. For all its intentions of “engaging with affective politics,” the curatorial aim – especially as communicated on the wall text – seems over-determined, as if it wants to direct viewers’ reading of the works, resulting in a strange disconnect between curators and artists. It’s a difficult thing – writing a curatorial statement without writing an actual statement: give too little and viewers are left lost and uninterested, write too much and viewers are perplexed by the divide between text and works.

Zimbabwe, meanwhile, reflects its economic realities in a modest yet consistently compelling pavilion, biennial after biennial. Curated by Raphael Chikukwa, the exhibition is particularly a showcase for the paintings of London-based Kudzanai-Violet Hwami and the remarkable textile works of Georgina Maxim. Cote d’Ivoire returns, in a commercial gallery in Castello, as does Mozambique and Egypt, and Madagascar brings its first pavilion to a space in the Arsenale with an elegant installation by Joël Andrianomearisoa.  Algeria is here for the first time too, despite the government withdrawing its funding a few weeks before the event. The artists Amina Zoubir, Rachida Azdaou, Hamza Bounoua, Mourad Krinah, and Oussama Tabti went ahead anyway with their exhibition “Time to Shine Bright” curated by Hellal Zoubir and supported by private funding. 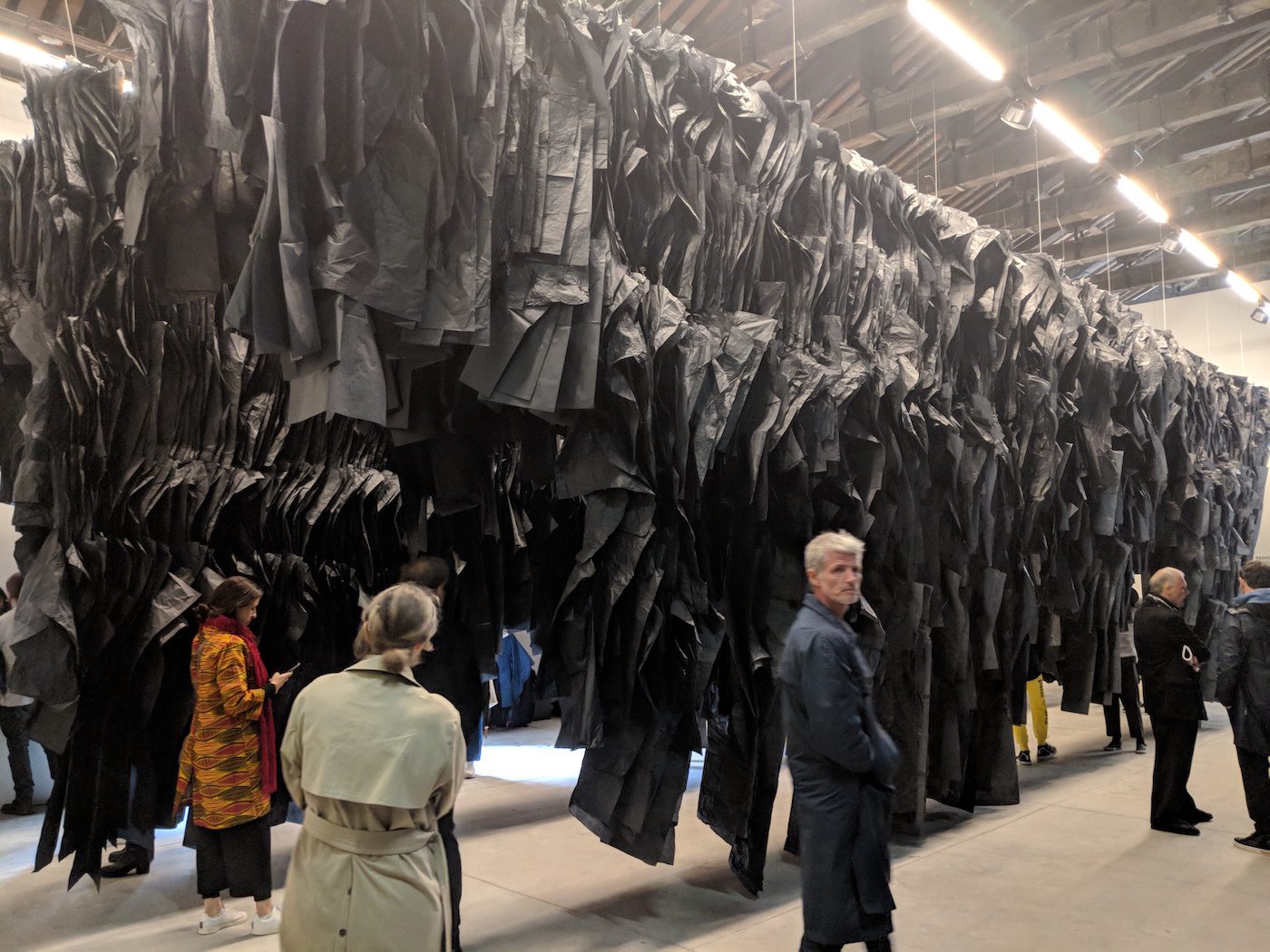 Joël Andrianomearisoa, I have forgotten the night, 2019. Photo: C&

But this is the sum of pavilions from Africa. Nigeria and Angola have not managed to return. The paucity is no doubt due to economic pressures and a lack of priority for the arts in national budgets, but it also reflects the reality of a continent where the arts are increasingly (and in some cases fortunately?) in the hands of private patronage, philanthropy, and diplomacy – MACAAL, the Sindika Dokolo Fondation, the Norval Foundation, Zeits MOCAA, Montresso Art Foundation, Raw Material Company, to name but a few such institutions. But more importantly, the lack of African pavilions gives substance to a much wider criticism regularly levelled at the biennial itself:  how accurate, how relevant, indeed how productive is the notion of national pavilions in a world where many people live transnationally, some by choice, but mostly not?

It is therefore not surprising that some of the most compelling works in biennial curator Ralph Rugoff’s central exhibition – beyond works that offer the spectacularized entertainment of giant, threatening squeegees or AI incarnations – engage exactly this notion of trans-situated, dislocated, divided selves, made whole or not through various departures, journeys, and homecomings: the portraits of Njideka Akunyili Crosby, the huge canvases of Michael Armitage, and the ocular insistence of Zanele Muholi’s huge if overfamiliar self-portraits speak of a world beyond the national, where identity matters differently – in ways that we are only now learning to recognize.