A Riot of Colour, Pattern and Repetition

In a climate where much of contemporary art is increasingly political, challenging, pedantic or even obscure, it’s not often that a contemporary art exhibition is described as “totally fun.” This was Time Out London’s verdict on Duro Olowu’s vast exhibition at Camden Arts Centre, entitled Making and Unmaking.

And it’s easy to see why. Olowu, a celebrated if eccentric British fashion designer of Nigerian and Jamaican descent with a boutique in Mason’s Yard and the sophisticated eye of a picky collector, has filled the galleries with a large collection of very interesting and wonderful aesthetic objects. The apparent point of departure is textiles, pattern and repetition, and these aesthetic concepts and design elements are explored via a range of photographs, paintings, sculptures, and objets d’ art. All are arranged in loose visual affiliations – a wall filled with linear designs faces a wall displaying various kinds of checked patterns; figurative canvases on a patterned wall are offset by patterned pieces on blank walls. 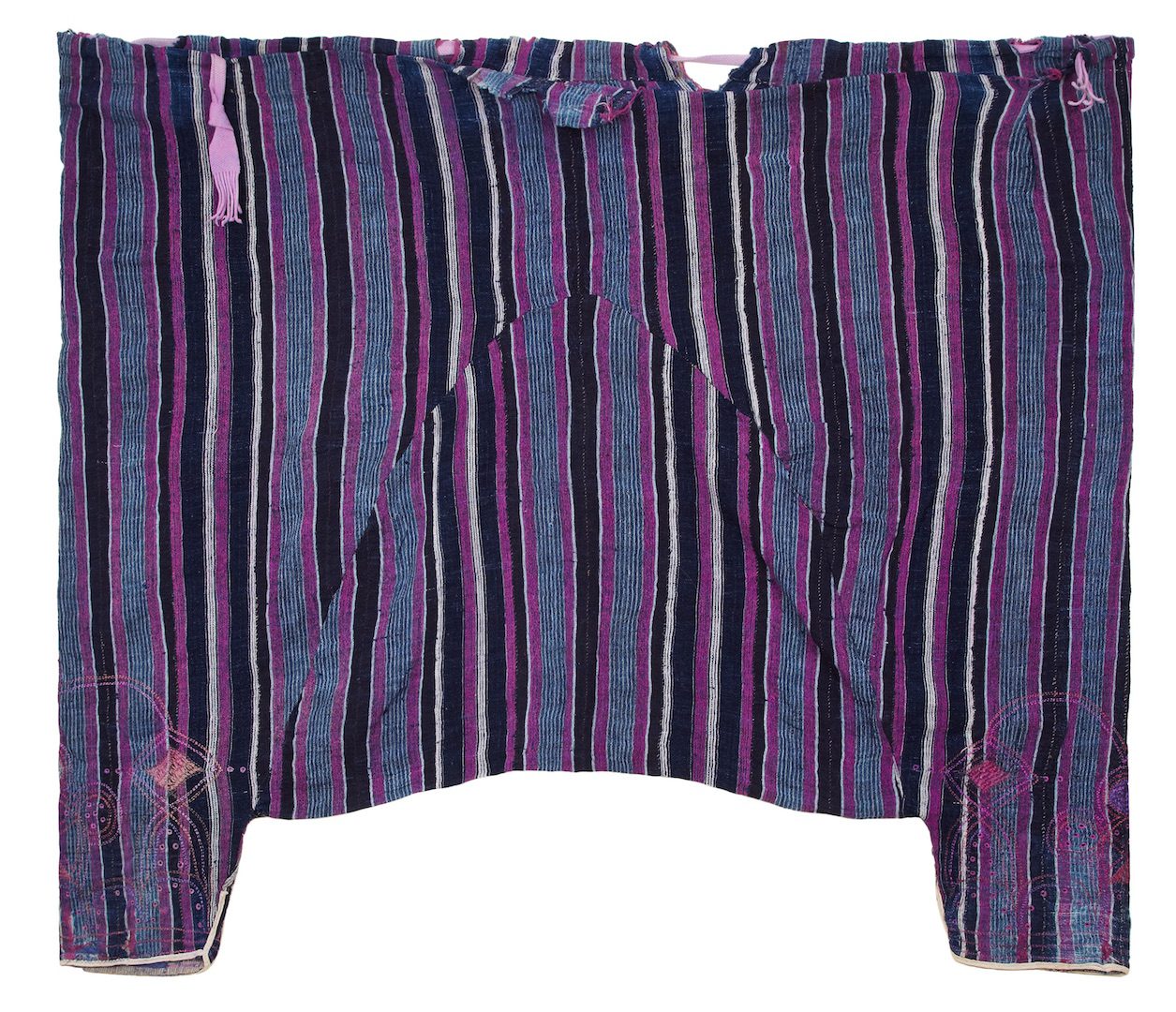 It is a treasure trove of discoveries, like stepping into the designer / curator’s mind. The only video work on display is a short film by fashion photographer Luis Monteiro featuring a model styled by Olowu in his own designs and accessories. It is a good place to start this exhibition because, clearly, Olowu’s unique design instinct –his signature riotous yet restrained color, his clashing yet coordinated patterns, his use of pattern upon pattern upon pattern – guides his curatorial eye. 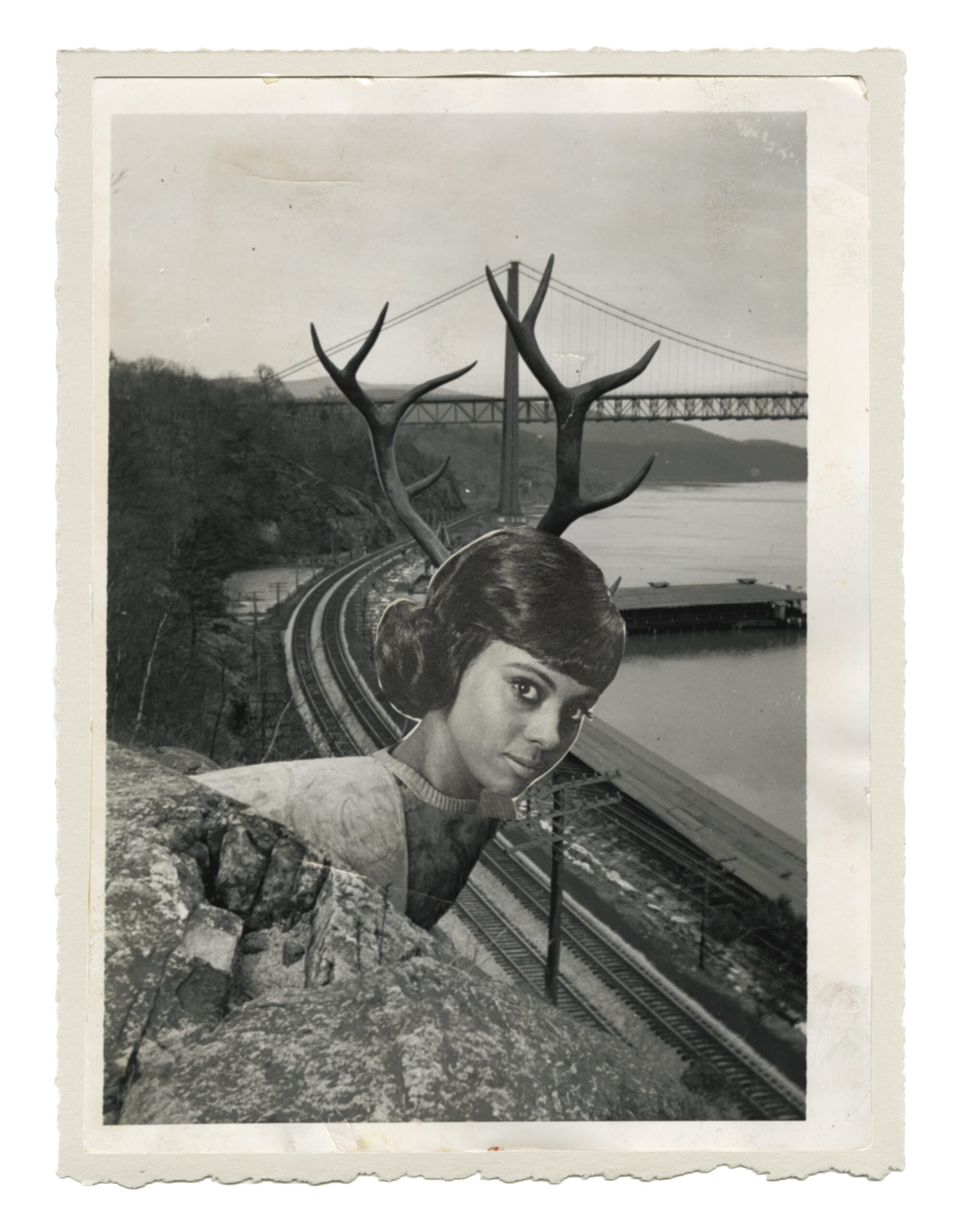 Of course this use of richly patterned textiles, juxtaposed with one another, is influenced by Olowu’s African roots, where colorful patterned wax-resist fabrics (ironically introduced to West Africa by the Dutch company Vlisco) still signify an immediate “Africanness.” Given this sensibility, it is no surprise to see so many African works in this show, ranging from hand-loomed 19th century Yoruba aso oke fabrics and garments to works by contemporary artists and photographers. 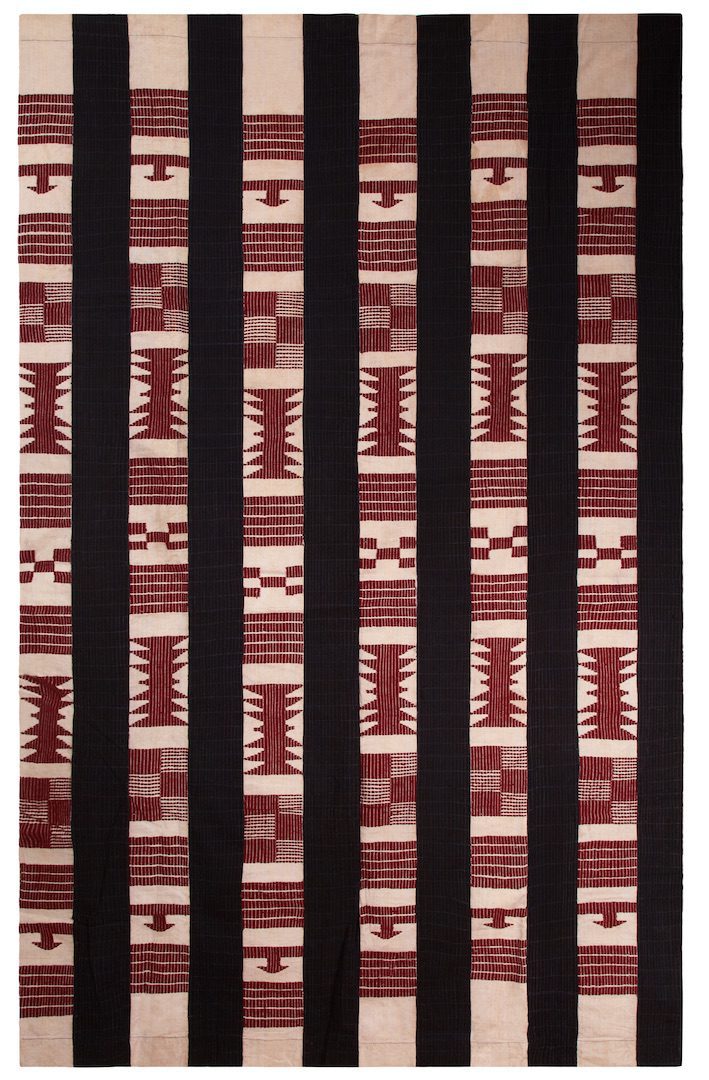 The use of pattern against pattern became the hallmark of photographers like Seydou Keïta and Malick Sidibé, whose black and white images erase color to emphasize pattern. While Olowu has included small images by Malick Sidibé from his Vue de Dos series (2002-2004), this trademark version of 20th century studio portraiture is updated in 2012 in the huge portraits of Beninese artist Leonce Raphael Agbodjelo, who photographs his “musclemen” against colorful fabric backdrops. Typically (and unconventionally for most art shows), Olowu does not display Agbodjelo’s pictures as a group –this is not an exhibition focusing on individual artists – but has interspersed four Agbodjelo’s between other works where they make sense visually. The eye is drawn from an Agbodjelo muscleman against a red Vlisco patterned background to a small Yinka Shonibare figure which hovers overhead, wearing red Vlisco-like pants. On a fabric-covered wall – perhaps the most striking in the whole exhibition – another muscleman is clustered among a number of painted portraits from various eras by artists as diverse as Lynette Yiadom-Boakye, Chris Ofili, Alice Neel, Meredith Frampton, and Hurvin Anderson. 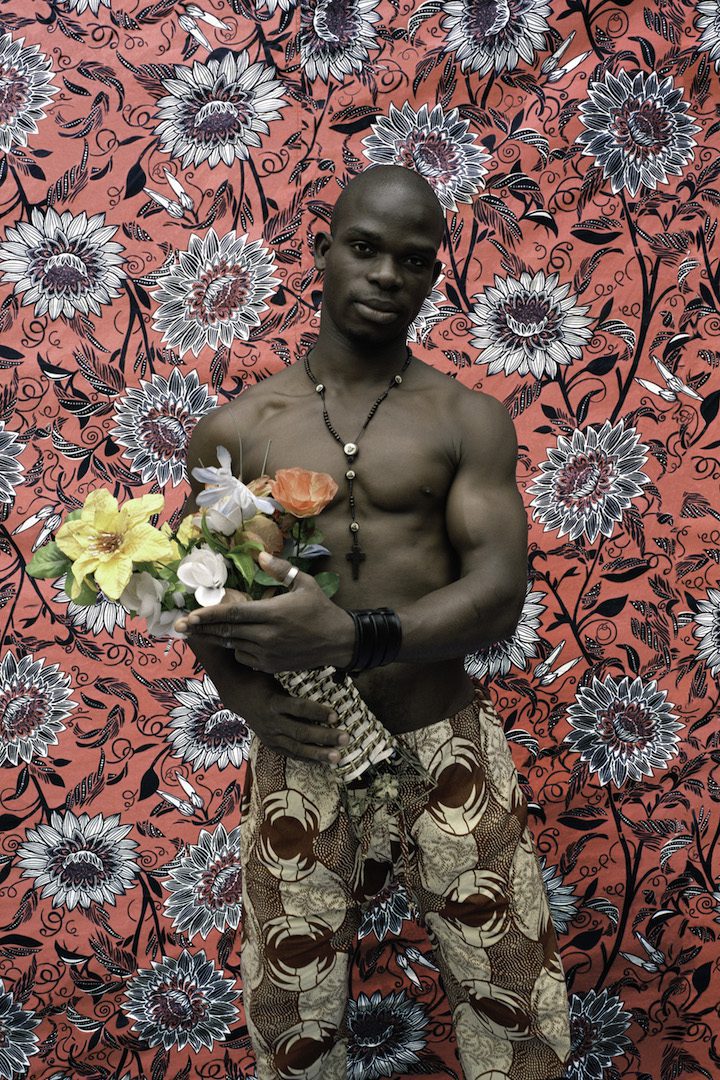 If this is sounding like an excess of color and pattern, don’t be put off if you consider yourself a modernist purist. Somehow Olowu manages to balance his “less is a bore” approach with a wide range of modernist gems – small intimate photographs of surrealist Claude Cahun (1894-1954), stylized fashion shots by Irving Penn,

rarely seen Bauhaus weavings and wall hangings in muted palettes by Anni Albers (1899-1994), where “less” is definitely and powerfully “more”. These works do not get lost nor are they overpowered when juxtaposed with vibrant photographs of South African Nokobhu Nqaba who uses iconic red, blue, and white Chinese carrier bags (known under many different names throughout the world, e.g. “Ghana-must-go bags” in much of Africa and “Zimbabwe bags” in South Africa) to explore notions of refugeedom and dislocation. Nqaba’s photos, often depicting the artist herself in an interior covered floor to ceiling in these bags in an almost abstract “all-over” style, hang on a wall covered with the same flattened bags, as if the photograph was uncontainable, spilling over the frame onto the walls. 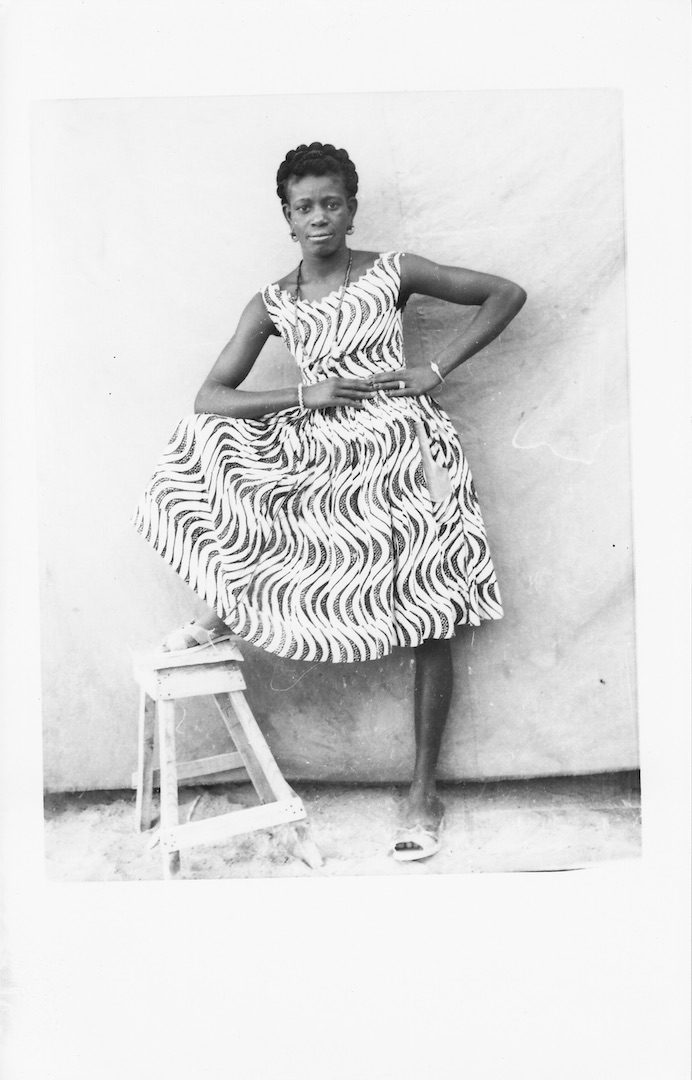 It is this sense of a richness that cannot be contained that defines this refreshing show. Olowu is keen to dispel the idea that this exhibition is “just” about textiles or only about fashion – the idea that it’s just fun, perhaps? He maintains that the exhibition is about “seeing an artist’s process”; that it is about the “making and unmaking” of art; that the emphasis on textiles is not a curatorial end in itself, but leads us to discover “the process of personal ritual experienced by artists in creating works.” I’m not sure that this comes across; the exhibition is filled with beautifully crafted and finished pieces and not much explanation or background is given about the “processes” that have given birth to these objects.

And is it “fun”? Yes, totally, but even more so if you are prepared to work a little; to look for relations between works and explore the many sub-themes around gender, body transformation, and the construction of identities that textiles make possible.

.
Liese Van Der Watt is a South African art writer based in London.