Nermin Durakovic, (Re)arranging shown at the Center for Art on Migration Politics (CAMP), Copenhagen, 2015. Courtesy of the artist
1/3
1/3 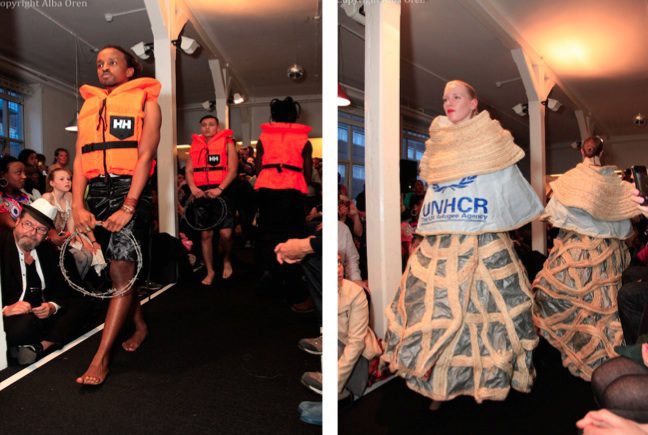 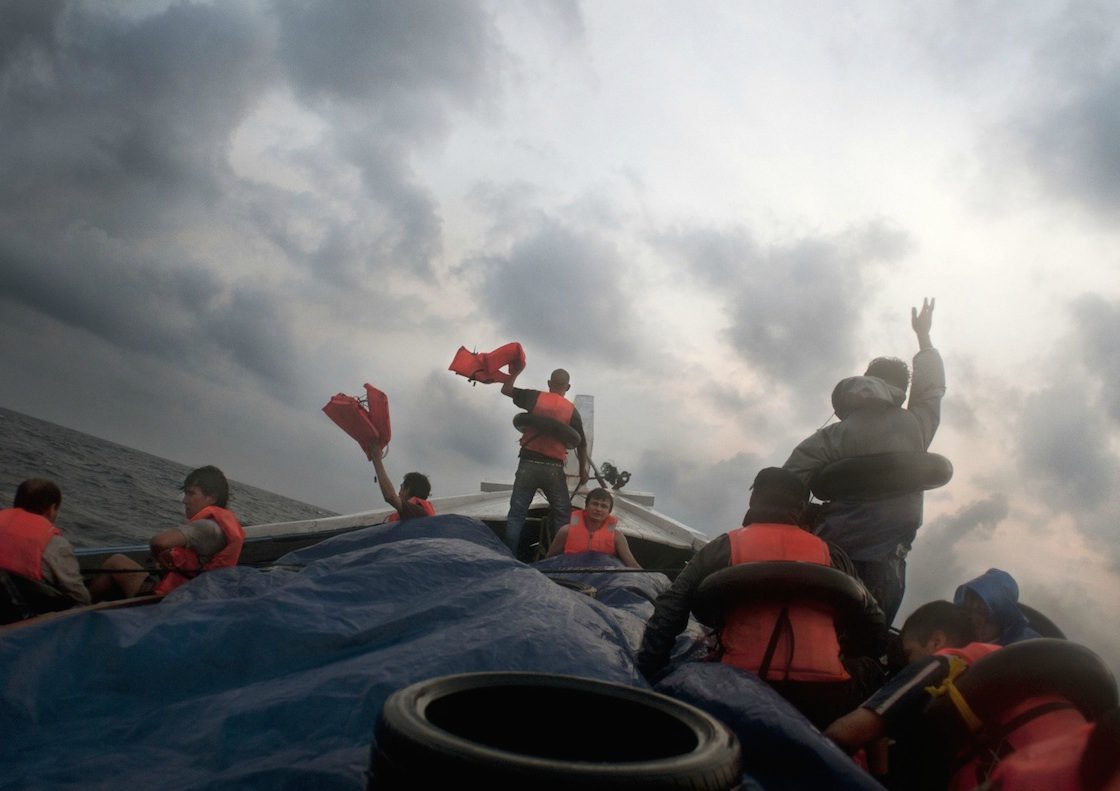 Barat Ali Batoor ’22 September, 2012, On the second day the boat is in trouble, taking on water - the passengers frantically wave their life jackets hoping to attract the attention of other boats.’ Courtesy of the artist
3/3
3/3

« Without words, they communicate what people must endure … »

The Center for Art on Migration Politics (Camp), a nonprofit exhibition space focusing on issues relating to asylum and migration, opened its doors in Copenhagen on 17 April. Clemens Bomsdorf talked to Tone Olaf Nielsen from the Danish curatorial duo

Nermin Durakovic, (Re)arranging shown at the Center for Art on Migration Politics (CAMP), Copenhagen, 2015. Courtesy of the artist

Clemens Bomsdorf: Your exhibition venue is called CAMP (Center for Art on Migration Politics) and displays art by refugees. At first, that smacks of political correctness or starry-eyed idealism. How do you intend for the center to contribute to the debate and to art in general?

Tone Olaf Nielsen: The artists that exhibit their work here (such as Barat Ali Batoor, Dady de Maximo, Nermin Durakovic, and Murtaza Ali Jafari) are all professional artists, many of them refugees. Of course they can deconstruct the subject matter from an entirely different angle. I believe that art can create change. Artists can investigate and reveal structural conditions. They can tell the visitors stories about their lives. That is especially critical, because language is often an obstacle. Many refugees hardly speak English, but we all understand visual forms of expression. Take the photographs of Barat Ali Batoor from Afghanistan, who applied for asylum in Australia. He documented his maritime escape in photographs. Without words, they communicate what people must endure during such an journey of escape, the tremendous risk they take of dying along the way.

CAMP is located inside the Trampoline House, a community center for refugees, asylum seekers, and other Copenhagen residents.  There are also people in the center who have traveled in boats like that and who tell their own stories after seeing the images. The photographs and the telling of such stories gives other visitors a sense of such journeys’ conditions. 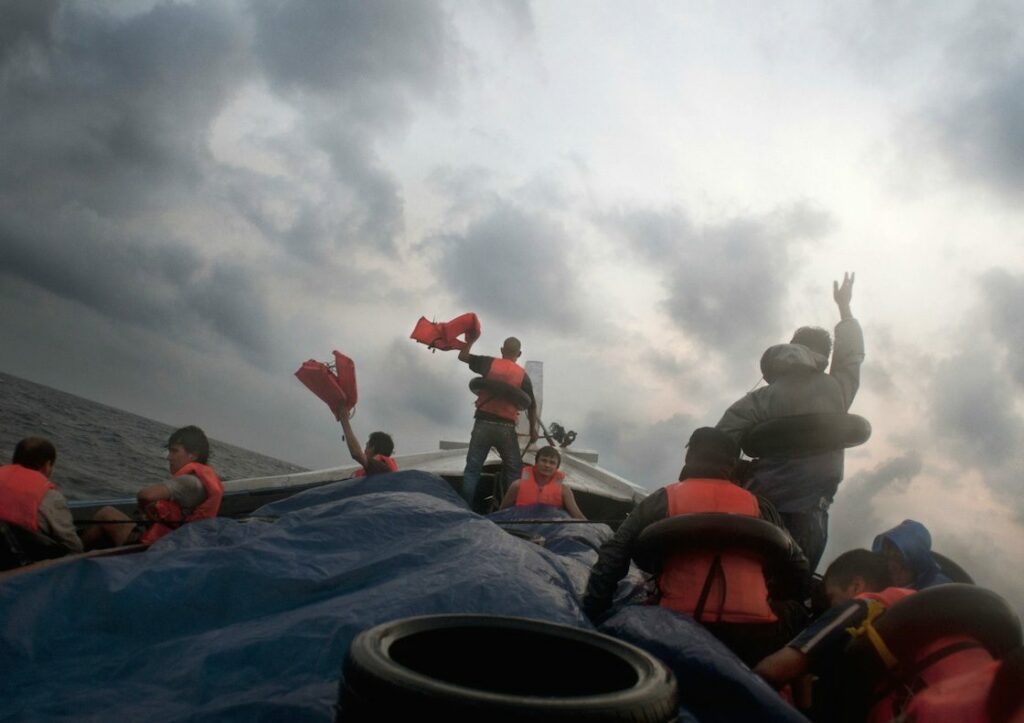 Barat Ali Batoor ’22 September, 2012, On the second day the boat is in trouble, taking on water – the passengers frantically wave their life jackets hoping to attract the attention of other boats.’ Courtesy of the artist

CB: Wouldn’t a conventional museum with a large number of visitors be a more suitable venue for an exhibition of that kind? After all, many of the people who venture here are already very well informed.

TON: In such a place, the visitors would only be able to engage in dialogue with the refugees’ art, but not with the refugees themselves. To get to the CAMP space, visitors have to pass through the Trampoline House, which is always hosting refugees. This facilitates dialogue with visitors, an opportunity that would hardly exist in a museum.

CB: You and co-curator Frederikke Hansen style yourselves as the curatorial duo Kuratorisk Aktion (curatorial action). What are your criteria for selecting artists?

TON: Our current and first exhibition is called Camp Life. The artists’ work deals with the conditions at various refugee camps and detentions centers. Nermin Durakovic, who came to Denmark from Bosnia in the 1990s, contributed a piece called “(Re)Arranging” that reconstructed a typical room at a home for asylum seekers like the ones he once shared. Visitors learn not only how little space they had, but also how creatively they used it. During the day, the cupboards were stacked sideways, repurposed as sofas or other items of furniture. Many people are clueless about the refugees’ and asylum seekers’ living conditions. We also selected art dealing with the path to Europe, the journey that precedes life in the camps. That includes the photo series by Batoor called The Unseen Road to Asylum, which I mentioned earlier.

That demonstrates the frailty of a human life. We can see how the people are squeezed into the cargo hold of a boat used for human trafficking. He also takes a critical view of the industry of people smugglers who earn money that way and are to blame if a boat is overloaded. We know that, tragically, many people die on the voyage, whether by suffocating, drowning, or otherwise.

CB: Perhaps the most striking piece is a fashion show performed at the opening. Just as Marco Evaristti once designed clothing for prisoners awaiting death sentences, Dady de Maximo created fashion for refugees. Was that a purely cynical way to attract attention?

TON: It’s true that his work helped raise awareness of CAMP, but von Maximo’s mixture of haute couture and political activism is not a cynical tactic, it’s another positive, both artistic and political, contribution. Much of the public can relate to a fashion show, which might not necessarily be the case with Nermin Durakovic’s work. A fashion show is a form that everyone understands. It was one of the most moving moments of my long career as a curator and art historian to see a procession of people walk slowly down the catwalk wearing life vests and holding barbed wire while refugees,  some of whom had made the voyage themselves, looked on. Another model wore clothing made of sacks used by the UN Refugee Agency (UNHCR). De Maximo’s performance piece If the Sea Could Talk was by no means sensationalism; it had nuance. De Maximo also incorporated more colorful clothing to signalize hope.

CB: So far you have mainly talked about male artists. Women are often in the minority of people fleeing to Europe. How is that reflected in art?

TON: The artists Nanna Katrine Hansen and Blake Shaw have created a guerilla radio program that is part of the exhibit. There, women from the Trampoline House report on camp life from women’s perspective. That includes women’s lack of safety in a male-dominated asylum center. Those are perspectives that are otherwise rarely brought to light.

CB: What else does your curatorial duo Kuratisk Aktion do?

TON: Over the past ten years, we have carried out interdisciplinary exhibition projects investigating topics such as racism and xenophobia in Nordic colonial history. We did the project called Rethinking Nordic Colonialism in Iceland, the Faroe Islands, Greenland, and Sápmi, that is, the former colonies of the North. Our point was to raise the idea that there was even colonialism in the north to begin with. Unlike in the United States, the United Kingdom, or France, here no one wanted to know about it and we are therefore lacking a post-colonial debate, which is what we hoped to ignite. The Road to Mental Decolonialization was about the idea that geographical withdrawal isn’t enough – there also needs to be a shift in mentality. The repression of the colonial past is one of the reasons the myth-shrouded northern European social democracies have such big problems with migration. And the traditional right-wing parties aren’t the only ones stirring up xenophobia to win votes.

The centre’s inaugural exhibition Camp Life: Artistic reflections on the politics of refugee and migrant detention is on view until June 14, 2015

Clemens Bomsdorf is a journalist and lives in Copenhagen, Denmark. Over the years Bomsdorf contributed to German and international media as art, Baublatt, The Art Newspaper, Il Giornale dell’Arte, Financial Times Deutschland, Focus and Die Welt.