Uninformed visitors who walk into Howardena Pindell’s first exhibition in Europe, at London’s Victoria Miro Gallery, might make wrong assumptions about the works on display. First, the viewer might assume the seven seven large “spray paintings” and six paper collages were made in the same period in the artist’s life, based on the neatness and precision of the color-feast in both sets of works, when in fact there is almost a forty-year gap between them. 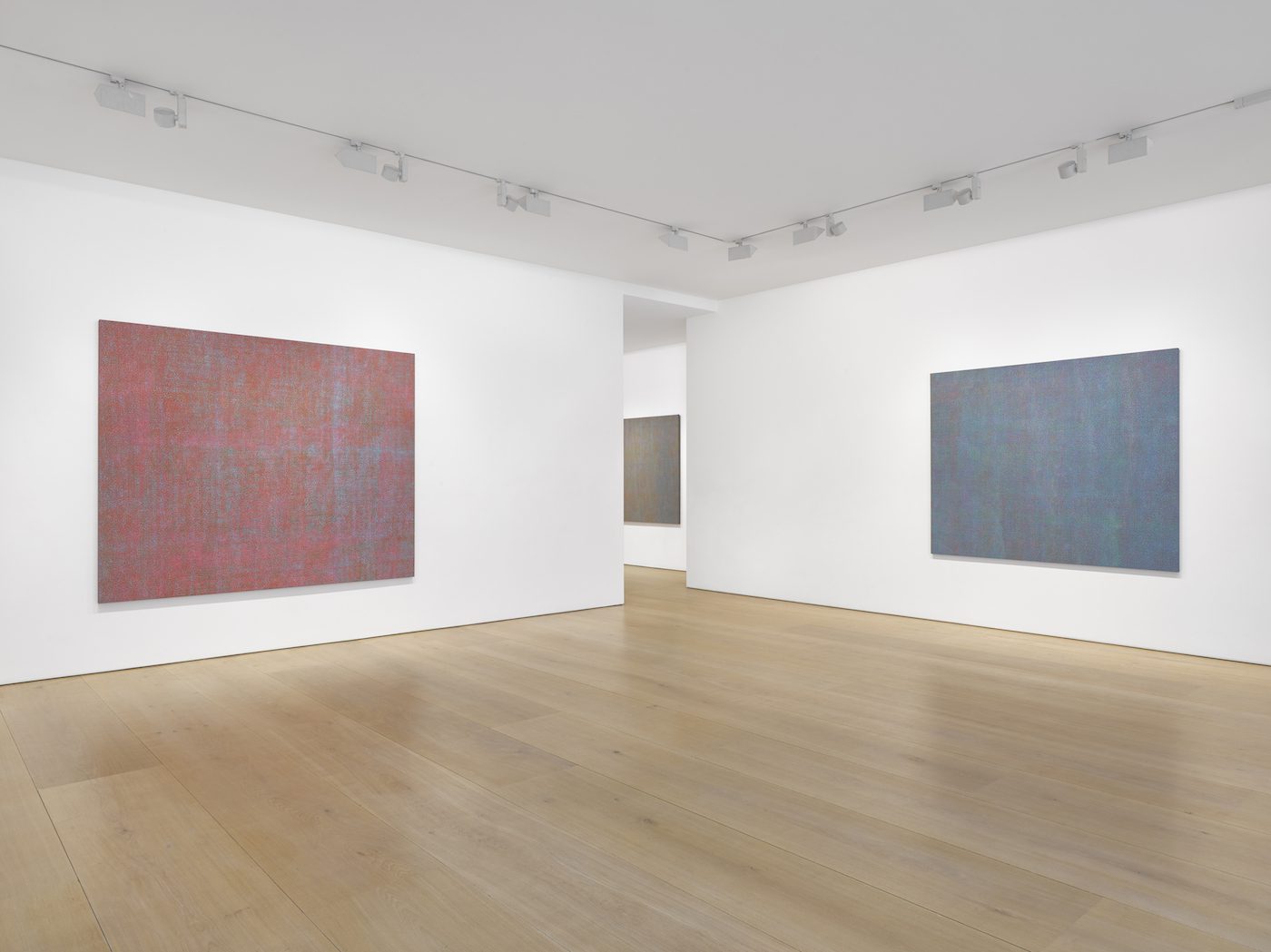 Now seventy-six, Pindell made the spray paintings in the early 1970s when she lived in New York, working on the curatorial staff of the Museum of Modern Art in the day and making art at night. The paintings occupy the two main rooms in Victoria Miro’s Mayfair gallery, while six of Pindell’s paper collages share space with the office and reception.

Pindell’s paper collages are works of complex beauty. Cutouts of cardboard paper, painted over with myriad colours, either jut out of a flat board (Untitled #7B and Untitled #6B), or are glued flat in layers (Untitled #55). The clustered imbalance of colorful paper circles – as if pickled in a clear liquid – bring to the works a geometric grace and the allure of a coral reef.

Out of the six exhibited in the gallery, two (Untitled #55 and Untitled #46) bare their construction when observed up close; square grids of metallic wire that support the assemblage. Take a few steps back and each work coheres and blooms. 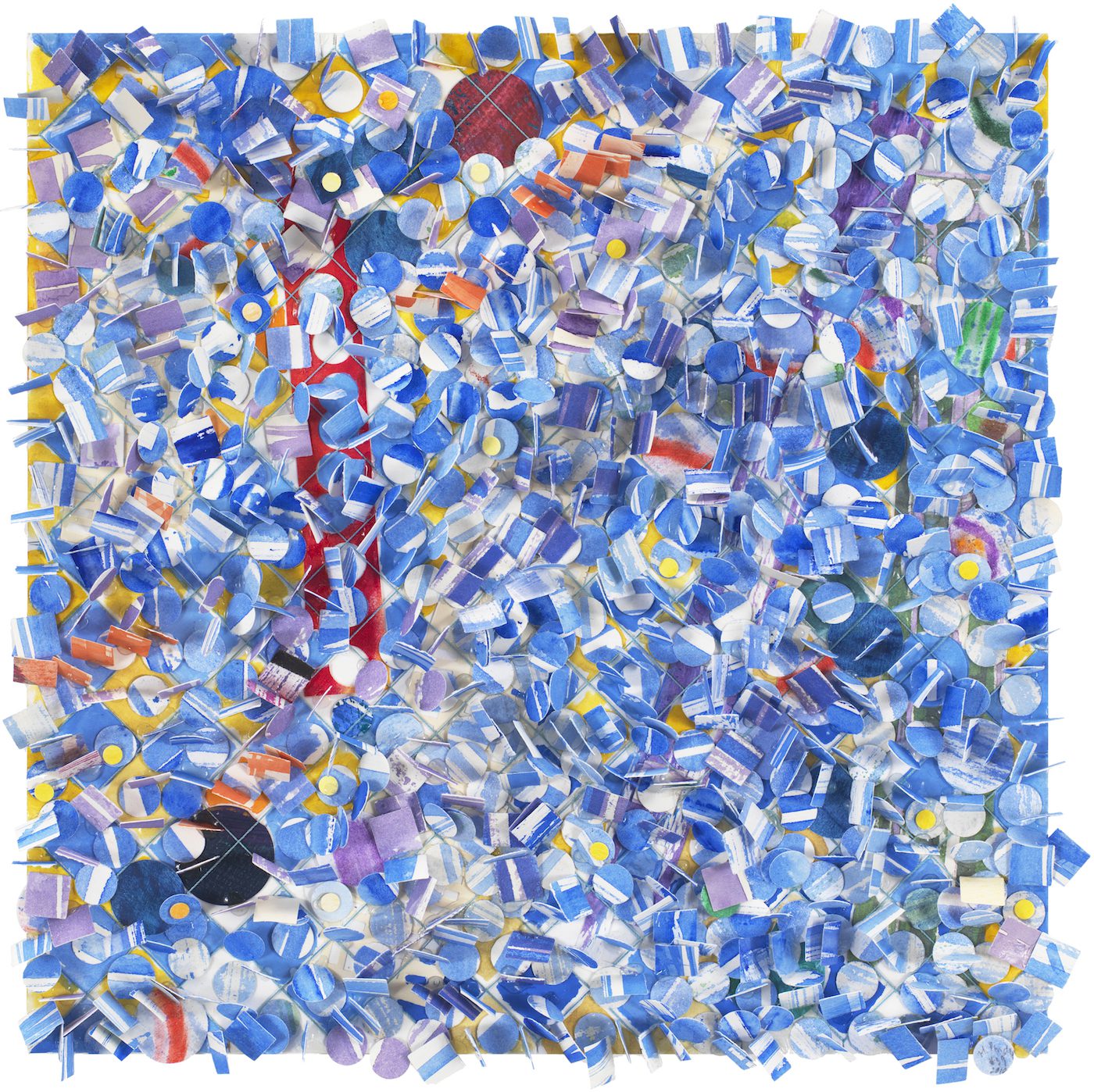 The connotations of a word like “bloom,” when used to describe works by a female artist, might make them seem effete. Pindell herself gave a corresponding example in a 2018 interview: She explained that the same color choice is described as “red and white” when made by a male artist, but called “pink” if made by a female artist.

Three of the paper collages on display exemplify Pindell’s obsession with circles, which she attributes to a fellow student while she was at university but also to a childhood trip with her mathematician father to a segregated Kentucky, in the south, during which root beer was served to them in cups circled in red, meant for only black people. Pindell points to other instances in her youth that seeded what have become signatures in her work; a gift of a microscope encouraged a fascination for the miniature, a Van Gogh reproduction in her childhood home gave her a feel for raised surfaces. More recently, a quest to trace her ancestral roots has inspired new works about a DNA test dating her lineage back 8000 years ago to what is present-day Uganda. 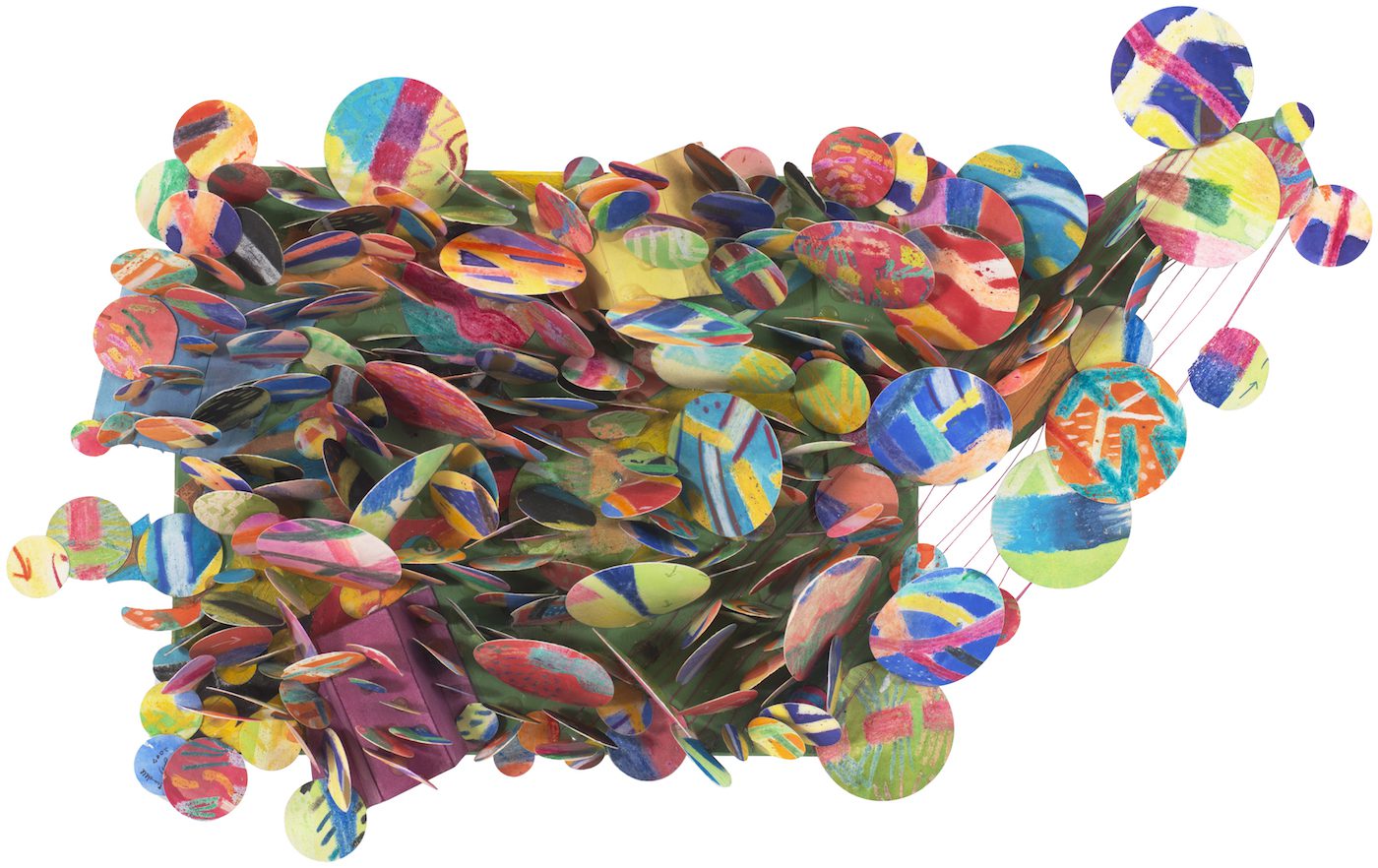 If visitors do not pick up the exhibition literature or look online at the wealth of interviews, reviews, and more, they might conclude that abstraction is Pindell’s most convincing language – based on the prioritized display of her large spray paintings and a disorienting absence of explanatory titles. Her development from figuration to abstraction was catalyzed by Joseph Albers’ color theory course while she was a student at Yale. Pindell continued to develop her own high understanding of colors as well as a peculiar manner of application which involved thinning down acrylic paint, filling an aerosol ca,n and spraying “layers and layers and layers” of it through a perforated panel on to unprimed canvas.

These spray paintings are not works of smooth perfection. Look closely and a drip of paint has caked here and a little stretch mark appears elsewhere. Neither are the dots sharp and pointed as one might expect if not up close. A visitor to her studio once asked the artist how many circles were in one of her paper collages, prompting her to count and number them. It is not said, anywhere online, if she has been asked how many dots are in a single spray painting, or what new information this could possibly reveal. 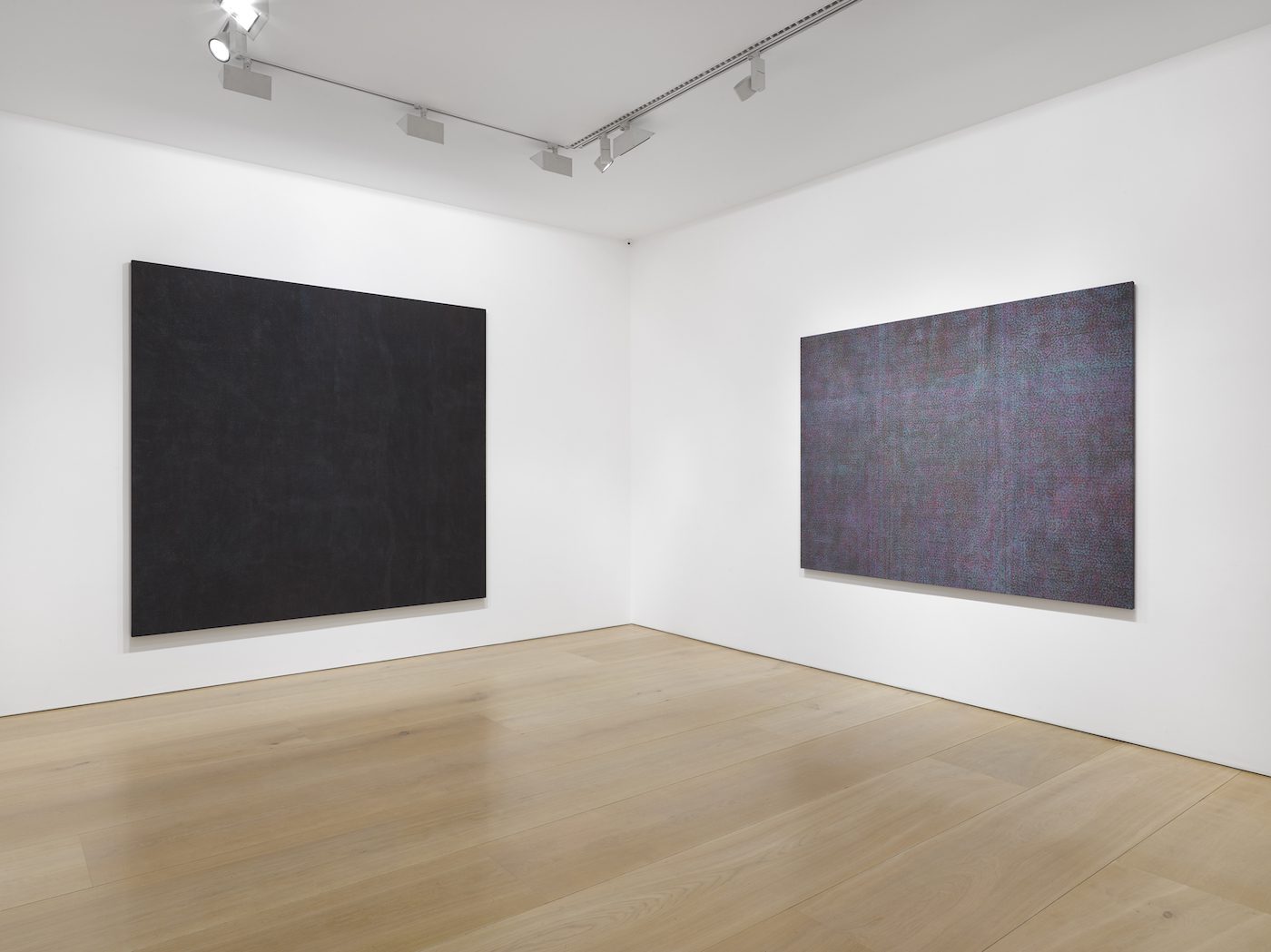 Uninformed viewers also might not think of Pindell as an activist artist. As a young curator and artist, she fought against the dispiriting racism of individuals and institutions in New York’s art world of the 1970s. There appears to be an upside to it: “the racism at the museum is what helped me with my art practice because I got left out of a lot of things,” said the artist in another interview. Career advancement would have to depend solely on her work, and while she has had numerous solo and group exhibitions over the last four decades, interest in it has spiked in recent years. Pindell is in a bracket of older African American artists, over seventy, who have found fame and small fortunes in recent years – including Frank Bowling, Melvin Edwards, Lorraine O’Grady, and Barbara Chase-Riboud. Next year, a major exhibition of her work will go on show in a joint production by Fruitmarket Gallery in Edinburgh and Kettle’s Yard in Cambridge.

Even an informed visitor might not think of the phrase “genius artist” when looking at Pindell’s works in Victoria Miro gallery. Its association with male artists is yet to be broken even in these “woke” times.

Howardena Pindell is on view at Victoria Miro until 27 July 2019.

Born in Philadelphia in 1943, Howardena Pindell studied painting at Boston University and Yale University. After graduating, she accepted a job in the Department of Prints and Illustrated Books at the Museum of Modern Art, where she remained for 12 years (1967–1979). In 1979, she began teaching at the State University of New York, Stony Brook, where she remains a full professor.