In Conversation with Oyinkansola Dada

POLARTICS Is the Gallery Creating Art Ecosystems in Africa

Initiated as a publication that merged politics and art, POLATRICS has evolved into an online platform aimed at nurturing young African artistic talent from production to collecting. Some of their activities include three pop exhibitions a year with an emphasis on bringing together artists and collectors from the continent. C&’s Obidike Okafor speaks to the founder Oyinkansola Dada on the importance of creating art ecosystems in Africa.

Art on the wall by Anedu Edozie From left: Savings, Old Money, Polaroid I & Polaroid II, 2019.

Contemporary And: How did POLARTICS start?

Oyinkansola Dada: POLARTICS was started in 2015 as a blog for African culture and politics in its different facets. It was centered on engaging a younger audience and over the years has evolved into an online art gallery, with occasional pop-up exhibitions.

OD: POLARTICS is a portmanteau of the words “politics” and “art”. My vision was to create a publication that could engage with both concepts on a critical level and occasionally create a connection between the two, especially within the sphere of political art. I wanted to create a knowledge base where young people could appreciate the aesthetics of African culture whilst also staying politically engaged. As POLARTICS evolved into an art gallery, I thought the name was still relevant, since the kind of art that we choose to curate is inherently political. A lot of the artists we work with center identity and youth and won’t hesitate to speak truth to power. 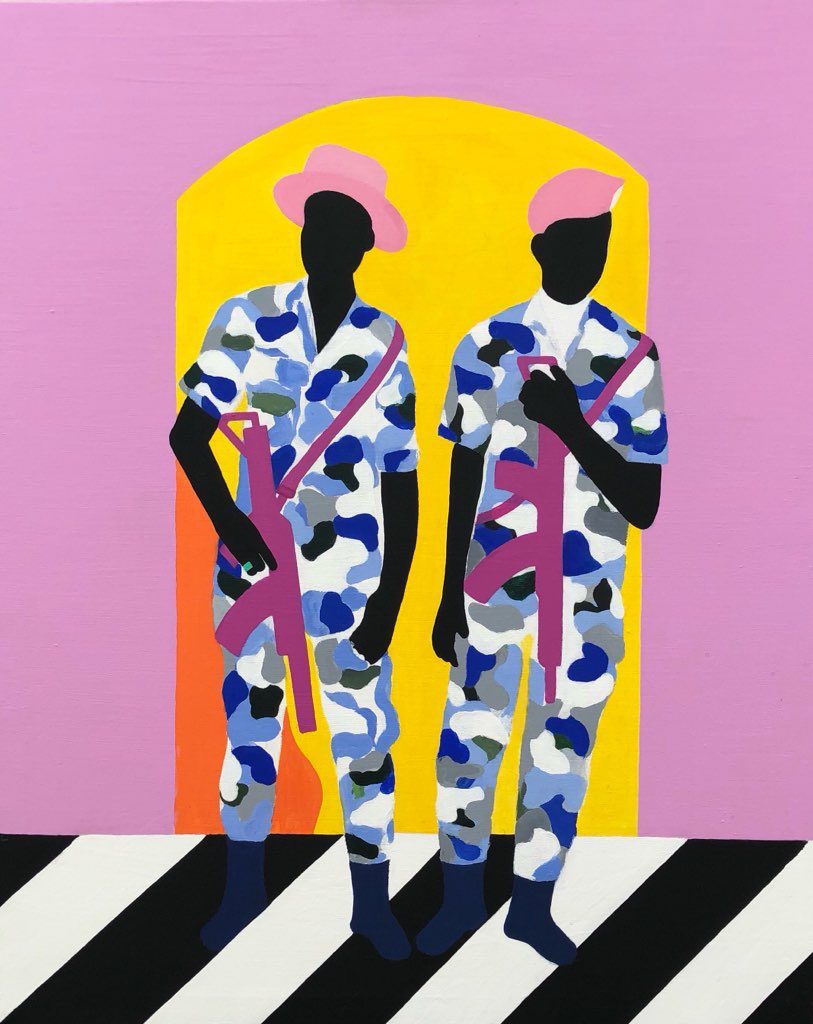 Abe Ogunlende, You Look Nicer in Pink, 2019. Courtesy the artist.

C&: What is your background in the arts?

OD: I haven’t studied art formally. I studied International Politics and am currently finishing a law degree. I’ve always been an art enthusiast and I spend a lot of time on independent art study. I’m also constantly putting ideas and concepts into practice. There’s been a lot of learning as I go.

C&: What is your goal professionally?

OD: Positioning POLARTICS firmly within the art world as a gallery that represents exceptional emerging talent from the continent — one that isn’t your stereotypical brick-and-mortar gallery and is more experimental in its approach to curating and representing young and diverse voices. At the core of POLARTICS has always been the need to elevate the voices of young artists and create a space where they feel confident enough to explore the bounds of their creativity. There is also a need, not only to create a space for these artists, but to also inspire younger Africans to collect. The art world is known for its opacity and inaccessibility and I believe a lot of new collectors need a degree of hand holding to fully come into their own.

C&: Tell us about the different channels that POLARTICS uses to promote art?

OD: POLARTICS exists primarily online with Instagram and email marketing being the main focus. We currently hold three exhibitions a year, but we’re looking to increase the numbers and explore curating in different cities. So expect to see more exhibitions, collaborations, initiatives and find us at a major art fair, very soon! (Coronavirus willing).

OD: Although young people aren’t the only collectors we want to work with, they hold a special place because of their importance to the ecosystem. A lot of the works being created by the artists we work with engage with themes that are relevant to African millennials, and I think it’s important that a great proportion of these works end up in their hands.

It’s art created by them, for them. So much of our culture is so readily exported to spaces where their significance and aesthetic value are somewhat appreciated, but never really fully understood. This isn’t a personal shortcoming, really, it’s more about the gap between the artist and the collector and it takes intentionality to bridge it.

There’s also an element of cultural preservation here. We don’t want a situation where most of the art is collected by a disconnected audience. Young people should take active steps to collect or at least engage where they can. 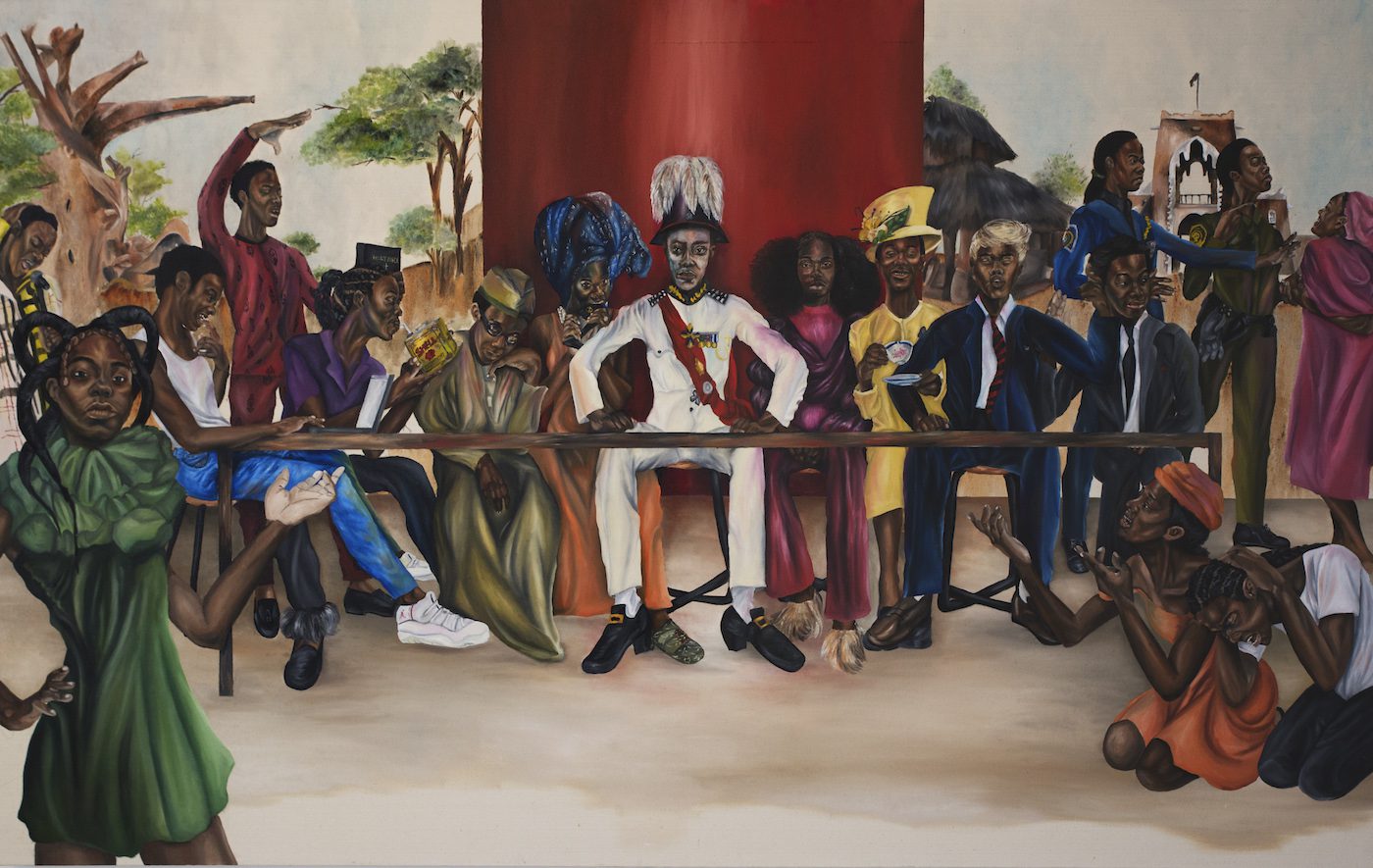 OD: By increasing their visibility, connecting them to art enthusiasts, and investing in their artistic growth. We’re currently in the process of designing a program that helps our artists experiment more in their practice, through giving them the resources they need to create and sustain themselves.

This way they don’t need to worry about the commercial viability of their works. Of course funding is a challenge, but the work needs to be done to nurture different forms of artistic expression. Beyond traditional media, space needs to be made for modern ideas in its different forms. I believe art should be a reflection of the times, and as several other art forms innovate, so should the visual arts.

C&: Why does it make sense to have pop-up galleries in Lagos?

OD: From a business perspective it makes sense because of the high overheads of keeping a physical space running. As a gallery still in its inception stages, funding is a major issue and at the moment it’s simply impractical to spend so much on a permanent space. Having pop-ups in Lagos gives us the space to think outside the box and be creative, which I think is actually great. It also makes things more dynamic, as different spaces present new curatorial challenges and this is always fun to explore.

C&: How is POLARTICS helping to push the narrative of contemporary art from Africa to the world?

OD: This narrative often neglects the need for a pan-African approach to the consumption and preservation of culture. There often seems to be a need to measure impact via the validation of Western media and audiences. My vision is to place the highest value on nurturing connections within Africa — our culture isn’t a commodity that needs to be exported to find its worth. Its worth, its value, its merit, it’s all here. It can only be enjoyed cross-culturally and only from a place of respect. So, I think we need to reframe our perspective a little, actually maybe a lot.

C&: Where do you hope to see POLARTICS in the next five years?

OD: I hope that POLARTICS is respected for putting the growth of its artists first and presenting ideas that shift people’s thinking of visual art and its role in our society, beyond any limitations. I hope through this we can ignite some really interesting, much needed conversations. I also hope that we can galvanize the next generation of African collectors.

To find out more, visit polartics.com