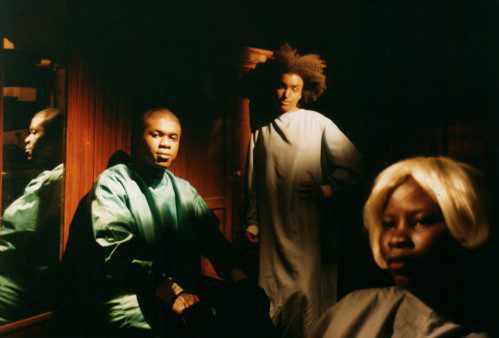 The Shadows Took Shape is an interdisciplinary exhibition exploring contemporary art through the lens of Afrofuturist aesthetics. Coined in 1994 by writer Mark Dery in his essay “Black to the Future,” the term “Afrofuturism” refers to a creative and intellectual genre that emerged as a strategy to explore science fiction, fantasy, magical realism and pan-Africanism. With roots in the avant-garde musical stylings of sonic innovator Sun Ra (born Herman Poole Blount, 1914–1993), Afrofuturism has been used by artists, writers and theorists as a way to prophesize the future, redefine the present and reconceptualize the past.

The Shadows Took Shape will be one of the few major museum exhibitions to explore the ways in which this form of creative expression has been adopted internationally and highlight the range of work made over the past twenty-five years.

The exhibition draws its title from an obscure Sun Ra poem and a posthumously released series of recordings. Providing an apt metaphor for the long shadow cast by Sun Ra and others, the exhibition will feature more than sixty works of art, including ten new commissions, charting the evolution of Afrofuturist tendencies by an international selection of established and emerging practitioners. These works span not only personal themes of identity and self-determination in the African-American community, but also persistent concerns of techno-culture, geographies, utopias and dystopias, as well as universal preoccupations with time and space.

A panel discussion featuring Naima J. Keith and Zoe Whitley, co-curators of The Shadows Took Shape, Alondra Nelson, Professor of Sociology and Gender Studies at Columbia University and Paul D. Miller as they trace the origins of current conversations around Afrofuturism, from the early speculative fiction to the computer monitor then college courses and beyond.

In collaboration with the Columbia University and The Studio Museum in Harlem, these programs examine Afro-futurist aesthetics within the larger social, political, and cultural context of the African Diaspora.

Poet, performer and musician Saul Williams and artist and faculty member Sanford Biggers explore the sonic, visual and textual in their practices in the context of Afro-futurist aesthetics.

Saul Williams is one of the most celebrated and globally recognized American poets living today. After the release of his internationally acclaimed film, Slam  (Sundance’s Grand Jury Prize and the Cannes Camera D’Or-1998), which he co-wrote and starred in, he has been the figure-head of the Slam Poetry movement and has been asked to read and perform his poetry in over 30 countries and more than 300 universities in the U.S. alone.

Sanford Biggers, whose work is shown in The Shadows Took Shape, creates artworks that integrate film, video, installation, sculpture, drawing, original music and performance. He intentionally complicates issues such as hip hop, Buddhism, politics, identity and art history in order to offer new perspectives and associations for established symbols. Through a multi-disciplinary formal process and a syncretic creative approach he makes works that are as aesthetically pleasing as they are conceptual.

The Stuart Hall Project, a film about the father of cultural studies and social theorist, Stuart Hall, is a stunning record of the massive social and political convulsions of post-colonial Britain. Produced entirely from footage of Hall on British television and radio (alongside archival footage, images from his trips to Jamaica, and the music of Miles Davis), the film offers a moving account of exile, racism, hybridity, violence, and radical struggle—all of which has been the experience of New World black and South Asian émigrés since mid-century. The screening is followed by a discussion with the director John Akomfrah, exhibition co-curator Naima Keith and scholar Rich Blint.

John Akomfrah, OBE, was a co-founder of the important London-based film body, The Black Audio Film Collective, and now helms Smoking Dog Productions. In partnership with long-time collaborator, Lina Gopaul, Akomfrah has received more than thirty international awards and scores of official film festival selections. Akomfrah’s other films include: The March, The Nine Muses, Oil Spill: The Exxon Valdez Disaster, Handsworth Songs, and Seven Songs for Malcolm X, among others.