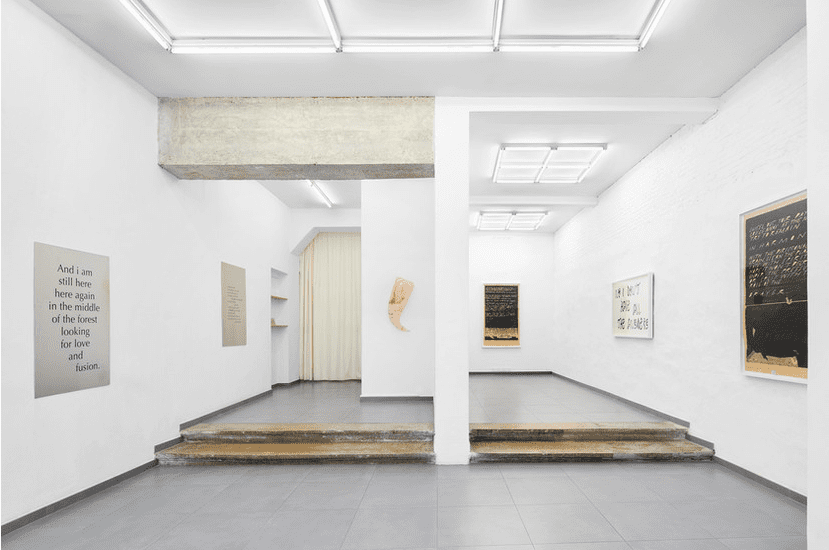 ‘A, letter‘ brings together the work of French artist Tarek Lakhrissi and British-Bermudian artist Charlie Godet Thomas, both of whom explore poetry and make use of the grey areas between writing and visual art.

The exhibition focuses on the notion of correspondence, that of the two artists, but also between the work and the audience. In preparing for the exhibition, Lakhrissi and Thomas explored the mutual ground they occupy through both fast and slow technologies. Working in separate continents – Lakhrissi in Europe and Thomas in North America – the artists were unable to meet in person; this space became their focus. ‘A, letter’ is a conversation that holds some of the distortions inherent in not being able to communicate in person; the inevitable distortions of miscommunication, paired with new and unexpected ideas that can blossom from distance.

Both artists write poetry which is incorporated into their work alongside sourced text. This combination of sources creates a poly-vocal exhibition which can be read like a cut up, non-linear text, containing an aesthetic claim for the way texts are presented and therefore communicated visually.

Lakhrissi’s aluminium tablets ‘As a Part of Survival…’, ‘Fusion’, ‘Whisper Secrets’ and ‘Trahi trahi’ were commissioned within a larger series for the artist’s first institutional solo show in the UK ‘My Immortal’ at MOSTYN, Llandudno, UK, earlier in 2021. These works are reflective metal plaques inscribed with poems written by the artist about desire, loss and personal mythologies, becoming commemorations for different members of his close community. The text is UV printed onto the aluminium surface, a process that uses ultraviolet lights to dry or cure ink as it is printed.

Lakhrissi gives space to poetry as an artistic statement through diverse mediums. His profound use of language is evident in the tablets, reflecting on queer past, present and futures to become mediations on the ephemerality and fragility of communal love, friendship and the power of intimacy.

Accompanying these works, are resin sculptures that embody the shape, colour and texture of the body organ associated with speech and digestion; the tongue. The series takes cue from poète maudit Justin Chin’s writings, which describe a tongue-in-action not assisting violence, but instead gesturing towards a field of potentiality. In a text about the work, writer Edwin Nasr has likened this work and body part to a jellyfish describing the « gooey oceanic species that brush against you and release painful stingers when they care and desire, as any loving stranger with a Mars in Scorpio would ». The work on paper ‘Serpent Dream’ continues this animalistic enquiry in the form of a large scale screen-print on hard paper, which is exhibited for the first time since being produced in 2019. The minimal monochrome print reads ‘NO I DON’T HAVE ALL THE ANSWERS’ in a unique wavy font created by Valentin Bigel, inspired by the shapes of snakes. The text is a quote from French writer and philosopher Édouard Glissant and expresses a right of opacity. Based on a real altercation in a Parisian suburban train with police officers, the ‘Serpent Dream’ project, which this work is derived from, is a way to find new ways of expressing forms of sadness and reverie in relation to structural social violence.

Thomas’ three new works in the exhibition were produced over 2021 in Mexico City. His two large paintings on paper, ‘Enjoy Your Visit’ and ‘Stop by Again Soon’ derive from a set of short biographical poems which were changed from the first person in order to bridge the gap between the writer, the audience and the experiences and ideas expressed. Both works explore various struggles with worsening mental health.

‘Enjoy Your Visit’ includes a metaphor of printmaking to allude to pressure and the resulting psychological and physical fragmentation it can cause. This fragmentation is portrayed by the artist’s pencil marginalia at the bottom of the work which refers to one of the most famous fragmented paintings ‘The Execution of Maximilian’ (1867) by Édouard Manet, and might be seen as a hand reaching from Thomas, in Mexico, to Lakhrissi, in France – Maximilian was installed as emperor of Mexico in a European-style monarchy backed by Napoleon III of France. ‘Stop by Again Soon’ explores the use of alcohol by those seeking to control anxiety or other disorders through self-medication. The work is informed in part by the tragic personal histories of writers such as John Berryman (who’s presence is consistent in Thomas’ past work), as well as figures such as Carson McCullers, Elizabeth Bishop and Dylan Thomas. The work might be seen as a lament for those who succumbed to addiction and a call to arms for those who are still here fighting. In both works, Thomas inverts the negative space so important in poetry, instead carving the letters out from the blank page, overwhelming the reader instead with the “black cloud” of his inverted image and text.
Thomas’ third work ‘Fix’ is a smaller version of previous works in which the artist casts paper and card fragments from earlier works, notes and sketches. He sees these as discarded letters, words or sentences that can later resonate in a different context, which are kept in boxes according to approximate size as a jumbled existing vocabulary he can take from. The use of fragments and offcuts is an extension of the artist’s desire to focus on subjects which might otherwise be seen as peripheral or not of value, and a testament to his belief that often, when we are trying to focus on one thing, more interesting subjects can arise in the margins during the process, and that these deserve our attention. The offcuts are the material manifestation of that process, belief and method.

Both artist’s have collaboratively produced a vinyl artwork mounted on the window at the front of the gallery space. The image that they have developed is purposefully ambiguous; it could depict someone reading a letter or someone passing a communication to another person. At the opening Lakhrissi reads a letter that Thomas has written and sent to him as a performative act between the two artists, rethinking the link or pact between them.

‘A, letter’ is a satellite exhibition organised and curated by VITRINE. Ballon Rouge Collective will have an exhibition at VITRINE, Basel in 2022.