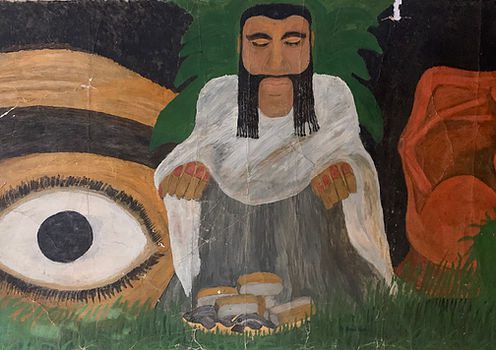 Sane Wadu was born in Nyathuna in 1954, developing an artistic practice and career spanning four decades. As one of the founding members of the Ngecha Artists Association, a group of self-taught artists, together with his individual teaching and artistic practices, Wadu is one of the most important living contemporary artists in the region.

He started painting in 1984, having explored multiple careers. Wadu worked first as an educator, then worked as a court clerk. In his search for self-expression, he later transitioned into cultural production as a writer, playwright and theatre actor but “came to realise these things will not give a way to express [himself] the way [he] wanted to”.

As a result of abandoning conventional employment for the less-certain calling of being an artist, his peers labelled him “insane”. Wadu made the radical choice to rename himself, christening himself “Sane”; a deeply subversive act in response to his critics and in defiance of the madness they had ascribed to him. The clarity and lucidity of his conviction and willingness to defy societal expectations remains ever present in his practice.

A renegade artist in pursuit of the impossible, Wadu’s ability to remake himself and his world anew suffuses his work with a rebellious electricity. Subversion runs through his practice, shaping his choice of critical subjects and the language in which he paints. Renouncing the academic aspects of painting and conventional expectations of coherence, the artist deliberately includes textual elements rendered backwards and creates double-sided works. At times, Wadu incorrectly signs work as subtle acts of subversion that constantly question the status quo. Unbound by these expectations, “the self-taught artist remains unique, free to express himself with an intensity entirely his own.”

I Hope So is an overview of the artist’s oeuvre, showing drawings, paintings and prints. The retrospective unearths decades of Wadu’s acute observations and his painterly reflections on questions of religion, spirituality, gender, and politics within Kenyan society.

Inspired by change and the latent possibilities that emerge in the everyday, Wadu is himself a traveller (or msafiri) on a journey. As an observer and listener, the artist’s paintings, though critical in nature, are works made in consideration of an imminent future in which there is optimism for something better. Wadu continues to propel himself and takes us along with him on this journey of hope of an individual, of a people, and of a nation.