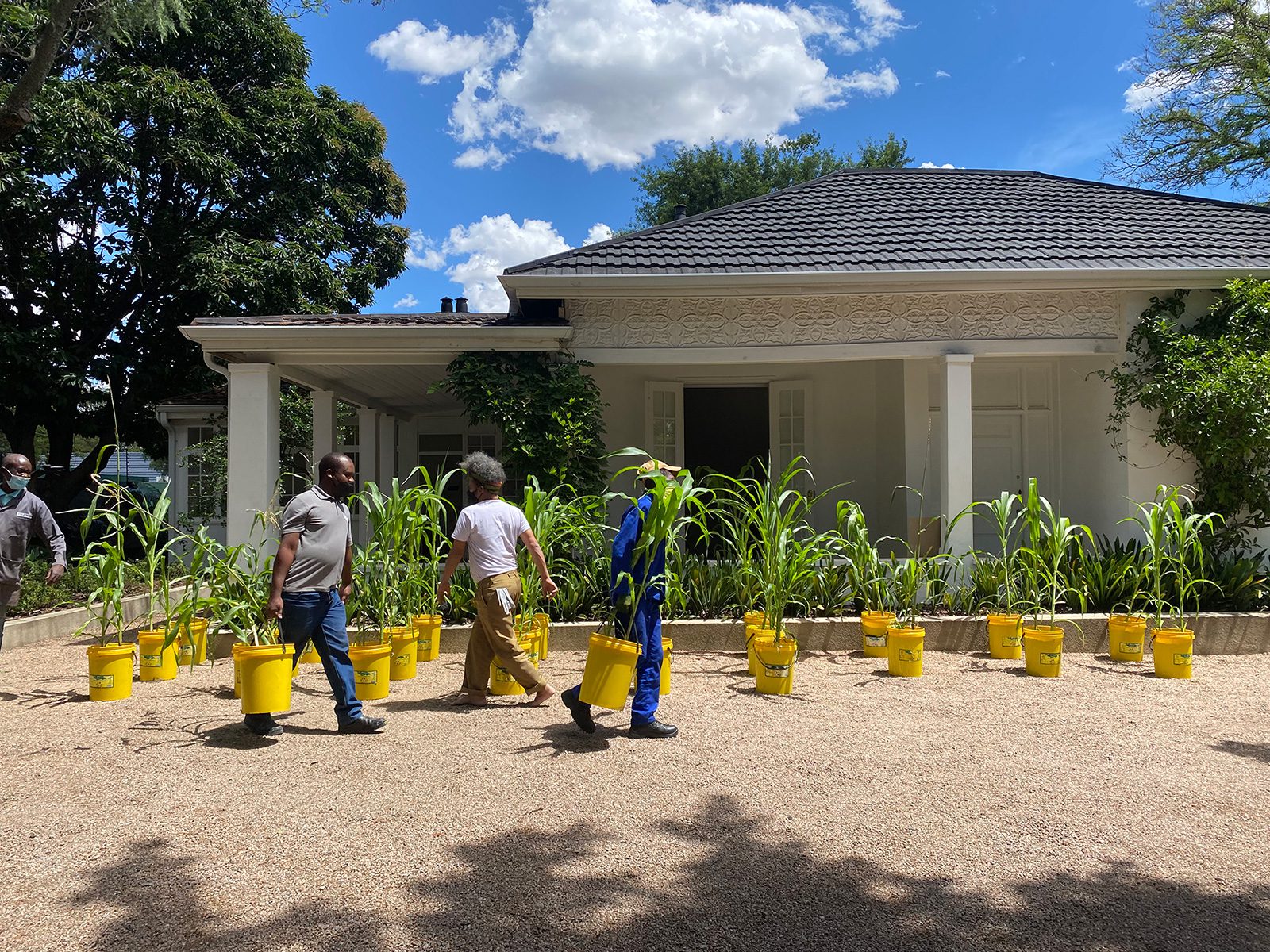 Comprising sculpture, installation, drawing, photography and painting, using both naturally occurring and artificial materials, INTAKA ENDALA EPHEZU’ KOMKHOMBE OMHLOPHE spotlights the interplay of paradoxes between the immediate needs of life and the assumed requirements of a modernity governed by global white supremacy.

The title of this exhibition translates from isiXhosa as ‘an old bird on top of a white rhinoceros’, an idiom that speaks about symbiosis, questioning what is perceived as valuable and what is designated parasitic. In exploring this notion Nazareth uses the maize crop as a foundational metaphor. Black and white species of this crop, first exhibited in the group exhibition my whole body changed into something else and cultivated at the gallery, are installed to highlight the tension of value between the real and the representational. Nazareth writes:

Our society is shaped by both culture and nature. The maize we know today is not natural; transgenic crops have existed for thousands of years, but this practice was only weaponised more recently. Maize became food for constructing labour relations as we know them today. When the enslaved went on hunger strikes, they were made to eat maize soup or corn porridge by force. I talk about yellow corn because of the ‘yellow threat’, a term that came from the United States to refer to the influx of Asian immigrants, particularly the Chinese. I call it the ‘yellow fear’ because it is a mental construction of an ‘other’ while maintaining the benefits of commercial trade from China.

A MAZE, a sculpture created in 2019 for Nazareth’s presentation ENKOSI, UMOYA WABUYA [‘Thank you, the spirit has returned’), is included to amplify this complex of meanings further. On the occasion of the work’s first showing, Sisipho Ngodwana wrote:

In A MAZE, a brick is placed on a corncob laid directly on the floor. We may assume that the work references the domestication of corn from Central America to Africa, where it is now called maize and has become one of the continent’s biggest home-grown crops. The pun in the title suggests that the expansion of the slave trade and the consequential economic growth in the West is as much a conglomeration of movement and displacement as it is a network of near-unfathomable and complex paths that demand further and sometimes involuntary migration.
MAIZE, the installation at the centre of this exhibition, takes the form of a labyrinth created with maize and bricks, and elaborates on these ideas in three dimensions. Nazareth’s crafting of a puzzle that cannot be solved brings into focus the intractable consequences of history in the present, with the suspension of resolution reflecting the ongoing scramble for survival in contemporary life. He remarks:

Birds are like immigrants because they move around space freely. They also don’t carry papers but instead carry seeds that move the plants around. The birds eat the seeds, and the humans eat the birds, but the seeds eat the humans because when you die and are buried, the earth eats you and makes you the food of the birds. Like humans, sometimes the birds never find their way home because of death that is sometimes natural but sometimes inflicted by a toxic environment.
In INTAKA ENDALA EPHEZU’ KOMKHOMBE OMHLOPHE, Nazareth introduces new images into his repertoire, including the pink flamingo. Integrated into the artist’s lexicon this bird is offered as an emblem of safety. Known for moving only when threatened, its assured presence in INTAKA ESEFESTILENI, a pyramidal installation constructed with polenta corn and wild bird seed, is offered as a totem of safe harbour for the marginal and migratory.

This is Nazareth’s second solo exhibition with Stevenson, following PHAMBI KWENDLOVU in Cape Town in 2019, and is his first in the gallery’s Johannesburg space.

The exhibition opens on Saturday 27 November, 10am to 1pm.