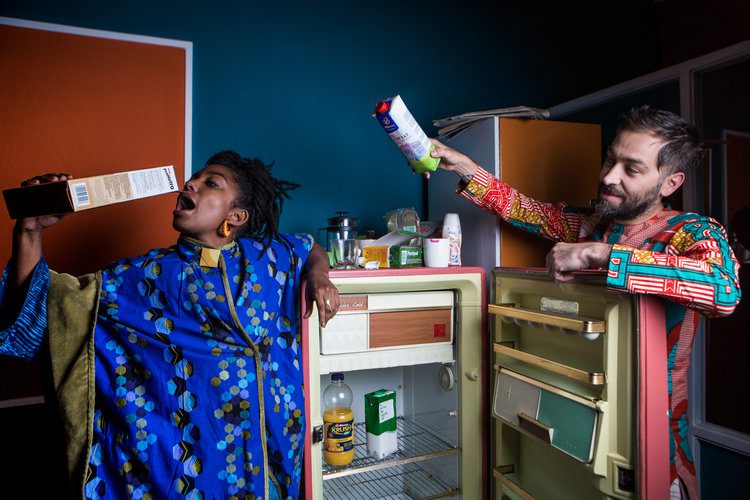 The Gallow Gate welcomes Lindiwe Matshikiza and João Renato Orecchia Zúñiga in residence this month. The artists have been invited to take this time to experiment and to play, sharing a work in progress, open for reflections, rather than ‘finished’ work.

Lindiwe and João are frequent collaborators and contribute to each other’s work in a multitude of ways, both visibly and behind the scenes. Together they form two thirds of Mother Box, a non-profit, artist-led organisation studying self-determined artistic research and processes with the aim of articulating them in a language that embodies the processes themselves.

I don’t know what form it’s going to take. Being in the dark is a question of inside and outside feeling.
It’s in me…that…something is happening.
I’m….I’m….I….I’m…..Me….I’m not….me

Ritual Being is a new work being developed by sound artist, musician and composer, João Renato Orecchia Zúñiga and writer-director, Lindiwe Matshikiza. Seeking to make a new, more portable collaborative work together, the two artists have been developing the story of a character attempting to speak from a space between life and death, wake and dream, with an urgent message to deliver. Inspired by a range of African and South American myths, histories and codes, this inter-dimensional character’s communications are translated between sound, ritual and story.

The piece combines the abilities and individual processes of Lindiwe and João, resulting in sound compositions, texts and performative elements devised in response to one another. Members of the public are invited to experience this work-in-progress as a live performance by the two artists, who will be conducting their early explorations during a two-week residency at The Gallow Gate in Glasgow.

Lindiwe Matshikiza is a Johannesburg-based artist with a background in theatre-making. She works as a writer, performer, director and voice artist in a variety of contexts such as visual arts projects, public performances, stage plays, film and other media. Her approach is predominantly collaborative, exploratory, process-based and cross-disciplinary, and her projects often take on more than one form over time. Her recent work includes long term projects such as the play/film Desert, experimental documentary and life-writing work with Grace Mothiba Bapela – One Take Grace – and her performance and collusion in the partly fictional, metatextual project Film Festival Film which recently premiered at the 69th Berlinale. Lindiwe is also a trained ecdysiast, performing as The Secret Life of Plants.

João Renato Orecchia Zúñiga is a Peruvian Italian Brooklyn-born Johannesburg based artist, composer and maker of physical and virtual “things” that play with reality by deconstructing it, shifting expectations of standard uses or purposes of objects and processes. Through experimentation and improvisation he explores sound’s connective capacities through both its physical properties and material preconscious properties, seeking a balance between computer technology, hand-made electronics and real world sounds like the human voice, field recordings and traditional musical instruments. Orecchia’s background as a self-taught musician is in improvised performance and composition for video art, film and theatre. His practice extends to public performance and intervention and his recently completed master’s degree in Digital Arts brought a shift towards a more spatial and physical approach to composition, where sound, vibration, space, music and audience become connected in experience. Orecchia has released several recordings, has received a South African Film & Television Award for sound design and has published in the Leonardo Music Journal and the Oxford Handbook of Sound Studies.