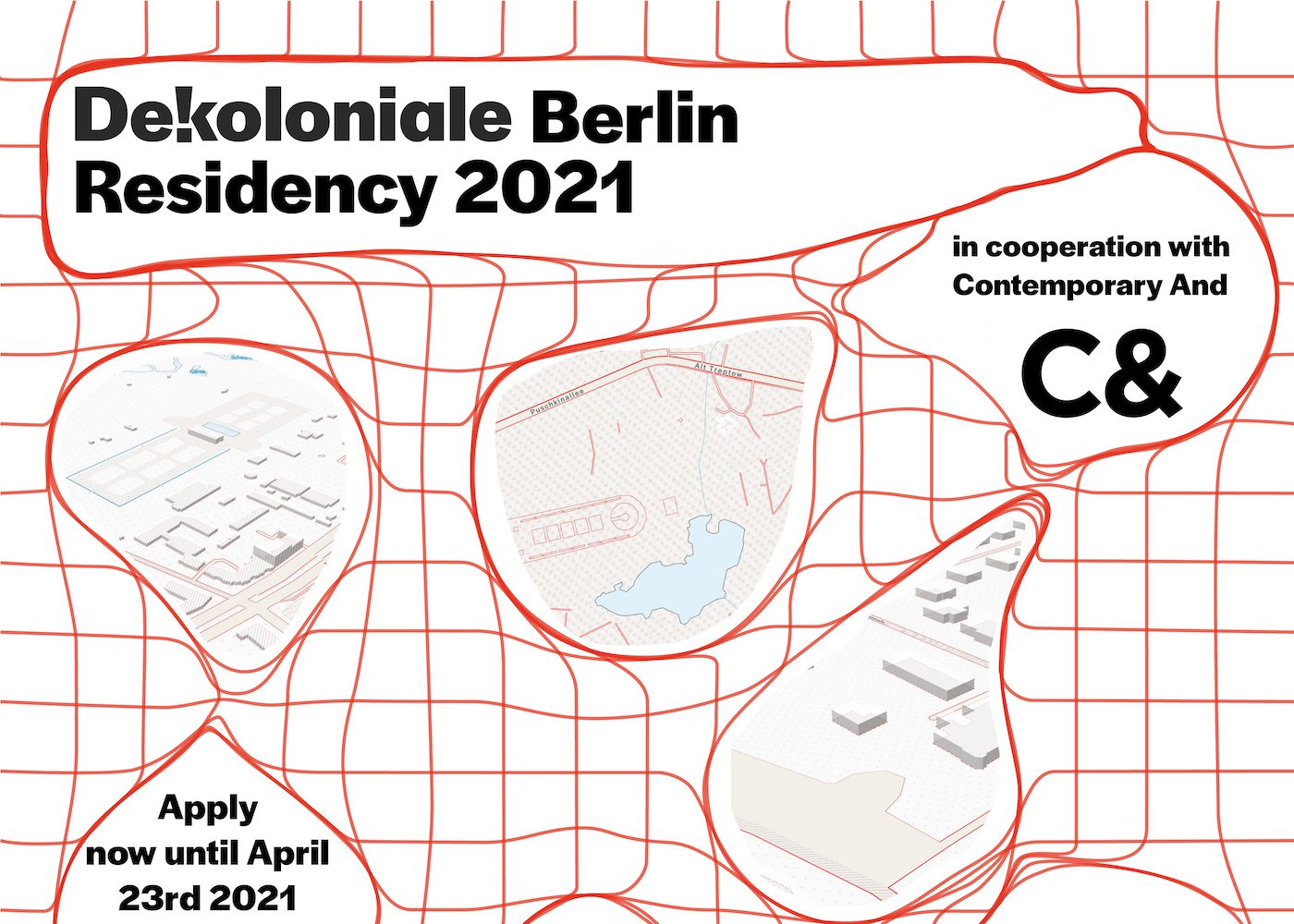 Applicants are invited to uncover and transform historical colonial stratifications and dominant narratives in Berlin‘s public space as well as traces of its preceding histories of involvement in the European trade of enslaved Africans. We welcome proposals that engage directly with the sites or topics of the first Dekoloniale [Re]presentation exhibition, Gazing Back[wards], and with the colonial history of Berlin and Germany at large, while questioning the colonial connotations of exhibiting in general.

The year 2021 marks the 125th anniversary of the First German Colonial Exhibition. Held in 1896 in Berlin‘s Treptower Park, the show presented itself as a trade fair for Berlin‘s and Germany‘s colonial economy, enabling the German Empire to distinguish itself as a colonial power. Part of this staging was the display of people from the German colonies in the context of stereotyping Völkerschauen (human zoos). Scientists, including anthropologists, conducted studies on the people on display. The Colonial Exhibition exemplifies the importance of staging and performativity for the colonial project, but also illustrates various activities of self-assertion by the colonized against foreign categorizations. Moreover, it was an example of how politics, economics, the entertainment industry, and science functioned as reciprocal resources in the colonial era, mutually reinforcing one another.

The Dekoloniale [Re]presentation exhibition Gazing Back[wards] of 2017 focused on resistance within the First German Colonial Exhibition. The leading Duálá families from Cameroon did not consider themselves to be “exhibits”: they occupied themselves with studying the colonial power, its culture, language, politics, and technology. The young men flirted with curious Berlin women, parodying individual visitors and mimicking the marching German military. With a pair of opera glasses, the Duálá king‘s son, Bismarck Bell/Kwelle Ndumbe, gazed back at the gawking crowd, thus inspiring the title of the exhibition.

The two selected residents are expected to co-create an artistic intervention in the public sphere and are encouraged to consider hybrid modes of thought, research, and practice. We favor collaborative formats and forms of expression that expand disciplinary boundaries. The forms that the work produced might take range from a physical structure in the Treptower Park to a regionally distributed publication.

The two residents are expected to develop a collaborative work within the period of August to October 2021, with a final public presentation on October 16. Speakers of all mother tongues are encouraged to apply, however please note that the two residents are expected to be able to communicate and collaborate in English. The residents are provided with travel costs, accommodation and a per diem in Berlin throughout the residency period, a production budget for the implementation of the joint project, and a fee. They will have full access to the Dekoloniale project space, curatorial guidance, and production support depending on needs and availability.

Gazing Back[wards] 2017 built on the experiences, results, and requirements of that working process to develop a new exhibition on the First German Colonial Exhibition. The revised exhibition opening on October 15th 2021 will complement the previous research, which focused on the life stories of the Völkerschau participants, with research on the participating companies and actors from trade and the entertainment industry embedding the colonial exhibition in the history and presence of comparable displays in Germany and internationally. The development of the revised Gazing Back[wards] exhibition is being carried out in close cooperation with Museum Treptow.

How to apply
Applicants submit their application to residency@dekoloniale.de:

Deadline: April 23th, 2021
The application process is entirely online. Proposals will be evaluated according to the following criteria: relevance to the site or topic of First German Colonial Exhibition; contribution to the field of decolonial urban practice; and aesthetic merit – either as a form of knowledge or aspect of design. The two residents will be selected by an international jury.

Sites of Reference 1: Treptower Park, Carp Pond
The 88.2-hectare Treptower park was laid out in 1876–88. In 1896, the First Colonial Exhibition opened here. The artificial Karpfenteich (carp pond), initially created for fish breeding, became the exhibition’s infamous scenery. Treptower Park is one of four Berlin parks to have survived from the 19th century. At the end of the twentieth century, extensive conservation work was carried out and the park was historically reconstructed in parts, leaving out any traces commemorating these early events. Today Treptower Park, with its river landscape, huge meadows, and tranquil areas, is very popular for recreational uses of all kinds.

Sites of Reference 2: Schloss Friedrichsfelde and Tierpark
The Schloss Friedrichsfelde is a neoclassical-style palace in the center of Berlin’s Tierpark (zoo), built in the Friedrichsfelde district in 1685 by Benjamin Raule, a Dutch shipowner in charge of the early Brandenburg enslavement trade. The Great Elector Frederick William I of Brandenburg conferred the plot of Schloss Friedrichsfelde on Raule in 1682 for his ›services‹ as part of the Kurbrandenburg Navy, namely founding a company involved in the abduction of enslaved African people. With the income thus generated, Raule financed the construction of a small zoo on his estate, today‘s renowned Tierpark Friedrichfelde. In 2020, the zoo opened its newly designed large animal enclosure with a backdrop of stereotypical huts that it says are supposed to provide “authentic glimpses of a spacious Savannah landscape” under the title »Off to Africa«.