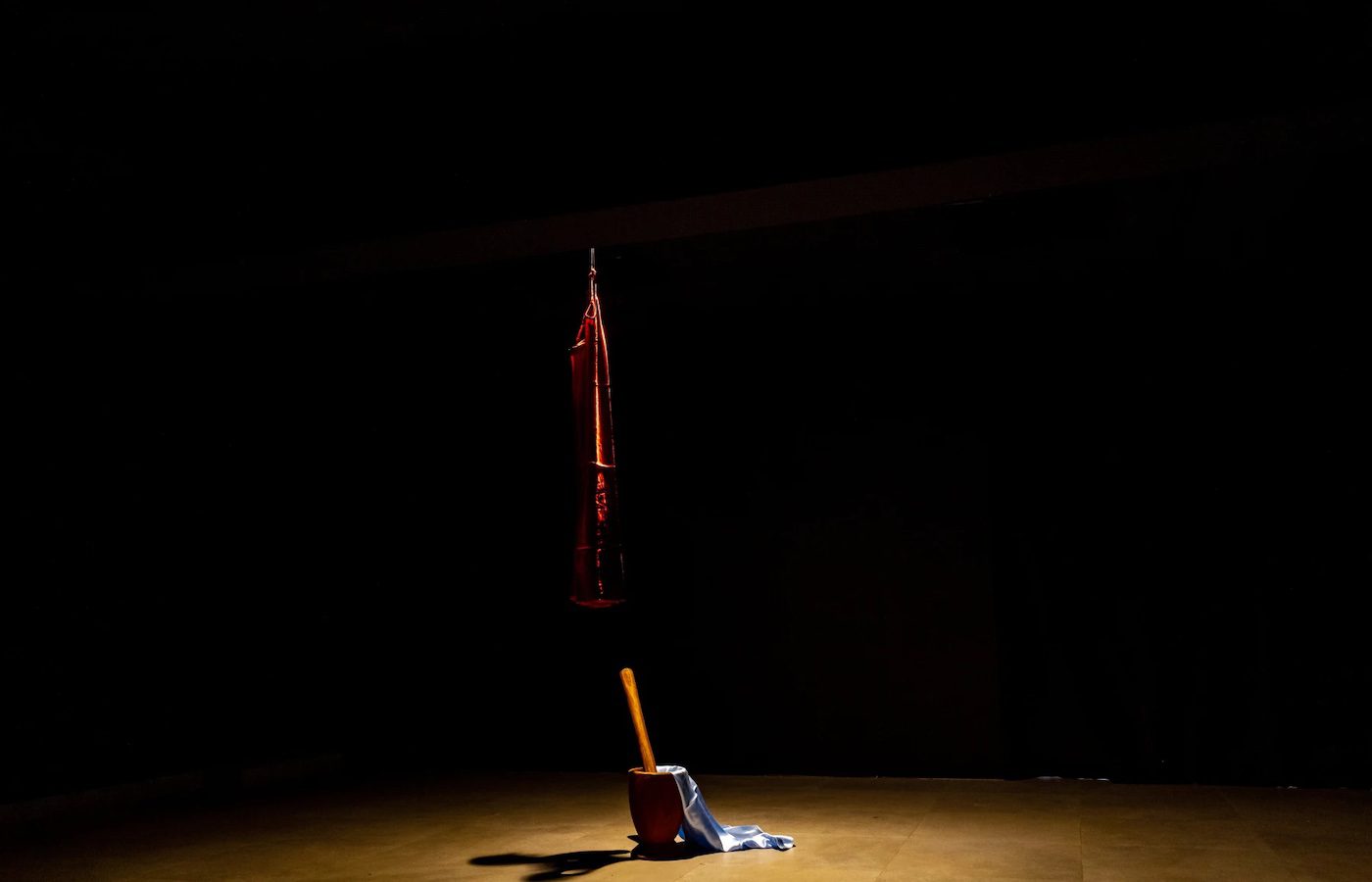 Galerie Cécile Fakhoury presents the first solo exhibition of the artist Binta Diaw in Senegal, Toolu xeer. It is by a title with multiple evocations that the Senegalese and Italian artist Binta Diaw invites us to enter the exhibition. Toolu xeer – [the stone field] in Wolof is a symbolic and literal space where the artist seizes the material that surrounds him to make the world. The exhibition is part of a discreet but essential dialogue with the theme of the Dakar Biennale, Ĩ Ndaffa / Forger. Here, Binta Diaw forges our perceptions through a subtle play of references to Senegalese history and art history.

In the spring of 2021, popular riots break out in Dakar, challenging what their leaders denounce as bullying against the freedom of civil society. Curfew linked to the pandemic, control of whatsapp communications, ambiguous modifications of the legislation: this wave of protests will cost the life of 13 people; 13 souls incarnated in the installation Strange Fruit (2022). A ball weighs, suspended like a motionless pendulum that sounds the death knell of consensus. Under the green yellow red starry aegis, the stones of anger are forcibly held together… Until they break. By entering the immaculate cube designed by the artist, the immersion is total. If you listen carefully beyond the polite silence of the gallery, you will hear the clamor of a stone song whose projectiles of future conflicts are waiting, sharpened, for their time. A ball hangs, suspended like a motionless hanged man, ringing out the notes of Billie Holiday’s Strange Fruit, a heart-rending jazz lament about slavery.

In the second room, another complaint, this time beautiful and sonorous, is heard. With an economy of means that characterizes her practice and echoes the current of minimalism and arte povera, Binta Diaw transports us to another moment in history, that of the Thiaroye massacre. In December 1944, the Senegalese riflemen returned to the barracks of Thiaroye, a suburb of Dakar. The insurrection rumbles because these soldiers from the French colonies have not received their pay. For having contested, they were assassinated by the French army in conditions that are still troubled today. Where are the remains of these men killed by France? 1/12/44 (2022) is a field of earth where the stones of the graves are missing. A fertile field, however, where the seeds of our food, millet and corn, grow. Entering the room to the sound of the names of the absent, walking on the ground means confronting history and its voids; but also bearing the responsibility of writing new narratives.

The transfers on fabric, hung on the wall like the pages of a book, are composed of archival images that Binta Diaw drew from the reserves of the Museum of the Armed Forces of Dakar. The reports of the hearings of the trial of Thiaroye, the terms used at the time and loaded with the remains of ideology, rub shoulders with archival images in an evanescent composition. The reading and the comprehension are deserved, the effort of the eye must be equal to the complexity of the history.

Then, in the wooden pestle of terere, (2022), the silences of this one, this history too often told by others than oneself, are crushed with a rage become silent again in the light-darkness of the room. The installation is a theater of manners where the main role is feminine, carried to the nude and crushed. The artist’s vision is subtle, with a balance of forces. Without violence, it poses a presence: that of the role of women in history. Social dresses like avatars, the red of the warrior and the light blue of a soft reassuring night. To sow the seeds of the field, to crush the ideas of the world, to create a space for them to happen. The Senegalese riflemen were accompanied by their wives who maintained the daily life in the camps. In 2021, the women of Dakar also protested.

Toolu xeer is a circular exhibition. The immersive installations respond to each other, connect and complement each other. Interrogating key moments in Senegalese history, Binta Diaw invites us to a poetic and sensitive reflection on the definition of identity and the political roles of the individual in society throughout history.