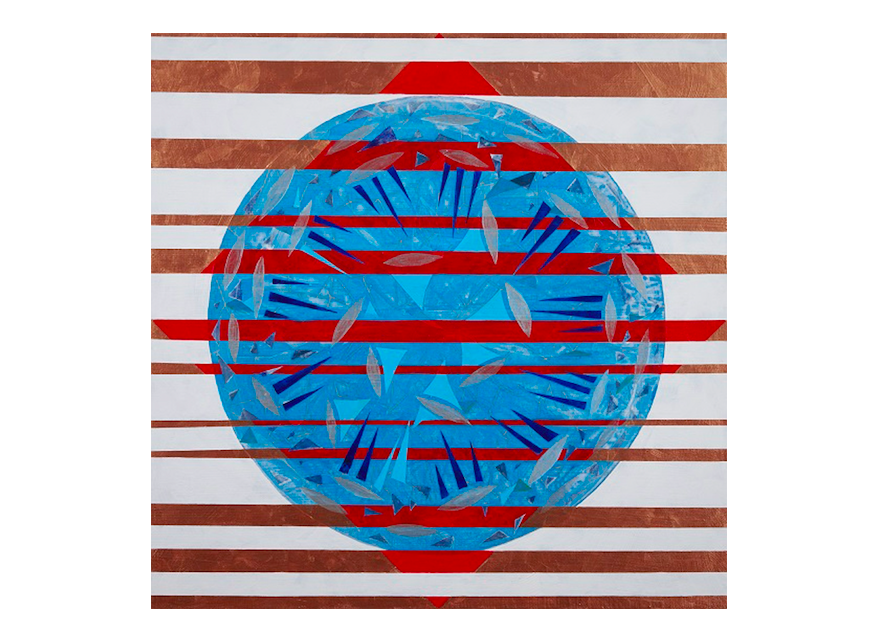 Morton Fine Art presents The Moon is Always Full, an exhibition of seven mixed media paintings and textile works by Adia Millett on view from March 25 to April 22, 2021.

Featuring a suite of recent pieces by the artist, The Moon is Always Full evokes a cosmic grandeur through both abstracted and realist elements and articulates developments in Millett’s practice.

Using a range of process-oriented techniques, Millett takes things apart, removes, replaces, cuts, pastes, sews, and rebuilds to discover the space where transitions occur and where stories of impermanence unfold. Her work weaves together threads of Black American experiences with broader ideas of identity and collective history, suggesting the fragile interconnectivity among all living things. Constructing works assembled from vibrant and textured fragments to fashion a meaning greater than its individual elements, Millett illuminates the multidimensional parallels between the creative process and the nature of personal identity.

In The Moon is Always Full, Millett’s paintings depict strange terrain in which abstracted, geometric shapes subsume the foreground and imply delicate movement through flag-like sets of multi-colored triangles. Vibrant forms expand and collapse freely among glittering backgrounds with hints of landscape. In Millett’s large scale acrylic-on-wood painting Reflection (2020), camouflage-colored clouds float like specters and calcify to reveal a clear blue sky on the horizon. A full moon hovering in the background suggests an omnipotent and ostensibly benevolent figure closely monitoring the fractured landscape and its political dilemma.

In some cases, her pictorial elements are more straightforward, focusing on structural objects such as rooftops, windows and doors. Gold Roof (2019) presents an almost typological night view of a house, its reticulated golden roof carefully rendered in gold leaf, interrupted by the presence of a white moon and realistic plastic window panes that see through to the gallery wall.

Repeatedly circular, black, white, and multicolored patchwork moons float in and out of Millett’s work, reflecting the fluidity of time and the potential for transformation. The textiles, which draw on the domestic and artistic traditions of quilt-making, piece together to combine culturally diverse, often repurposed fabrics and historical iconography.

“While my work pays homage to the past through the use of repurposed fabrics and historical iconography, its bright atheistic imagery looks to, and is informed by the future,” says Millett. “It reminds us of the importance of renewal and rebuilding, not only through the artistic process, but also through the possibility of transformative change.”

Adia Millett, originally from Los Angeles, California received her MFA from the California Institute of the Arts. In 2001, she moved to New York City for the prestigious Whitney Museum Independent Study Program, followed by the Studio Museum in Harlem residency program. Millett has been a standout in numerous group exhibitions including the well-received “Greater New York” show at PS1 in Long Island City, New York and “Freestyle” at the Studio Museum in Harlem, New York. Her work has been featured in exhibitions at the Barbican Gallery in London; The Craft and Folk Museum in LA; The New Museum of Contemporary Art, New York; The Museum of Contemporary Art, Atlanta; The Santa Monica Museum of Art; and The Contemporary Art Center, New Orleans. Millett has taught as an artist in residence at Columbia College in Chicago, UC Santa Cruz, Cooper Union in NY, and California College of the Arts. Millett currently lives and works in Oakland. She has been represented by Morton Fine Art since 2020.