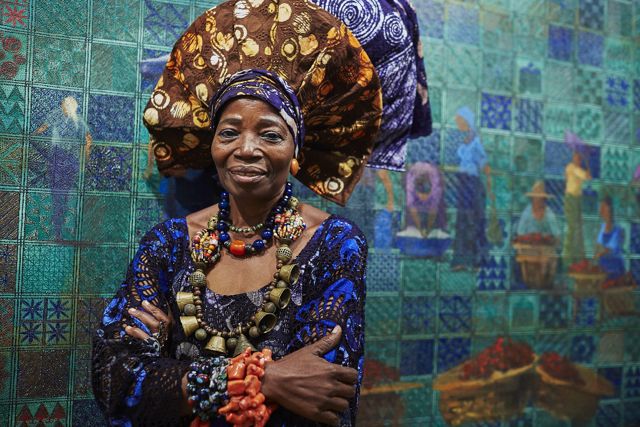 The Gallery of African Art (GAFRA) presents an exhibition of works by acclaimed Nigerian artist Chief Nike Davies-Okundaye. Bringing together works from an international practice spanning over forty years, this retrospective marks the return to the UK of a formidable African artist and icon.

Chief Nike Davies-Okundaye is known for her work with Nigerian traditional textiles – Adire, indigo cloth dyeing and batik. Davies-Okundaye learnt the techniques of traditional weaving and fabric dyeing principally from her great-grandmother who was a weaver and Adire textile maker/dyer during her lifetime. Adire is an indigo dyed cloth produced by Yoruba women in southwestern Nigeria. Once a fading industry, Chief Davies-Okundaye is credited with the contemporary revival of Adire. Her textile work draws upon traditional themes and motifs from her Yoruba heritage reworked with a modernist eye. Her dynamic compositions and rich colour palette explore subjects that include natural phenomena, religion, folklore and mythology.  The batik work Arugba (1978) is one of several textiles featured. The piece depicts a festival that takes place in Osogbo, western Nigeria.

Chief Davies-Okundaye’s paintings have been informed by her textile practice, evidenced in the use of symbols derived from the Adire cloth. These symbols are not merely decorative; each one has a specific meaning. In Angel (2004), cornrow braided angels play traditional African instruments against a backdrop of ordered geometric patterns that seek to caution, offer counsel or give praise.  In Pattern of Our Heritage (1992), Chief Davies-Okundaye pays tribute to the generations of female Adire weavers – Adire symbols were traditionally passed on by a mother to her daughter.

A highlight of the exhibition includes the early monochromatic pen and ink works by Chief Davies-Okundaye. The work Adam and Eve First Love (1978), was produced during her time spent at the famed Osogbo School of Art  – under the guidance of Susanne Wenger. The Osogbo School of Art was a series of experimental art workshops pioneered by Ulli Beier and Susanne Wenger during the 1960s. The later work Drumming (1984), reveals the beginnings of the intricate pattern making that has become her signature. The exhibition also showcases the delicate watercolours that Chief Davies-Okundaye has produced since 1999. These include self-portraits, landscapes and observations from daily life.

Chief Nike Davies-Okundaye’s reach as a visual artist also extends to her collaborations with fellow Nigerian artist Tola Wewe. A partnership stretching back many years, Wewe has described their practice as ‘a visual copula, a kind of lyrical romance on canvas’. The exhibition includes both early and recent ‘Nike and Tola’ works in a variety of scales – from the compact Blossoms of Life (2000) to the expanse of Pillars of Love (2010). In the Feminine Power Series (2002), Tola Wewe’s geometric shapes and stylised forms are complemented by the detailed designs of Chief Davies-Okundaye. The shared Yoruba roots of the artists are found in the beautiful motifs, which appear in many of their compositions. These motifs, which include the fish – a symbol of fertility and the elephant – a sign of strength and vigour, are derived from Yoruba folklore. Recent works such as The Prince and His Bride (2014), suggests a new stylistic direction in their enduring partnership.

Chief (Mrs) Nike Davies-Okundaye was born in 1951 in Ogidi-Ijumu, Kogi State, Nigeria. She was brought up amidst the traditional weaving and dying practice in her native village of Ogidi in Western Nigeria. Chief Nike’s artistic skills were nurtured at a young age by her parents and great grandmother who were musicians and craftspeople. She spent the early part of her life in Osogbo, which is recognised as one of the major centres for art and culture in Nigeria. During her stay in Osogbo, indigo dying and Adire production dominated her informal training. Chief Nike is the founder and director of four art centres, which offers free training to young artists in visual, musical and the performing arts. She is the owner of the largest art gallery in West Africa, compromising over 7,000 artworks. The centres also serve as a rich source of knowledge for traditional arts and culture to scholars and institutions. Nike is known all over the world for promoting her designs through exhibitions and workshops in Nigeria, USA, Belgium, Germany, Austria, Italy and the United Kingdom. Chief Nike lives and works in Lagos, Nigeria.

Tola Wewe was born in Okitipupa, Ondo State, Nigeria in 1959. He graduated with a degree in fine Art from the University of Ife and obtained a Masters degree in African Visual Arts from the University of Ibadan. His work is a hybrid of African and western sensibilities and images reflecting his own training and experience as an international artist. Tola Wewe is a founding member of the Ona movement – a group of scholars, critics and practicing artists committed to pursuing artistic excellence through the adaptation and interpretation of traditional materials, methods, forms and styles of contemporary Yoruba art and design. Tola Wewe lives and works in Ondo, Lagos, Nigeria.

Sandra Poulson: Economy of the Dust

The Company She Keeps – Group Show