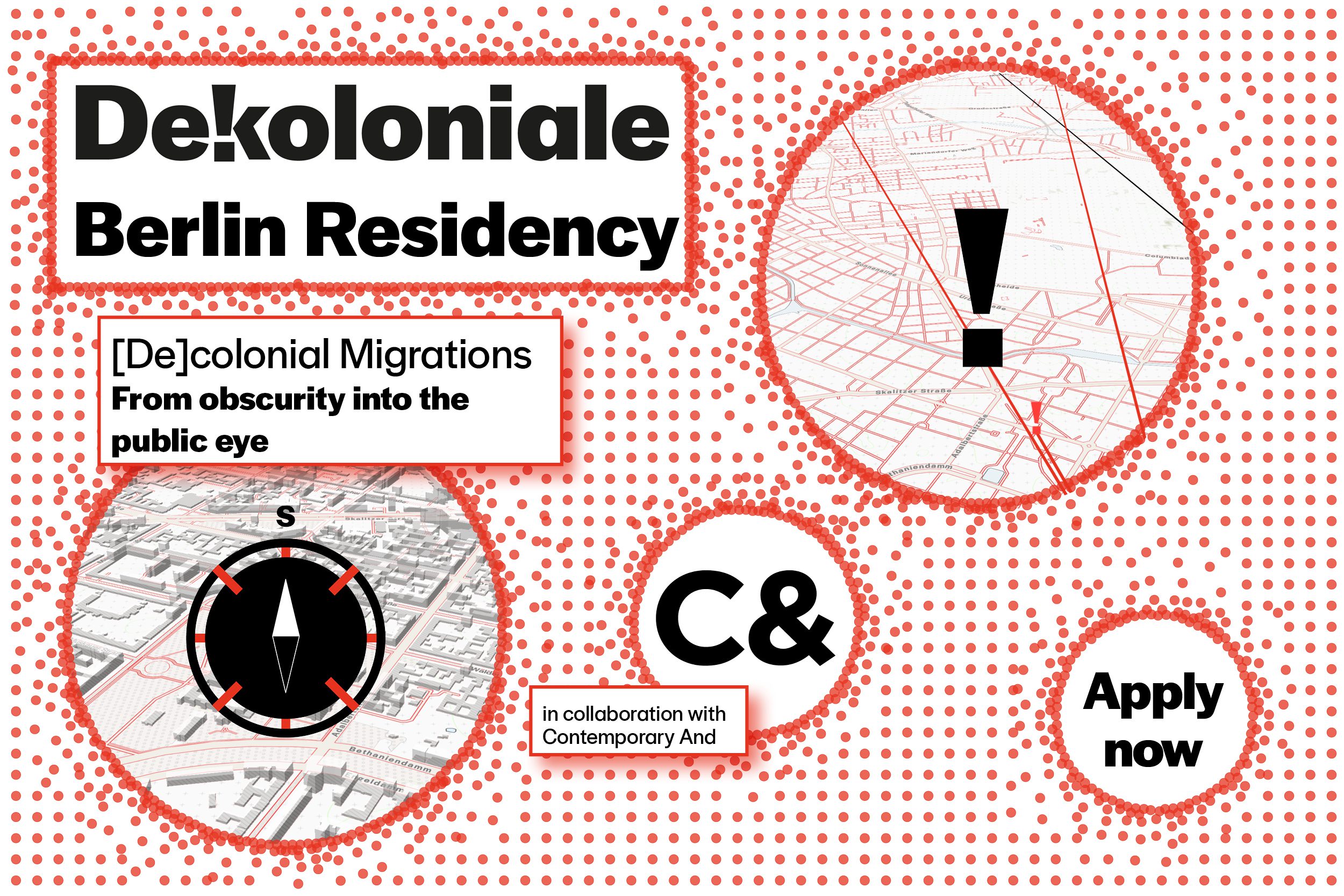 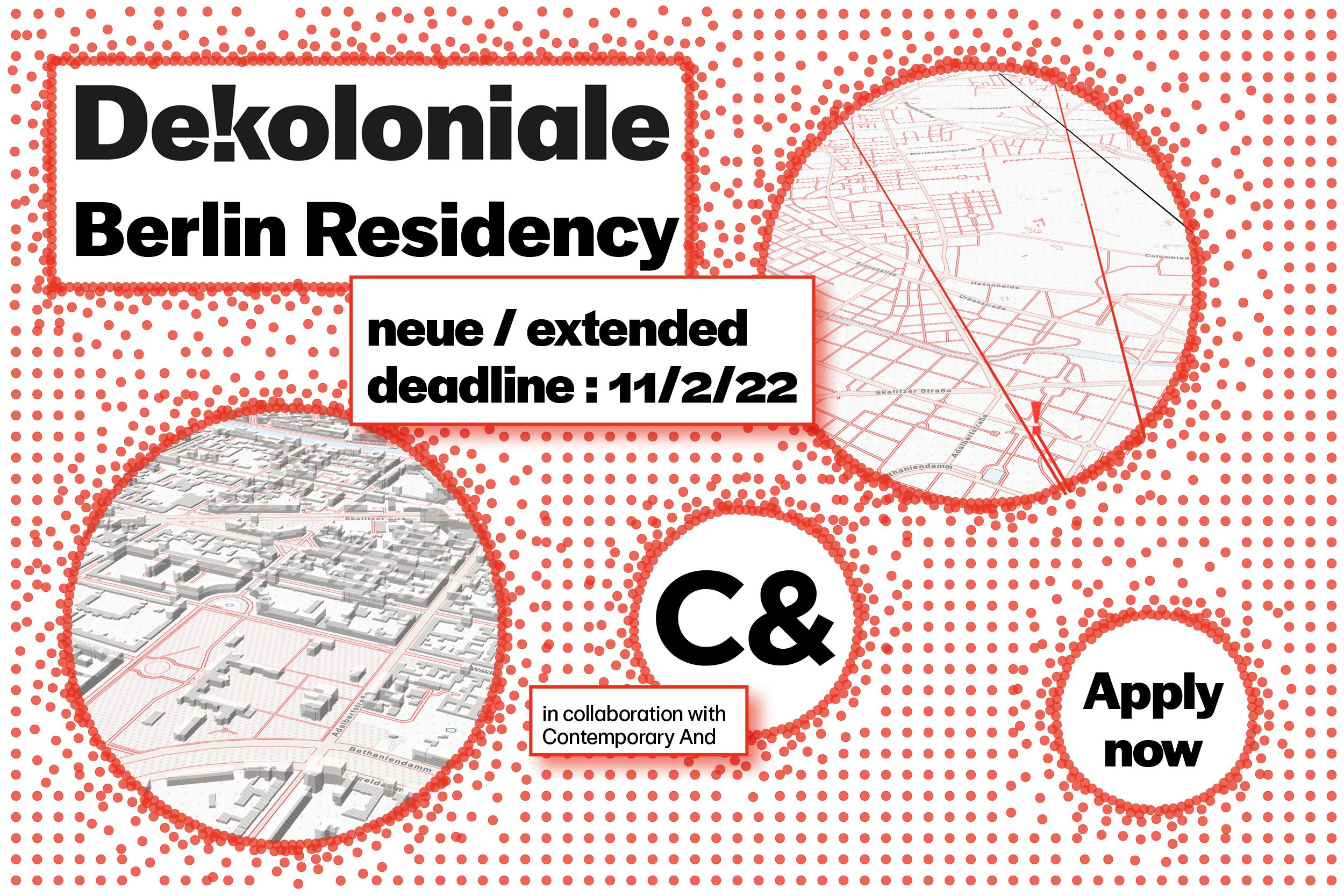 Dekoloniale in collaboration with Contemporary And (C&) announces three Berlin Residencies in 2022 under the theme of “[De]colonial Migrations: From obscurity into the public eye”.

In 2022, Dekoloniale Memory Culture in the City will focus on Berlin’s Southside, examining in depth the city districts of Friedrichshain-Kreuzberg, Neukölln and Tempelhof-Schöneberg. Today, as in the pre-Nazi period between 1884 -1933, this area is characterized by an array of diverse international presences that are however neither anchored in the collective memory nor visible in the public sphere despite their significant impact on the area.A poor precedent that is sadly emblematic for the obscuration of local memory culture is the memorial stone located at the burial ground »Garnisonfriedhof« in Neukölln, which glorifies seven German soldiers who were involved in the genocide against the Ovaherero and Namas from 1904 – 08. It was only after years of protest by civil society groups that a second small plaque commemorating  their victims was added, albeit without  any mention of the Ovaherero and Namas, their size, or the genocide itself.

At the same time, the southern districts of Friedrichshain-Kreuzberg and Neukölln have been an ‘agenda setter’ in the renaming of colonial street names [May-Ayim Ufer (formerly Groebenufer) 2009, Lucy-Lameck Str. (formerly Wissmannstr.) 2021, Audre Lorde Str. (currently Manteuffelstr.) 2022].

Dekoloniale wants to encourage, support and enforce this budding transformation, and implement a memory culture in the city which honors and visualizes anti-colonial and anti-racist resistance fighters  and empowers their descendants and related communities today. With the 2022 Berlin Residency we seek to unhide biographical presences in Berlin’s South, to render their existences visible in the public space and to illuminate their resistance, heritage and oeuvres. More specifically, hitherto obscured biographies from the context of colonial migration (1884-1919) as well as their related contemporary counterparts will take center stage in 2022. Our guiding theoretical perspective is Stuart Hall’s constructivist approach to representation: We thus consider our three invited resident artists as engaged social actors who use the conceptual systems of their respective (counter)cultures and their chosen linguistic and other representation methods as systems to construct meaning, to make these biographies and their practices purposeful and to communicate about them meaningfully to others in the public sphere. As in the previous year, we are inviting three artists to spend the summer months of 2022 here in Berlin, each working on their proposed projects as described in the listing below as well as connecting and collaborating as a team.

The three positions are:

How can the fragments of the lost theater piece / revue »Sonnenaufgang im Morgenland« (»Sunrise in Morningland«) (authored and directed by Bebe Mpessa aka Louis Brody, 1930) be reimagined in a collaborative and contemporary form?

»In December 1930 a remarkable theater show opened in Kliems-Ballroom in Berlin, Neukölln. Inspired by Black theatrical productions in the US and in Paris, the revue ›Sonnenaufgang im Morgenland‹ (Sunrise in Morningland) was staged by members of the city’s diverse Black population. Written by, and also starring, the experienced Cameroonian actor Bebe Mpessa (better known as Louis Brody), the revue was reported to celebrate African history and to feature a live jazz band. Its staging helps to make evident the transnational connections in which Black Germans were active. Sunrise in Morningland can be seen as both an expression of a diasporic identity in the making as well as one of resistance—resistance against hegemonic stereotypes of race as well as a right-wing backlash against Black performers and Black cultural forms in late Weimar Germany.« (1)

(1) Sunrise in Morningland (1930) by Robbie Aitken is licensed under a Creative Commons Attribution-ShareAlike 4.0 International License.

How can biographies as well as objects be exhibited in public space in a creative, modular and mobile fashion? Apply for the Dekoloniale Architecture Residency with a design proposal for a temporary mobile structure that can easily be transported, built, assembled and erected in cityscapes in Europe and Africa alike. The aim of the Dekoloniale Architecture Residency is to develop a feasible design for a mobile exhibition unit that is to be constructed out of weather-resistant standard materials and eligible for a building permit. A prototype or model as well as its open source architectural plans should be presented during the Dekoloniale Festival 2022.

The three selected residents are expected to co-create an artistic intervention in the public sphere and are encouraged to consider hybrid modes of thought, research, and practice. We favor collaborative formats and forms of expression that expand disciplinary boundaries.  Speakers of all mother tongues are encouraged to apply, however please note that the three residents are expected to be able to communicate and collaborate in English. The residents are provided with travel costs, accommodation and a per diem in Berlin throughout the residency period, a production budget for the implementation of the  project, and a stipend. They will have full access to the Dekoloniale project space, curatorial guidance, and production support depending on needs and availability.

The preparation for the Dekoloniale Residency will already start in March, when active cooperation of all residents is required to drive the official approval process of the urban interventions. Please apply only if you are available to communicate and contribute in the months prior. The production of the works in Berlin will take place within the period of mid-June to mid-September 2022 (tbd), with a final public presentation in late August / early September 2022 (exact dates tbd)  in the framework of the Dekoloniale Festival 2022.

Proposals will be evaluated on the following criteria: Their relevance to the tasks as described above, the contribution of the proposed project to the field of decolonial urban practice; on its aesthetic merit – either as a form of knowledge or aspect of design and their feasibility.

Appendix with reference materials for the applications:

About Dekoloniale Memory Culture in the City

Using the example of Berlin, Dekoloniale Memory Culture in the City tests – in a model approach – how a metropolis, its space, its institutions and its society can be examined for (post-)colonial effects on a broad scale, how invisible matters can be rendered tangible and how visible matters can be irritated. The participatory cultural project thus addresses a broad and diverse urban society. It does not only question individual stakeholders or domains – such as museums – about their (post-)colonial realities. With own activities and supportive collaborations, Dekoloniale stirs the entire city into action over the course of the project period.

Dekoloniale Memory Culture in the City is a joint project of Berlin Postkolonial e.V., Each One Teach One – EOTO e.V., Initiative Schwarze Menschen in Deutschland – ISD-Bund e.V. (Initiative of Black People in Germany) and the Stadtmuseum Berlin Foundation. The Landesnetzwerk Berliner Entwicklungspolitischer Ratschlag – BER e.V. (National Network Berlin Development Policy Advice) supports the project as a partner. In addition, we closely cooperate with the Deutsche Technikmuseum Berlin (German Technology Museum Berlin) and the Berlin district museums in Treptow-Köpenick, Friedrichshain-Kreuzberg, Charlottenburg-Wilmersdorf and Berlin-Mitte. The subproject In[ter]ventionen is sponsored by the Berlin Senate Department for Culture and Europe.