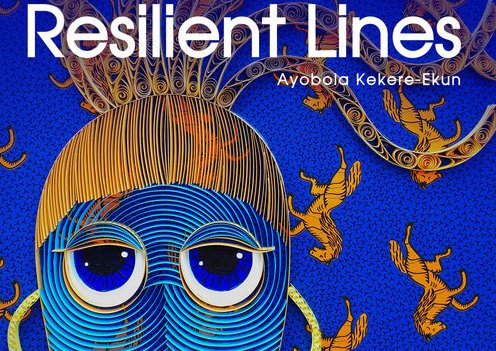 Rele Gallery presents “Resilient Lines”, the first solo exhibition of visual artist Ayobola Kekere-Ekun. The exhibition title is intended first to encapsulate the spirit and complexity of femininity and womanhood across lineages; and secondly as a means of referencing the usage of linear and multilinear lines prominent in Kekere-Ekun’s artistic output. The new body of work comprises of two series “History and Mythology” and “The Crown”.  It explores the stories of women who contribute significantly to the development of their societies, do not get their due in so doing and yet still have to navigate endless cycles of injustices.

Kekere-Ekun creates predominantly with a technique dubbed ‘quilling’, in which paper material are stripped and manipulated to create textured, two-dimensional forms. Quilling has roots stemming as far back as the 15th century when it served mostly decorative purposes. The medium has since progressed, finding mainstream relevance and success in the works of contemporary artists such as Ihwa Kim from Korea. In 2016, Kekere-Ekun first exhibited works using this medium publicly at the inaugural edition of the Young Contemporaries, early days into mastering her chosen material.

Three years later, having participated in multiple group shows, live performances and experimentation with the medium, Kekere-Ekun’s practise with the material has evolved and matured. This exhibition is a testament to the new levels of sophistication she has reached in stretching the material’s capabilities.

Her approach in terms of lines and color usage have gotten more complex and focused; morphing into intricate, precise, and aesthetic picturesque figurative forms. One encounters the best of this transformation in her most ambitious work to date in the piece “First World Problems, Third World Edition” presented under the “Crown Series” where she debuts multiple characters in a single frame.

Exploring the cultural nuances surrounding femininity, the works in “History and Mythology” address the lack of visibility of female deities in modern cultural documentation and narratives. Kekere-Ekun emphasizes the term “societal femininity foibles”, a portrayal of females as weak and irrelevant. She rectifies this ongoing misnomer by reminding us of dynamic female goddesses such as “Osunmare”, “Aja”, “Olosa” and “Yewa”. Goddesses who possess unique qualities and are considered powerful and influential. Off the back of this history, Kekere-Ekun creates more deification of womanhood in contemporary form as “The Mutants” presenting “The CEO”, “The Spinster”, “The Housewife”, characters who regardless of their achievements are still ultimately judged by patriarchal markers of success. She further investigates these gender biases against the backdrop of leading female characters in today’s Nigerian literature such as Lola Shoneyin’s Baba Segi’s Wives and Chimamanda Ngozi Adichie’s Purple Hibiscus novels.  With works in “The Crown” series, Kekere-Ekun presents works that propounds the idea that misogyny ceases to exist  simply because of the power that a few women possess. The Crown posits that this is a dangerous perspective to entertain as women still face numerous forms of discrimination and abuse.

This March, as the world gathers to celebrate the strides attained by women past and present, Resilient Lines is a timely exhibition that succinctly unravels the deep rooted characteristics that informs and forms what it is to be a woman in Nigeria today.