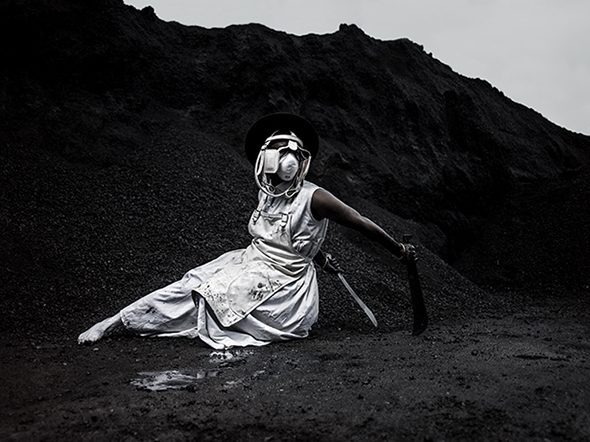 Held from 30th March to 2nd April 2017, Art Paris Art fair is the leading springtime event for modern and contemporary art in Paris. Open to all forms of artistic expression including design, Art Paris Art Fair provides an overview of art from the post-war years to the current day with a theme-based approach that emphasises discovery. This edition puts African art under the spotlight and features monographic exhibitions in the Solo Show section and up-and-coming artists in Promises.

Since 2012, the fair has built a reputation for its exploration of international art scenes. After Asia, Art Paris Art Fair continues to shed light on new scenes by inviting Africa as guest of honour in 2017.
Under the leadership of cultural consultant and independent exhibition curator, Marie-Ann Yemsi, the invitation of Africa as guest of honour highlights a previously-unseen perspective of contemporary African artistic horizons, as well as other visions of purely African or wider-ranging influences.
Spread across the different sections of the fair, around twenty galleries from South Africa, Angola, Cameroon, the Ivory Coast, Morocco, Nigeria, Uganda, Senegal, Tunisia and Europe showcase the talented emerging generation of artists from both the African continent itself and its diaspora.

In addition to monographic exhibitions featuring Mohau Modisakeng, who will represent South Africa at the next Venice Biennale (Whatiftheworld Gallery), Billie Zangewa (Afronova Gallery) and Mario Macilau (Ed Cross Fine Art), visitors will have another chance to see the large works on paper by Zimbabwe’s representative at the 56th Venice Biennale, Gareth Nyandoro, (Tiwani Contemporary), repurposed objects by Romuald Hazoumé (October Gallery) and the poetic installations of the Cameroonian artist Bili Bidjocka on the stand of Afriart Gallery / l’Agence à Paris.
On top of the galleries that are part of the focus, around ten western galleries have chosen to show the work of their African artists, in particular the Senegalese artist Omar Ba (Galerie Daniel Templon), South African Kendell Geers (ADN Galeria), and the artists represented by Magnin-A (Chéri Samba and Bodys Isek Kingelez…). In total, almost 70 artists will be presented by the participating galleries.

A very complete events programme will accompany the exploration of this continent in a state of artistic effervescence:

A selection of videos entitled Landscapes of the Body will be screened at Art Paris Art Fairat the Grand Palais.These films explore the work of artists for whom the body is both the subject of their questioning and the means of expression of their art.

La Colonie is “a new space designed to encourage free and independent thinking” created by the artist Kader Attia. It will host a day of encounters and talks on the March 31 from 10am to 6:30pm that will bring together key cultural figures and producers who are committed to promoting Africa-based artists and members of the diaspora.

Finally this african spotlight coincides with many other exhibitions in various Parisian museums and institutions: As part of its festival 100% Afriques, La Villette will showcase every aspect of contemporary African creation and put on an exhibition, Afriques Capitales, curated by Simon Njami. In collaboration with Hans Lemmen, an exhibition at the Musée de la Chasse et de la Nature will feature South African artist Roger Ballen, whereas the Musée du Quai Branly-Jacques Chirac will be exploring L’Afrique des routes. The Musée Dapper has lent its walls to the Senegalese artist Soly Cissé, whereas the Galerie des Galeries hosts Le jour qui vient, an exhibition curated by Marie-Ann Yemsi, which promises an encounter with a whole new generation of African artists and echoes the fair’s special focus.

.
Promises: a new prize to support emerging creative talents
The Promises section showcases twelve promising galleries established less than six years ago. The 2017 selection is entirely international with galleries from Abidjan, Amsterdam, Bogota, Bratislava, Geneva, Lagos, London, Luanda and Rome.
New for 2017, Art Paris Art Fair, in partnership with The Fine Art Collective, is launching the L’art est vivant prize that will honour an artist whose work is presented at Promises.

The Solo Show section includes some 24 personal exhibitions scattered throughout the fair. This is an opportunity to discover or re-discover the work of modern or contemporary artists.

Solo Show goes on the road with Bus Expo
From March 25 to April 3, 2017, the busses Le Bus Direct – Paris Aéroport that shuttle between the city and its airports in the greater Paris area as well as along the capital’s main avenues will feature  an itinerant exhibition of the work of five artists from the fair’s Solo Show section. The aim is to make contemporary art accessible to the widest possible audience.