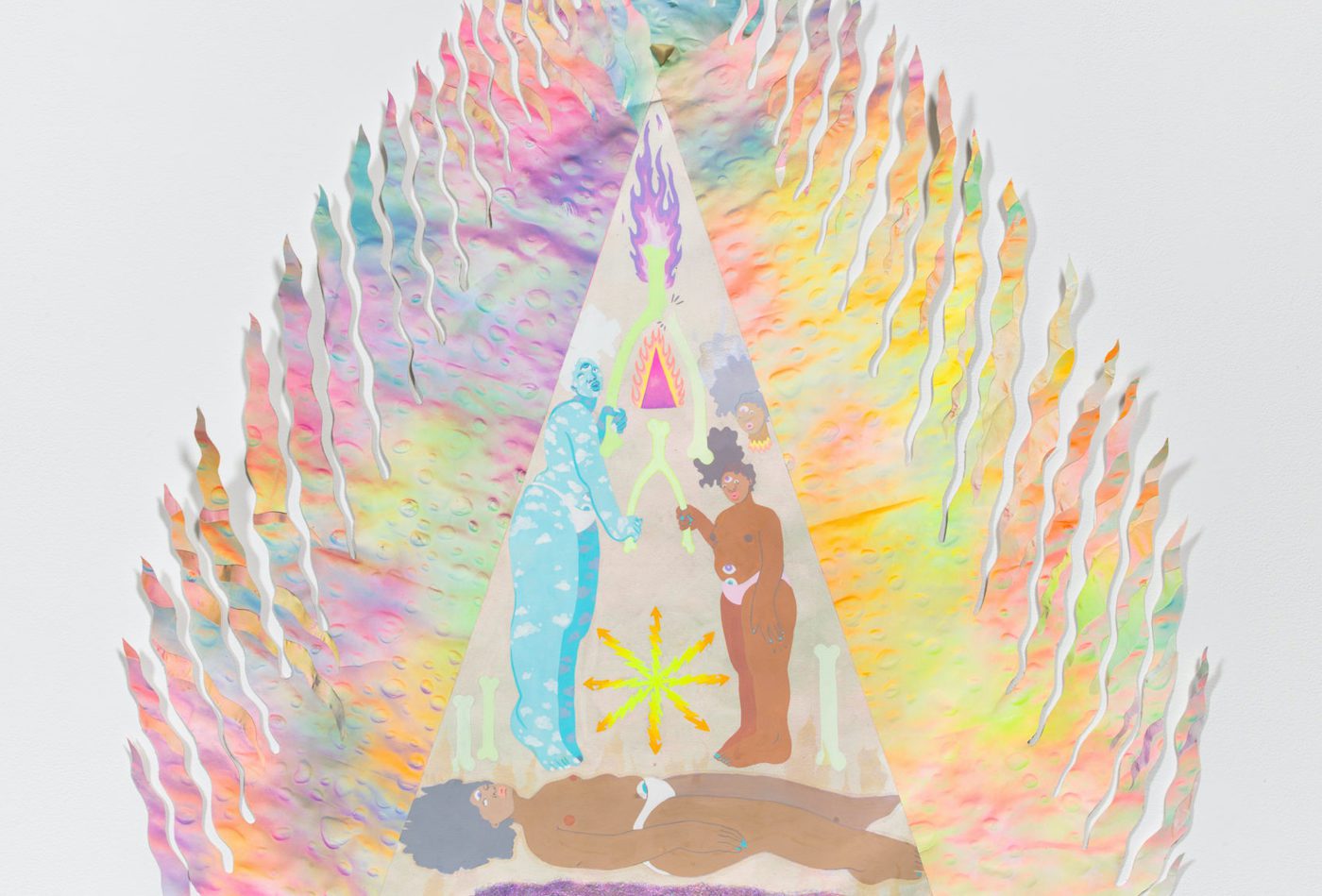 Amaryllis DeJesus Moleski: Portal Pieces is the third installment of Aldrich Projects, a single artist series that features a singular work or a focused body of work by an artist every four months on the Museum’s campus. Sited in the Leir Atrium, Amaryllis DeJesus Moleski presents two large-scale works on paper, Graduation Day, 2021, and The Guardians, 2015.

DeJesus Moleski’s practice is informed by her Puerto Rican American heritage and a peripatetic upbringing spent crisscrossing the US. Probing motifs of intersectionality, mythmaking, and queerness, she says her visual worldbuilding exploits the “spaces in-between categories” and honors “the trouble and pleasure [sited] there.”

Graduation Day is a monumental drawing and collage on paper. It depicts a volcano erupting a rainbow inferno. Inside a triangular-shaped grotto a figure levitates above a shadowy portal. Two spirit beings, one an iridescent blue and the other a fluorescent brown, hover over the reposing body. They each clench one end of a wishbone, a symbol of untapped potential. A pink triangle blazes, snapping the wishbone, and releasing a purple flame that burns and shimmers with beaming optimism.
The Guardians is a large gouache and tea drawing on paper. It portrays a pair of protectors with outsized bellies brandishing bone swords in the company of a dark horse. Within a field of chamomile, they stand guard. Each is heavily adorned and tattooed with symbols of strength, abundance, nourishment, and passage.

These two works on paper are part of an ongoing mythology that spotlight marginalized histories and femme power. Aroused by lived and imagined experience, DeJesus Moleski’s utopian storylines talk about struggle, redemption, repair, and reinvention.
Amaryllis DeJesus Moleski was born in 1985 in Bordeaux, France, and lives and works in Brooklyn, New York.

She earned an MFA from the Yale School of Art in 2019 and a BFA from California College of the Arts in 2014. She is a current recipient of the Keyholder Residency at Lower East Side Printshop, a 2021 Creative Capital Awardee, and was a 2019 Kindle Project Makers Muse Award recipient. Her work has been exhibited both nationally and internationally including the Brooklyn Museum, El Museo Del Barrio, Cue Art Foundation, MoCADA, SOMArts, New York University, Luce Gallery, Weatherspoon Art Museum, among others. DeJesus Moleski will be featured in the Museum’s forthcoming exhibition, 52 Artists: A Feminist Milestone, opening in June 22.