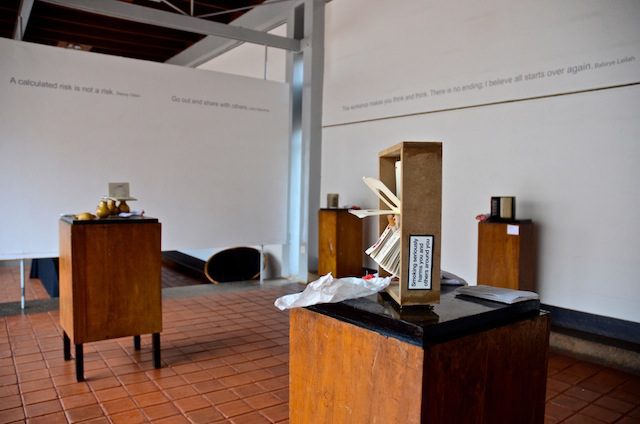 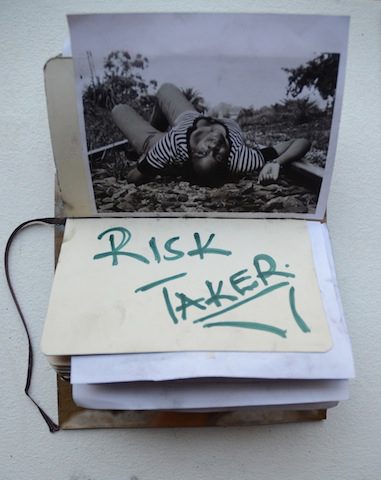 A review about the AtWork arts project in Kampala

The Kampala Episode: A Collective Self-Analysis

The recent edition of the AtWork arts project focused on an existential topic – the artist’s sense of the self.

No teachers, no students, but plenty of dialogue: The recent edition of the international AtWork arts project focused on an existential topic – the artist’s sense of the self.

The recent exhibition of AtWork at Makerere University’s Art Gallery marks a pivotal time in the development of the arts in Kampala. The products of a week-long inquiry facilitated by curator Simon Njami and the non-profit literacy foundation lettera27 showcases a new artistic generation’s interrogation with the self. Forced to move away from the skills-based mould that has formed their education, twenty participants and five local facilitators were exposed to a short yet transformative exchange.

The idea of AtWork has been conceived from an observation that there was a need for a tool that could encourage nonlinear thinking in places that lacked critical mechanisms for artistic creation. In this way, the format seeks to dissolve the formal boundaries of education and, according to Njami, to “create a system of balance where there is no teacher, no student, but a kind of a dialogue.” AtWork has been configured to adapt to different localities with the basic formula of an institution/organisation, a core agitator and an exhibition. The exploration of the participants is made tangible and translatable through the shared use of a familiar canvas, the Moleskine notebook.

Unlike the previous editions of AtWork in Dakar (2012), and Abidjan (2013) that focused on respective themes such as politics, ownership and human rights, or history, space and identity, Kampala looked to a question: Should I take off my shoes? This query was intended to destabilize the participants existing notions of an arts workshop where they might expect to learn a new technique or the habits of a ‘master’. Immediately, participants were provoked to ask themselves a question rather than being told an answer.

Each notebook suggests a kind of investigation into what one participant mentioned as, “What I think I know, I don’t know.” Being challenged to examine concepts of knowledge both internally and externally provided an opportunity to see each individual’s practice differently. For those who had other opportunities for reflexive inquiry, nurtured through arts residencies or attending sessions with the Global Crit Clinic, this time allowed a continuation to explore deeper within themselves. Students still enrolled in the university’s School of Industrial and Fine Arts were tasked to return to an institution that requires finished products and refined skills. But that too could be altered. When Dr. George Kyeyune, the dean of the department, was asked how his experience as facilitator in AtWork would change his teaching, he replied, “Well, it changes everything.”

AtWork is a process, a dialogue, a contact zone. The notebooks themselves are a mere punctuation in the conversation. With that in mind, how does one exhibit such a liminal continuation of self-discovery? In Dakar, an organic tree-canvas for notebooks was paired with tablets displaying notebook scans that hung suspended in Galerie Le Manège, Institut Français du Sénégal. It showed technology and the Internet as, “a means to free art and its circulation from the tyranny of space and material objects.”(1) In Abidjan’s Fondation Donwahi the hanging idea was replicated against walls with quotes and text inked to carry the visitor through the space.

Kampala, introduced two distinct curatorial elements. Firstly, the inclusion of four performances: Xenson’s violation of the gallery space with dirty discarded shoes, Joshua Kagimu’s musical lure to bring the visitors in, Gloria Kiconco’s poem and lastly Sandra Suubi’s song of beauty. Unfortunately, the curious addition of white cotton gloves and pedestals constructed a kind of barrier between the notebooks and the audience. The requirement to wear gloves stopped the question of ‘should I’ and created an imposition of ‘you must’. Ironically, several artists weren’t too concerned with bare hands touching their work. One even noted, “I like that there are no gloves. It makes her [the notebook] more approachable.” Perhaps the handful of curators present in the workshop could have been tasked to use the space of Makerere Gallery to better interrogate a more inclusive relationship between process, the materiality of narrative and exhibitions.

What is clear from the lingering residue of this AtWork-edition is a hunger from within a part of the arts scene in Kampala to be challenged. The convergence of artists, curators, art spaces and the industry shows a willingness to be adjusted through dialogue with Simon Njami, lettera27 and each other. In the words of lettera27’s Programmes Director, Adama Sanneh, “One of the elements of success is measured in a participant’s ability to start a process of self-reflection through questioning one’s self and… the ability to remix the experience beyond the space of the workshop.” Fortunately, this dialogue is being continued through facebook, blog postings(2) and the donation of notebooks to the AtWork collection and thus the shared licensing of Creative Commons.

Gloria Kiconco, Which African language do you speak?, Doppiozero, March 2015

Kara Blackmore is an anthropologist and curator who currently lives in Kampala and works as a freelance cultural heritage consultant.