In the mid-1990s, while his music career was in hibernation, David Bowie jobbed as an art critic, even covering South Africa’s first post-apartheid art spectacle

The cover of David Bowie’s 1977 studio album Heroes famously quotes a work by Austrian painter Egon Schiele, whose life the pop musician was slated to play in a proposed film by David Hemmings. The biopic never transpired but Bowie’s album cover endures as a classic of late-twentieth century design. Far less remarked on from this vintage period are Bowie’s visits to Kenya, encounters that, while underscored by patrician white privilege, would influence his future arc as a painter and art critic.

In October 1977, shortly after appearing in Just a Gigolo, the much-maligned Hemmings film set in 1920s Berlin, Bowie flew to Kenya with his son Zowie. They holidayed at Treetops, a game lodge in Aberdare National Park. At the behest of Médecins Sans Frontières, Bowie also visited “a Masai encampment” in west Kenya where he drank “milk and blood taken by a tribesman from a cow”.

Writing nearly two decades later in Modern Painters, the posh English art magazine founded in 1987 by art critic Peter Fuller, Bowie recalled his enthusiasm for art from the continent growing out of a series of prints depicting the water spirit Mami Wata, which he bought in Nairobi. Yes, Bowie wrote art criticism, some of it even focussed on the early formulation of contemporary African art, particularly as it took shape in Johannesburg in 1995. 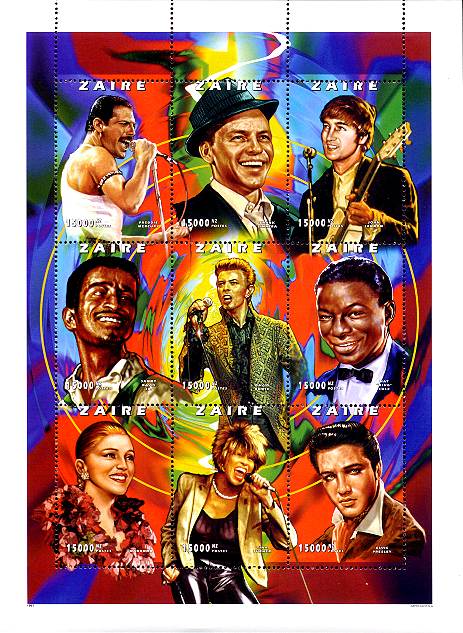 Musically, 1995 was a peculiar year for Bowie, the 48-year-old musician releasing his overblown concept album Outside, that hearkened back to the experimentation of his mid-1970s Berlin trilogy. But in other respects, Bowie, who studied art, music, and design at an all-boys school in suburban London, was treading new ground, both as a painter and critic. His five-page review of the first Johannesburg Biennale in the summer 1995 edition of Modern Painters is a case in point. The lavishly illustrated article offers a fascinating portrait of the performer’s spirited encounter with artists from the continent in newly democratic South Africa.

Although a member of the editorial board of Modern Painters and regular contributor to its pages – “What makes Basquiat’s work so powerful is his transcendence of the black-white posturing and the truly dignified indifference of the existentialist,” offered Bowie – the reason for his SA trip wasn’t strictly journalistic. American Vogue invited the pop star and his model wife, Iman Abdulmajid, to appear in a fashion editorial directed by style maven Grace Coddington and photographed by American Bruce Weber. The Cape Town shoot included Bowie modelling with his wife of three years on a beach in his own clothing.

During their SA visit the celebrity couple mixed with royalty, meeting the singer Miriam Makeba and religious leader and activist Desmond Tutu. Bowie’s Johannesburg Biennale review is illustrated with a photograph of him wearing possibly the least sartorial suit ever for a meeting with Nelson Mandela. But this is simply the back-story.

Bowie’s prose style as a critic is lyrical and darting; it is also unashamedly user-friendly. “Art is not elite anymore,” he told The Times, London, in 1997, while hatching plans to launch his art publishing imprint 21. “We want to keep the writing accessible – the same number of people who go to rock concerts go to museums and galleries.” His art criticism bears this out.

“The very ground is thigh-high with complaint and dissension,” noted Bowie of the scene in SA, “the air thick with hostility and caprice, and underneath this weighty blanket of personal and impersonal agenda lies the artist.” Rather than make his review about this resentment, Bowie’s review summons the great rapture he felt stumbling through the biennale. “The more I walk around, the pricklier my skin gets; my pleasure is heightened moment to moment with the pure exhilaration of sharing in work of talent and undiluted communication. The colour and serious declaration of intent are overwhelming. This is as mind-jarringly moving as any major art-thing I’ve seen, East, West, or Middle, in any year.”

Capable of the hard graft of listening – not just having an opinion – his review quotes the various artists he met in Johannesburg at length. He quotes Joburg resident Kay Hassan, who appeared on Okwui Enwezor’s All the World’s Futures at the 2015 Venice Biennale, saying at the time: “I don’t understand the reason for the Biennale so I don’t want to be part of it.” And Angolan artist António Ole, who last year curated the Angolan national pavilion at Venice, speaking of his fatigue with SA in 1995: “Here in SA they seem to be grappling with identity problems that we in Angola faced 20 years ago. I get impatient. I understand the problems here but the art community is so small that everything becomes a crisis and control becomes master, not work.”

Perhaps it was Bowie’s stature that allowed him to gain the confidence of so many artists, including the neo-expressionist painter Beezy Bailey, who is quoted as feeling “bitter about affirmative action in the visual arts”. Bowie was unmoved by the artist’s complaint. “I’m not sure that I am willing to even remotely buy into this, as I see very little evidence in SA of white-destitute garrets, loaf-of-bread-and-water situations,” he noted. Bowie’s hook-up with Bailey occurred in Cape Town, a city whose “white-picket fence” and “rolling green” he was happy to escape to Joburg from.

“Joburg is an urban nightmare,” wrote Bowie of the host city for South Africa’s first post-apartheid art spectacle. “Blade-runner brutal in its hostile, teeming streets, and really exciting.” This excitement underscores his appraisal of the art he encountered.

Bowie writes elegantly about his enraptured appreciation of “city boy” William Kentridge, then still a local treasure and not the A-grade export commodity he is now. Bowie described Kentridge’s collaboration with SA-born Danish artist Doris Bloom as the “white-heat high point” of his visit. It is not all rapture: “ … some of the nets of this small art community are temporarily thrown toward 1980s New York.” The habit endures. 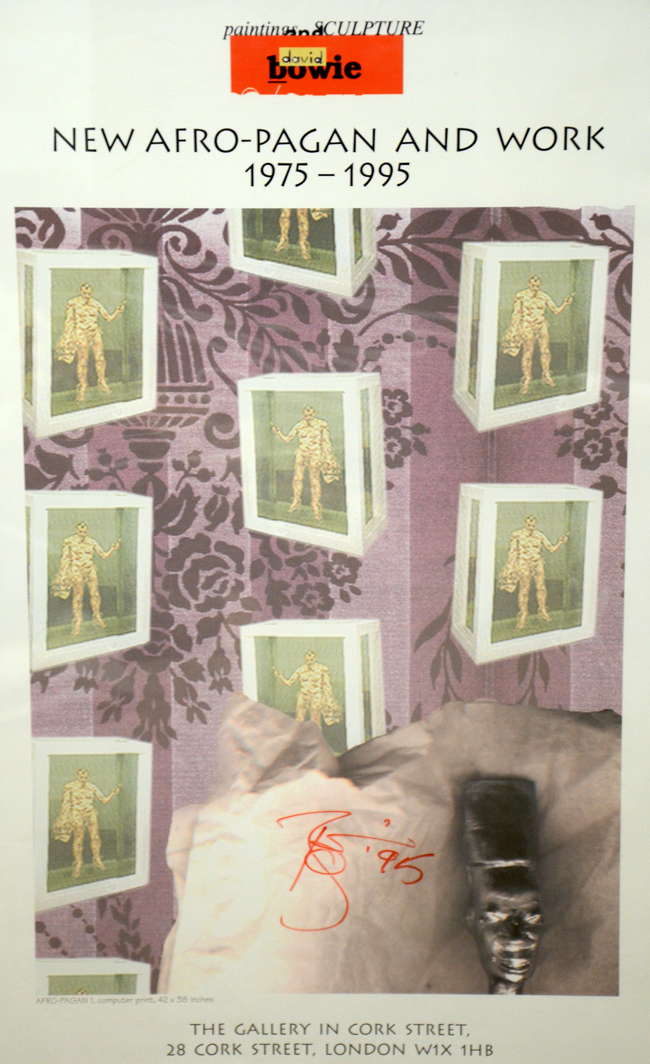 A signed David Bowie exhibition poster for his New Afro-Pagan And Work 1975-1995 at at The Gallery in Cork Street, London, 1995

On his return to London, Bowie convinced his art dealer friend Bernard Jacobson (with whom he launched the art imprint 21 Publishing in 1998) to host a show of new South African art. Titled Mayibuye i Africa and held in late 1995, it included work by Kentridge, sculptors Willie Bester, Norman Catherine and Kendell Geers, and paintings by Penny Siopis, all Goodman Gallery artists. Bowie would have smiled at this. His review noted how a lot of what passed into Europe and the US from Africa passed through a narrow conduit: “Rather than risk the trepidations of travel and discovery on a one-to-one basis, several major modern-African collections have been bought near-complete from the Goodman alone, by mail even.”

Bowie bought works of Catherine. “I keep my little wooden Catherines all over the house,” he revealed in the foreword to Catherine’s 2000 monograph. “He almost occupies the same space in South African art that Eduardo Paolozzi shoulders in British art. Rebellious and just ‘outside’. So, of course, I love him.” Bowie also bought paintings by Siopis and El Hadji Sy; the latter later recounted how pleased he was, because he had bought Bowie’s music for years. Siopis was also a big fan. “I was told at the time that he bought my painting for Iman who was very ‘taken’ by it,” said the artist who never met the performer in person.

Siopis, who was recently awarded the Helgaard Steyn Prize for her 2011 ink and glue diptych Swarm, loved Bowie’s music from the early 1970s, “especially Ziggy Stardust, which I played over and over when I was painting”. She still associates it with the radical student politics of the time, but thinks his influence on art students is overstated, at least in SA. “Some art students got off on him, but it was the philosophy students who were real addicts from what I remember.”